Jump to latest Follow Reply
Menu
Install the app
You are using an out of date browser. It may not display this or other websites correctly.
You should upgrade or use an alternative browser.
Stellaris 46617 Bug Reports 26761 Suggestions 16160 Tech Support 2564 Multiplayer 357 User Mods 4392 Stellaris AAR (After Action Reports) Console edition 1104
Previous dev diary Next dev diary
Show only dev responses

Hello everyone and welcome to another Stellaris development diary. Today's dev diary is going to be about the new music added in Utopia, so I'll start by giving the word to the very man who created it: Andreas Waldetoft, our resident composer.

Utopia Music (Part of Utopia Expansion)
My name is Andreas Waldetoft and I am fortunate enough to be the senior music composer here at Paradox.

From the get go when we started discussing Utopia music and what it should be, we talked about having large scale music. What better way to get that kind of music then with a full live orchestra with synths added on top!.
But why stop there, we extended the brass section with more horns and more low brass. What we ended up with was a rather loud sounding ensemble to say the least.
In fact, we had to record the brass by themselves on a few tunes just because it was hard to hear all the other instruments as the brass leaked way to much in the other sections mics.

We had decided to go for the Budapest Film Orchestra as we had heard they had done a good job on quite a few games already and knew the drill.
This first piece I want to share is a song called “Towards Utopia”, this excerpt section is in the middle of this long tune.

(Music sample: Excerpt from “Towards Utopia”)

I always get impressed when going on these recording sessions, the musicians were really top class. They had to endure gut wrenching long breaths, really weird time signatures and really fast runs for extended periods of time. I was actually surprised at some difficult passages how they nailed it after just a few runthroughs. Thanks to this we actually had time to record some extra stuff which I had written in half a day or so before going to Budapest. This next tune I want to share is one of those bonus songs. I am extra pleased that we got to record this one because it is a lament to one of the greatest scientist Stellaris has ever produced!
The song is called “In Memory of M.R” and it was recorded in one take, 5 minutes before we had to pack up and end the recording session. The musicians had never seen the music sheets before and this is what happened.

(Music Sample: Youtube video of “In Memory of Mercedes Romero”)

I hope you guys will like the new music for Utopia and I can’t wait to do more music for Stellaris when I get time off from all the other games we are doing.

This is a list of the songs included in Utopia with a running time of 24 minutes and 30 seconds:
“A New Dawn”
“Towards Utopia”
“The Imperial Fleet”
“Cradle of the Galaxy”
“In Memory of M.R”


The Music Player (Free Feature)
Thank you Andreas! I also wanted to touch briefly on the Music Player. The Music Player is an in-game tool that allows you to browse the music tracks available in the game and pick specific tracks you want to listen to. It also allows you to set which tracks should be on your playlist, whether they should play sequentially or use random shuffle, and also lets you go back to previously played tracks and skip forward to the next track. In other words... it's a music player, exactly as it says on the tin. 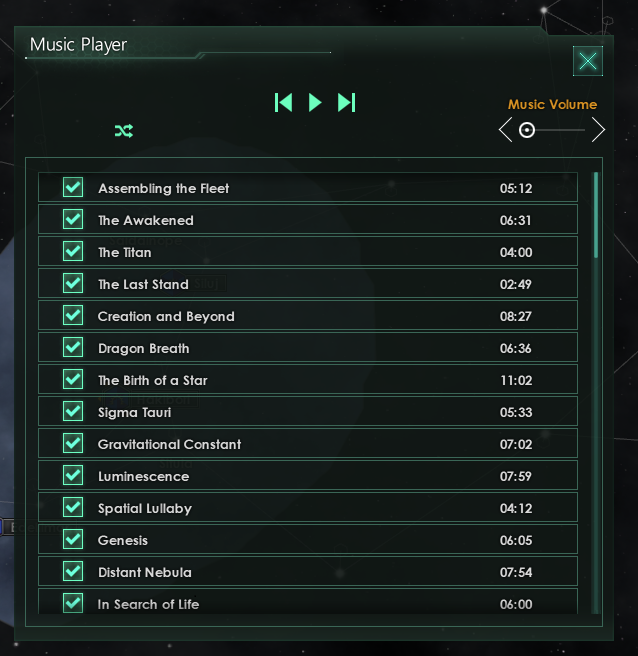 Finally, I'll leave you with a cryptic little note: There's something special that's been added to the audio for Banks by none other than our Audio Director, Björn Iversen, himself. Keep your eyes peeled for it in the patch notes...

That's all for now! Next week we'll start wrapping up the Utopia/Banks dev diaries by talking about colored ships and a few other tidbits.
Last edited: Mar 17, 2017

The music player is a handy addition! Good to see it making its way in all the PDS games.
Toggle signature
User Mod Index: the CK2 User Modification Index for mods, utilities and guides. Post in it to add your new mods or updates.
When the World Stopped Making Sense: developer for this CK2 dynamic & historical Migrational Era mod 476-600 (+) mod created by Enlil - 0.9.13!
Emendatio Historiae Imperatoris: developer for this Imperator: Rome historical and flavour mod.

Finally! I can go through and choose my music! Thanks Paradox!

A moment of silence for M.R., please.

Wow! "Towards Utopia" is a really encouraging theme. I've enjoyed a lot the 'StarTreksque' vibe at the end.

And as a very proud uncle of a little girl learning how to play the violin I've loved seeing all the strings you're using in "In Memory of...". She'll love it too, I'm sure of it.

I don't currently own Stellaris (mostly play CK2), however, the Stellaris soundtrack is one on my favourites within the Paradox suite. Lush, sweeping and inspiring. Almost makes me want to buy the game

Towards Utopia sounds awesome! Please tell me this is a song which plays when we open the game.

Impressive as always when it comes to music from Andreas.
Now comes the question, when do we get the patch notes for Banks/Utopia?

Give up... i burned Beyond Earth, so i not bought thing, but music is great

so SHUT UP AND TAKE MY MONEY!!!!!
Toggle signature
I believe in freedom, Mr. Lipwig. Not many people do, although they will, of course, protest otherwise. And no practical definition of freedom would be complete without the freedom to take the consequences. Indeed, it is the freedom upon which all the others are based. - Going Postal

A very starwarsy vibe from this music. I luv it .

SnakeInATopHat said:
Just going to sit here slightly confused about "in memory of Mercedes Romero" as I didn't discover Stellaris or even Parodox untill late last fall
Click to expand...

Mercedes Romero was a symbolic leader character in the Blorg Stream pre-launch, which many watched in anticipation each week.

I loved the Memorial to Mercedes Romero. I cried a little.
Toggle signature
Genius only pawn in game of life.

Alectron said:
Towards Utopia sounds awesome! Please tell me this is a song which plays when we open the game.
Click to expand...

but... why would I want to disable tracks when they are all awesome?

Wiz said:
I am fortunate enough to be the senior music composer here at Paradox
Click to expand...

Just want to let you I believe we're all fortunate enough that you're the senior music composer at Paradox I don't always have time and brainpower to play PDX games, so I regularly come back after a break of a month or so. Those first notes of music from the themes, be it the vocals from CK2, the strings of EU4, the horns of HOI4, or the synthetic sounds from Stellaris, it always feels great to be back!

Is there a "The Glory of Empress Takama" song too?

I missed adding the teaser for next week's dev diary, fixed now!
Toggle signature
For every complex problem there is an answer that is clear, simple, and wrong.