Hello everyone and welcome to another Stellaris development diary. Today's dev diary is going to be about the Government Rework, the last of the major feature reworks coming in 1.5 'Banks' and some related features in the 'Utopia' expansion.

Government Rework (Free Feature)
With the focus of Banks and Utopia being ethics, internal politics and empire customization, we felt it would be remiss of us not to put in some work in regards to governments. While the old government grid worked alright to give you a broad range of governments to pick from, they were a bit lackluster, not very well balanced and I rarely felt that the government I picked truly corresponded to my own idea of what my empire's society was like. To address all of these issues at once we decided to go back to the drawing board and redo the way governments are constructed completely. In Banks, instead of picking from a preconfigured government, you build your own from Authority and Civics.

In all systems that involve elections, leaders will be elected from the different Factions in your country, and electing a ruler of a particular Faction will significantly strengthen the political clout of that faction and the attraction of their related ethics, so be careful about letting a Xenophile take charge of your Supremacist Empire! 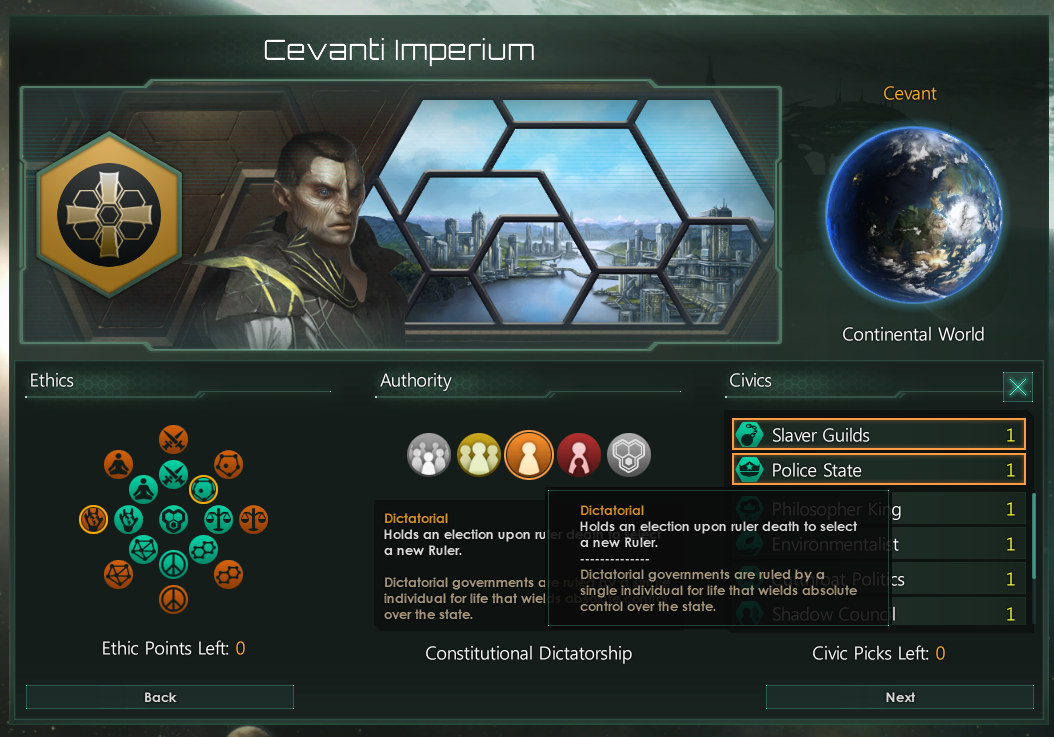 The Civics represent the political and social traditions of your government, and come in a wide variety of types, primarily limited by your authority and ethics. In addition to providing modifiers, they can also change how your empire is governed. For example, the Citizen Service Civic ties citizenship to military service, so that only species with Full Military Service are afforded the right to vote and become leaders. On empire creation, you can choose two Civics, with a third able to be unlocked later through research. 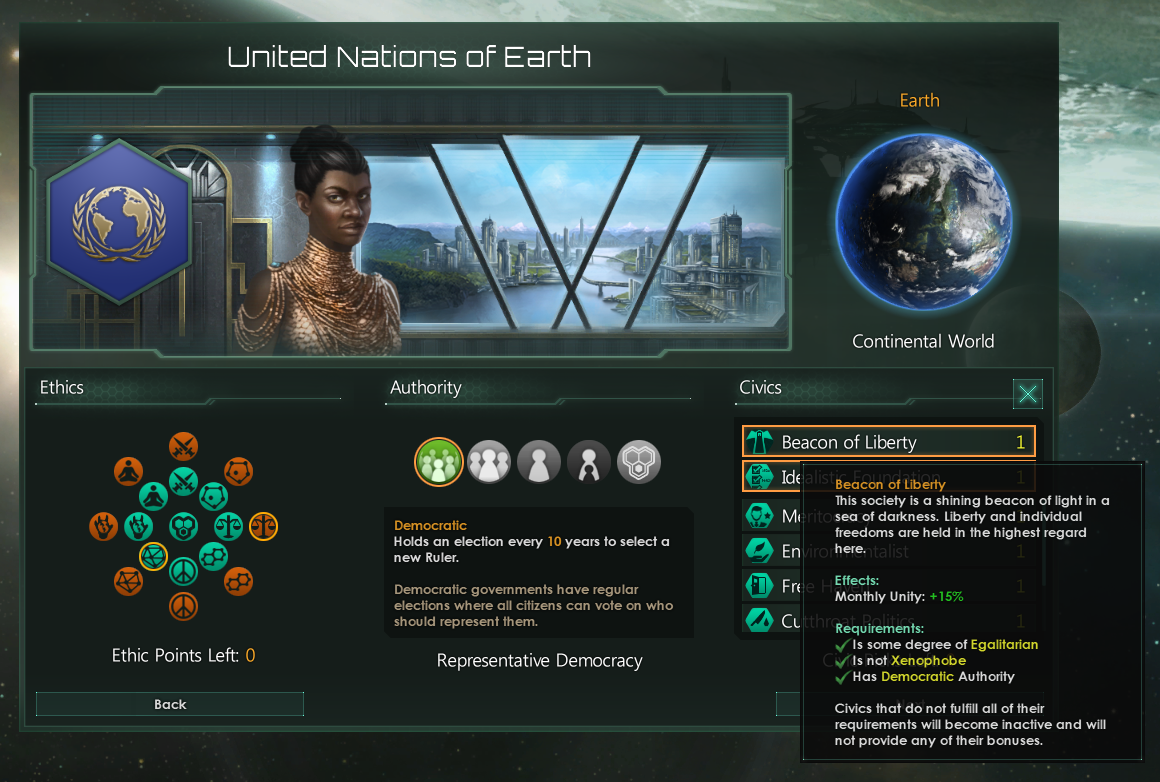 With a few exceptions (more on that below), Civics and Authorities are not necessarily permanent. Where previously you could change your government type for 250 influence, you now have the option to effectively rebuild your government at the same cost. By using the 'Reform Government' button in the government screen, you can add and remove Civics and change Authority from among the picks available to your ethics. As your Ethics and Authority change, you may end up with Civics that are no longer valid for you country - for example a 'Beacon of Liberty' that has lost its Egalitarian ethics. When this happens, the Civic in question will remain, but will become 'inactive' and stop providing you with any sort of bonus, effectively a wasted Civic slot until you reform your government and replace it. 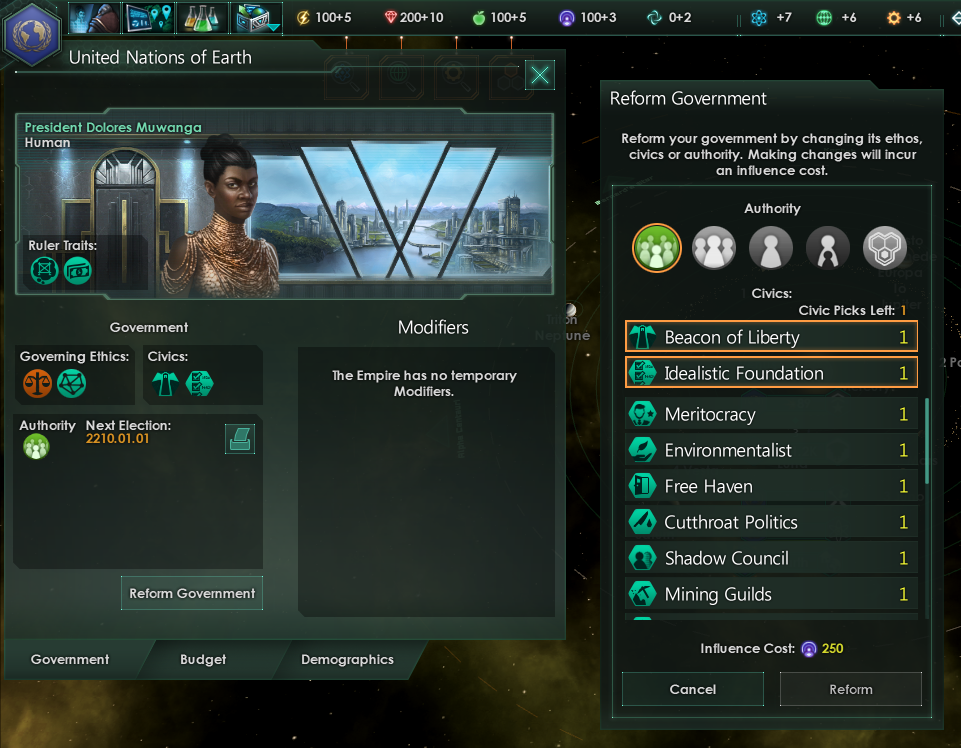 From the Authority, Civics and Ethics you pick, a Government Name is finally generated. The Government Name is purely there to roughly summarize the government you have built, as well as provide flavor, and has no actual impact on gameplay. 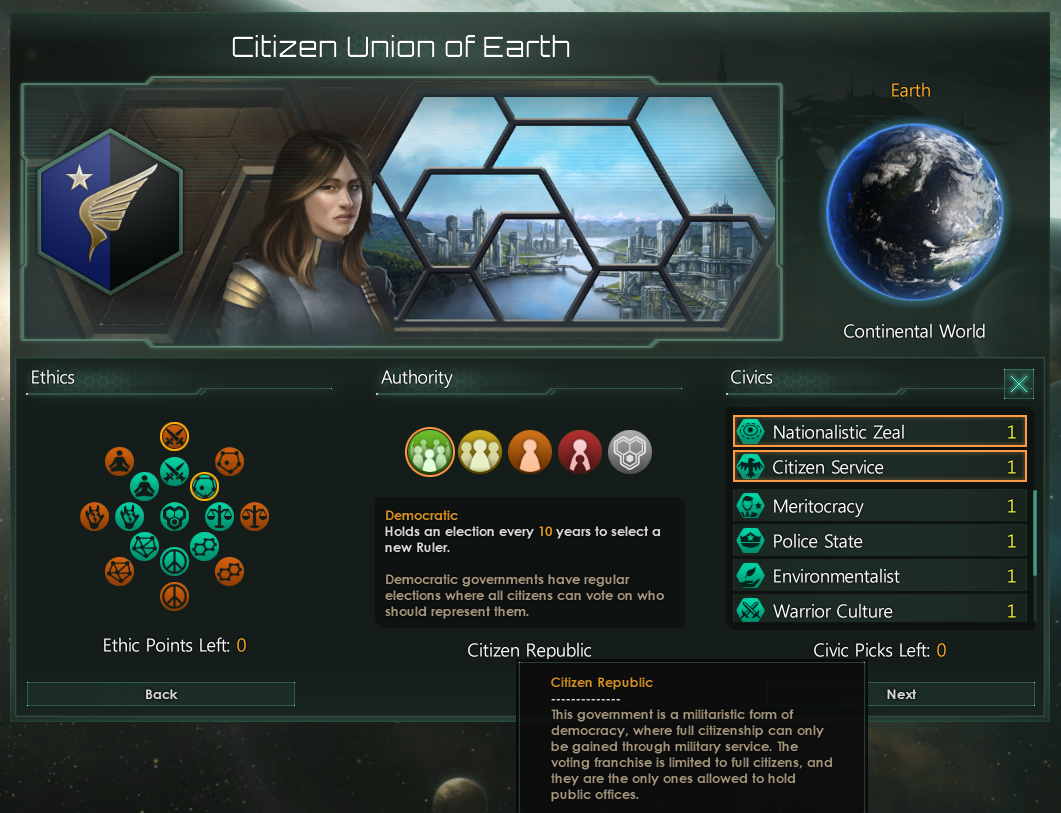 Advanced Civics (Paid Feature)
In addition to the normal Civics available to everyone, there are also a few special Civics that are only available to those with the Utopia expansion. These Civics are meant to simulate very specific kinds of societies and generally have more of an impact on your game than the normal Civics do. They are as follows: 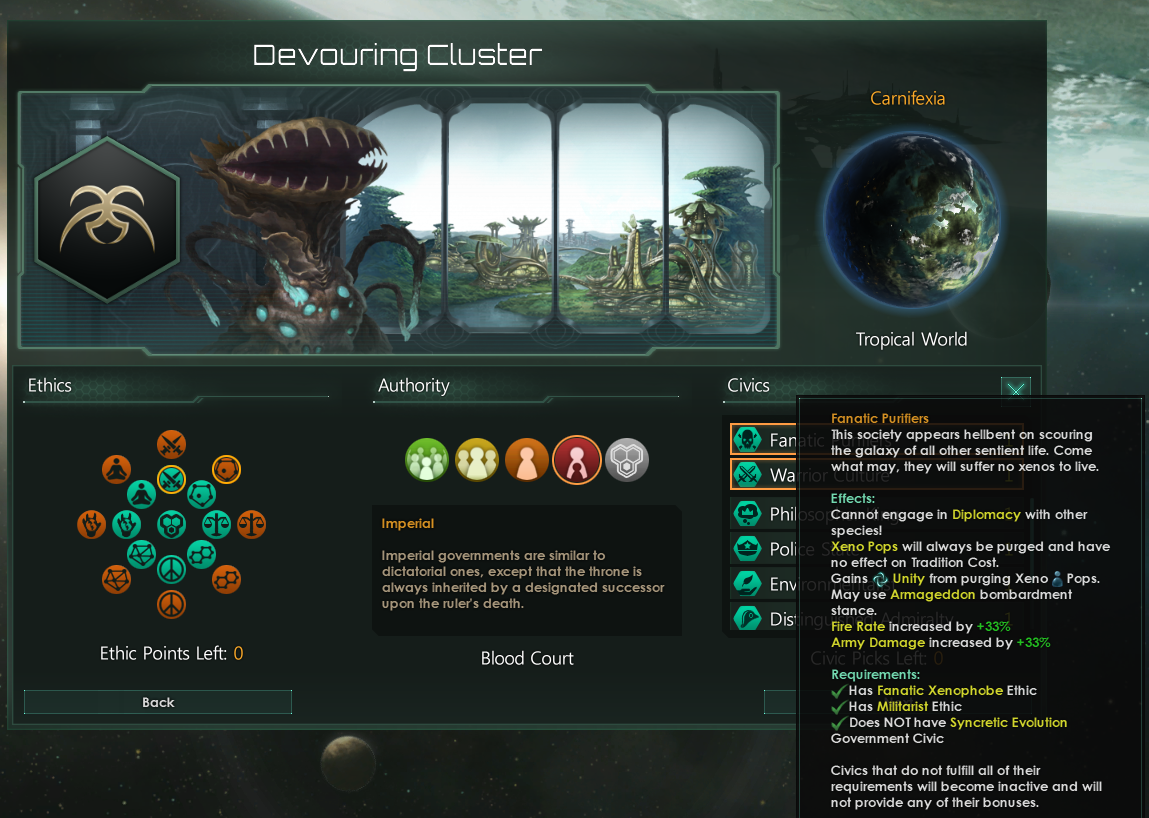 Hive Minds (Paid Feature)
In addition to the Advanced Civics, those with the Utopia expansion also get access to a unique Authority with a highly unique playstyle: the Hive Mind. Hive Minds are species where the individuals are all part of the same, vast, psionically linked consciousness. The Immortal Hive Mind rules absolutely over the population of non-sentient worker drones, using sentient 'Autonomous Drones' (Leaders) to extend the reach of its will. Picking the Hive Mind Authority requires the Hive Mind Ethic and each can only be picked together with the other: With only one, vast and linked consciousness, the guiding values of a Hive Mind is whatever the Hive Mind player wants it to be. They have their own set of Civics that can only be used by Hive Minds, and cannot use any non-Hive Mind Civics. 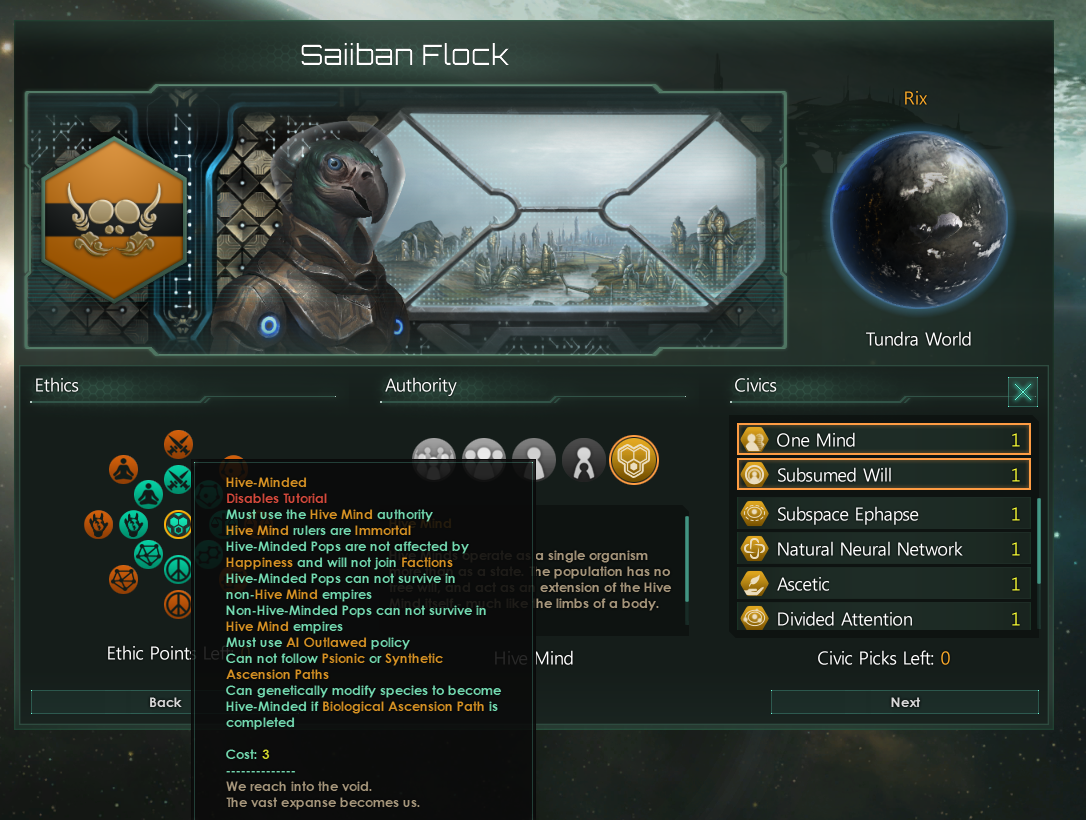 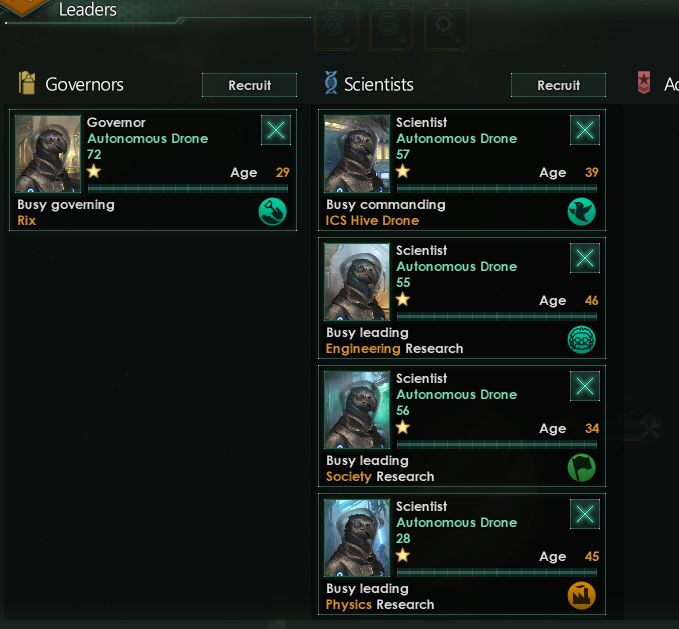 All Pops from the founder species of a Hive Mind will have the Hive-Minded trait. Hive-Minded Pops are not affected by Happiness and will never form Factions, allowing Hive Minds to completely ignore internal politics... though this comes as a cost, as they also cannot benefit from the Influence boost and other benefits provided by happy Factions in a regular empire. As Hive Minds rely completely on their ability to communicate psionically with the drone population, they are also unable to rule over non Hive-Minded Pops, and any such Pops in your empire will automatically be killed over time and processed into food to feed the Hive. Similarly, Hive-Minded pops that end up in non Hive Mind empires will be cut off from the Hive and will perish over time. The only way to integrate Pops between Hive Minds and non-Hive Minds is to use the Biological Ascension Path to unlock advanced gene modding and modify them by adding or removing Hive-Minded (more on this in the next dev diary). However, Hive Minds can still coexist with other species: They have full access to diplomacy and can have non-Hive Mind subjects (and can be ruled over as subjects in turn), though non-Hive Mind empires tend to be somewhat distrustful of Hive Minds on first contact. 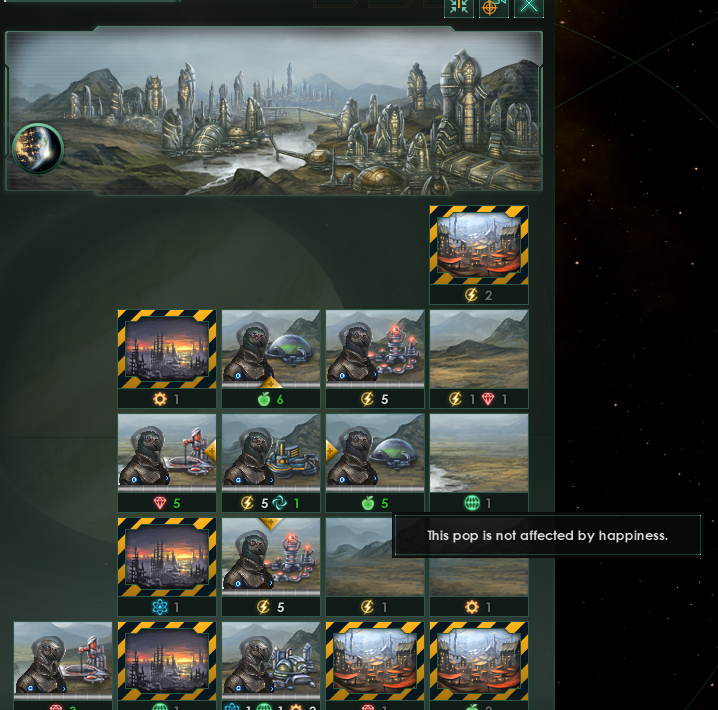 While Hive Minds are psionic by nature, the way they function and their connection to the Shroud is radically different from that of regular psychics, making them unable to follow the Psionic Ascension Path. Furthermore, Hive Minds are deeply biological entities, and fundamentally incompatible with the Synthetic Ascension Path. They are however perfectly suited for the Biological Ascension Path, and can make use of it to assimilate other, non-Hive Mind species into the Hive as described above.

That's all for today! Next week we'll be talking about the Biological and Synthetic Ascension Paths. See you then!
Last edited: Feb 23, 2017
Reactions:

This is awesome! I would rate this as as interesting as Ascention or Megastructures. I can only ask for more in the future. Will there be more?
Toggle signature
Sit now there, and look out upon the lands where evil and despair shall come to those whom thou allied. Thou hast dared to mock me, and to question the power of France, master of the fates of Europe. Therefore with my explorers thou shalt see, and with my spies thou shalt hear; and never shall thou be released from vassalage until all is fulfilled unto its bitter end.

Aweshum! Do mine eyes deceive me, or do hive minds have unique civics choices?
Toggle signature
Genius only pawn in game of life.

"All other regular empires will also have a massive relations malus with you, the one and only exception being Fanatic Purifiers from the same species."

So we can still contact with the same species empire after all.
Toggle signature
Be creator. Be conqueror. Be destroyer. Be savior.
THE CHOICE IS YOURStellaris

Great! I'm looking forward to the new government forms.
Toggle signature
''You have enemies? Good. That means you've stood up for something, sometime in your life.''
Sir Winston Churchill

Saviour of Galaxy said:
"All other regular empires will also have a massive relations malus with you, the one and only exception being Fanatic Purifiers from the same species."

Two Fanatic Purifiers from the same species will actually have a huge relations boost with each other, though that will only ever really happen if the player makes it happen.
Toggle signature
For every complex problem there is an answer that is clear, simple, and wrong.

What will the Hive mind AI personality do? Obviously the player's values can completely replace the need for ethics and as you can't have non-hiveminded pops they won't have opinions about policies, etc, but how will AI hiveminds act diplomatically? What do they approve/disapprove of? Do they care about genocide? I assume they don't care about migration/voting rights but what about bombardment?

One question, though: Will there be any consequences for changing your Authority (say, from Democratic to Imperial, etc.)?

Does that mean that instead of unlocking advanced government forms which doubled the government boni, we now simply get a third civic, but no boni to the ones we already picked?

oh my blorg this is only getting better and better, I smell a release date coming not that far away.

... somehow this ended up being a rather dull dev diary, probably because everything said was already known by teasers in one form or another.
Except maybe the 3rd slot part.
Toggle signature
Greetz, Alblaka

good and we get the other ascension next week, good good.

Yes, and have to abide by truces. Doing it otherwise would break the game in half right now, but we plan to look into the war system in the future in general.
Toggle signature
For every complex problem there is an answer that is clear, simple, and wrong.

What about spread of ethics? If AI can have hive minds, is there some kind of limit how many hive mind empires can spawn or could you get unlucky and half of the galaxy has same hive mind AI personality? What about fanatic purifiers, will they be rarer now?