Jump to latest Follow Reply
Menu
Install the app
You are using an out of date browser. It may not display this or other websites correctly.
You should upgrade or use an alternative browser.
Stellaris 44671 Bug Reports 24406 Suggestions 14468 Tech Support 2363 Multiplayer 345 User Mods 4259 Stellaris AAR (After Action Reports) Console edition 1035
Previous dev diary Next dev diary
Show only dev responses

Hello everyone and welcome to another Stellaris development diary. Today's dev diary is going to be about a few different features coming in the Utopia expansion and associated Banks update: Native Indoctrination, Unrest and Faction Interactions.

Native Indoctrination (Paid Feature)
Anyone who's ever accidentally enlightened Fanatic Purifiers should be well familiar with the perils of not checking the ethics of a primitive civilization before deciding to enlighten or infiltrate them. In Utopia, we've added a new tool for players to interfere with primitive civilizations: Indoctrination. Indoctrination is a new observation station mission that allows you to 'educate' primitives in your clearly superior way of thinking. While active, it will greatly increase the attraction of your Governing Ethics for the Pops on the primitive planet, and cause them to drift towards those ethics over time. As the Pops start changing ethics, the Governing Ethics of the primitive ciivlization will change along with them, and you will be notified that your mission is making progress. Given enough time to do its job, this mission will eventually cause the primitive civilization's ethics to precisely mirror your own. The Indoctrination mission requires the Active Native Interference policy and so will be available to all ethics. 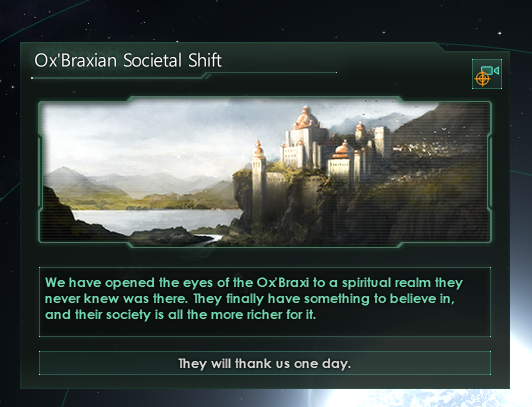 Unrest (Free Feature)
Back in Dev Diary #54 we talked about the ethics and faction rework, and mentioned that details on how rebel factions work would come later. After some testing and iteration, we ended up deciding that the new faction system didn't really fit the old rebel style of faction, and consequently separated it into its own system called Unrest. Each planet has an Unrest value from 0 to 100 determined by local conditions and, sometimes, empire-wide effects. Unrest is primarily increased by unhappy Pops and decreased by happy Pops and the presence of garrisoned armies. Free Pops, happy or not, will have a higher effect on Unrest than enslaved ones, representing their ability to better organize against their 'oppressors'.

Unrest has directly detrimental effects on the planet's ability to produce resources, and can also result in a number of different events depending on the severity on the situation. The effects of such events are primarily political, with your population turning towards a particular ethic or against a government that is unable to protect it from violence and terrorism. However, Unrest can also turn more serious when it is coupled with the presence of a particularly discontent or oppressed group, such as an enslaved underclass or a nationalist movement. When such a group begins to organize, you will get an event warning you of the situation that gives you some time to try and get the Unrest under control. If you fail to do so, the situation will escalate, resulting in events of increasing severity such as hunger strikes, riots, and possibly even a full-blown armed revolt. 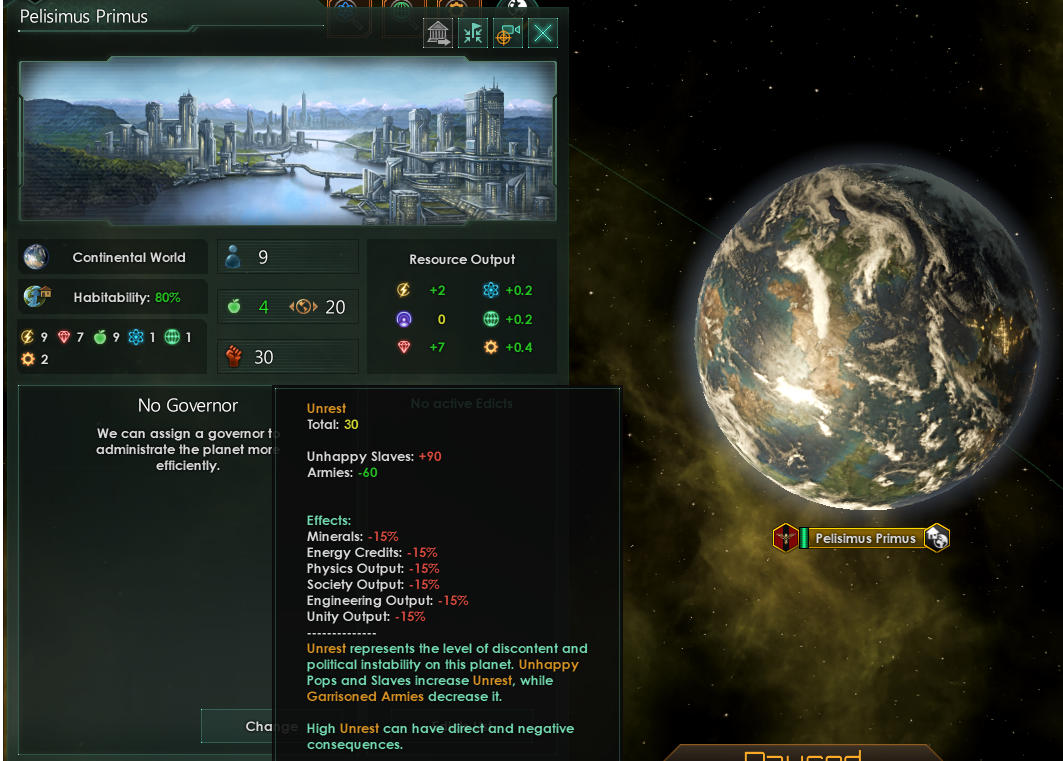 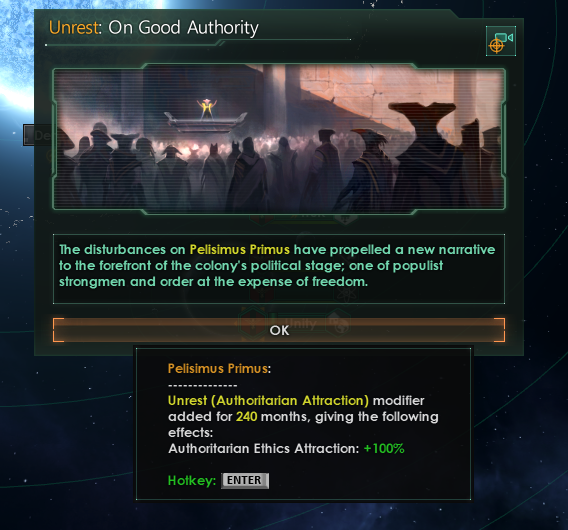 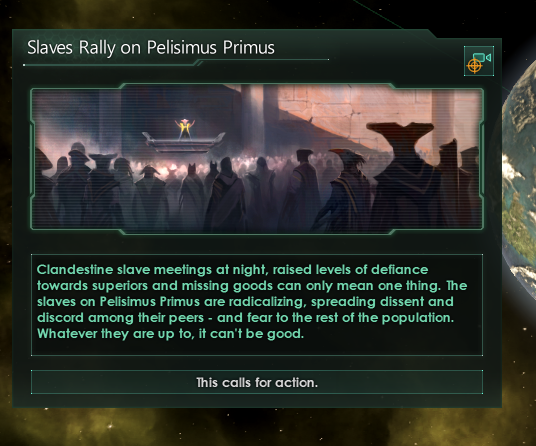 Faction Interactions (Free Feature)
Also mentioned in Dev Diary #54 was the ability to use Factions to shift your Governing Ethics. The new Faction Interaction system allows you to both influence which Ethics will take root in your empire, as well as change your Governing Ethics when a particular Ethic grows strong enough. Each Ethic has at least one associated faction, such as the Supremacist Faction for Xenophobes, and by promoting or suppressing that faction you can spend a monthly influence cost to increase or decrease the attraction of its associated Ethic across your empire. If a faction grows strong enough, you can also Embrace that faction, shifting your Governing Ethics to more closely align with theirs.

In most cases, shifting your Governing Ethics will involve moving a single step towards that ethic, for example moving from Xenophobe to Fanatic Xenophobe or from Fanatic Xenophile to Xenophile if shifting towards Xenophobe. As this will typically result in having too many or too few Governing Ethics, it will also automatically adjust your other ethics to follow the 3 ethics points rule, downgrading, upgrading, removing or adding ethics as necessary. Which ethic is lost or added is determined by attraction, so if you are Spiritualist, Xenophobe and Authoritarian and make a shift towards Militarist, whichever of Spiritualist, Xenophobe and Authoritarian has the lowest attraction in your empire will be lost as a Governing Ethic. 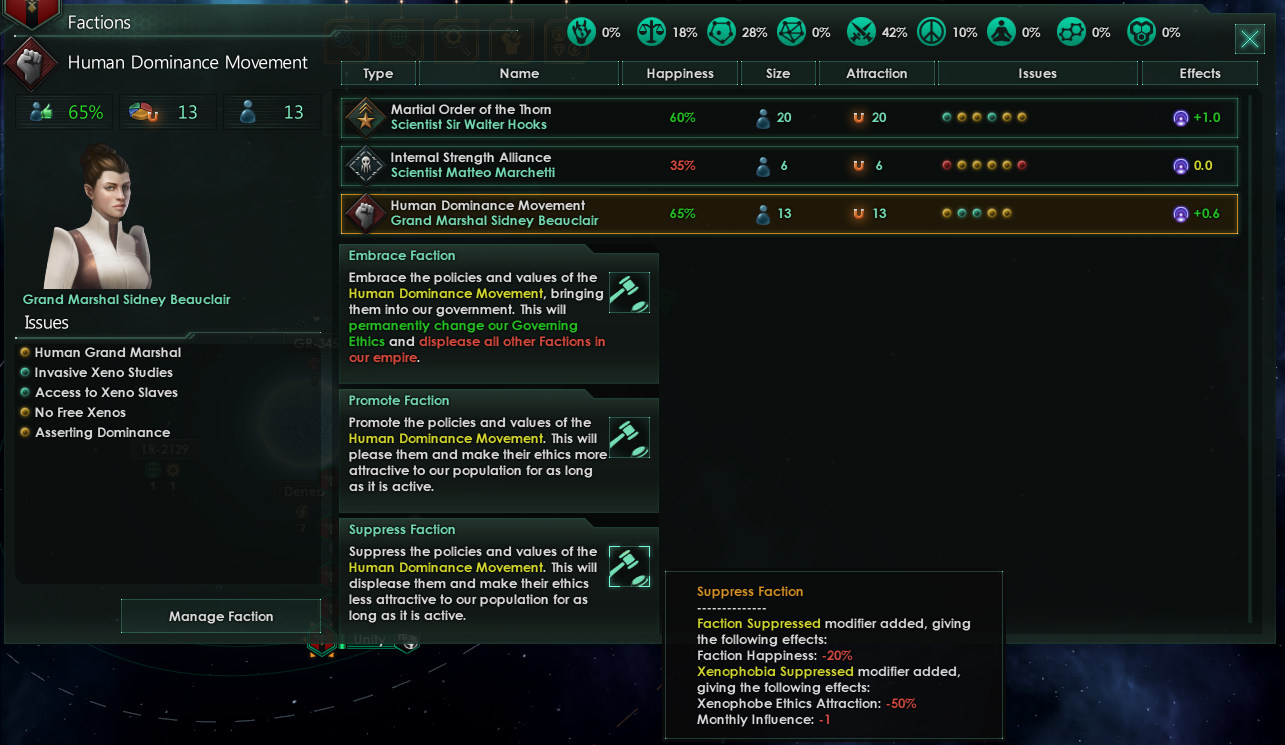 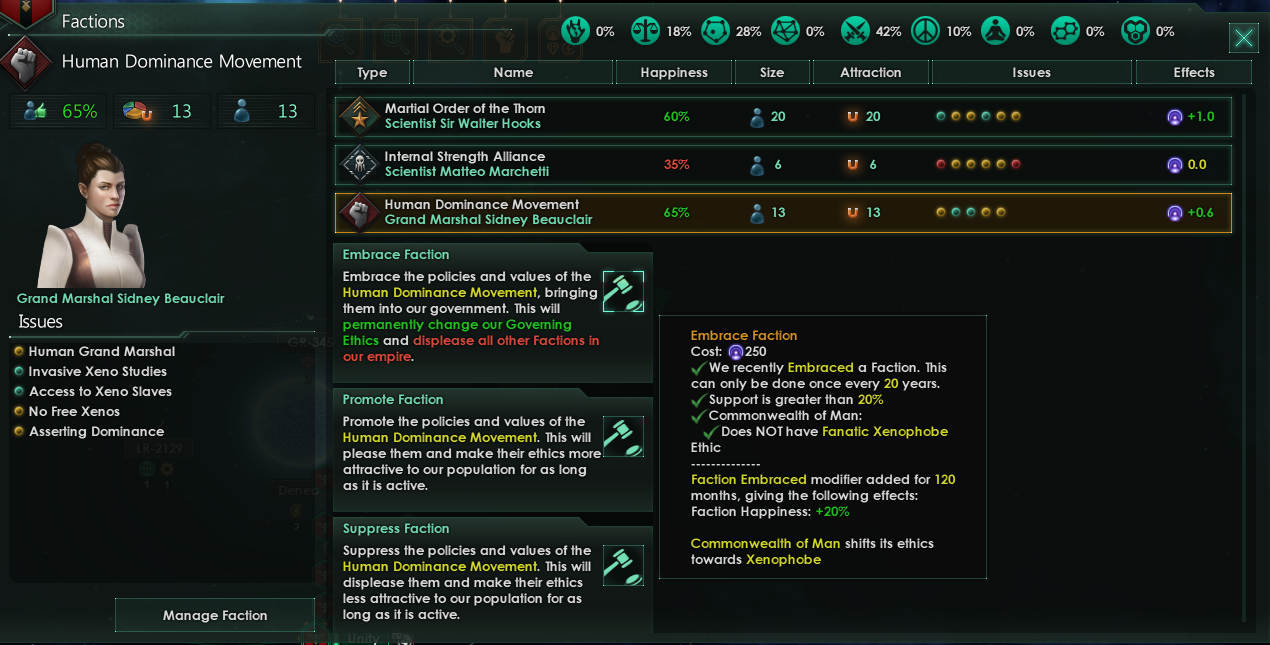 That's all for today! Next week we'll be talking about the last of the major feature reworks coming in Banks: Government and Civics.

question can we learn about the other two acentions please?

Will there be dev diaries about Bio and Synth Ascension like the one about Psionics?
BTW Do different kinds of slaves generate different amount of unrest?

Looking forward for Hive minds then.
If you also add a Cybernetic phenotype or skin, I can make the Borg! \o/

So if I set up a custom empire to play a certain style, I could be forced to change my ethics and have to play a style I have no interest in playing? Or end up with endless revolts?

I hope not. We don't need a 'Dutch revolt' where you have to have a very specific set of conditions to avoid getting your country (empire) wrecked.

There're 9 ethics on screens! How is the new one called?

Milten said:
Will there be dev diaries about Bio and Synth Ascension like the one about Psionics?
Click to expand...

Brucesim2003 said:
So if I set up a custom empire to play a certain style, I could be forced to change my ethics and have to play a style I have no interest in playing? Or end up with endless revolts?

I hope not. We don't need a 'Dutch revolt' where you have to have a very specific set of conditions to avoid getting your country (empire) wrecked.
Click to expand...

I have no idea how you took that out of the dev diary. You can suppress ethics you don't like, and keep unrest down with armies, buildings, etc.
Toggle signature
For every complex problem there is an answer that is clear, simple, and wrong.

I love the level of detail and ever increasing depth of the game we are getting here. Great work.

Hmmm look at the last picture and then at ethcis what is that one on the far right? Upper right corner.
Holy jesus.
What the fuck is that?
WHAT IS THAT PRIVATE ANWARD?

Wiz said:
The Indoctrination mission requires the Active Native Interference policy and so will be available to all ethics.
Click to expand...

Does that include Fanatic Xenophiles? They're currently restricted to passive studies and are very sad about it :C
Toggle signature
Member of Team Nessassity [Stellaris Mod Collection] [CK3 Mod Collection]

Ninth ethics! Tell us! Tell us now!
Toggle signature
Sit now there, and look out upon the lands where evil and despair shall come to those whom thou allied. Thou hast dared to mock me, and to question the power of France, master of the fates of Europe. Therefore with my explorers thou shalt see, and with my spies thou shalt hear; and never shall thou be released from vassalage until all is fulfilled unto its bitter end.