Jump to latest Follow Reply
Menu
Install the app
You are using an out of date browser. It may not display this or other websites correctly.
You should upgrade or use an alternative browser.
Stellaris 46901 Bug Reports 27030 Suggestions 16446 Tech Support 2588 Multiplayer 358 User Mods 4420 Stellaris AAR (After Action Reports) Console edition 1124
Previous dev diary Next dev diary
Show only dev responses

Hello everyone and welcome to another Stellaris development diary. Today's dev diary is going to be about psionics and one of the three ascension paths mentioned in Dev Diary #56: the Psionic Ascension Path.

Psionics
First, before we start digging into the way psionics will work Utopia, we should clarify that we are not removing any features from the free version of the game. If you have the Banks update but do not own Utopia, psionics will continue to work the same way they currently do: As technologies that you unlock. The only difference is that psionics can now only be researched by Spiritualist empires, though it is entirely possible for an empire that does not start out as Spiritualist to acquire psionics by shifting their empire ethics to Spiritualist over the course of the game, and once you start down the Psionic path it is possible to continue along it even if you stop being Spiritualist. This Spiritualist requirement applies whether or not you own Utopia.

If you *do* own the Utopia expansion, most of the psionic features will no longer appear as technologies. Only Psionic Theory, the very first psionic tech, is still researchable. To get access to the rest of the psionic path you will need to pick the 'Mind over Matter' Ascension Perk to start your empire on the Psionic Ascension Path. Picking this Ascension Perk will unlock latent psionic abilities among your primary species. A certain percentage of your leaders will have the 'Psychic' trait that grants a variety of advantages for the different leader classes, you will get access to Psionic Armies and also the special Psi Corps building. As with all Ascension Paths, you will need to have at least two Ascension Perk slots unlocked to pick 'Mind over Matter'.

After picking Mind over Matter, you will need to continue amassing Unity and working your way through the Tradition trees. Once you have unlocked your fourth Ascension Perk slot, the 'Transcendance' Ascension Perk becomes available. This is the second stage in the Psionic Ascension Path and represents the full Psionic awakening of your species. From this point on, your entire species will get the 'Psionic' species trait and all leaders from this species will be full-fledged Psychics. In addition to the advantages granted by these traits, from now on there is also a chance that other species in your empire will psionically awaken, first as latent Psychics and then as fully awakened ones much like your own. 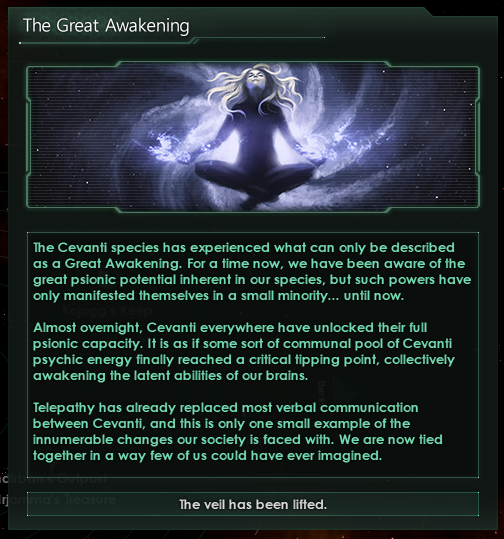 The Shroud (Paid Feature)
Not long after fully awakening, your species will become aware of The Shroud. The Shroud is the realm from which psychics draw their power, a strange dimension very unlike the material universe, a place of opportunity and danger alike. To begin exploring The Shroud, you will need to complete a special society research project that once completed will give you access to The Shroud in the contacts view. Each time you wish to enter The Shroud you will need to expend a considerable amount of energy (in the form of Energy Credits), though this cost can be reduced by having access to the Zro Dust Strategic Resource. 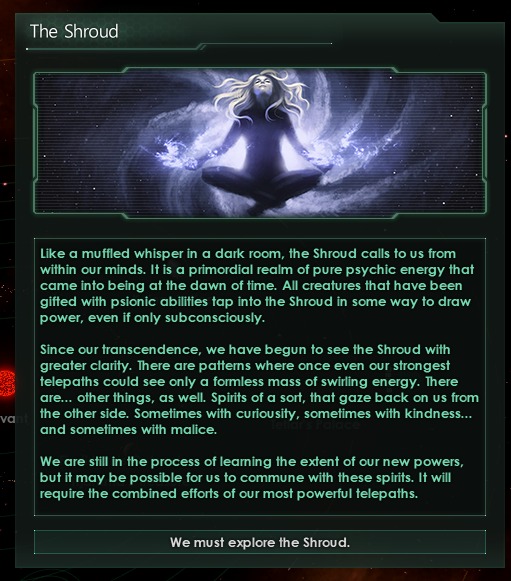 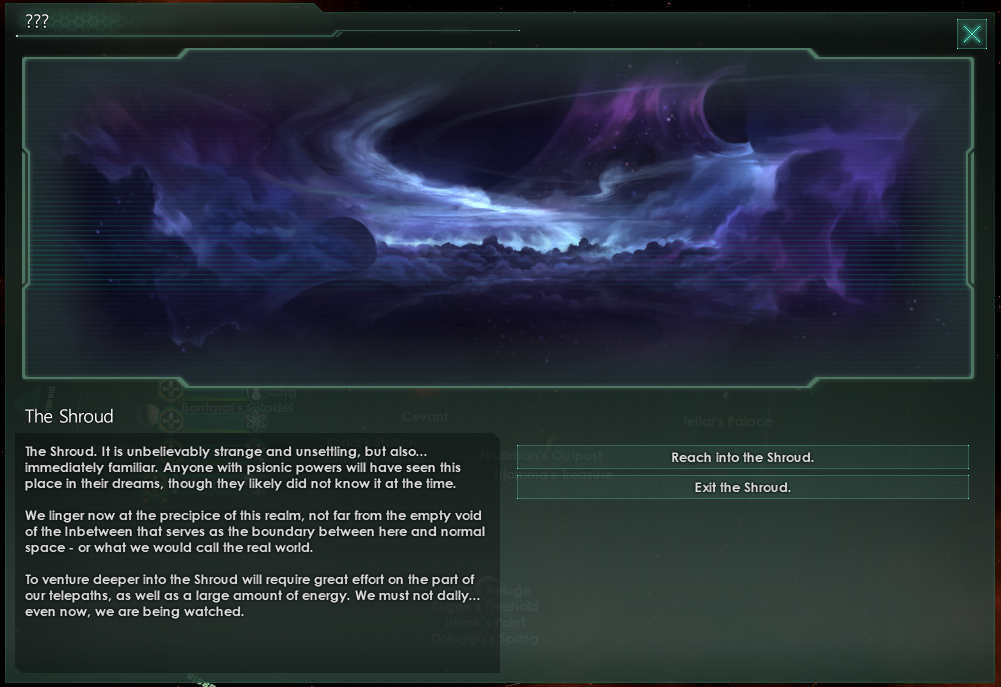 As for what can happen while exploring The Shroud... quite a few different things. We will not give them all away here, but some examples include unlocking psionic technologies, asking the spirits that dwell there for a boon, or even forming a Covenant with one of a number of particularly powerful spirits... a pact that will give great benefits, but may come at a terrible cost. 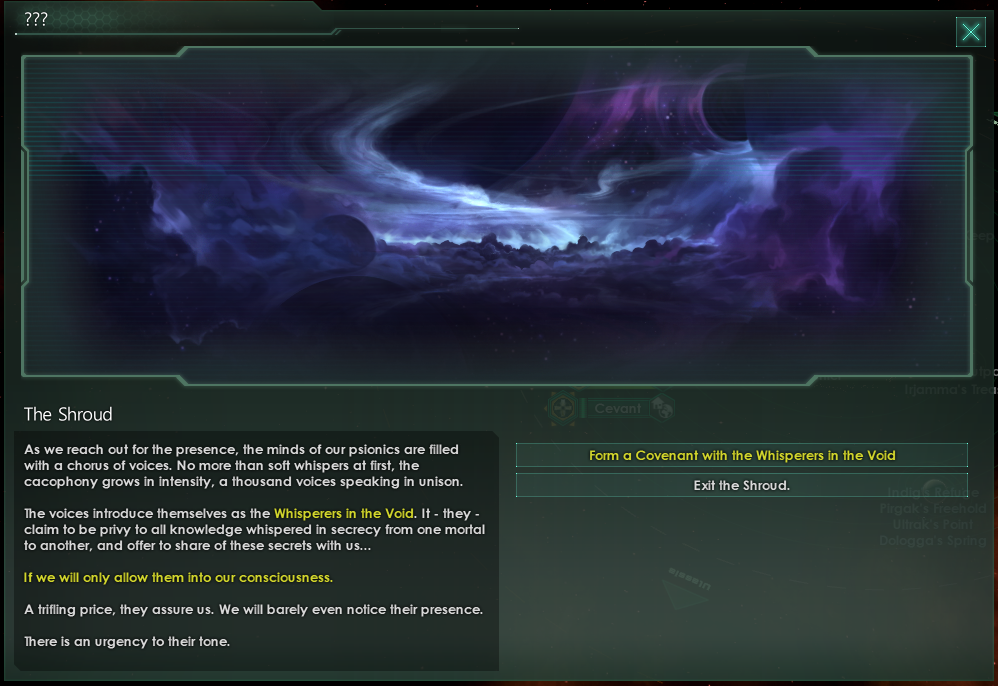 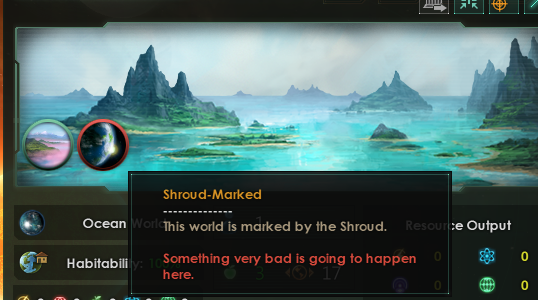 That's all for today! Next week we'll be coming back to Factions and how you can use them to change your Empire Ethics. We'll also be talking about Indoctrination. See you then!

Stellaris on release was arguably the Paradox game with the least soul/character... And its shaping itself to be the one with the most, and so quickly!

Please release Utopia next week pretty please????
Toggle signature
"Remember, Foster, the mad Roman Emperors had themselves proclaimed gods, and inflicted unspeakable horrors on their subjects, but the sane ones were proclaimed gods too, and they did fine."
- Cornel MASON
(Ada Palmer, Seven Surrenders)
H

Very nice! Will machine and biological ascendancy eventually be covered too?

Looks amazing! Seems like its going to take a while to get these bonuses but they also seem really strong. Very excited for this dlc!

Will subspecies of our primary race get telepathy with the first or second perk?

Finally I can fully compete with my Materialist Rival

I sense Chaos Gods and The Warp from Warhammer 40k

Always great to see more immersion! Thanks.
Toggle signature
''You have enemies? Good. That means you've stood up for something, sometime in your life.''
Sir Winston Churchill

I really hope that a Shroud-affiliated species can destroy themselves by summoning a Shroud endgame crisis - maybe in the form of a very strong Shroud entity. But you'd have to be a silly space elf to be so naive....

Also, will certain guardians interact with the Shroud?

Hehehehe... someone has been reading too much Warhammer 40k.
J

Awesome. How much does this change the game once you have unlocked it? Is it just some potential bonuses and units or more of a fully fledged mechanic?

Haha so you can put horror marks on entire planets.

Great Stuff! The Demons of the Warp are waiting for us...
I

Good to know that you cant start ascension with your first perk.

Now that Mind over Matter is off the table, I wonder what will get picked in todays livestream.

..and even more Warhammer 40K references! Though I'll admit that spiritual realm is a popular concept in both Sci-Fi and Fantasy, description sounds somewhat familiar, especially with the Magnus the Red storyline.

so spiritualist get their own ascension thingy? Will the other two ascensions also be ethics exclusive?
J