Jump to latest Follow Reply
Menu
Install the app
You are using an out of date browser. It may not display this or other websites correctly.
You should upgrade or use an alternative browser.
Stellaris 47817 Bug Reports 28042 Suggestions 17224 Tech Support 2662 Multiplayer 363 User Mods 4462 Stellaris AAR (After Action Reports) Console edition 1141
Previous dev diary Next dev diary
Show only dev responses
Hi folks!

Today, we moved into our brand new offices so things have been a little hectic in Paradox land. The new building is great, but I will always miss the spectacular view of Stockholm from the 24th floor of "Skrapan"...

No rest for the wicked though, so let's talk a bit about the role that characters play in Stellaris. First off, this game is not character based like Crusader Kings, so do not expect a complex web of rivalries and friendships to develop between rulers and leaders with dynamic portraits and genetics. In Stellaris, the real stars of the show are the Pops, with characters acting more like the advisors, generals and admirals in Europa Universalis (though they do have certain personality traits that can affect what options they get in scripted events, for example.) With that out of the way, let's examine the different types of characters:

Scientists can be put in charge of one of the three research departments (Physics, Society or Engineering.) They can also be assigned to captain the Science Ships you use to explore the galaxy. These are all topics for upcoming dev diaries... Suffice it to say that their skill levels and personalities will have clear effects on their tasks. They are also valid ruler candidates in technocratic societies (government types).

Governors can either lord it over a single planet or an entire sector (more on sectors later). They are a very useful way of keeping the populace happy, or increasing the efficiency of a rich and powerful planet even more. Governors are valid ruler candidates under many government types.

Admirals, though they are not mandatory, can give a clear edge to your military fleets, which is pretty straightforward. They are valid ruler candidates in militaristic societies.

Generals lead your armies in defense of your planets against invasion, or when invading the planets of your enemies. Like Admirals, they are valid ruler candidates in militaristic societies. 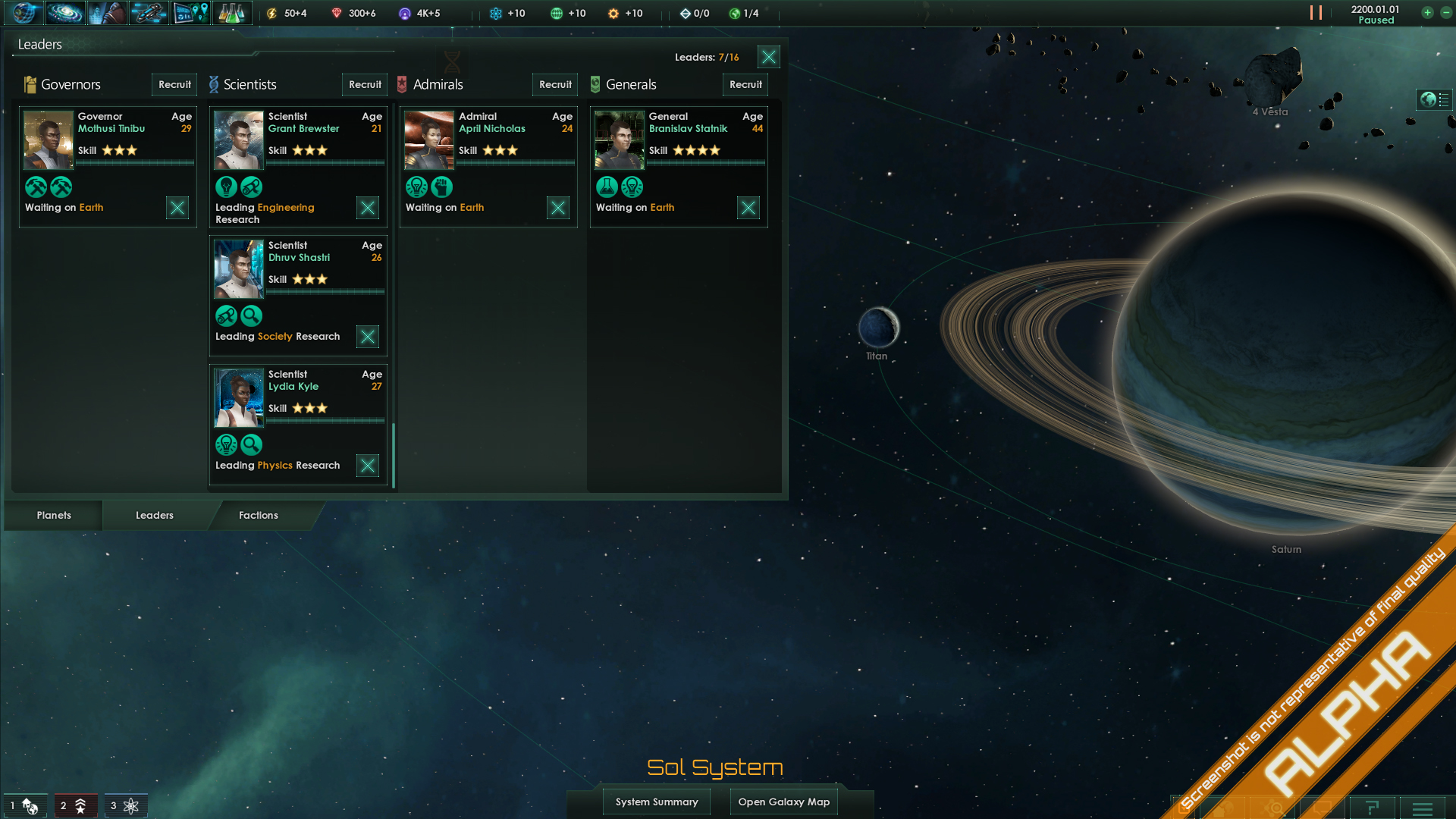 Rulers give bonuses to entire empires, and, since other leader types can be elected ruler, they typically have a secondary skillset as well. Ruler type characters can also lead Factions; such characters are not recruited by you and cannot be ordered around. Factions and their leaders are, again, something we'll cover in detail later on.

Most leader types are recruited using Influence (a type of diplomatic "currency" in the game) and there is a cap on the total number of leaders you can employ, so you will need to weigh your need for Admirals against that for competent Governors, etc. Although all leaders tend to gain experience and become more accomplished over time, they do not live forever. The day will come when they perish and will need to be replaced… 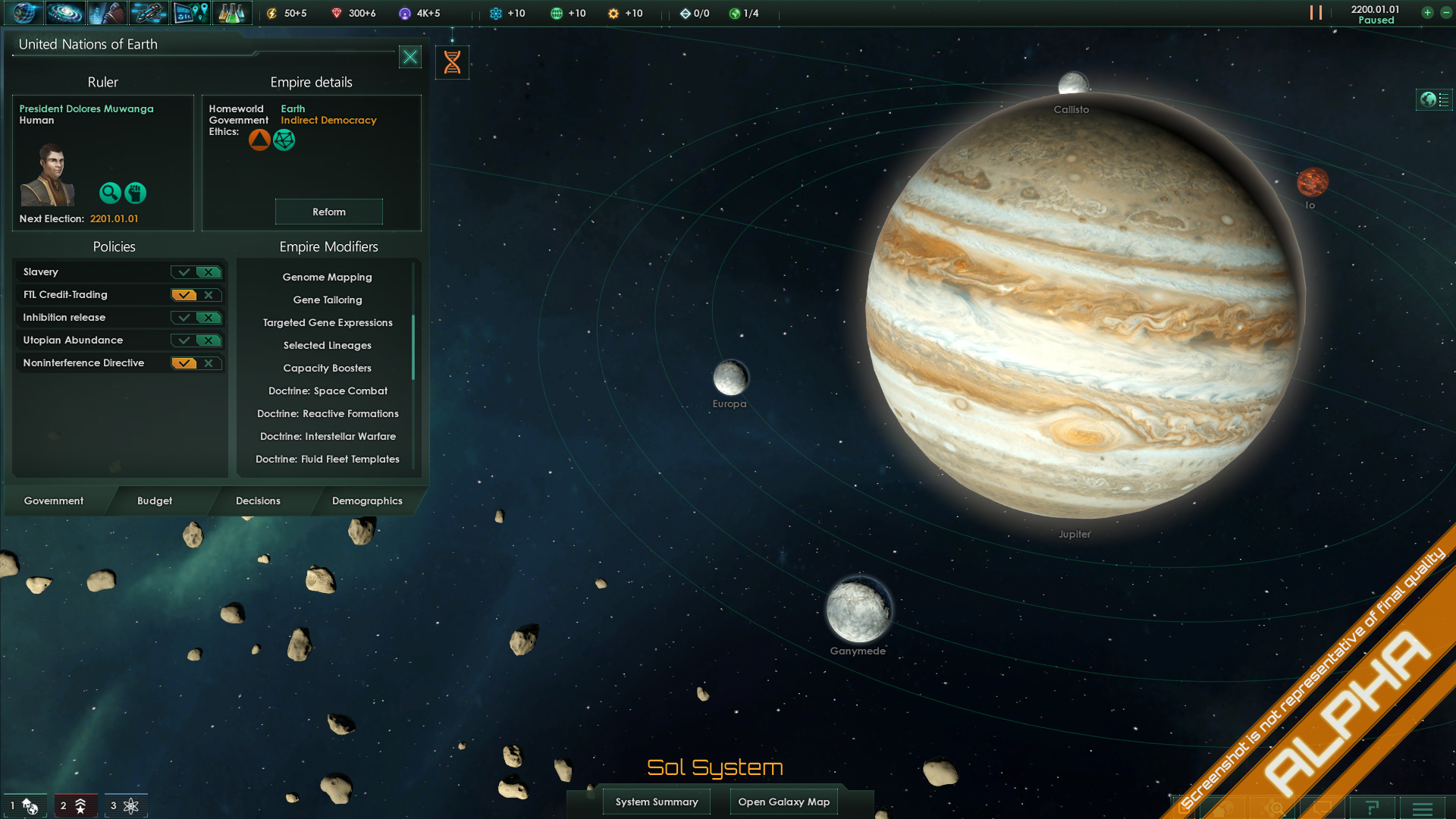 Now, as you remember from last week’s diary, there are about a hundred different alien race portraits in the game. Thus, we initially felt that lesser leaders should not have actual portraits, because we could not possibly produce enough of them to provide the requisite variety. But then, the artists started to experiment with different backgrounds and clothes, which thankfully proved sufficient to allow all leaders to show a portrait.

The different types of leaders all use different sets of clothes. This helps increases variety, but also reinforces their role, with admirals having a militaristic uniform, governors being more casually dressed, and scientist being a bit more techy. Clothes are shared between some of the more similar species, because creating five unique apparels for each species is just an enormous amount of work. (Not all species wear clothes though; it would be odd if this was every alien race’s custom.)

I expect that humans will be by far the most popular race to play. Therefore, they are getting some special attention with different ethnicities, genders and hair styles. There is nothing stopping modders from doing the same for other races, of course! For example, the system could easily be used for other things, like an insect race where you have a multi tiered system, with one appearance for the ruler, a completely different morphology for your Pops, and a third for your leader characters...

Great to see a new dev diary! I understand things were hectic while moving.
Toggle signature
User Mod Index: the CK2 User Modification Index for mods, utilities and guides. Post in it to add your new mods or updates.
When the World Stopped Making Sense: developer for this CK2 dynamic & historical Migrational Era mod 476-600 (+) mod created by Enlil - 0.9.13!
Emendatio Historiae Imperatoris: developer for this Imperator: Rome historical and flavour mod.

Great DD. I imagine this will be covered, but I hope you can assign planets to a particular sector, particularly with a skilled governor
Toggle signature
If you're a modder and think a Fallout mod for HoI4 would be interesting, see my thread about it here
Reactions:

f5 key broken, but was worth it
Reactions:

Yay! Thanks for posting on such a busy day!
Reactions:

Doomdark said:
In Stellaris, the real stars of the show are the Pops
Click to expand...

Toggle signature
Everything is probably fine.

Also, France must be destroyed.
Reactions:

Not too sure I'm keen on a limited number of 'characters' that I can pick to captain a singular ship. It creates a bit of a dissonance for me that will make me think "Well what about all the other ships...what about their captains?"
Reactions:

Can we customise leader names et cetera when recruiting them?
Reactions:
M

Is it possible to have some of the positions (certainly Ruler and maybe Governor and Scientist) be inherited depending on your Government type/Species ethics? In other words they get automatically replaced upon death of the previous leader.
Reactions:

Very interesting DD. Now I'm not only hyped for hoi4 and the cossacks , but also this!
Toggle signature
Story of the Little Kingdom - Wales Ck2 AAR (Finished)
WritAAR of the Week: 5th November 2017

Those policies and empire modifiers look very interesting, I like.

I also like that different character types have more or less opportunities depending on your society.
Reactions:

Admiral at the age of 24! That must be a hell of an admiral!
Reactions:

Interesting DD. A couple of question?

Can you have characters defect or be 'encouraged' to switch loyalties?

Finally, if you have an alien POP somewhere in your empire can it generate leaders if you are sufficiently tolerant towards other species?

Great stuff so far.
Toggle signature
"Too often Fate,
by all abhorred,
to savage poison,
adds the sword."
- Boethius, The Concillations of Philosophy
Reactions:

So many things I read that were to be talked about later but worth it!

Will there be life extension technologies which allow your leaders to live longer?
Toggle signature
BlueThing from the HBS Battletech game forums.
Reactions:

Would it be possible to edit the name pool or the selection of character portraits?

How about empires with mixed species demographics? It would be awesome being able to choose which aliens appear as leaders, and that can even be tied into game mechanics for whatever system will cover 'accepted cultures' in Stellaris
Reactions:

That is it he manliest looking Dolores I have ever seen.
Toggle signature
Elf Kill Count: 0 (Awaiting Runemaster)
Reactions:

Well this opens up more info about the stuff from last week. The humans seem to be xenophiles and fanatic indivdualists, and they're using the "Indirect democracy" government. I think that may be enough to fill out the whole democracy tree then: (Military Democracy); (Theocratic Democracy); (Direct Democracy); Moral Democracy; and Indirect Democracy.
Toggle signature
BLOOD FOR THE BLOOD GOD! SKULLS FOR THE SKULL THRONE!
Team Lead for Warhammer: Geheimnisnacht
Reactions:
Show hidden low quality content
You must log in or register to reply here.
Share:
Facebook Twitter Reddit Tumblr WhatsApp Share Link
Top Bottom