Jump to latest Follow Reply
Menu
Install the app
You are using an out of date browser. It may not display this or other websites correctly.
You should upgrade or use an alternative browser.
Stellaris 46886 Bug Reports 27015 Suggestions 16435 Tech Support 2586 Multiplayer 358 User Mods 4418 Stellaris AAR (After Action Reports) Console edition 1123
Previous dev diary Next dev diary
Show only dev responses

Hello everyone and welcome to another Stellaris development diary. Today's dev diary is going to cover a feature coming in the (unannounced) expansion accompanying the 1.5 'Banks' update: Habitats. As before, I still can't say anything about the release date of the update/expansion other than that you're in for a bit of a wait.

Orbital Habitats (Paid Feature)
One of the things we have stated that we want to address is the lack of options for building 'tall' in Stellaris: Even if you're playing pacifist xenophiles that have no interest in conquering others, sooner or later your empire is going to have their borders closed in on all fronts, all the habitable planets in your space will be terraformed, and your only option for further expansion is to grow your space through conquest. When we say that we want to enable building tall, however, this doesn't mean we're going to make being a five-system empire just as good as being a fifty-system empire: There should always be an incentive to expand your borders, but for those who do not want or simply cannot do this, we want there to options other than just stagnating.

Orbital Habitats is one of our solutions to this problem: Instead of expanding to new systems and colonizing new planets, you create new, artificial 'planets' for your Pops to live on. Orbital Habitats are massive space stations that function like small (currently size 12, though this may not be the final number) planets that (like Gaia Planets and Ringworlds) have 100% habitability for all species. They can be built around any non-habitable planet (not asteroid or moon) in your space, and there is no limit to the amount you can build other than the number of such planets you have to build them around. Habitats function exactly like a planet: They can be colonized with whatever Pops you want to live there, they can be worked for resources by constructing buildings there, and they count as a planet for the purpose of empire research costs. In order to build a habitat, you need to have researched the maximum level of spaceport technology and picked the 'Voidborn' Ascension Perk (for more info on Ascension Perks, see dev diary 56)

Habitats mostly do not have tile resources with the one exception that if the planet they are orbiting has a resource that could otherwise be worked by a mining or research station, that resource will be present on one of the Habitat's tiles. Instead, Habitats have their own, unique set of buildings distinct from the normal planetary buildings. Overall, Habitats are efficient when it comes to research and energy general, but do poorly when it comes to food and mineral production. These buildings are 'single-stage': they have a fairly large upfront cost and high immediate research production, but cannot be upgraded. The reason for this is to allow for easier management of systems with several habitats in them.

Graphics-wise, Habitats use different models depending on which ship set you have selected, and each ship set (including Plantoids) has its own habitat model. They also have their own planet icon and will get a unique planetary graphic and tile set (that is still a work in progress and thus not shown below), emphasising the ways in which they differ from regular planets. 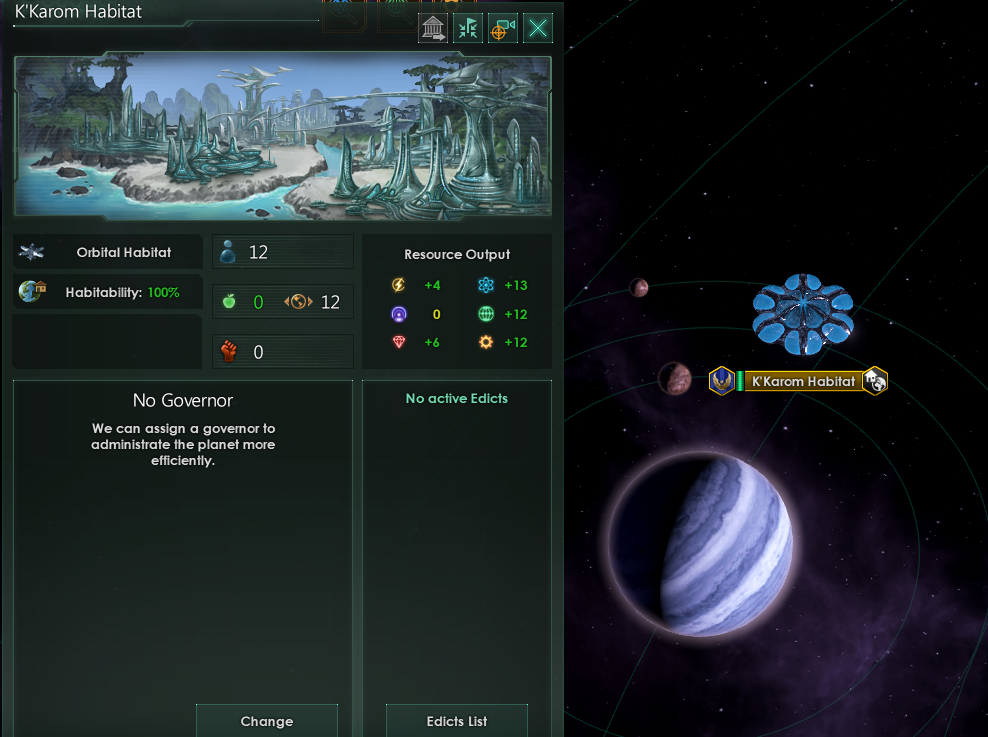 I always wanted to go live in space maaaaaaaannnnnnnnn!
Toggle signature
All my posts are opinions. They are not facts. I am nothing more than a player of a game that I have purchased. Do not mistake my posts for a statement of facts. They are my honest opinion. Your opinion may vary.
Reactions:

We're finally getting the HOI4 engine migrated to Stellaris to run planetary invasions. Nice.
Toggle signature
All my posts are opinions. They are not facts. I am nothing more than a player of a game that I have purchased. Do not mistake my posts for a statement of facts. They are my honest opinion. Your opinion may vary.
Reactions:

Here is hoping that a moon is actually a battlestation
Reactions:

Next dev diary is no moon.
Reactions:

Locked too far in tech tree to be useful. :/
Reactions:

And more and more enthousiast about Stellaris' future.
Reactions:

This is quite amazing! Can't wait!
Toggle signature
My latest AARs

I had doubt when first introduced to the concept of Space-Habitats but this Dev-Diary has put me at ease.
Before this I feared that this introduction would make systems to densely populated, but it seems like Paradox has handled the balancing excellently.
This is a good addition to the game which allows for interesting choices in gameplay.
Nice job, Stellaris-team!
Toggle signature
In war, the ultimate victims are the innocent.
-The Empathetic
Reactions:

I see a fist icon in the planetary details windows, would that perhaps be related to the new 'big, big' mechanic?
Reactions:

Looks pretty great, I'm going to enjoy spamming my core systems with these in the late mid game because I'm just that sort of galactic megalomaniac

Will there will be the same research penalty for these as with a small planet?
Toggle signature
"All that I have written seems like straw compared to what has now been revealed to me." - Thomas Aquinas
Reactions:

So what's to stop 'wide' empires from building their own habitats and outpacing the 'tall' empires anyway (other than the ascension perk, of course)?
Reactions:

Size 12 sounds huge for something that we can build. I understand that numbers are subject to change but that sounds very powerful for the amount of minerals/influence we see.

Also can they be destroyed in war or do they function like planets in that regard?
Reactions:

I'm honestly starting to get lost in the list of new announced (and unannounced) features. Was anyone counting by any chance?

Wiz said:
so all I'm going to say is that it's going to be big.
Click to expand...

you will destroy so many social lives in the near future...
Reactions:
G

Love how we get a good and interesting dev diary and the biggest hype is what the next one will be about .

Also, will there be different "levels" of habitat? So that when you first get them you can maybe only build 8 tile habitats but later on you get better tech and can build 12 tile ones?
Toggle signature
Check out my mods:
Expanded Stellaris Traditions which adds 48 new Tradition Trees to the game.
Expanded Stellaris Ascension Perks which adds 60 new Ascension Perks to the game.
Reactions:
Show hidden low quality content
You must log in or register to reply here.
Share:
Facebook Twitter Reddit Tumblr WhatsApp Share Link
Top Bottom