Jump to latest Follow Reply
Menu
Install the app
You are using an out of date browser. It may not display this or other websites correctly.
You should upgrade or use an alternative browser.
Stellaris 46891 Bug Reports 27022 Suggestions 16439 Tech Support 2587 Multiplayer 358 User Mods 4419 Stellaris AAR (After Action Reports) Console edition 1124
Previous dev diary Next dev diary
Show only dev responses

Hello everyone and welcome to another Stellaris development diary. Today we'll be talking about a new feature coming in the 1.5 'Banks' update called Traditions and Unity. As before, I can't talk about when Banks will be coming out, only that it's a while away and we have quite a few dev diaries to go through before we get there

Traditions and Unity
One thing we have mentioned as a big priority for Stellaris is adding more empire customization and more ability to roleplay diverse empires. We have also talked about our desire to allow for the existance of 'tall' empires. Traditions and Unity is a feature that aims to tackle both these topics by adding 7 new Tradition trees and a resource called Unity that is used to unlock them. Unity is an accumulative resource that increases each month, and is primarily gained through the construction of government buildings such as monuments, mausoleums and temples. Unity is spent on adopting Tradition trees and purchasing individual Traditions. Each Tradition tree has a starter bonus, five unlockable bonuses and a finisher bonus that is gained once the entire tree is filled out. 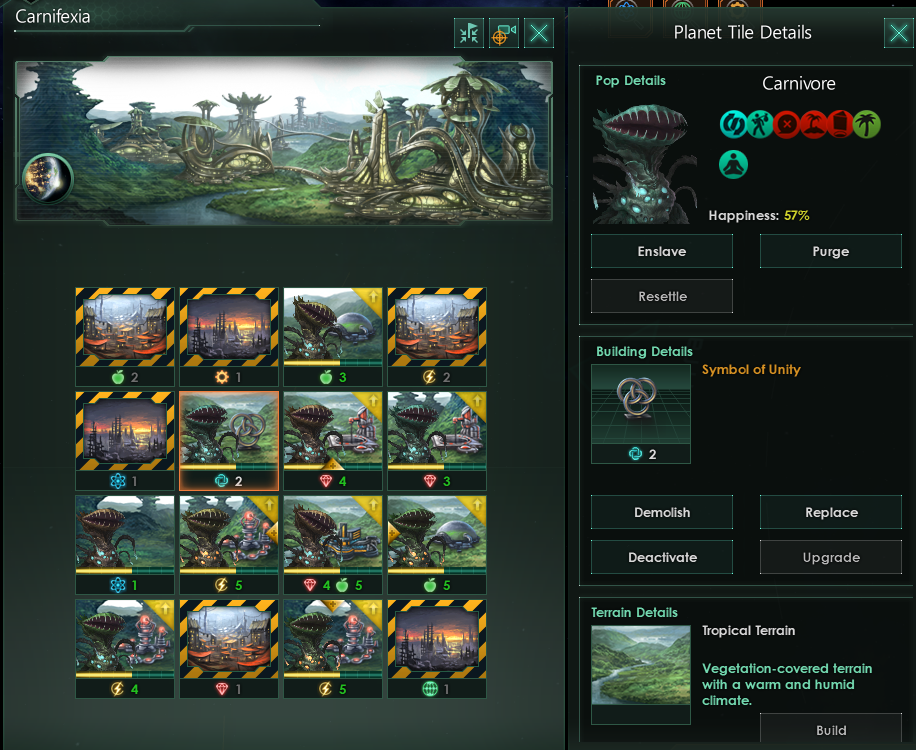 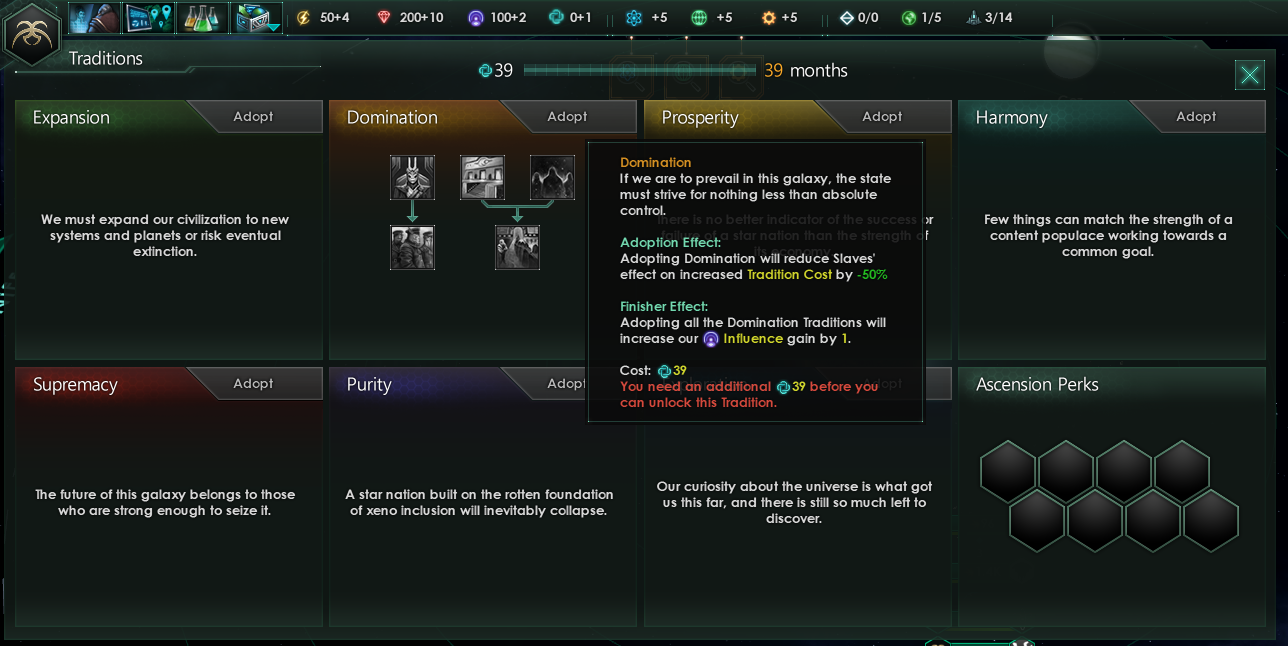 The cost of unlocking a Tradition depends on the size of your empire, as well as how internally stable it is. Unhappy factions, minority species and slaves all increase the cost of adoption Traditions further, though these effects can be offset or even canceled out entirely by adopting the right Traditions for the empire you intend to build. Overall, small harmonious empires will unlock Traditions more quickly than large, expansionistic ones. Which Traditions you unlock also has a significant impact on the ethics of your population, and so can be a useful tool to either strengthen your existing empire ethics or further a planned empire-wide shift towards a different set of ethics altogether.

You may have noticed a certain part of the Traditions screen that I have not yet mentioned in this dev diary. That's because it's actually the subject of the next dev diary! However, since the Christmas holidays are coming up, most of the Stellaris team will be away, so dev diaries will be on hiatus until January 12th. Tune back in then to find out all about the Ascension Perks and how you can use them to build the empire of your dreams.
Last edited: Dec 15, 2016
Reactions:

A bit sarcastic, but I liked it in Civ 5, and I think it's a good idea.
Toggle signature
Sit now there, and look out upon the lands where evil and despair shall come to those whom thou allied. Thou hast dared to mock me, and to question the power of France, master of the fates of Europe. Therefore with my explorers thou shalt see, and with my spies thou shalt hear; and never shall thou be released from vassalage until all is fulfilled unto its bitter end.

+1 stability!
Toggle signature
"Official Update: I'm sure everyone will be happy to know that plague now officially kills people!" -Demiansky, on M&T 2.0
"A volunteer art thread. Crowd sourcing at its best. Then I can take what I want and crush the dreams of everyone else." -Demian

"Honestly with you guy's track record I'm 90% sure half the new children events you're introducing will have my child banging my wife/concubine/his sister or somehow imprisoning me without recompense." -Nameless_Ensign

I like this!
Toggle signature
All posts by me, unless otherwise stated, is my view on the issue discussed.

I assume traditions will be limited by ethos? Can't really imagine xenophiles being too keen on the 'purity' traditions...
Reactions:

Hapchazzard said:
I assume traditions will be limited by ethos? Can't really imagine xenophiles being too keen on the 'purity' traditions...
Click to expand...

I haven't played much Stellaris for a couple of months. This update looks like the sort of thing that'd get me to play it again
Reactions:
A

So, apart from reworked ethics and factions we also get a completely new mechanics? Love it.
Reactions:

Is there a limit to the amount of tradition trees an empire can adopt?
Reactions:

Will you be able to set traditions for custom empires while you create them? I'd love such a feature (+ setting priorized and forbidden techs) so that the AI can roleplay the intended society I had in mind for my custom empire better when I let them spawn in my own galaxies.

PS: I'd also love the ability to write custom insults, greetings and the initial backstory popup for my custom empires.
Reactions:
N

Sounds awesome.
Are you planning to rework influence costs for colonies in the coming update/s?
Reactions:

This is really cool!

D3m0 said:
Is there a limit to the amount of tradition trees an empire can adopt?
Click to expand...

No, but costs increase with every tradition adopted.
Toggle signature
For every complex problem there is an answer that is clear, simple, and wrong.

Straight up rip-off of Civ5, then? Good, I love that game.
Toggle signature
"Camaraderie... Adventure... And steel on steel. The stuff of legends! Right, Boo?"
Reactions:

Nothing for like a month? I'll miss you guys
Toggle signature
Fanatic achievement hunter + Mediocre player = Many wasted hours
Reactions:

Inner Circle said:
how moddable is this feature? could we add more than 7 traditions?
Click to expand...

Completely moddable.
Toggle signature
For every complex problem there is an answer that is clear, simple, and wrong.

LeeDub said:
Straight up rip-off of Civ5, then? Good, I love that game.
Click to expand...