Jump to latest Follow Reply
Menu
Install the app
You are using an out of date browser. It may not display this or other websites correctly.
You should upgrade or use an alternative browser.
Stellaris 44863 Bug Reports 24589 Suggestions 14668 Tech Support 2404 Multiplayer 348 User Mods 4288 Stellaris AAR (After Action Reports) Console edition 1045
Previous dev diary Next dev diary
Show only dev responses
Hi folks!

The topic of the week in this series of dev diaries for Stellaris is what sets empires and species apart from each other. Most obviously, of course, they look different! We have created a great many (ca 100) unique, animated portraits for the weird and wonderful races you will encounter as you explore the galaxy. These portraits are mostly gameplay agnostic, although we have sorted them into six broad classes (Mammalian, Arthropoid, Avian, Reptilian, Molluscoid or Fungoid) which affect the names of their ships and colonies, for example. To give additional visual variety, their clothes may sometimes vary, and when you open diplomatic communications with them the room they are standing in will appear different depending on their guiding Ethos. 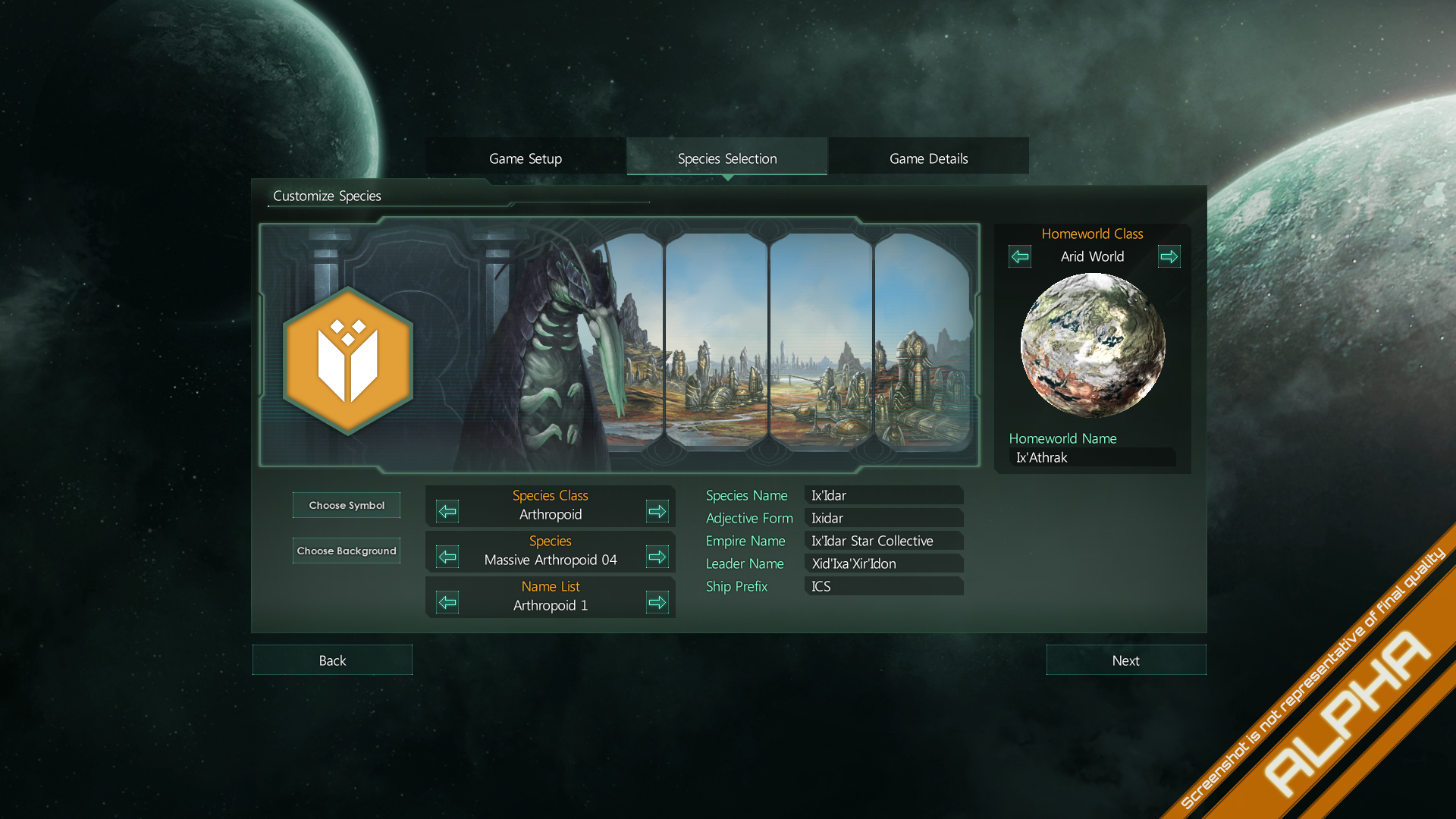 Speaking of Ethos, this is no doubt the most defining feature of a space empire; it affects the behavior of AI empires, likely technologies, available policies and edicts, valid government types, the opinions of other empires, and - perhaps most importantly - it provides the fuel for internal strife in large and diverse empires. When you create an empire at the start of a new game, you get to invest three points into the various ethics (you can invest two of the points into the same ethic, making you a fanatic.)

Your Ethos will limit your valid selection of government types, but there are always at least three to choose from; an oligarchy of some kind, a democracy or a monarchy. They all have their advantages and disadvantages. For example, in monarchies there are no elections, and you do not get to choose your successor when your ruler dies (except in Military Dictatorships), and if you die without an heir, all Factions in the empire will gain strength (oh, and there may be Pretender factions in monarchies...) On the other hand, each ruler may build a special "prestige object" in his or her lifetime, named after themselves. For example, military dictators can build a bigger, badder ship, and Divine Mandate monarchs can build a grand Mausoleum on a planet tile. Of course, both ethics and government types usually also have direct effects on the empire. 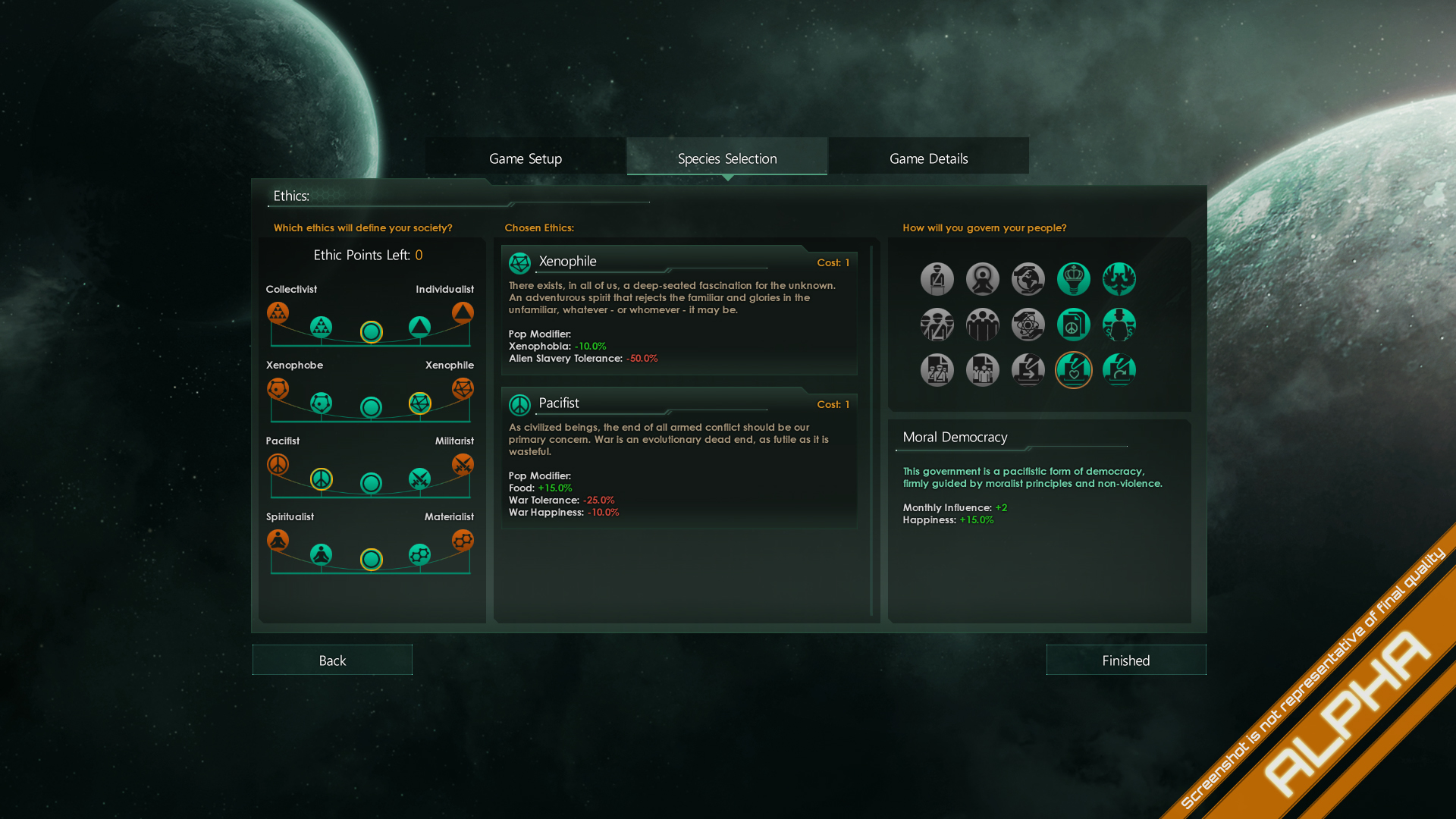 Keep in mind, though, that there is a clear difference between the empire you are playing and its founding race. Empires and individual population units ("Pops") have an Ethos, but a species as a whole does not. Instead, what defines a species is simply its initial name, home planet class, and portrait (and possibly certain backstory facts.) Each race also starts out with a number of genetic Traits. As with the empire Ethos, you get to spend points to invest in Traits when you create your founding species at the start of a new game.

It is natural for individual Pops to diverge in their Ethics, especially if they do not live in the core region of your empire. This has far reaching consequences for the internal dynamics of empires; how Pops react to your actions, and the creation and management of Factions, etc (more on that in a much later dev diary!) Traits are not as dynamic as ethics, but even they can change (or be changed - this is also something we will speak of more at a later date...)

The traits and ethics of individual Pops of course also affect their happiness in various environments and situations. Naturally, they cannot even live on planets that are totally anathema to them…

It is... beautiful
Toggle signature
I was imagining Petrarch sobbing whilst a mad Irishman hacked repeatedly at the corpse of Nigel Farage, mutilating it still further. Meanwhile, an Ulsterman dressed entirely in orange yelled that the Irishman was actually English, and less Irish than him. - DoomBunny
To be honest I kinda like being a woman. - Lord Finnish
I have the social capabilities of a carrot - LYNCHY
War is dark and full of horror. But there's an unshakable tinge of honor and glory from time to time. - DarthShizNit
Reactions:

'Each race also starts out with a number of genetic Traits. As with the empire Ethos, you get to spend points to invest in Traits when you create your founding species at the start of a new game.'

Jesus, I was horrified reading this DD and not getting any info on the actual gameplay differences between races (other than Ethos). Thanks for writing that

One question: will we get some info on Traits rooster soon?
Reactions:

I love what I am seeing. And what is being implied! POP's? You mean we can get down to some incredibly delicate population management when we aren't blowing up space bugs with space lasers? I just hope you make the immigration mechanics more easily manipulated!
Toggle signature
"Too often Fate,
by all abhorred,
to savage poison,
adds the sword."
- Boethius, The Concillations of Philosophy
Reactions:

Will it be possible to earn more Ethic points down to road to go more fanatic, or swing in the other direction?
Toggle signature
Doing all Achievements (with AAR's!):

"Pops"... he said "pops".... *tears of joy and relief*
Toggle signature
Replying with statements like "make a mod" to someone's recommendation for improving the actual game is plain stupid and useless.
Reactions:

Could we get more info on the government type and their requirement? Please? You're making me so hype I hate.
Reactions:

[screams like a little girl after reading the DD] this is sooooo coool!

ok so 15 different goverment types. i like it! (who is going to try and name them all )

question to the devs: if the majority of your pops have different ethos as the empire can the empire change its Ethos and thus eventually its government type?
Toggle signature
Soon to be a Major religion near YOU!
Reactions:
P

The ethical choices you guys have made in the second screenshot remind me of a certain interstellar civilisation....

Awesome, there seem to be what fifteen government types? And the ethos system looks awesome. And leaders are next, oh man oh man Can't wait to play it!
Toggle signature
“There is a cult of ignorance in the United States, and there has always been. The strain of anti-intellectualism has been a constant thread winding its way through our political and cultural life, nurtured by the false notion that democracy means that 'my ignorance is just as good as your knowledge.”-Isaac Asimov
Reactions:

Yeah! Doomdark is back! Nice to see you are better again!
And incredible DD!
Hope there are possibilities to change Ethos of Empires during the game
Toggle signature
One Game to rule them all, One Game to find them,
One Game to bring them all and in the darkness bind them
In the Land of Paradox where the playtapi lie.
Reactions:

Wow, I love everything I see in this DD, the design of the aliens, the ethics/gov options, the glorious pops in space.

Okay, I've got to ask, what's your favorite government and or species type so far?
Last edited: Oct 19, 2015
Reactions:
G

I feel that the division of species types into classes Mammalian, Arthropoid, Avian, Reptilian, Molluscoid or Fungoid is a bit restrictive. I get the impression that it really won't have that big a diference anyway, don't you think it would be better to just scratch the classes? Then you could continue to add species without trying to fit them into categories.

You will have to get names of their ships and colonies from elsewere. But honestly some conection depending on a visual similarity to categories of life on earth as a naming basis from ship wouldn't be that much superior to any other?
Toggle signature
Check out my mods:
Expanded Stellaris Traditions which adds 48 new Tradition Trees to the game.
Expanded Stellaris Ascension Perks which adds 60 new Ascension Perks to the game.
Reactions: