Jump to latest Follow Reply
Menu
Install the app
You are using an out of date browser. It may not display this or other websites correctly.
You should upgrade or use an alternative browser.
Stellaris 46660 Bug Reports 26808 Suggestions 16209 Tech Support 2571 Multiplayer 357 User Mods 4395 Stellaris AAR (After Action Reports) Console edition 1108


Improved Bloom Shader (Free Feature)
One of the features we really wanted to get in for release but never could was the improved bloom shader. Bloom is now days a dirty word, and has a bad reputation from previous generations overuse. But when used correctly it really makes thing look amazing. A game like Stellaris where so many things are glowing, ship windows and engines, stars, laser weapons etc. We had most of the code done before release, but once we switch over, everything in the game which was glowing needed to be tweaked, and in some cases needed code.
During Heinlein we had some time for this and now its all fixed so the star burn bright and the lasers glow. 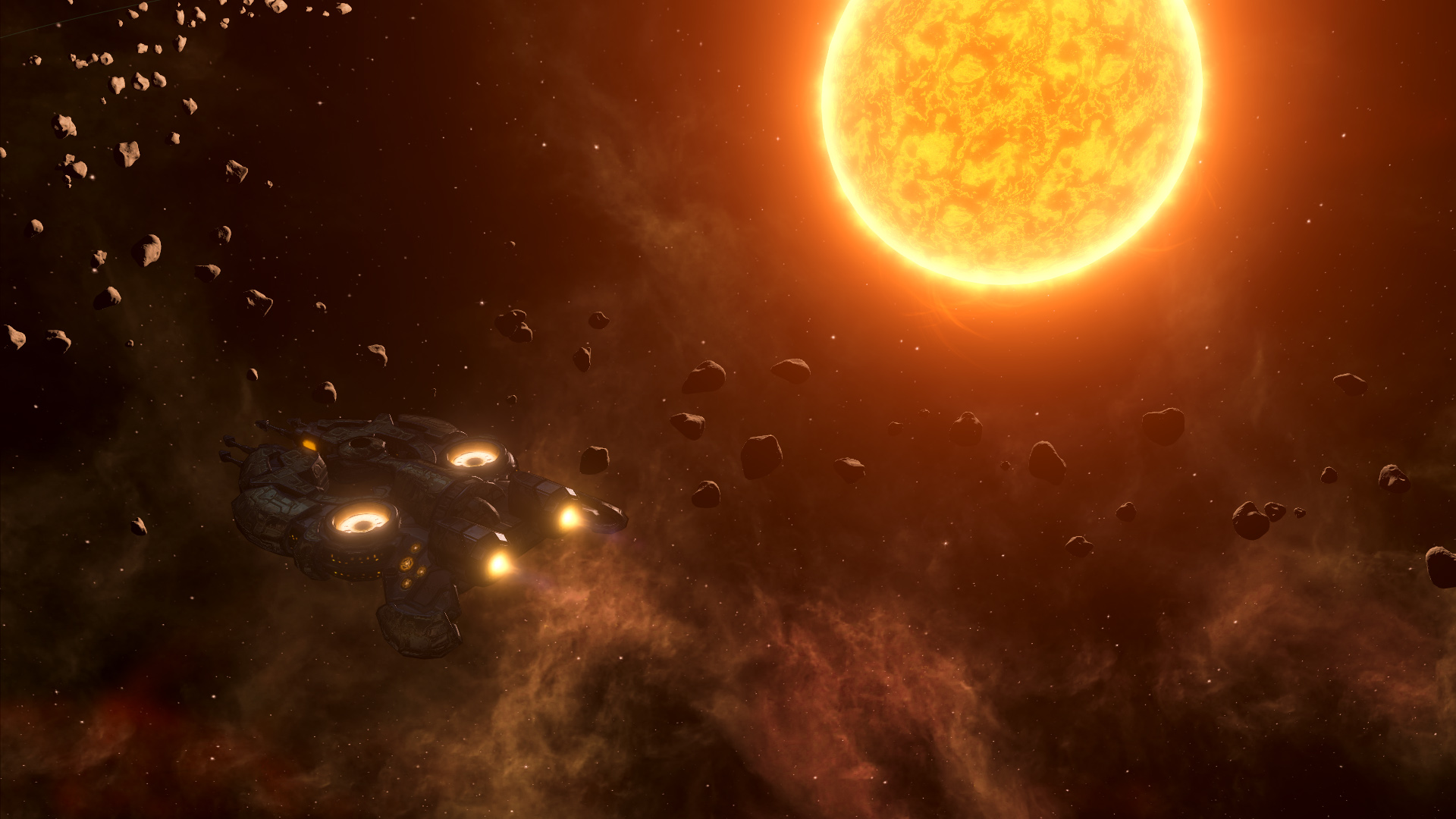 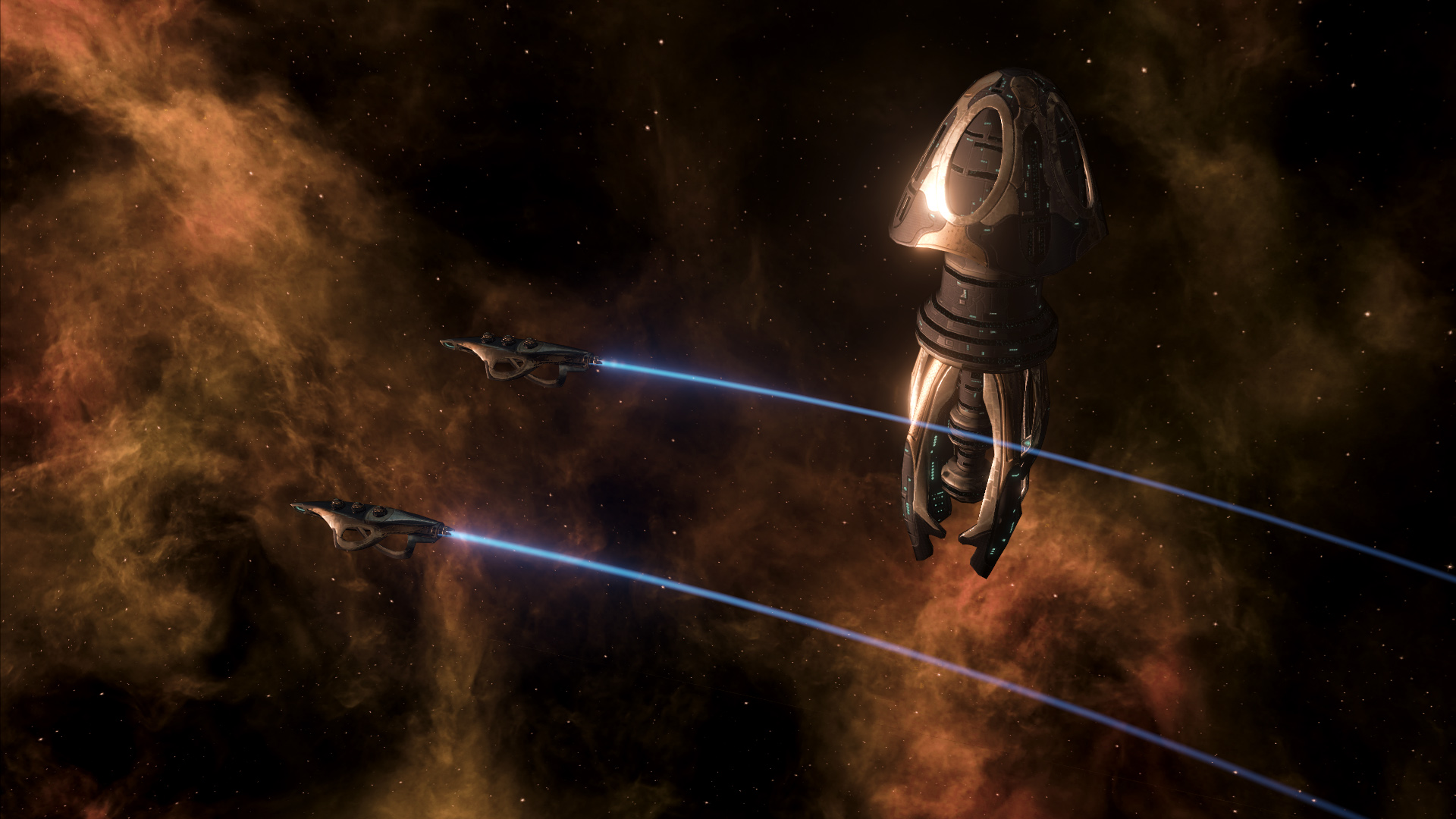 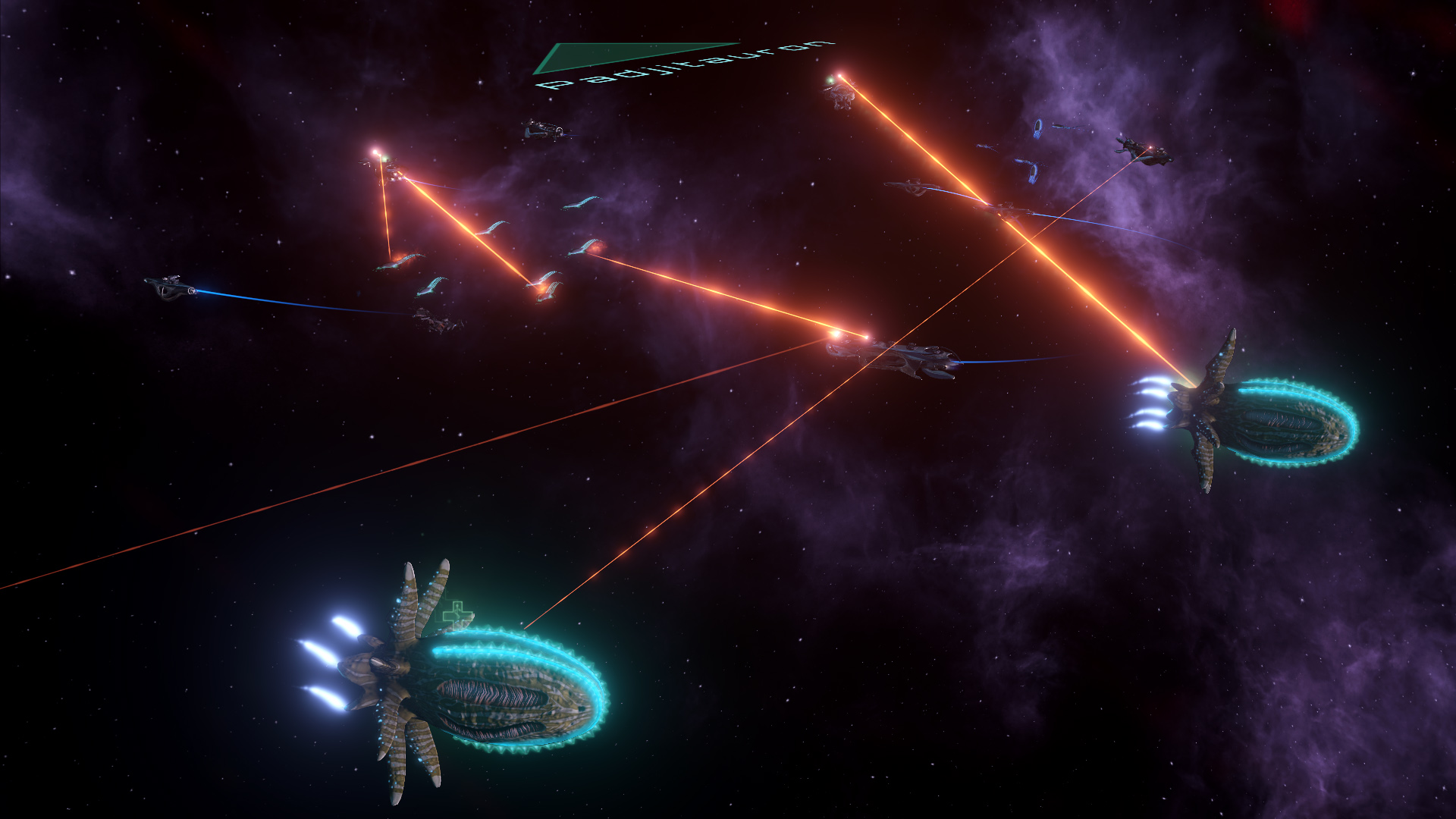 We also spent a little bit of time improving the planet city textures. 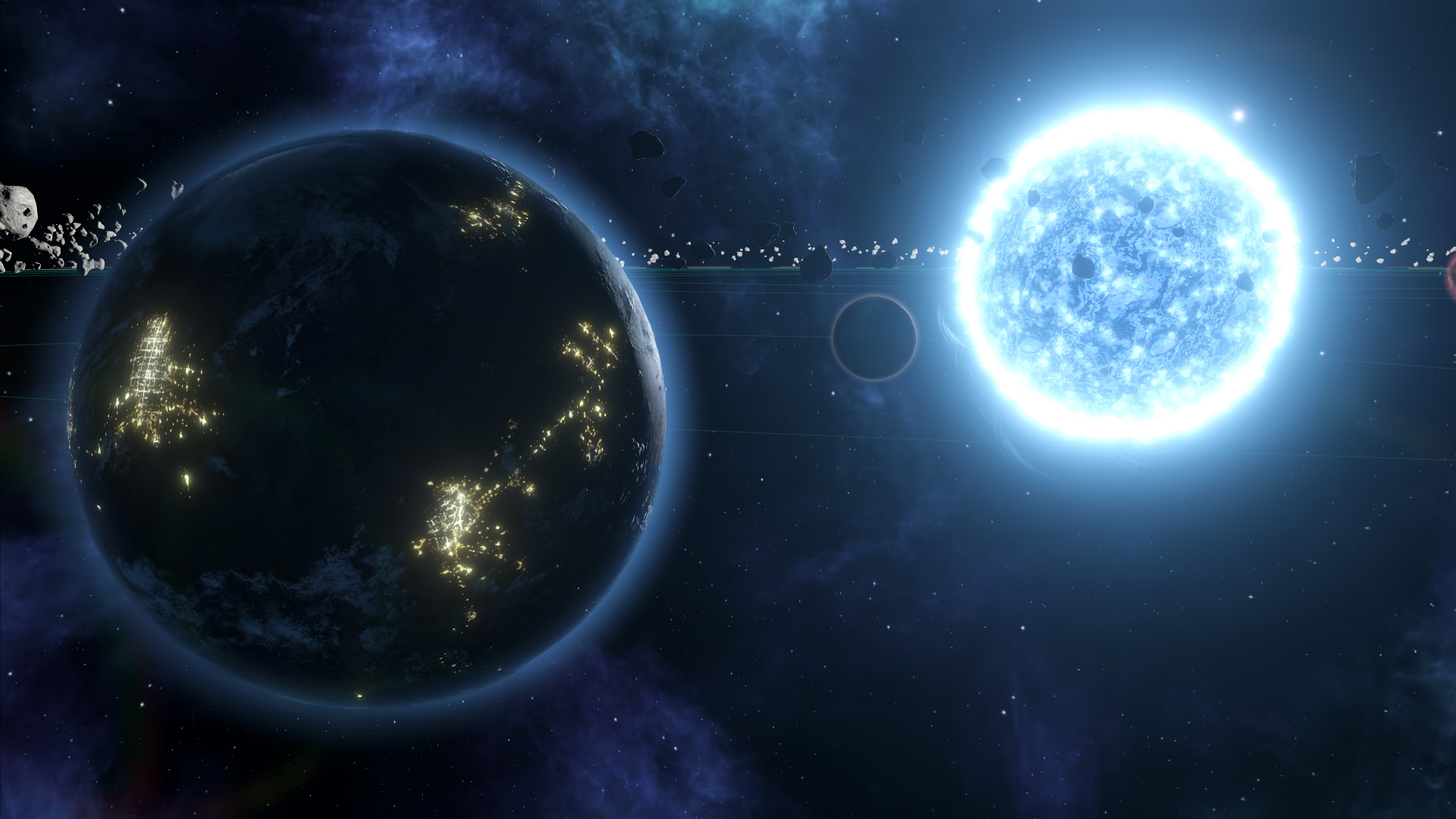 New Portraits
Both before and after the release of Stellaris we've received a lot of different requests for new species portraits. Among the more frequent requests are to make more 'alien' aliens, and this is something we tried to address before release, adding a large number of non-human shaped aliens. Another common request, that I felt we did *not* address, was for more 'cute', 'pretty' and 'humanlike' aliens. Sure, we have your basic humans and there's the ever-lovable space foxes, but we've noticed that quite a few people tend to play *only* as humans or *only* as space foxes, and we wanted to give these people some more options to play with. For this reason we decided to do a new round of portraits, with the work split between 'cuties' and 'humanlike' aliens.

Humanoid Portraits Pack (Free Feature)
Humanlike (or 'rubber forehead' as they're sometimes derisively called) aliens is something we intially avoided putting into Stellaris, focusing on more alien species to give a sense of the galaxy as a diverse place full of different lifeforms. However, I felt that in doing so we overlooked the fact that there is quite a few people who actually want to play as, and encounter, more humanlike aliens, as they are something that we as humans can more easily recognize and relate to than say, a sentient crab. For this reason we decided to create a new species class called 'humanoids' that is essentially mammalians that look more like humans than other mammalians, and made 4 new portraits for this category that will be given to everyone in the free Heinlein update. Humanoids do not have their own city graphics or ships as they are essentially mammalians and mostly only have their own group for interface sorting purposes. When making portraits going into the future, we will continue to focus primarily on 'alien' aliens, and humanlike ones will always be very much in the minority, but they will still be there for those that want them.

That's all for this week! Next week, Heinlein and the Leviathans Story Pack will be coming out, so we are now officially all tapped out on content to show you for them. However, be sure to watch the release stream and today's Extraterrestial Thursday stream for further previews and sneak peeks. We will also be posting the 16-page patch notes sometime during next week, so keep your eyes peeled for that as well.

I really enjoy the snail portrait, as well as the humanoid ones with the strange cable-like wires coming from their head. I'll definitely make an Empire with those ones once Heinlein comes out.

Also, the first set of humanoids reminded me alot of klingons. I personally like that.

Edit: Also, does the snail portrait have something in its mouth? Looks a bit like wheat.
Last edited: Oct 13, 2016
Reactions:

Will the new graphics features affect performance? I was pretty relieved to find out my ageing graphics card could handle Stellaris when it first came out.
Reactions:

That last humanoid is my new main species! :O
And look at that cute snail!
OH MY GOODNESS! 7 more days... <3

No public beta for the patch this time, they seem to be really running tight on schedule with this one

We generally don't do betas for updates that have accompanying content DLC.
Toggle signature
For every complex problem there is an answer that is clear, simple, and wrong.

Dark Lord of the Derp

I think they stated it was due to there being a DLC along side it, making a public beta not desirable.

edit: Ninja wiz *shakes fist angerly*
Toggle signature
Derping is a pathway to many abilities, some to be considered unnatrual.
-Derp Sidious

I find your lack of derping, disturbing.
-Derp Vader

Out of all the senses the common one is often the one most easily deceived.
-misterderp

Ah, i see, testing not really working without dlc, and can't give dlc as beta
Reactions:

I oppress natives for fun in EUIV and force every female prisoner into degrading concubinage in CK2, but even my black heart cannot resist this level of CUUUUUTTTEEEE
Toggle signature
"Oscot is a remorseless [fun]poster, but I kind of have to respect his style." -- Konaa

Fight the "Muh Optimal Build" scourge with the Stellaris Empire Randomiser. Now with galaxy and gub'mint choosers! What are you, CHICKEN?
Reactions:

Love the new portraits! The humanoids especially are a great base for Star Trek mods!
Reactions:

The Snailien looks so adorable, it will be so much fun to let my Fanatical Purifiers drop huge amounts of salt on their heads! :3
Reactions:

Wiz said:
When making portraits going into the future, we will continue to focus primarily on 'alien' aliens, and humanlike ones will always be very much in the minority, but they will still be there for those that want them.
Click to expand...

Thank you. One of my long-term wishes for the game regarding portraits is to not let everyone be a humanoid/humanlike. Nice to know that you will be mixing things up

Are forum portraits getting this update as well?
Reactions:
H

Will the humanoids have their own names and name lists, or will they use the mammal ones, like the city and ship graphics?
Reactions:
J

Am I the only one that finds these aliens to look immeasurably creepy?
Toggle signature
Mothballing Megastructures - A Stellaris Suggestion thread.
Reduce Construction Ship Micro - A (slightly older) Stellaris suggestion thread.

I must say I don't like these new humanoid portraits, they look too human for my taste. Is it possible to disable portraits with a mod without changing checksum?
Reactions:

Will humanoids be able to switch to a different portrait upon a spontaneous environmental adaptation event?

Haseri said:
Will the humanoids have their own names and name lists, or will they use the mammal ones, like the city and ship graphics?
Click to expand...

They have their own name lists.
Toggle signature
For every complex problem there is an answer that is clear, simple, and wrong.