Jump to latest Follow Reply
Menu
Install the app
You are using an out of date browser. It may not display this or other websites correctly.
You should upgrade or use an alternative browser.
Stellaris 44611 Bug Reports 24356 Suggestions 14403 Tech Support 2355 Multiplayer 345 User Mods 4256 Stellaris AAR (After Action Reports) Console edition 1035
Previous dev diary Next dev diary
Show only dev responses

Today we will go into the sixth part in a multi-part dev diary about the 'Heinlein' 1.3 update and accompanying (unannounced) content DLC. The topic of today's dev diary is the changes to ship roles and ship balance.

Ship Roles
The new design intends to give each ship a more unique combat role. Some ships will be defensive, while others will be more offensive.

Corvettes
Small and aggressive ships with high evasion that can be equipped with torpedoess. They will be very effective against large ships like battleships due to their high evasion and access to torpedoes. They have very low armor, but a very high chance to evade.

Destroyers
Defensive ships that are designed to counter corvettes, which is why they receive an innate +10 bonus to Tracking. They can be equipped with point-defense weapons, to shoot down the torpedoes fired by corvettes. They have moderate armor, and a moderate chance to evade.

Battleships
The new role for battleships will be durable capital ships that fire at its enemies from a long distance. They are the only ship size that can be equipped with extra large weapons. They have very high armor, but minimal evasion. 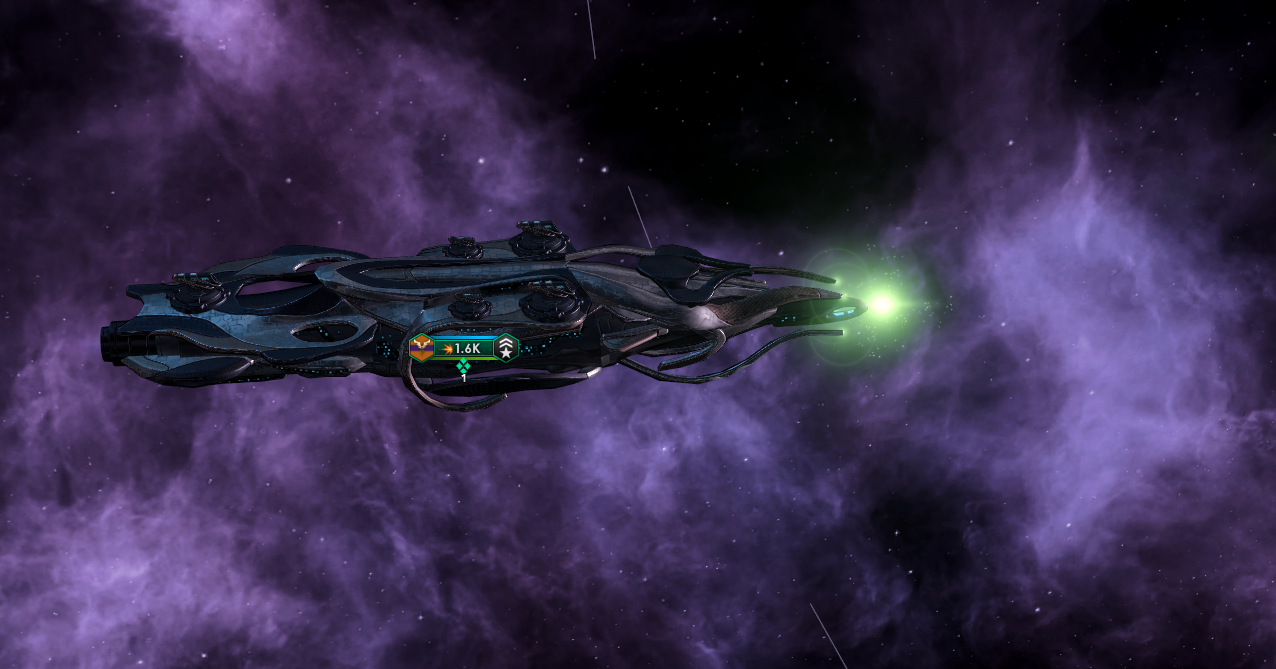 This means that large weapons - with a poor Tracking value - will still be very effective against large ships like cruisers or battleships, but almost useless against small ships like corvettes due to their high evasion.

Another note is that missile weapons no longer ignore evasion, and can be evaded like normal. Most missiles, however, will have a very high Tracking value. 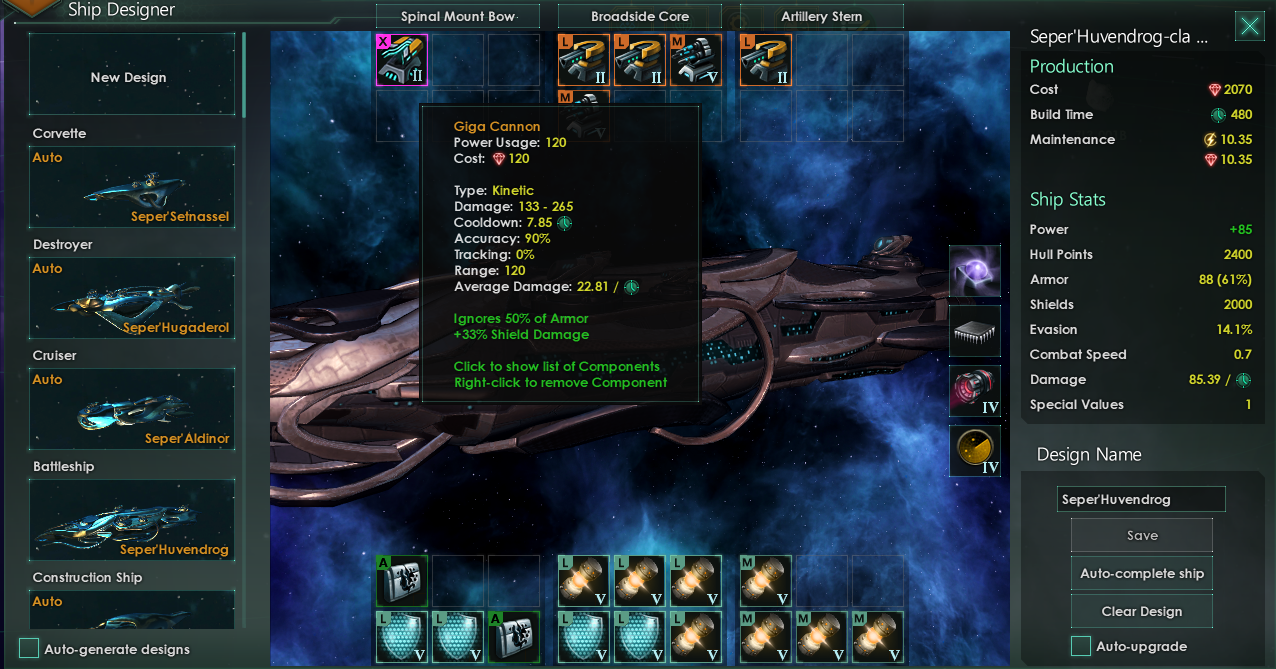 New Slots
Something new in the Heinlein patch will be the introduction of a couple of new slot types.

The extra large slot will contain powerful spinal-mounted weapons that are designed to target and take out enemy capital ships. Only Battleships will have a ship section with this weapon slot.

The torpedo slot, as evident by its name, will hold torpedoes. Torpedoes are slow firing weapons that deal massive damage, perfect for taking down larger ships. Unlike other missiles, however, torpedoes do not have good Tracking, which means they are very ineffective against ships with high evasion, such as corvettes or destroyers.

The auxiliary slot will hold components that have ship-wide effects. Crystal-Forged Armor, Shield Capacitors and Regenerative Hull Tissue are examples of components that will now be equipped in this slot.

Point-defense weapons now have its own slot size. The idea is that you should need to specialize some ships into countering enemy torpedoes 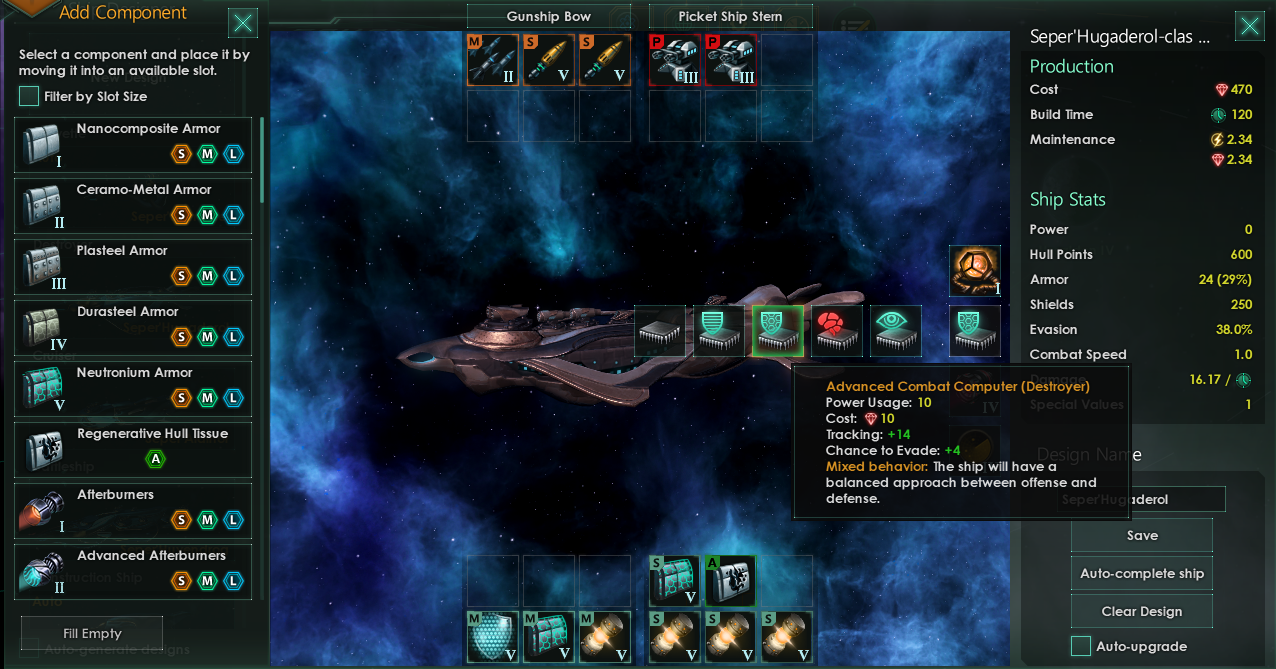 Major weapon rebalancing
Most weapons have been rebalanced to better suit the new design.

That's all for this week! Join us again next monday when we’ll be back with another dev diary!
Last edited: Sep 12, 2016
Reactions:

Hah?Am I got wrong or most info has been revealed in dev 41?
Reactions:

Are there any plans to allow players to interact with their engaged fleets during space combat?
Toggle signature
Ukrainian Lands at the 16-18th Centuries Maps
[EU4] Multiplayer Rebalance Mod (MPR by ZP) [SteamWorkshop] - a mod designed for MP fans by an MP fan
Reactions:

Looks like there is some re-balance in weaponry too.

Have to admit I don't actually like this. Seems unnecessarily restrictive and not particularly logical. Still looking forward to the DLC and not complaining about the game as a whole by any means, I just think this particular set of changes is moving in the wrong direction.
Reactions:

Wiz said:
That's all for today! Next week we'll be talking about Enclaves, a feature in the DLC that will accompany the Heinlein update.
Click to expand...

Seriously though, I do like the idea of making ships have more defined roles in combat. It's nice to see the plans for this fleshed out a little more from the last time it was mentioned.
Toggle signature
"It is well known that nothing is such thirsty work as the acquisition of knowledge."
Reactions:

Will the new torpedoes' have the same range as their current version? Or will they be short range due to represent the need of smaller ships needing to get close up to take out battleships?

Also am I dumb or am I the only one who hasn't seen afterburners in game so far?

Haven't this already be said in DD 41? (https://forum.paradoxplaza.com/foru...is-dev-diary-41-heinlein-patch-part-2.962953/)
What about the enclaves DD announced?
Toggle signature
"It came to me when I tried to classify your species and I realized that you're not actually mammals. Every mammal on this planet instinctively develops a natural equilibrium with the surrounding environment but you humans do not. You move to an area and you multiply and multiply until every natural resource is consumed and the only way you can survive is to spread to another area. There is another organism on this planet that follows the same pattern. Do you know what it is? A virus. Human beings are a disease, a cancer of this planet. You're a plague and we are the cure."
Agent Smith
Reactions:

Mackus said:
Good update.
I am not sure about destroyers having innate bonus to tracking. Why not just boost destroyer-specific combat computers into giving tracking bonus?
Click to expand...

Will there be ways to increase ship evasion, as a counter to weapons systems with high tracking? Perhaps an ECM auxiliary system? Could be useful if you go up against someone relying heavily on missiles...
Reactions:

They're new with Heinlein.
R

They were mentioned in DD #41:


Wiz said:
A new utility type, afterburners, provides additional combat speed, allowing you to design ships that can closely quickly with your opponents.
Click to expand...

Toggle signature
"It is well known that nothing is such thirsty work as the acquisition of knowledge."
Reactions:
L

So how does starting weapon technology factor into this?
Do Laser get energy torpedoes, Kinetics get Fast torpedoes and Missles get torpedo torpedoes?
Reactions:
G

So does accuracy still work with evasion like it currently does?

i.e. % chance to hit = (accuracy - evasion) / accuracy ? With evasion now being lowered with tracking? Or is accuracy simply %hit by itself now, so its really a damage reduction on weapons aside from the fact you can upgrade your accuracy?

No Enclaves = ( Person responsible for that dd absent?
Reactions:

Prince with a Thousand enemies

This patch should have been named "EVE Online" instead of "Heinlein".
Toggle signature
Stellaris: A guide to technology beelining (tech trees updated for version 2.2) | Performance analysis (#1, #2)
Reactions:

So how will the extra large weapon be useful against small ships? Will handful of corvettes always be able to take down battleship?
This ship roles change seems to me a little bit like the problem of balance is swept under the carpet by rock-paper-scissor (-lizard-Spock) system. Maybe it will be for the better, dunno, will have to try how will it play out. In most other games I ended with fleets of battleships and discarder smaller vessels so if there will be mechanism to use all of ship types then good. Still this solution looks a little bit artificial to me though.
Reactions:

grekulf said:
Point-defense weapons now have its own slot size. The idea is that you should need to specialize some ships into countering enemy torpedoes!
Click to expand...

I've already been doing this! Whenever I find myself at war with a missile using empire I make a small corvette group with aggressive combat computers and only PDCs, and give the rest defensive computers and longer range weapons. It works so well against AI.
Toggle signature
GENERATION 38: The first time you see this, copy it into your sig on any forum and add 1 to the generation. Social experiment.
Reactions:
Show hidden low quality content
You must log in or register to reply here.
Share:
Facebook Twitter Reddit Tumblr WhatsApp Share Link
Top Bottom