Jump to latest Follow Reply
Menu
Install the app
You are using an out of date browser. It may not display this or other websites correctly.
You should upgrade or use an alternative browser.
Stellaris 44596 Bug Reports 24338 Suggestions 14394 Tech Support 2354 Multiplayer 344 User Mods 4256 Stellaris AAR (After Action Reports) Console edition 1035
Previous dev diary Next dev diary
Show only dev responses

Hello everyone and welcome to another Stellaris development diary. Today we will once again be talking about the Asimov 1.2 patch, that is planned to be released before the end of June. Last week's dev diary covered most of the diplomatic changes, here we'll be covering a variety of other changes and additions, though it will by no means be an exhaustive list. Full patch notes will be posted at some point before the patch is made available to the public, and include a large number of balance changes, bug fixes and UI improvements.

Better Looking Battles
One thing we were not quite happy with in the release of Stellaris is the way battles look - when small numbers of ships are engaged, it generally looks fine, but large fleet battles turn into disorganized heaps of ships, or 'beeswarms' as they have been described by players. A number of mods (such as the Beautiful Battles mod) emerged quickly to tweak this part of the game, and we've been looking at them for inspiration on how to improve the battle visuals. We plan to look more in detail at ship roles and fleet engagements in the future, but for Asimov we've made the following changes:
- The range of all weapons have been increased, so that fleets will engage at longer ranges and spend more time advancing at each other before close-up engagements happen.
- Combat computers were changed from Aggressive and Defensive into Swarm and Bombardment computers, to better describe their roles. Ships with Swarm computers will move in closely and engage, similar to old combat behaviour, and have bonuses to damage, speed and evasion. Ships with Bombardment computers will advance into weapons range and then slowly drift towards the enemy until they have range with all of their weapons, and have bonuses to accuracy, fire speed and weapons range.
- The default combat behaviour of ships was changed from that of orbiting 'swarm' mode into one where they make passes at the enemy and attempt to engage with 'broadsides', which should help make large battles look like less of an angry beeswarm unless all ships involved are using aggressive computers.

Map Modes
A highly requested feature ever since release has been the addition of more map modes, so that players can more easily keep track of things such as who their allies are, which empires they are at war with, or who has a positive attitude towards them. For Asimov, we've added a map modes feature with fully scriptable map modes that let modders at their own map modes, with three new map modes coming as part of the patch:
- Diplomatic Map Mode: Shows diplomatic relations with other Empires, such as whether you are at war, are allies with them, or are blocked from entering their borders.
- Opinion Map Mode: Shows their opinion of you.
- Attitude Map Mode: Shows the AI's attitude towards you. 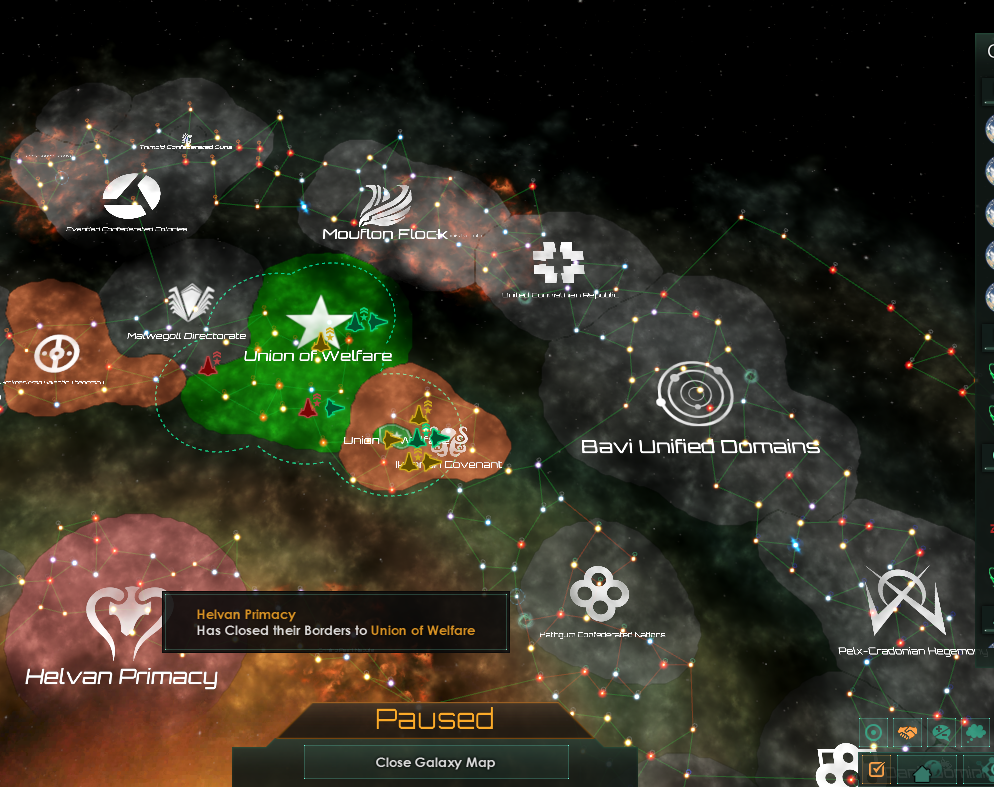 Nomad Fleets
Another feature that we decided to expand on for Asimov is Space Nomads. A rather rare encounter in the base game, all they do is share contacts with other empires, and we felt they're an interesting concept that can be used in far better ways. Nomads are now a roaming fleet that can enter the galaxy sometime during the course of the game, and will then plot a course through the galaxy, visiting a variety of locations before they leave it again for destinations unknown. If they pass through your space on the way, they may interact with you in a variety of ways, such as offering to sell you some ships, or requesting permission to settle some of their people within your borders. 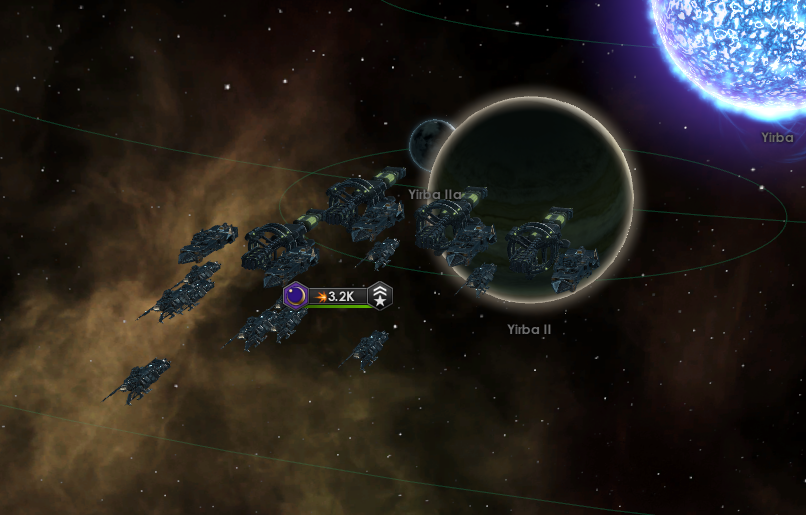 Slave Factions
As you likely know if you've been reading these forums, slaves were not intended to be as docile as they were in the release of the game, but rather we had to cut slave revolts for lack of time because slaves were completely unmanageable and threatened to make the feature entirely useless. For Asimov, we've reworked the Slaves faction into a pair of factions called the Docile and Malcontent Slave Factions. As the names imply, Docile Slaves are slaves that are relatively content with their lot in life, and will at most demand that regulations are placed on the worst excesses suffered by slaves, while Malcontent Slaves are far more riotous and will demand their freedom. There is also an Aboltionist factions that can be joined by free pops who are sympathetic to the plights of the slaves.

New Wargoals
Something that has been frequently requested is more variety in the wargoals you can use on others, so that war can happen for other reasons than simply to transfer territory. This is an area we'll be looking at fleshing out long-term, but for Asimov we've added at least a few new wargoals to spice things up:
- Make Tributary: You can now take tributaries in war. Tributaries is a type of subject that pays 20% of their Energy and Mineral income to their overlord, but do not join their overlord's wars and are free to declare their own wars and colonize planets.
- Abandon Planet: If you have Purge policies allowed, you can force an enemy to abandon a planet, killing all pops on that planet in the process.
- Humiliate: You can humiliate enemy empires, making them suffer a negative modifier and giving you a chunk of influence.
- Open Borders: Forces the other Empire to open their borders towards you for 10 years.
- Stop Atrocity: Forces the other Empire to ban slavery and purging.

Diplomatic Incidents
A big part of the aim with the Asimov patch is to make the diplomatic game more interesting, and have more interaction between neighbouring empires. Diplomatic Incidents is a series of events that can occur between empires which shake up relations, usually related to the actions of one empire towards the others. An example is that an empire might suspect that a foreign science ship surveying inside their borders is there to spy on them, and will demand humiliating assurances from the owning empire that their secrets are safe, or else close their borders to the 'transgressor'.

That's it for today! Next week will be the last development diary before we all disappear on vacation, and will talk about what the future holds for Stellaris.
Last edited by a moderator: Jun 20, 2016
Reactions:

Also are there many of those Incidents?
Toggle signature
2D Art - Mesoamerica Universalis
https://forum.paradoxplaza.com/forum/index.php?threads/mod-mesoamerica-universalis.970935/
http://steamcommunity.com/sharedfiles/filedetails/?id=861977085​

Also are there many of those Incidents?
Click to expand...

Just a few right now, but we plan to add more over time.
Toggle signature
For every complex problem there is an answer that is clear, simple, and wrong.

I did not think this was going to drop before July vacation.
Toggle signature
r/CrusaderKings Discord - Active daily, MP games, memes, history discussion.

These sound like good steps forward, though there's still a conspicuous lack of ways to negatively interact with possible enemies other than open warfare.
Reactions:

Stop Atrocity: Forces the other Empire to ban slavery and purging.
Click to expand...

Sounds like something I'll be frequent target for. But what does good guy get if he manages to win?
P.s. What about gene-modding for xenophobes?
Reactions:

Wiz said:
- Abandon Planet: If you have Purge policies allowed, you can force an enemy to abandon a planet, killing all pops on that planet in the process.
Click to expand...

Kudos! This definitely looks like a step in the right direction.
Reactions:

Very cool. Are the purple and yellow skyboxes show in the screenshots going to be part of the base game, or are they from a mod?
I

Wiz said:
Just a few right now, but we plan to add more over time.
Click to expand...

Is that a new system background there or a mod?

Oh, and the 'stop atrocity' goal... How can you tell whether or not an empire is doing either of those things?
Toggle signature
When you're crowded out by freedom's price and you take a shred of bad advice, the system knows but you're kept underground
When you can't afford a flight to Mars, when you were never born to touch the stars, the endless maze of concrete wears you down
Can you theorize our better lives where the grass is green on the other side? We'd compromise and find a way to thrive
If you're scared of being left behind, then you'd be so disturbed with dreams like mine, the realization that our world's alive

Sounds like something I'll be frequent target for. But what does good guy get if he manages to win?
P.s. What about gene-modding for xenophobes?
Click to expand...

Winner gets influence (similar to using humiliate).
Toggle signature
For every complex problem there is an answer that is clear, simple, and wrong.

Tim_Ward said:
Is that a new system background there or a mod?
Click to expand...

Part of Asimov.
Toggle signature
For every complex problem there is an answer that is clear, simple, and wrong.

Some nice changes there.
R

@Wiz Do I notice some prototype ship icons in that map-mode screenshot that differentiate between civilian and military fleets?


Wiz said:
Abandon Planet: If you have Purge policies allowed, you can force an enemy to abandon a planet, killing all pops on that planet in the process.
Click to expand...

I hope in future updates that we might be able to use this to force an empire to resettle their pops humanely (perhaps it should spawn multiple colony ships there or something) for a slightly more passive "I want your stuff and none of your people" option.
Toggle signature
Import-Export PDX mesh and animation toolset for Blender and Maya (download, wiki)
Reactions:

The new battle engagement is so good.
Reactions:

Definitly a step in the right direction! This and pacifism being pacifist definitly add more taste to military or pacific playthrough. I'm really looking for playing again after this update.
Toggle signature
"It came to me when I tried to classify your species and I realized that you're not actually mammals. Every mammal on this planet instinctively develops a natural equilibrium with the surrounding environment but you humans do not. You move to an area and you multiply and multiply until every natural resource is consumed and the only way you can survive is to spread to another area. There is another organism on this planet that follows the same pattern. Do you know what it is? A virus. Human beings are a disease, a cancer of this planet. You're a plague and we are the cure."
Agent Smith
Reactions:

Does diplomacy map-mode show alliances and federations that you are not a part of?
Toggle signature
"There is no such thing as an unbiased argument - indeed, facts support bias', or else they wouldn't exist." - Grand Historian

And please... DO NOT STOP WRITING NEW EVENTS. Every major or minor update should add a dozen of events. Not necessarily complex chain events, even simple one-two-screen events could do. But more is better! This game has to have as many cool pop ups as CK2 and EU4 combined.
Toggle signature
My AARs
-------->>> CK2: The House of Zähringen (RELOADED!) <<<--------
-------->>> HOI3: Bismarck's Spirit <<<--------
Reactions:
Show hidden low quality content
You must log in or register to reply here.
Share:
Facebook Twitter Reddit Tumblr WhatsApp Share Link
Top Bottom