Jump to latest Follow Reply
Menu
Install the app
You are using an out of date browser. It may not display this or other websites correctly.
You should upgrade or use an alternative browser.
Stellaris 47716 Bug Reports 27879 Suggestions 17145 Tech Support 2649 Multiplayer 363 User Mods 4458 Stellaris AAR (After Action Reports) Console edition 1140
Previous dev diary Next dev diary
Show only dev responses 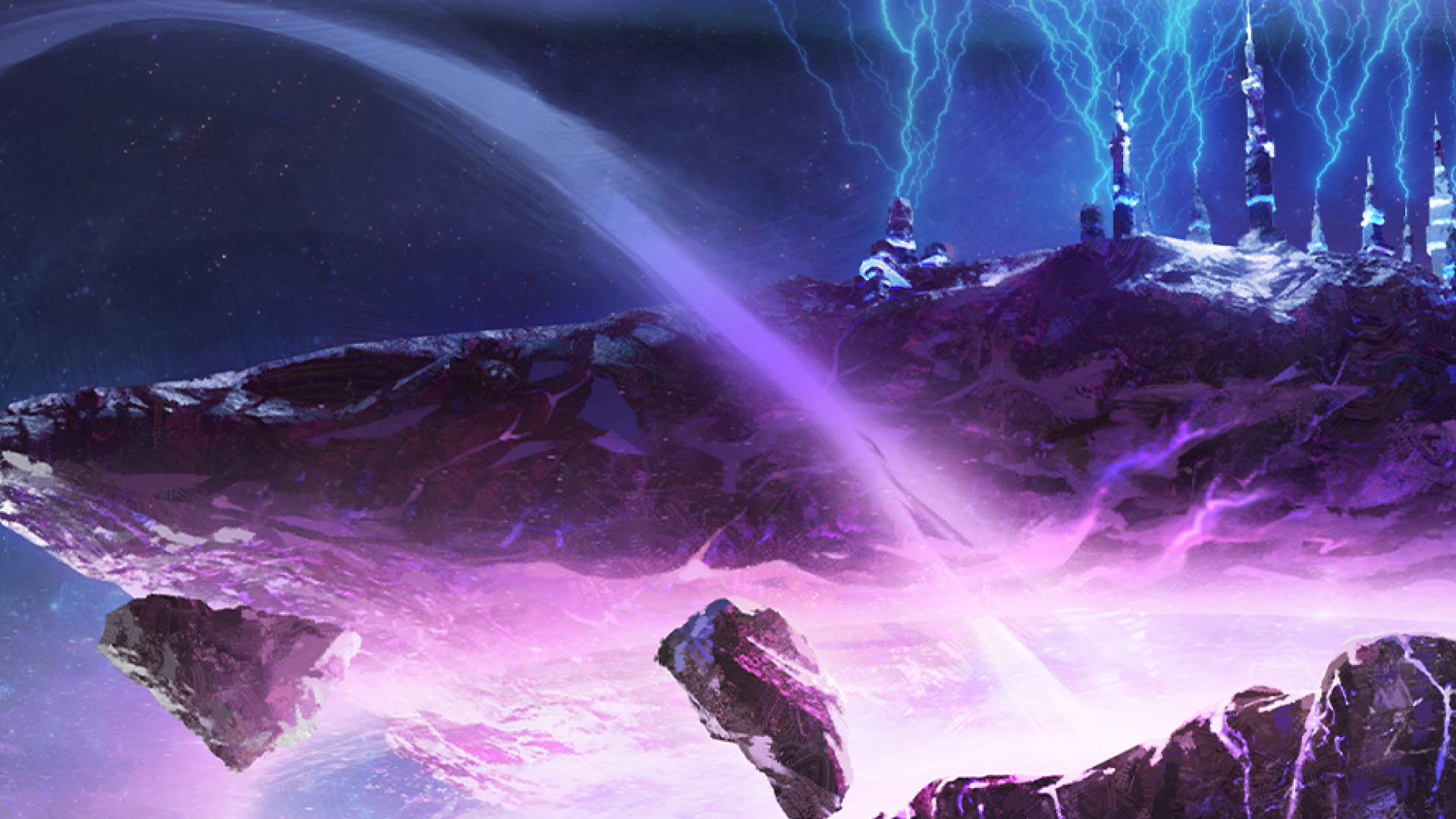 Stellaris Dev Diary #272 - The Pact is Signed and Spoken

We have a few things for you today. First, Mr. Cosmogone will delve into the mysteries of the Shroud, then Monzun will show off a new accessibility feature, and finally I’ll give some updates on the Orion Open Beta.

Mr. Cosmogone, high speaker of the Instrument of Desire, here to share tantalizing tidbits about the upcoming Covenants rework.

First of, a little bit of context for those among you unfamiliar with Covenants: currently in the game, after completing your Psionic ascension, you are granted access to the Shroud, a mystical dimension where all psionics draw power from.
Upon exploring the Shroud, you encounter random events, one of which would let you make a bargain with an eldritch entity. This would give you an empire modifier, and every 25 years or so, there would be a price to pay.

The new ascension rework (currently testable in our open beta) made it so that at the end of the tradition tree you would get a shot at forming a covenant without having to explore the Shroud so much.

I liked both these things, but felt that we could go a little further with this. 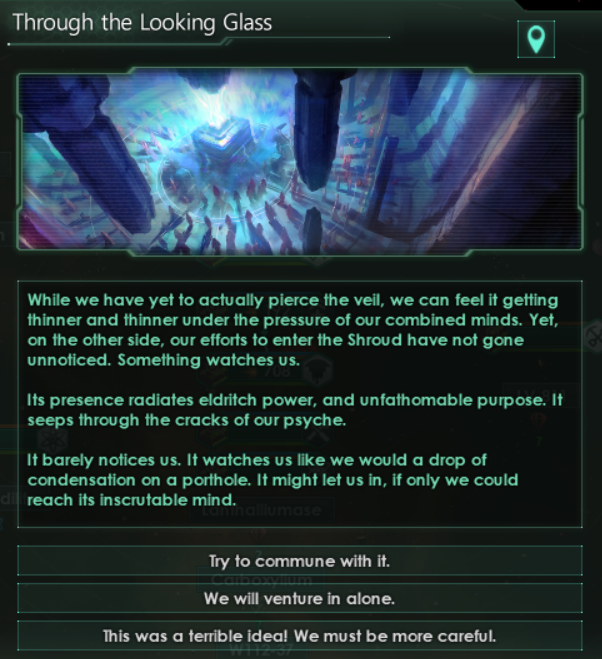 We are only ants feeding off crumbs​
In the rework, upon first attempting to breach the Shroud, you will get a chance to form a covenant with one of the current entities, chosen semi randomly (the chances vary depending on your ethics, civics, traditions, APs and more). You can refuse them and venture in the Shroud on your own, but accepting will give you a weaker version of the current covenant modifiers. 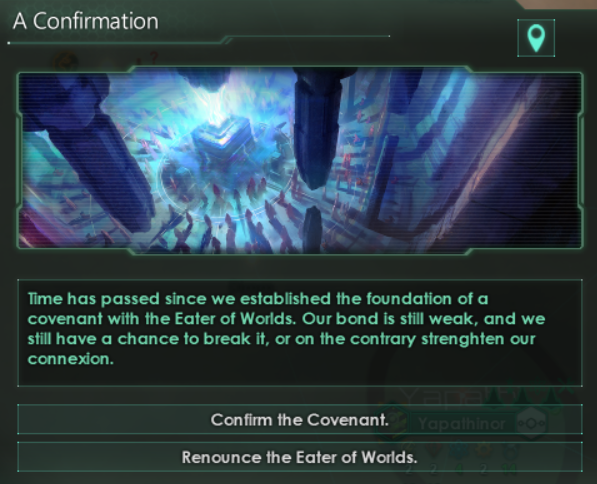 I’m sure nothing can go wrong​
A while later, you will be prompted to confirm the Covenant. Refusing removes your patron and their modifier, but accepting will give you a situation log entry about the covenant, and you will slowly start increasing in covenant rank as your empire attunes telepathically to its patron.

Every patron provide different bonuses, but they follow the same structure: 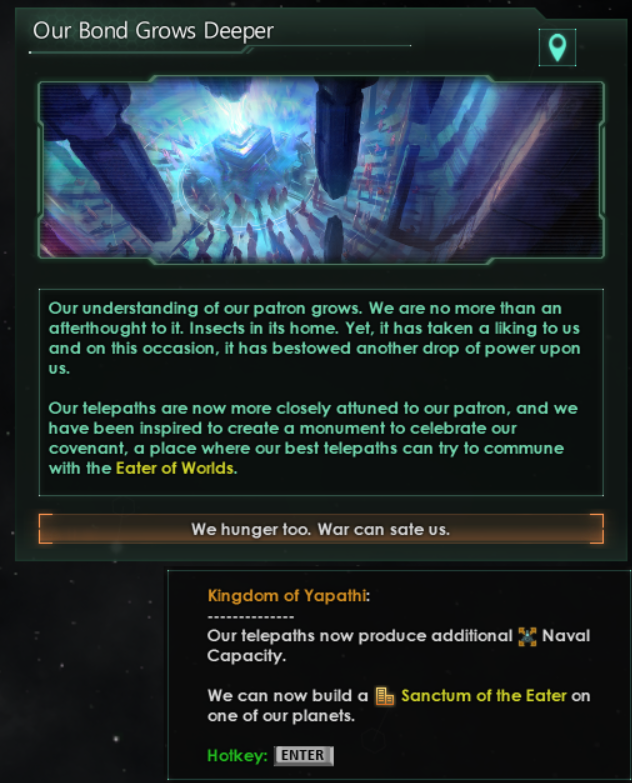 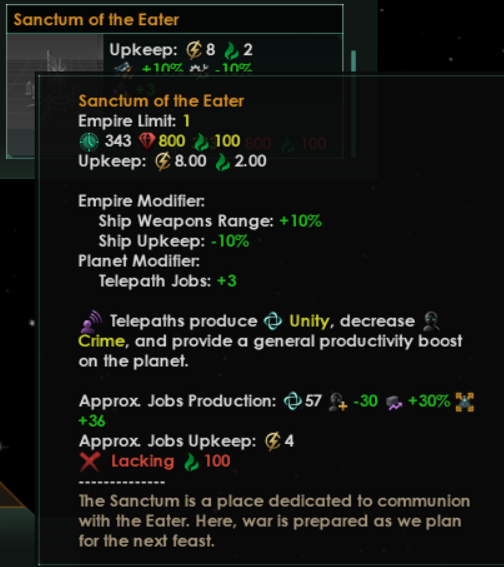 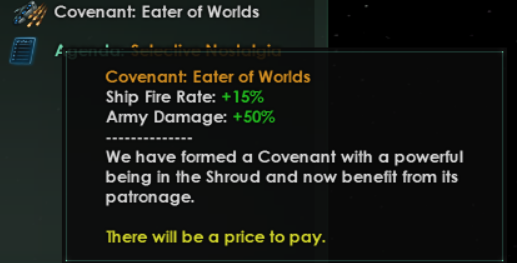 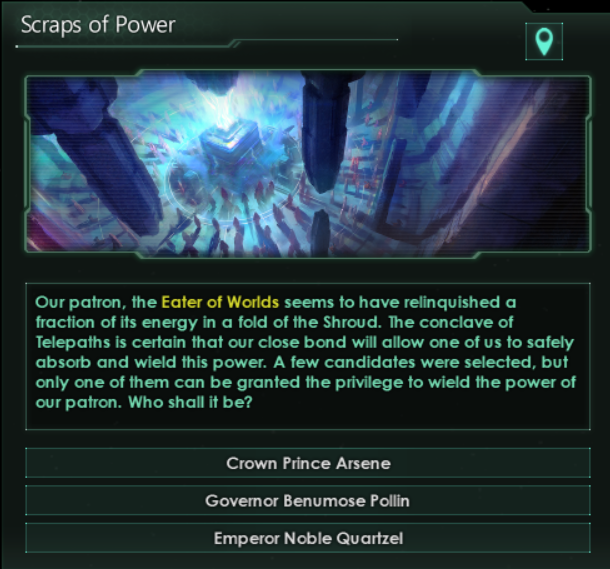 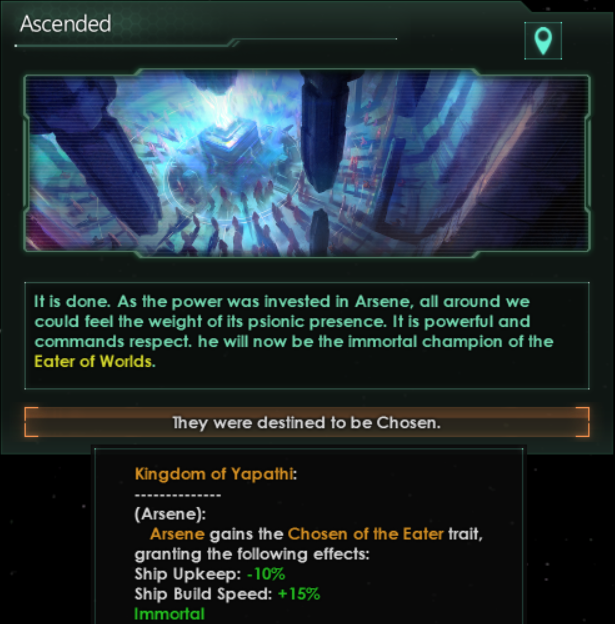 Here is a detailed table with all the bonuses:

And here is the chosen table:

The speed at which you progress is based on how well your ethics, traditions, civics, AP and actions match with your patron. On average, it should take you about 50 years to fully attune to your patron and unlock all the benefits of your covenant. Progress is voluntarily hidden. You’re dealing with eldritch entities after all.

There will of course be a price to pay, and many of the current events have been changed to provide additional variety and hopefully be more balanced.

To accommodate these changes, a couple things have moved around in the psionic tradition tree: 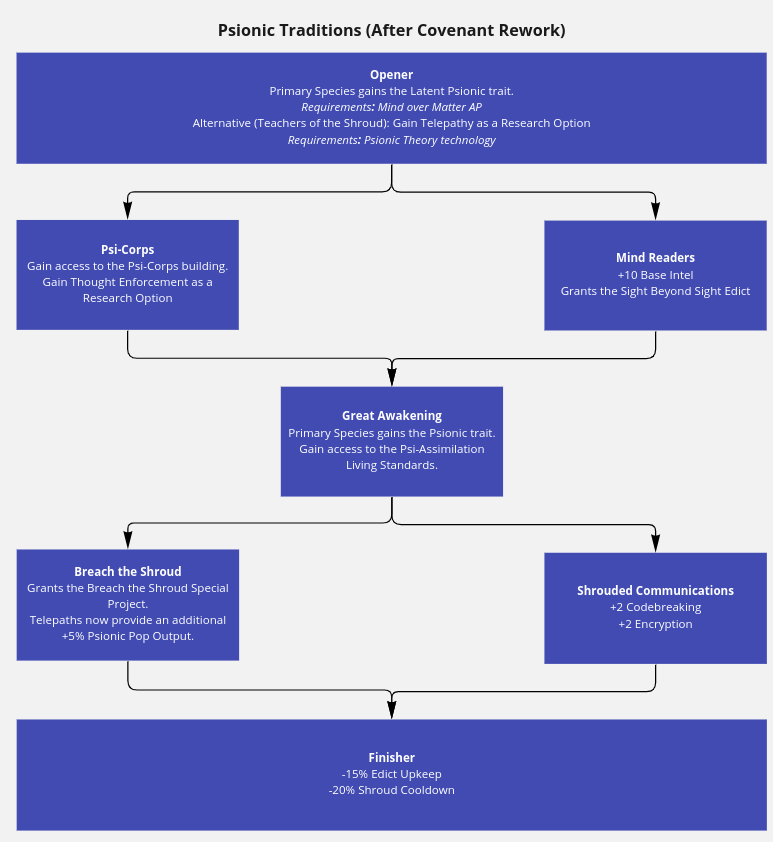 Lastly, for those among you who wish to pick a specific patron, an option has been added to the Shroud, where instead of venturing into the Shroud, you can pay a hefty amount of Zro to attempt to contact a specific entity. This entity may or may not be happy to see you and willing to make a bargain at this time, but in case of failure, you can try again as many times as you want until you get your patron of choice.

He who controls the Zro, ...​
As a side note, the End of the Cycle has not been touched by the rework, but still has a chance to show up at any point where you try to contact an entity

Hello, I'm Monzun, one of the programmers on the Custodian team and I'm here to tell you about the extended Text-to-Speech(TTS) functionality being added in this update!

If you navigate to the accessibility tab in the settings menu, you will find an option simply titled "Text to Speech".

Enabling this will add a small button to certain interfaces in the game where there is a significant amount of text and clicking it will have the text read out loud by your operating system default TTS voice. 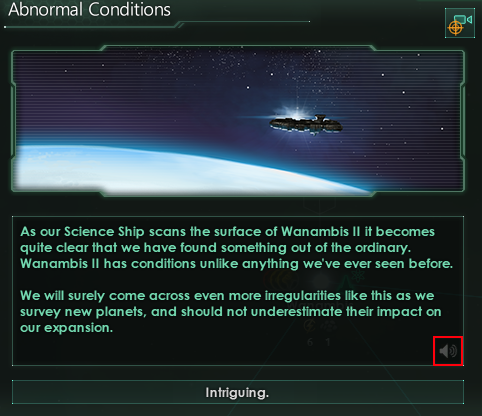 The purpose of this is primarily to allow players who struggle with reading long texts, to enjoy the quite sizable amount of written content in Stellaris.

Keeping to my style of primarily communicating through bullet point lists, here's some additional information about TTS in Stellaris.

We hope that this addition will be helpful and I'm looking forward to reading what you think about it!

We’ve added another feedback thread for Text-to-Speech and have also made a few updates based on the first week.

The Open Beta should already be updated with these changes!

Go forth and keep providing feedback!


Please note that the 3.6 "Orion" Open Beta is an optional beta patch. You have to manually opt in to access it.
Go to your Steam library, right click on Stellaris -> Properties -> betas tab -> select "stellaris_test" branch.

Don't forget to turn off your mods, they will break.​
Reactions:

Great to see an option for us to pick the covenant that suits the empire the RNG can be such a let down.

Are there any changes to the rarity of Zro distillation? In my recent game I had Zro within my empire and had psychic scientists yet I still didn't get it til the late game. Maybe if you decline the first covenant it can unlock it as a research option?
Reactions:

Is it possible to contact the End of the Cycle directly? Or is that option not provided when selecting an entity?
Reactions:

How's compatibility with current beta saves? Specifically, in my case, those that took first 3 traditions in Psi tree?
Toggle signature
Pharma and Medical MegaCorps
A

Ngl picking the covenant and the levels etc is pretty sweet option. Perfect for roleplaying. I would have some questions tho:

- Does renouncing/breaking the pact block you from signing a new pact with the same entity, while the others will keep on being available?

- is the End of the Cycle still considered a Covenant or not? If so, would it have similar "levels" or nah?

- any possible bonus for staying neutral or lack of "prices to pay" considered big enough bonus?

- any possible new Covenants? Maybe a special one, when you have Zroni precursor?
Last edited: Oct 20, 2022
Reactions:
E

This is incredible but will we ever see the day we can trade systems with the AI?
Reactions:

I'm really happy to see you reworking the covenants. You got really creative with it and included a bunch of interesting and good options. Looks really nice! The tradition tree also looks much better now.

A quick question: Is it possible to renounce a covenant after it has been confirmed and progressed to a higher level? Violence is acceptable here.
Reactions:

Eladrin said:
Decreased Missile Accuracy from 100% to 85%
Click to expand...

How do missing Missiles work? Are they "doomed" when the miss is rolled, like instant hit weapons, or can they retarget after missing or if the 'not yet missed' (as in not reached yet) ship is destroyed?

Do swarm missiles keep their 100%?
Reactions:

Eladrin said:
Hrozgar of the Endless Flames will now befriend those that have finished Cybernetic or Synthetic traditions.
Click to expand...

What does that mean? Was there a bug where the dragon wouldn't contact empires with finished or Cybernetic or Synthetic ascension, or is this something special just for those empires?

I am again, pleasantly surprised by the latest additions to this game. I just sent a message to a heavily dyslexic/hyperactive friend of mine who had Stellaris for months but wasn't able to appreciate it without external help, this is going to be really helpful to have TTS directly integrated in game. I only hope it will be available in other languages than english, because he only speaks french. Many thanks!
Reactions:

Eladrin said:
Here is a detailed table with all the bonuses:


And here is the chosen table:

I like a lot this rework, it makes the whole covenant thing much more appealing, both mechanically and storywise, than it was previously.

However I think it would have been interesting if the rework could have provided the Composer of Strands as a way to do Organic Pop Assembly to Psionic Empires. Currrently as a Psionic Spiritualist you have to build Robots to stay competitive Pop-wise, which your Traditionalist faction despises, and now that they don't benefit anymore from the Telepaths feels like a way to build organic pops is needed.

I still think that the benefits of the Ascension Perks and the Adoption of the Tradition Trees should be swapped (not only for the Psionic path but also for the Cybernetic and Biological paths), the APs should give you a greater feeling of accomplishment than they currently do imo. Doing so would also remove the need to do a tradition swap for the Teachers of the Shroud Origin.
Last edited: Oct 20, 2022
Toggle signature

On the one hand I wanted more, not less, incentive to go shroud diving, but on the other hand I'm very excited to finally find out what these covenants are like!

e: this came across as overly negative, these look like really neat changes and I'm looking forward to trying them out.
Last edited: Oct 20, 2022
Reactions:

It is very cool!

The purpose of this is primarily to allow players who struggle with reading long texts, to enjoy the quite sizable amount of written content in Stellaris.
Click to expand...

I see you've been watching Lathrix's playthroughs as well.
Toggle signature
The universe is probably littered with the one-planet graves of cultures which made the sensible economic decision that there's no good reason to go into space - each discovered, studied, and remembered by the ones who made the irrational decision. - Randall Munroe
Two possibilities exist: Either we are alone in the Universe or we are not. Both are equally terrifying. - Arthur C. Clarke.

Oh wow. You guys just keep firing on all cylinders. Great stuff.
Haven't tried the beta yet since I'm catching up with achievements. Almost there...

Ok. I didn't expect such a HUGE and cool rework. I love it! Especially that the chosen is now directly tied to this path with it's own unique abilities blows my mind. I was really hoping for something like this.
Toggle signature
~Mind over Matter~

I have never seen so much feedback being made into patch notes, I have been following all feedback threads and my goodness, you people really made it happen, and so fast! Love the rebalances, covenant and cyborg buffs were really needed!

Thank you, I think you're all the best devs Stellaris ever had.
Reactions:
E

These are amazing changes!
Do the random events still happen or have these been replaced with the maluses on the covenant?
Will the Devourer get its event changed? Loosing a pop or a planet altogether can be devastating, especially compared to the other patron’s events being annoying at best.
Is there a chance it could be changed to planetary devastation/loosing pops instead of loosing pops/loosing a planet? Otherwise the Eater’s price is far too steep compared to everyone else’s and generally not that worth it.
Either way great job with the changes, love how the Patrons don’t feel just like modifiers now.