Jump to latest Follow Reply
Menu
Install the app
You are using an out of date browser. It may not display this or other websites correctly.
You should upgrade or use an alternative browser.
Stellaris 46274 Bug Reports 26331 Suggestions 15807 Tech Support 2537 Multiplayer 356 User Mods 4375 Stellaris AAR (After Action Reports) Console edition 1102
Previous dev diary Next dev diary
Show only dev responses 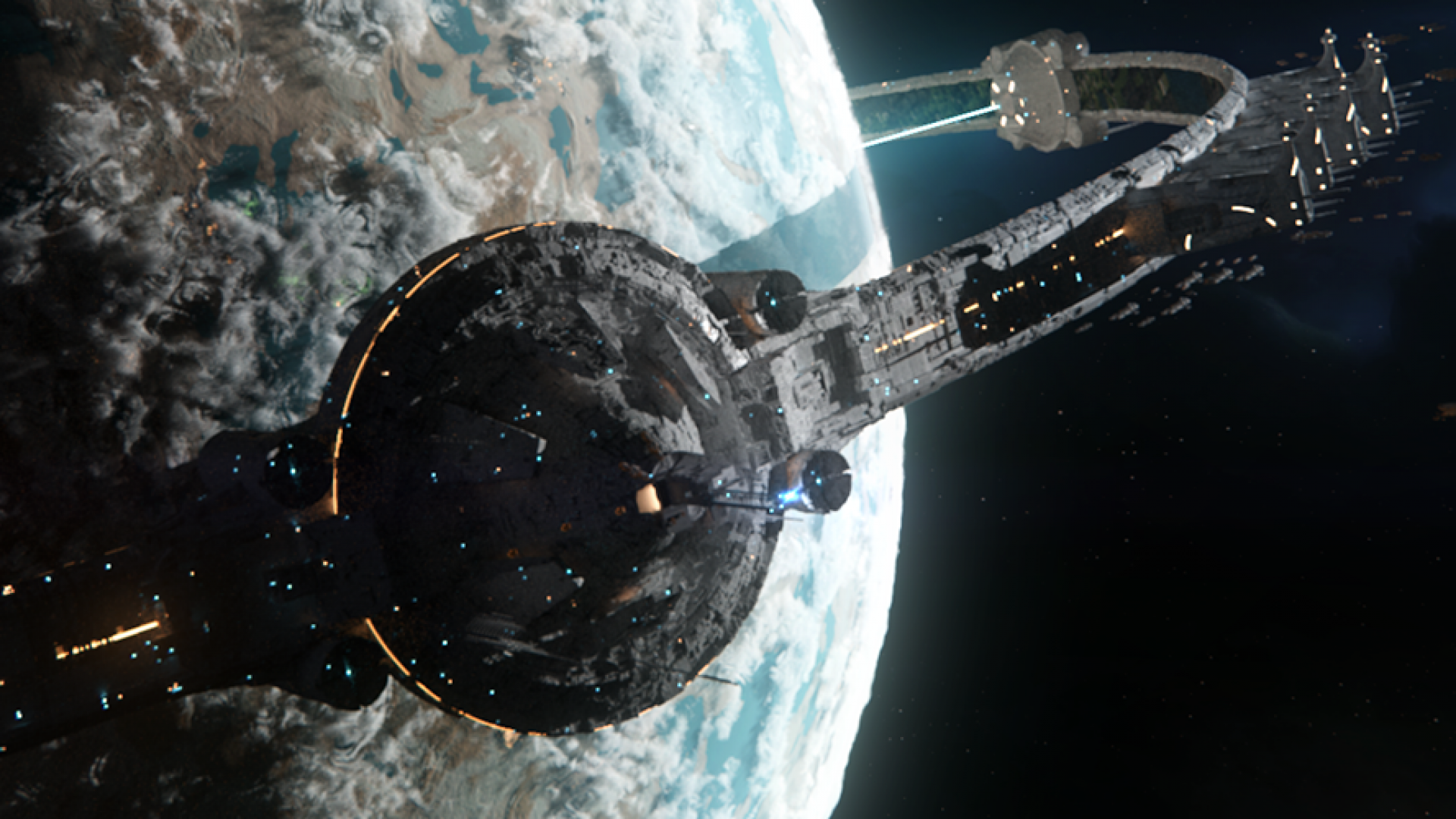 Last week’s dev diary examined the Orbital Ring, Quantum Catapult, and Scholarium. Today we’re going to look at another construction that has a massive impact on the game, the Hyper Relay. After that we’ll look at some other changes coming in Cepheus and Overlord, and finish off with another origin that was revealed yesterday by Nivarias.

As with all previews, numbers, text, and so on are not quite final and are still subject to change.

Long ago, back in Dev Diary #243 we showed you some concept art of Hyper Relays, and told you they had greebles, and were game changing. Now it’s time to fully reveal them.

Hyper Relays are a rare Tier 2 technology that require the Hyperlane Breach Points technology and access to Rare Crystals to discover. Once you have observed a functional Hyper Relay in use by another empire, the technology will appear much more frequently, causing them to spread in a pleasing manner across the galaxy.

Hyper Relays can be built by your Construction Ships outside the gravity well of systems, just like Gateways. They’re useless on their own, but a chain of Hyper Relays built in adjacent systems dramatically speeds up travel, allowing you to jump from Relay to Relay after a short windup rather than having to travel across each system at sublight speed, as long as neither endpoint is controlled by a hostile empire. 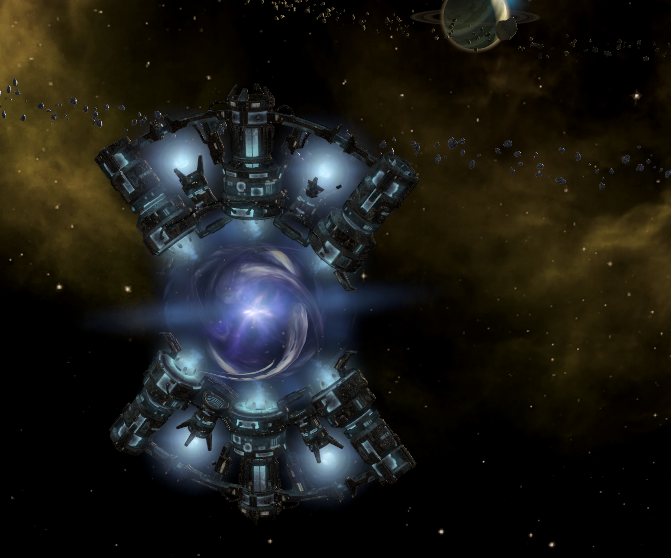 Once two Relays in adjacent systems have been linked, the hyperlane between those systems will become bolder, and ships traveling along them will show the route plotted in blue as they are using the bypass.

Hyper Relays can be built in your own space, or that of your subjects. For convenience, Relays can also be built directly from the Galaxy Map. 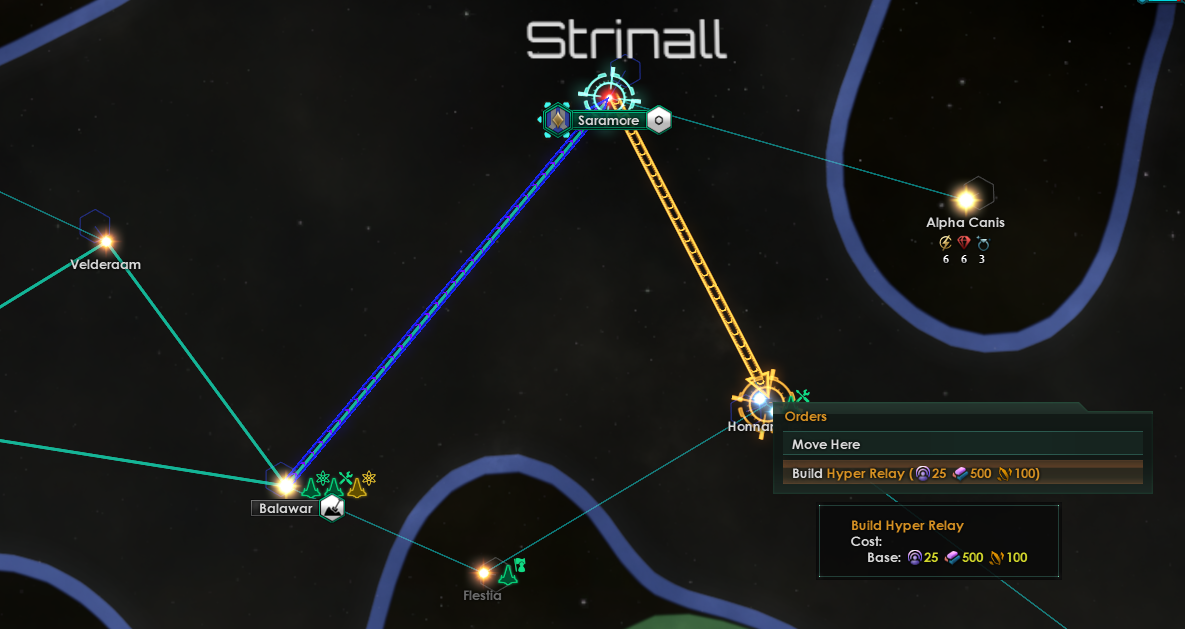 If an Empire’s capital is attached to the Hyper Relay Network, additional effects can be projected through the network using several Network Edicts. These add strategic resource upkeep to your Hyper Relays and an effect on all of your colonies that are connected to your capital. 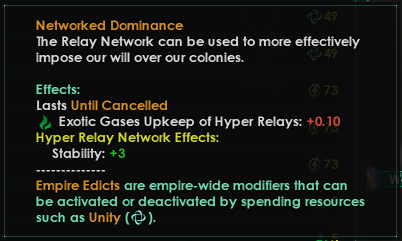 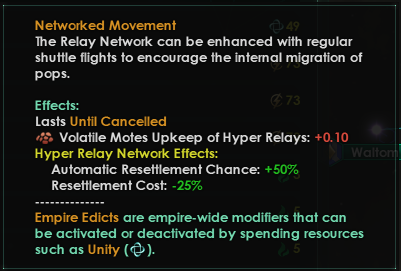 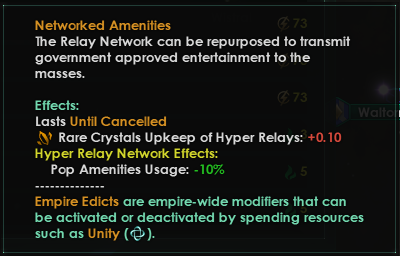 Gestalts have a reflavored variant of Networked Amenities.​
Specialist subjects each have a Network Effect available at Tier 1, which becomes active in the overlord’s Relay Network if a continuous chain connects their capitals. 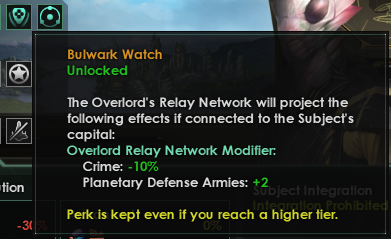 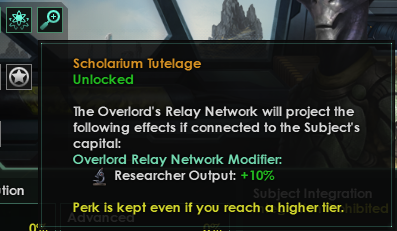 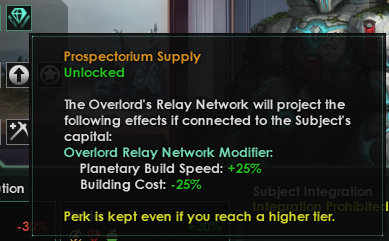 As one could imagine, an expansive Hyper Relay network makes travel much faster during the mid-game while you do not yet have a comprehensive Gateway system built, and since such travel is permitted in neutral empires that have open borders, navigating the galaxy and responding to distant threats is easier than ever before.

As a personal anecdote, after playing with these and the new subjugation mechanics internally, it was almost difficult to go back to 3.3 for the Dev Clash. Made me almost want to blow up the galaxy.

As with every update, there are a number of balance or quality of life changes and adjustments in Cepheus. Here’s a handful of interesting changes.

Some improvements have been made to automated migration. 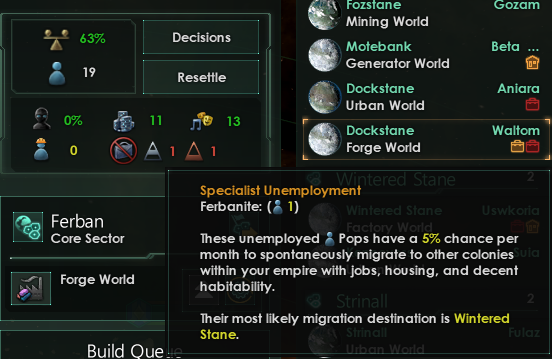 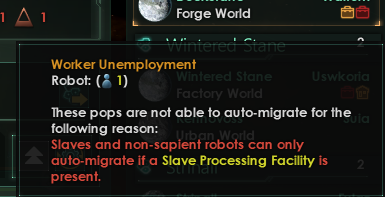 We have eleven new achievements in Overlord. Here are the icons, I’m curious what people think they are.

Some eagle-eyed readers have noticed some flags that aren’t possible in 3.3. You’re correct! The art team has added some new colors to the flag palette… 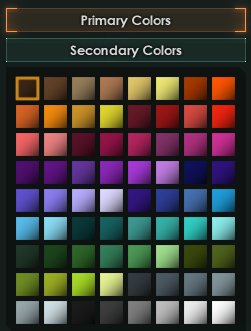 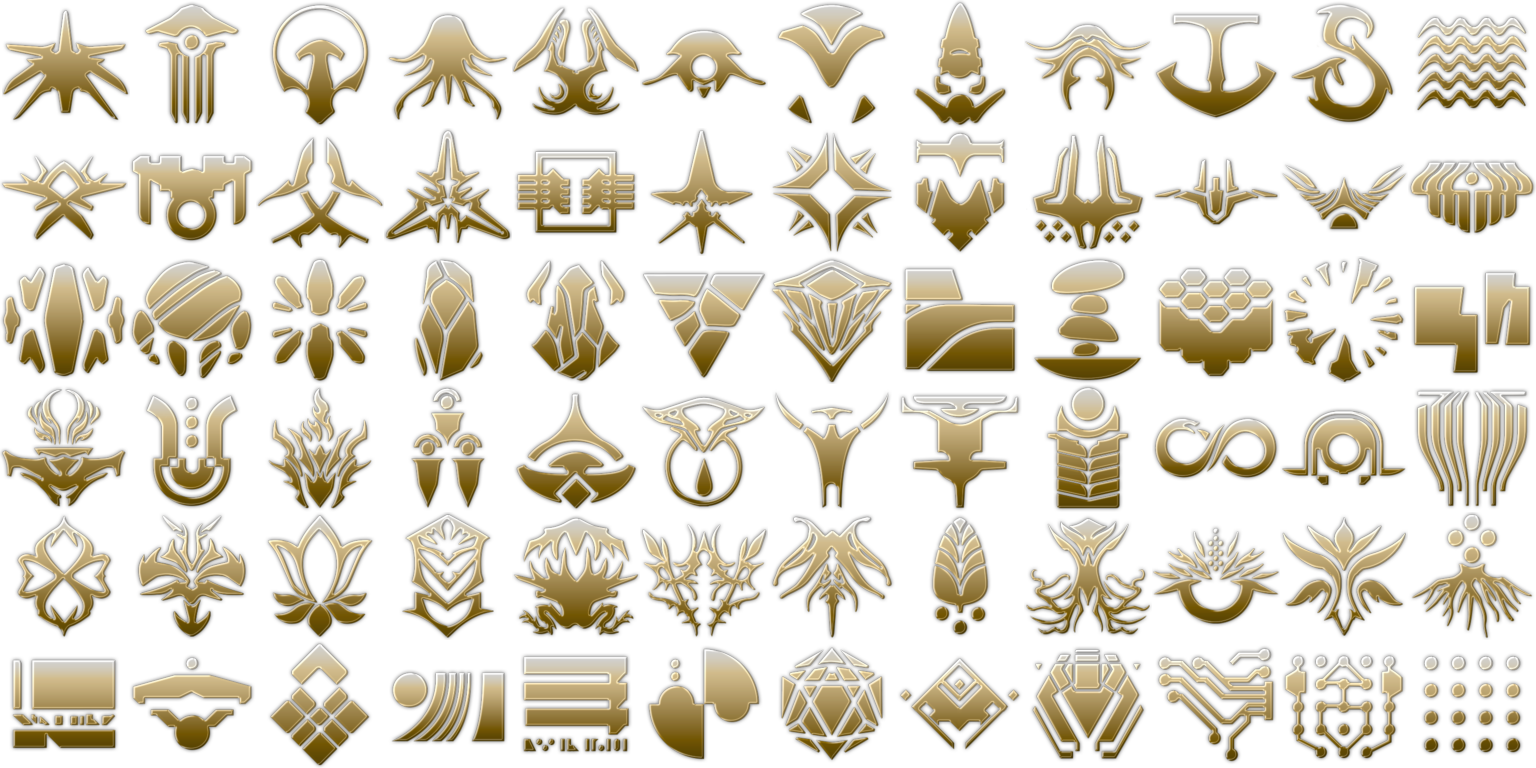 These will all be part of the Cepheus update as part of the May anniversary celebrations.

Slingshot to the Stars​ 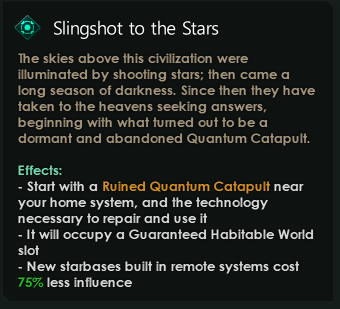 Bordergore? Bordergore.​
Those born under the Slingshot to the Stars find their desires to explore fulfilled by a nearby Quantum Catapult, which replaces one of their Guaranteed Habitable Worlds. Their eagerness to explore into the unknown reduces the distance penalty for building starbases in remote systems by 75%.

Next week the totally human programmer @Narkerns will take over for an update on AI and automation improvements coming in Cepheus, and I’ll add a little bit about a fourth Origin at the end.

Video versions of these dev diaries are available at the Stellaris Official YouTube Channel. Subscribe so you don’t miss them, and wishlist Overlord if you haven’t already!

In the meantime, keep your eyes on our social media channels. There'll be an announcement later today.

I love the customization!
Reactions:

hype is indeed building up
Reactions:

If a subject and an overlord have a subject network, will they merge? Or will the overlord only take the bonus and leave the subject with it's own network without bonus?
Toggle signature
I failed for 20 minutes to upload an image for my profile, pls dm me if you know how to
Reactions:

I love how you're implementing new ways to travel, like the quantum catapult and the hyper relay network! This is gonna add a whole new dimension of strategy and also reminds me of all the different modes of transport we used to have before hyperlanes. This is easily the most anticipated Stellaris DLC in a long time, and that's not even mentioning all the changes to subjects and the EU4 inspired disasters. Being able to nominate the custodian is also going to be so helpful for getting Sic Semper Tyrannis, which is the only achievement I haven't bothered getting becaude it's too tedious.
Last edited: Apr 21, 2022
Toggle signature
“You’ve got to be cocky, because otherwise you have nothing to look forward to in life.”
-A very inspirational man
Reactions:

I came for the hyper relays, I stayed for the flags
Reactions:

Massive fan of the relay network! Super excited for the new achievements as well. We can now nominate other empires to be custodians, but is this feature extended to the galactic empire/other custodian resolutions as well?
Reactions:

Eladrin said:
Hyper Relays can be built by your Construction Ships outside the gravity well of systems, just like Gateways. They’re useless on their own, but a chain of Hyper Relays built in adjacent systems dramatically speeds up travel, allowing you to jump from Relay to Relay after a short windup rather than having to travel across each system at sublight speed, as long as neither endpoint is controlled by a hostile empire.
Click to expand...

Could you guys include a short gif to show how faster it is?

Eladrin said:
You can now nominate other empires to Custodianship, provided they meet the requirements.
Click to expand...

Thank goodness, now the achievement will be controllable and reasonable. Thanks for the update.
Reactions:

If the sushi achievement doesn't reference George Bush Sr's disastrous Japanese dinner I will consider it a missed opportunity.
Reactions:

Stellar Game said:
Massive fan of the relay network! Super excited for the new achievements as well. We can now nominate other empires to be custodians, but is this feature extended to the galactic empire/other custodian resolutions as well?
Click to expand...

What could also be interesting here is getting an emperor into position, and then having hem declare you as the charter. It would be neat to have a way for the player to direct this sort of action (without the use of console commands.)
Reactions:

Eladrin said:
As a personal anecdote, after playing with these and the new subjugation mechanics internally, it was almost difficult to go back to 3.3 for the Dev Clash. Made me almost want to blow up the galaxy.
Click to expand...

Made you almost want to blow up the galaxy?
I'm pretty sure you wanted it alright, the "almost" had more to do with the succeeding part
Last edited: Apr 21, 2022
Reactions:
E

i assume the answer is yes, but networks on conquered enemy systems count as yours, right? do they also get that pesky upkeep increase from the edicts or do relays on occupied system not get said increase in upkeep? i assume vassal networks can also be used, but what about the ones in friendly empires, or just empires we have open borders with?

Please tell me Gestalts can turn automatic resettlement off. Also, out of the 3 Network edicts to remove, how come you went for the Amenities one (really useful for getting an extra district out of Ring Worlds and everything else while using 30 pops less) rather than the automatic resettlement one, which often has me resettling pops back because the resettled pops have opened up jobs on the original planets?
Reactions:

Yellow briefcase for unemployment is the best change here honestly.
Toggle signature
Big list of all my ideas (50+)
Reactions:

Sorry we need to blow up Sol III, as it is in the way of our new Hyper Relay network connecting several important capitals of the galaxy. You will be duely compensated, as long as you filed the 38 neccessary papers at the galactic community site gamma four galactic rotations in advance. Remain on the surface during "clearance" of the planetary body at your own risk. If no administrator is available you may simple make an appointment. The next free slot is available in two galactic rotations. There will be no compensation or special treatment for delayed forms. We all had enough time here, let's be honest.

(yes I am german )
Reactions: