Jump to latest Follow Reply
Menu
Install the app
You are using an out of date browser. It may not display this or other websites correctly.
You should upgrade or use an alternative browser.
Stellaris 46067 Bug Reports 25989 Suggestions 15612 Tech Support 2522 Multiplayer 355 User Mods 4365 Stellaris AAR (After Action Reports) Console edition 1094
Previous dev diary Next dev diary
Show only dev responses 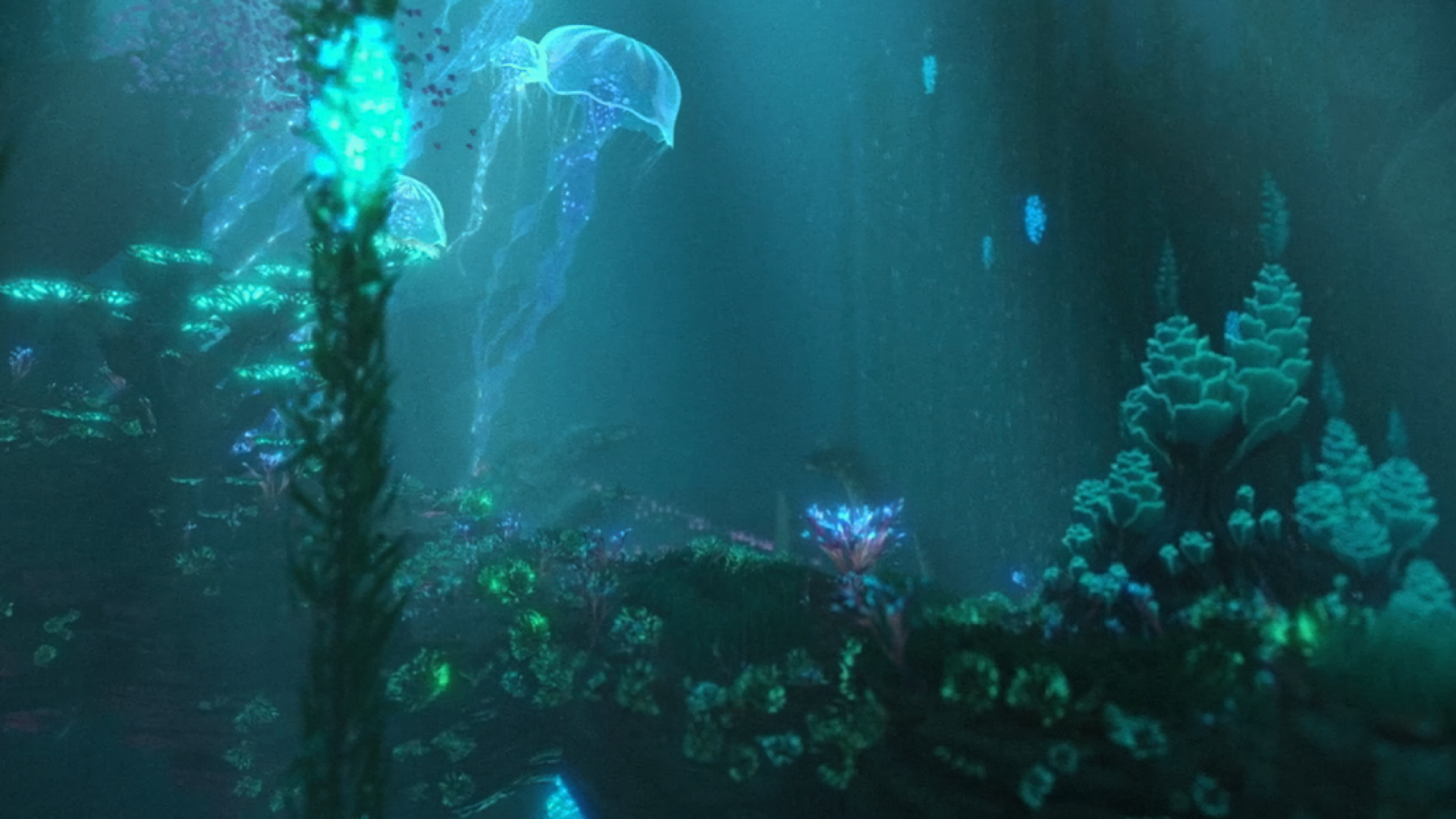 Today we’re back to talk a little bit about the recent news that has no doubt sent ripples throughout the community by now, namely the newly announced Aquatics Species Pack!


The Aquatic Species Pack will include:
Remember to w(f)ishlist it on Steam right now!

For many years now, I have been forced to play Stellaris without dolphinoids... but no more! I can proudly say that we’ve made the perhaps greatest additions to Stellaris yet!

Dolphinoids have finally been added to the game, and the future is looking brighter than ever before. Dolphinoids have been used in narrative examples during design meetings for many years, even prior to the release of Stellaris back in 2016, so I am particularly happy to see them finally becoming a reality. I hope you will enjoy playing them as much as I will! 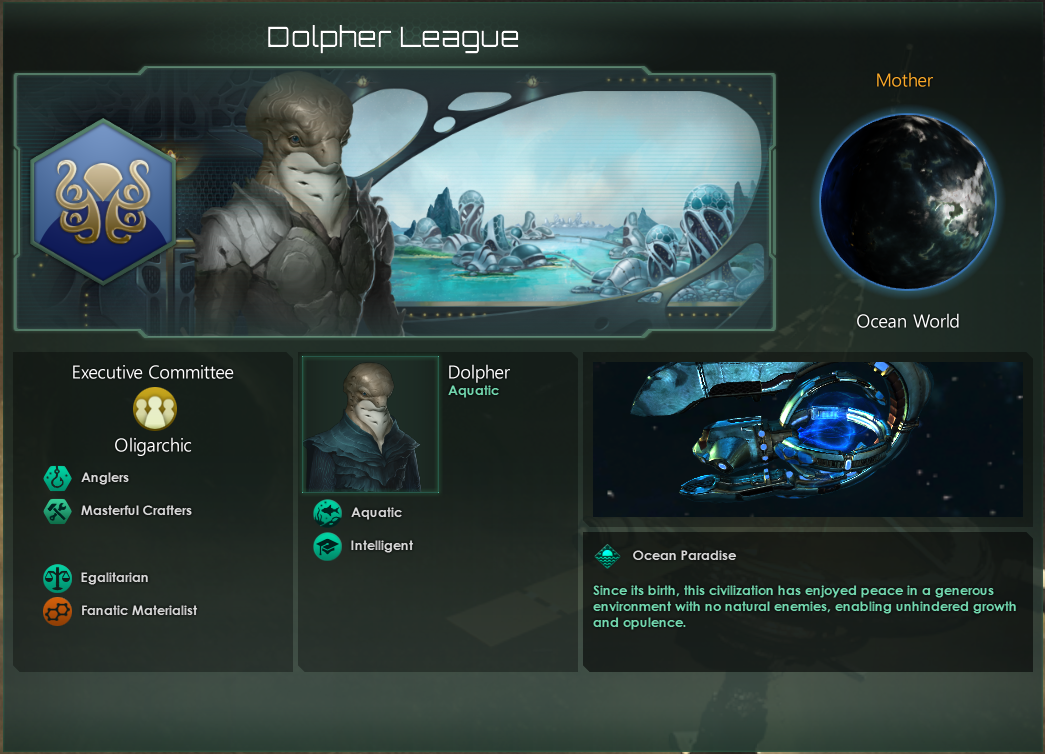 Tidal Wave of awesomeness.​
I’m sure you’re all excited to take a look at the gameplay details, so let’s dive right in!

Anglers Civics
This new Civic will allow you to harvest the bounty of the ocean, by replacing your Farmer jobs with Anglers and Pearl Divers on your Agricultural Districts. The Anglers Civic is also available to empires with a Corporate Authority. 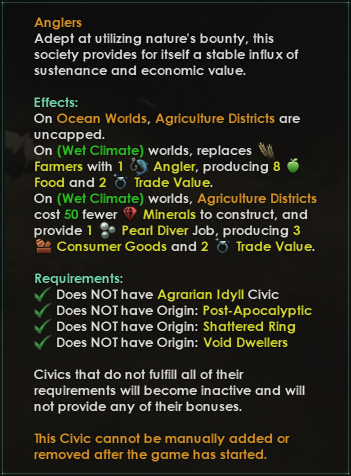 Under the sea, there’s plenty of shinies to see!​
Hydrocentric Ascension Perk
One of our first ideas related to the aquatic theme was to be able to mine ice and bring it back to your Ocean Worlds, to make them larger. The idea originally bounced between being a Civic or an Origin, but we realized it would make much more sense as an Ascension Perk. This is the first time we’re adding an Ascension Perk with a species pack, which in itself is also fun. 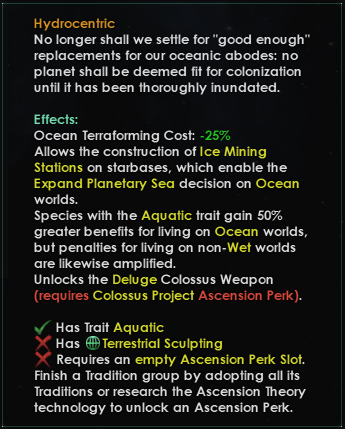 If you live underwater, raising the sea level can be quite useful.​
As you could see in the trailer, the Deluge Colossus Weapon can be unleashed to create a watery grave for your enemies! Ice Mining stations will increase mining station output in a system, as well as enable the Expand Planetary Sea decision, which will increase the planet size by 1. 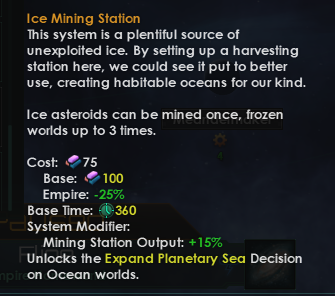 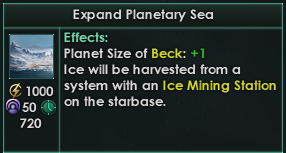 Aquatic Species Trait
We’re adding a new (zero point cost) Aquatic species trait. It doesn’t require you to have an Aquatic portrait, but it will require your species to start on an Ocean World. We hope that this covers those of you who want more freedom of choice for your species portraits, while still keeping the aquatic theme intact. The trait also gains additional bonuses whenever the Hydrocentric Ascension Perk has been selected. 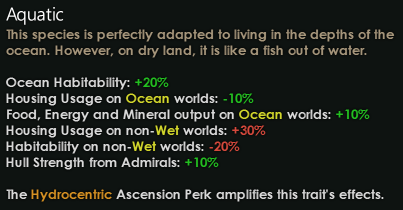 From the deep we come!​
Ocean Paradise Origin
The ultimate watery start, Ocean Paradise allows you to start on a chonky size 30 planet filled with a plentiful bounty of resources. When combined with the Aquatics Species Trait, and the Hydrocentric Ascension Perk, the Ocean Paradise origin gives significant advantages to starting with an Aquatic species. You will want to keep your friends close, and your anemones closer.

You will also start in a nebula and with ice asteroids in your home system. 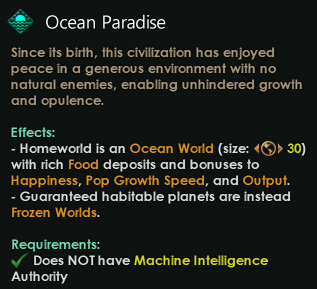 Where there is water, there may be life. Where there is lots of water, there may be lots of life.​
Here Be Dragons Origin
Perhaps the most unique Origin yet, Here Be Dragons starts you off in a unique symbiotic relationship with an Ether Drake. Without spoiling too much, the drake will essentially protect you while you keep it happy. The drake is not controlled by you, but can rather be seen as a guardian ally, as long as you keep it happy. 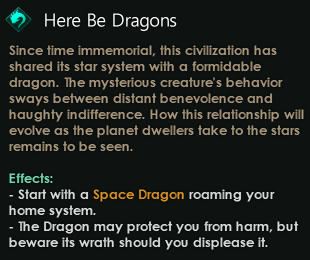 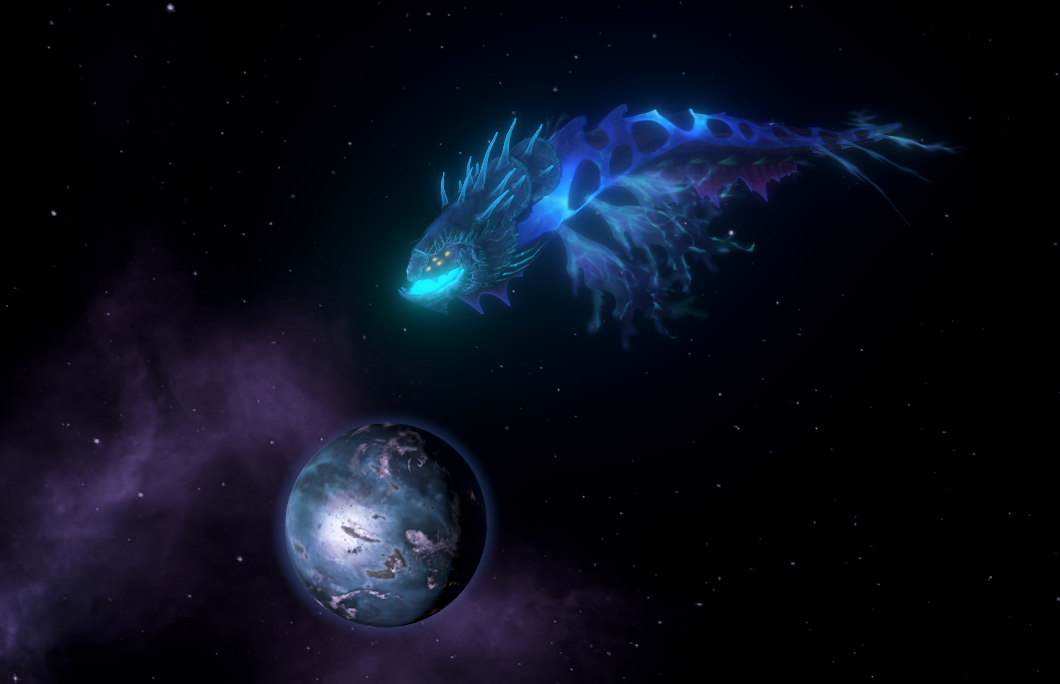 Hostile neighbors? No problem, ol’ Hrozgar will scare them off (at least from your home system)! This unique ether drake features a unique aquatic-inspired appearance.​
----

That is it for this week! I hope you enjoyed this deep dive into the gameplay features. Next week we’ll submerge ourselves even deeper into the Aquatics Species Pack by taking a look at the art behind the aquatic ships and the unique model for the ether drake. 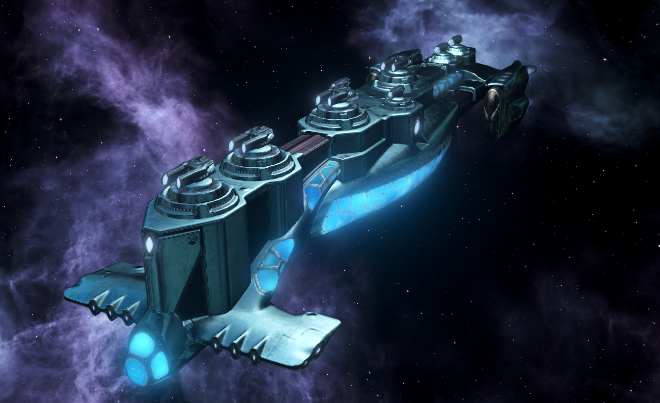 Isn’t she a beauty? Come back next week to learn more about the art in the Aquatic Species Pack.​
Last edited: Oct 21, 2021
Reactions:

Garfazz Steamfang said:
I love the aesthetic and the idea behind this but i ask me some things:

- Is ocean paradise the equivalent of gaia world or ecumenopolis for aquatics?

- Does we get a management of the depths of the planet? Right now we only see the surface of the ocean and we doesn't really have any management or view of the underwater cities, fauna and stuff.

- Will we get an underwater specie screen like the one with planetary diversity and aquatic worlds?
Click to expand...

Ocean Paradise isn't quite the equivalent of an Ecumenopolis, but its certain good in its own right.

We looked into it, but there was no reasonable way to significantly change the appearance of the planet views or diplomatic screens to be dynamic and underwater.

Zoomy said:
Do you need Apocalypse and Aquatics to access the Deluge, or do people with only Aquatics only get access to the Colossus AP too?
Click to expand...

The Colossus is unlocked by Apocalypse, thus you need Apocalypse to be able to use the Deluge.

Squashyhex said:
Will there be a Megacorps variant of the Angler civic? Especially with the pearl diver job, it seems like it would be a good fit.
Click to expand...

The Anglers Civic is available to megacorporations as well.

korvmaskin said:
If the portraits aren’t trait specific why not fit them in to current portrait categories? Unless they look like fish they’d most likely fit into mammalian, molluscoid or other animal kingdom inspired xenotypes. Maybe leave the fish portraits in aquatic and rename the category piscoid.

I'd rather figure out a way to optionally list portraits by either DLC or by "biology" sometime in the future. Ideally portraits could belong to multiple categories.

Ketrai said:
- hydroponics don't require a district slot. And they're arguably essential for farming worlds. Now you won't get any anglers fishing in your plant domes. (Why don't they get algae farms btw? Hydroponics make no sense for a species already living in the hydro part)
Click to expand...

I love the aesthetic and the idea behind this but i ask me some things:

- Is ocean paradise the equivalent of gaia world or ecumenopolis for aquatics?

- Does we get a management of the depths of the planet? Right now we only see the surface of the ocean and we doesn't really have any management or view of the underwater cities, fauna and stuff.

- Will we get an underwater specie screen like the one with planetary diversity and aquatic worlds?
Last edited: Oct 21, 2021
Toggle signature
"It came to me when I tried to classify your species and I realized that you're not actually mammals. Every mammal on this planet instinctively develops a natural equilibrium with the surrounding environment but you humans do not. You move to an area and you multiply and multiply until every natural resource is consumed and the only way you can survive is to spread to another area. There is another organism on this planet that follows the same pattern. Do you know what it is? A virus. Human beings are a disease, a cancer of this planet. You're a plague and we are the cure."
Agent Smith
Reactions:
J

So long, and thanks for all the fish

I was kind of hoping for the new Leviathan to be more unique and I would prefer for the trait to be tied to portraits. I am already annoyed at all the "underwater butterflies" AI empires that I will encounter.

Could we at least add a galaxy generation option "only Aquatic Aquatics"?

Overall though, this seems very nice. I think we are all wondering if the new Advisor will be a pirate.
Toggle signature
Sit now there, and look out upon the lands where evil and despair shall come to those whom thou allied. Thou hast dared to mock me, and to question the power of France, master of the fates of Europe. Therefore with my explorers thou shalt see, and with my spies thou shalt hear; and never shall thou be released from vassalage until all is fulfilled unto its bitter end.

So, in short, the sea will consume us all and there is an ancient old god floating above our world.
Toggle signature
The sole developer who is responsible for the modern-day open-world supernatural RPG called [NEOLITHIC] on Steam.
Can you find this secret game?
Reactions:

I love the decision to make Aquatic trait optional for everyone. New origins excite me very much as well.
Reactions:

I'm reminded of an Irish proverb.

Bíonn a cuid féin ag an bhfarraige - The sea will have its due.
Reactions:

Well, this doesn't seem overpowered in any way whatsoever, and finally we can let Earth's second smartest species start an empire.

There will be a "thanks for all the fish" event right?
Reactions:

Very extensive! When you say that ice asteroids can be mined only once, is it because they will be destroyed afterwards, or simply not be usable for the decision anymore.
Toggle signature
My suggestions: Improving the Galactic Empire
Reactions:

Looks great! I love the idea of the ice mining stuff.
Reactions:

Do you need Apocalypse and Aquatics to access the Deluge, or do people with only Aquatics only get access to the Colossus AP too?
Reactions:

Can we get a look at the new portraits?
Reactions:
J

Zoomy said:
Do you need Apocalypse and Aquatics to access the Deluge, or do people with only Aquatics only get access to the Colossus AP too?
Click to expand...

The sensible thing to do here would be to allow the colossus if you have a weapon, and lock the weapons behind the DLCs.

Ok I love all of this, this is some great new stuff and I wanna try it so badly but Devs hear me out. I'm a lithoid main and a massive lithoid fan so what about an aquatic lithoid (since you guys have allowed necroid lithoids)? It could have a coral looking portrait picture!
Reactions:

Starting in a nebulae... that's it my terravore is going to drown its former desert world
Reactions:

I can already see the Noah meme with Dolphins unleashing flood upon the ancient Earth.
Toggle signature
Be creator. Be conqueror. Be destroyer. Be savior.
THE CHOICE IS YOURStellaris
Reactions:
M

How many times can a planet's size be increased? Can the size 30 planet be increased in size? What is the upper limit?
Toggle signature
Sit now there, and look out upon the lands where evil and despair shall come to those whom thou allied. Thou hast dared to mock me, and to question the power of France, master of the fates of Europe. Therefore with my explorers thou shalt see, and with my spies thou shalt hear; and never shall thou be released from vassalage until all is fulfilled unto its bitter end.