Jump to latest Follow Reply
Menu
Install the app
You are using an out of date browser. It may not display this or other websites correctly.
You should upgrade or use an alternative browser.
Stellaris 46663 Bug Reports 26810 Suggestions 16210 Tech Support 2571 Multiplayer 357 User Mods 4395 Stellaris AAR (After Action Reports) Console edition 1108
Previous dev diary Next dev diary
Show only dev responses

The topic for today is “Alliances and Federations”. Now, we have modelled alliances quite differently in most of our games. In Crusader Kings II, for example, alliances are bilateral, and allies are (since the last patch) automatically dragged into wars with no option of opting out and breaking the alliance. In Europa Universalis IV, alliances are also bilateral, but you can decline a “Call to Arms” at the cost of Prestige. In Stellaris, alliances are multilateral (they can have any number of members, not just two), and are thus more like NATO and less like the complex web of mutual agreements that existed at the outbreak of the Great War. This means that members of an alliance need a greater say in matters that concern the entire alliance, notable declarations of war (and some things are simply not allowed if you are an alliance member, such as guarantees of independence.)

If I am a member of an alliance in Stellaris and I want to declare a war, all the other members of the alliance need to approve. This ties back to what I talked about in the dev diary two weeks ago; if the goals I declare with the war are only beneficial to myself, my allies are of course less likely to approve. Therefore, I will likely have to dicker with the war goals in order to satisfy all of my allies (depending on their opinions and strategic concerns, naturally.) Of course, members can always just leave an alliance (while at peace) if it won’t permit them to achieve their goals. 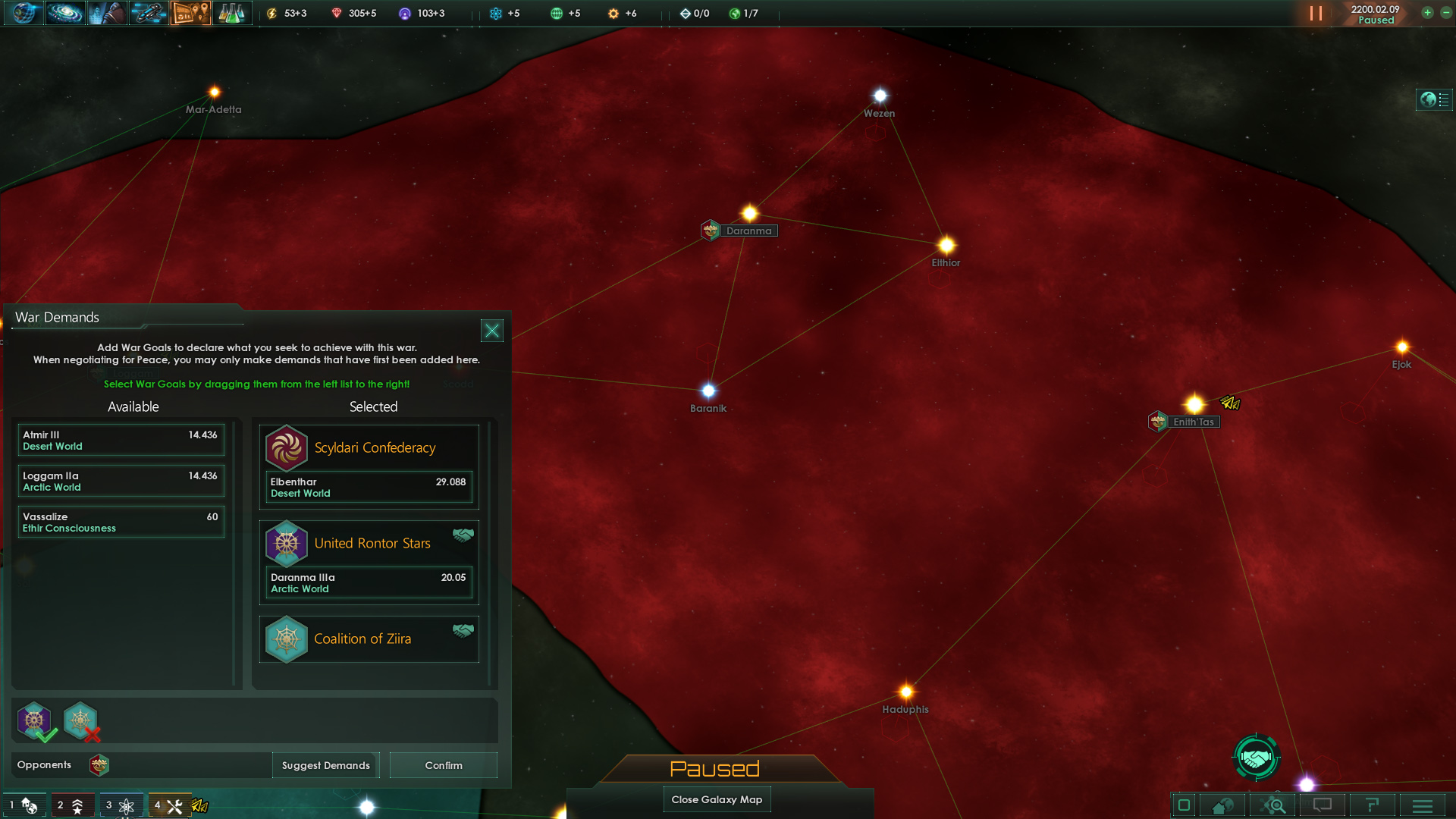 If an alliance works well, however, the members can instead choose to deepen their cooperation and form a Federation. There are pros and cons to this choice. Alliances can be paralyzed by vetoes from the member states, but a Federation is governed by a single President who has the power to act with impunity. On the other hand, the presidency rotates between the member states, so for long periods members will have little control over their foreign policy. Federation members also share victory, which might be a problem for certain types of players…

Another interesting feature of Federations is that they have a special joint space navy in addition to the forces of the separate member empires. The Federation president gets to design these ship templates using all the best technologies of all the member empires. The president also gets to control these fleets, of course. As a rule of thumb, several fairly equally matched empires might want to form a Federation, especially in the face of aggressive, significantly larger neighbors, but it might not be the best idea for empires who are dominant in their own right. Of course, there is also an element of role-playing to the choice… 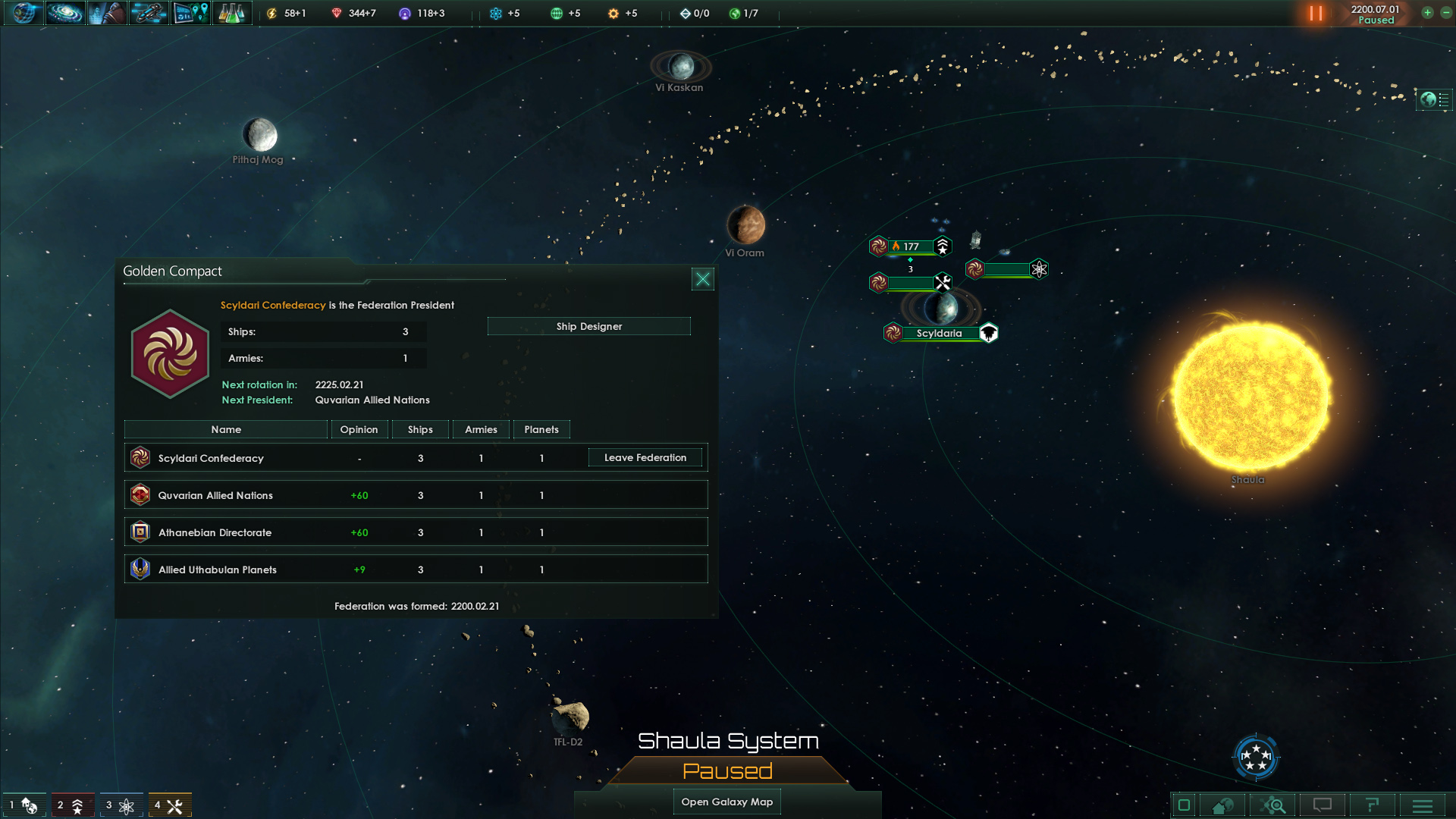 That’s all for now. Next week’s topic is Multiplayer!
Last edited by a moderator: Feb 29, 2016
Reactions:

Nice, so a Republic like in SW is more or less possible :drool:

If you are more powerful than others in your Federation, are you able to take some form of control?
Reactions:

Looks like it is an interesting system!
Toggle signature
User Mod Index: the CK2 User Modification Index for mods, utilities and guides. Post in it to add your new mods or updates.
When the World Stopped Making Sense: developer for this CK2 dynamic & historical Migrational Era mod 476-600 (+) mod created by Enlil - 0.9.13!
Emendatio Historiae Imperatoris: developer for this Imperator: Rome historical and flavour mod.

Will there only the be the option of rotating presidencies, or are other more interactive systems of selecting the next presidents in federations possible?
Reactions:

Latheloi said:
Will there only the be the option of rotating presidencies, or are other more interactive systems of selecting the next presidents in federations possible?
Click to expand...

For release, it will most likely be rotation only.
Toggle signature
Henrik Fåhraeus

Interesting development from EU4. Does this mean that an alliance or federation member cannot declare an offensive war on their own without breaking the alliance first? What happens in defensive ways, do all members have to agree on the defensive side about war goals if it wins? Can't you opt out once the alliance is under attack?

Seems like a big commitment.
Toggle signature
My AARs (Current)

Could xenophobic and imperialist races form a Federation and apply to presidency?
Reactions:

This sounds awesome providing the AI won't do suicidal things as a federation leader. Also will the federation leader swap during wartime and if so do they become war leader or does the nation who declared as federation leader stay as the war leader?
Toggle signature
A man who takes no interest in politics is unfit to live in a land where the government rests in the hands of the people. - P.T. Barnum
Reactions:

When in a federation, if one member state grows sufficiently powerful is it possible to seize permanent contol and "inherit" the other states (kind of like how PUs work in EUIV, but a bit less passive)?
Toggle signature
"It is well known that nothing is such thirsty work as the acquisition of knowledge."
Reactions:
S

Will the rotation be altered depending on the strength of the members, so that strong members of the federation end up being president more often than weak ones?
Reactions:

"If I am a member of an alliance in Stellaris and I want to declare a war, all the other members of the alliance need to approve."

Then it's not like NATO. The US invades all sorts of countries without having to have support from every NATO member. For example, many European countries opposed the Iraq War. It seems wrong to me that such a limiting and unrealistic restriction should be in place.

Also I think that not even giving us the option to break our word and not help our ally - at a huge diplomatic cost, of course - is a bad thing. I didn't realise that CKII has now had such a silly rule introduced. It seems like a backwards step.
Reactions:

Is there a limit to the siza of an alliance? Or could all species join one alliance or a federation even to usher an age of peace a win jointly?
Toggle signature
​
Reactions:

I noticed that there is an option to leave the federation you belong to in one of the screenshots. What would happen if, say, the presidential faction does this? Would it retain control of the federation's ships in a fait accompli? Or would control automatically revert to the federation's new president?

Would each faction in a federation get the highest techs from each of the members, or would those techs be temporary and limited to the federation president designing ships?
Last edited: Feb 22, 2016
Toggle signature
"By the grace of the Almighty, the great Monarch will annihilate heretics and unbelievers. He will have a great army, and angels will fight at his side. He will be like the sun among the stars. His influence will spread over the whole earth. All in all, there will be twelve Kings, one Emperor, one Pope, and a few Princes. They will all lead holy lives."

So if I'm in a large alliance group can I declare a separate war without them or will it still need to get approval
Reactions:

Pyramid_Head said:
Could xenophobic and imperialist races form a Federation and apply to presidency?
Click to expand...

The presidency does not sounds like a democratic position, nor are federations democratic by default. Only a third of nations will be democracies, so certainly other types must be able to mix and match... Strange thing, the space Yeti Pope leading with the Octopusman Prime General-elect.
Toggle signature
My AARs (Current)

Do all allies need to agree for a war to start or just the majority? So if I have 3 allies, do I need to appease just two of them or all three?
Toggle signature
Ancient Greek Name List for Stellaris