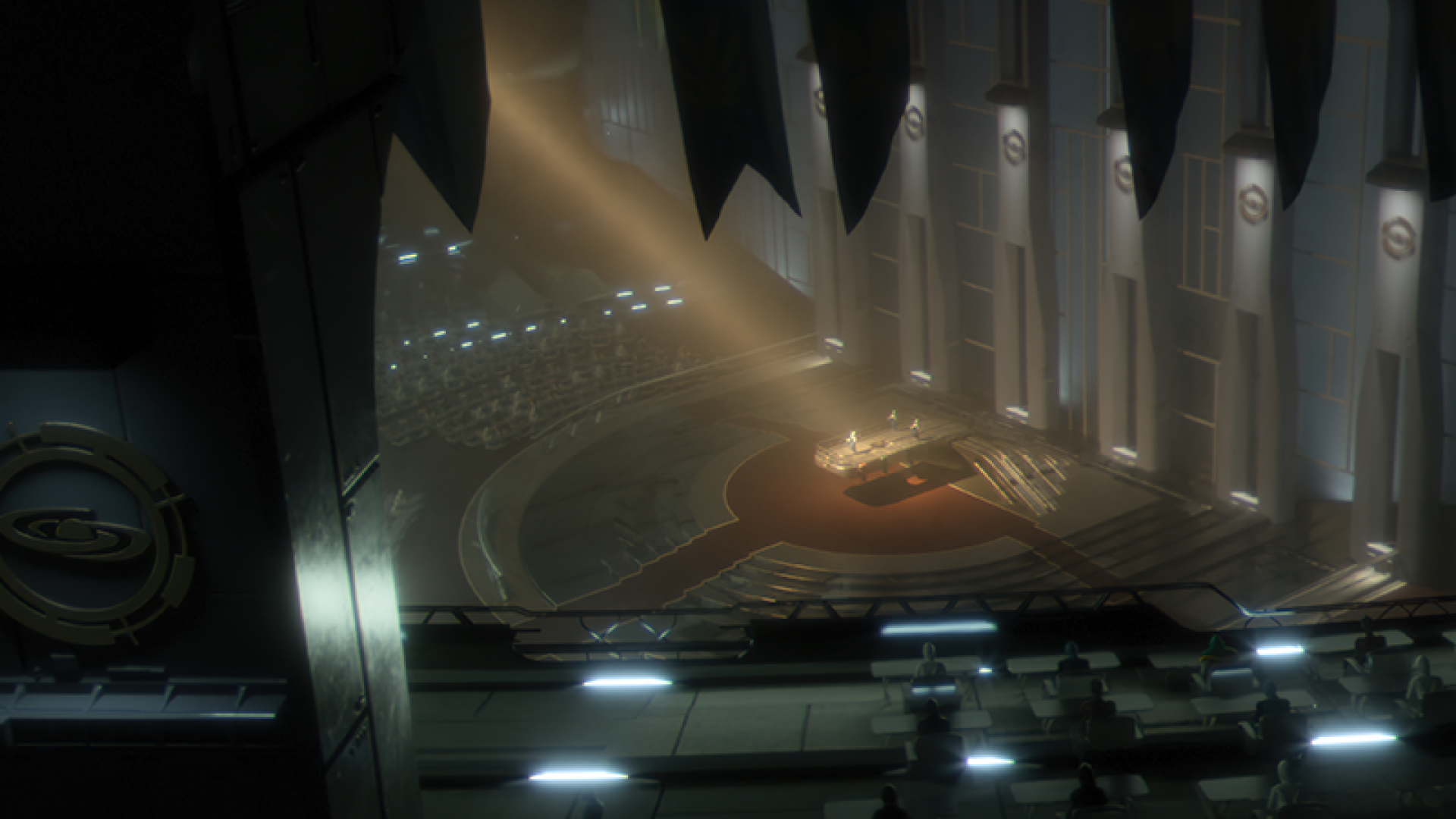 Today we’re back with another dev diary, and the topic at hand is the feature improvements coming to the Traditions system. Back in dev diary 214 when we announced the Lem Update and the Custodians Initiative, we also talked about how to make Selectable Traditions.

Attn. This post has been updated with some new changes following feedback from the community.

Selecting your Traditions
We know there’s been mods that have extended the amounts of traditions for some time now, and we also know that it's something that parts of the community have been asking for as well. For us, Traditions have always been an important part of customizing and specializing your Empire during play, and although we of course like giving players more customization options, we also need to maintain a balance. We didn’t simply want to keep adding new traditions without having the UI support it well, and we didn’t also want to give players too many options right away, which can lead to Choice Overload. We felt like it was a good time to review the Traditions system, because we wanted to add a few more Tradition Trees, and open up the avenue for doing more of that in the future, where it makes sense.

Let’s dive into the changes, and keep in mind that nothing is final and there’s missing art. Feedback is still very welcome though. 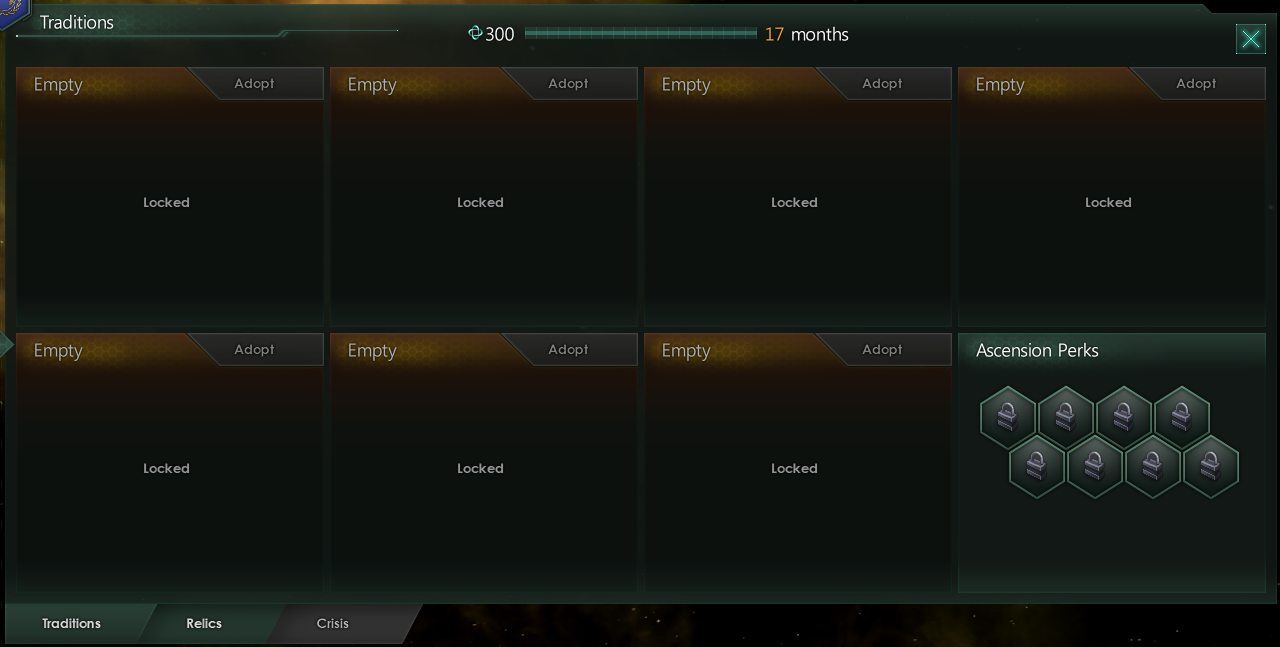 We are improving the traditions system so that you are no longer locked to the same set of 7 traditions (with some swaps), but you can rather pick which Tradition Tree you want to go into one of these 7 slots. 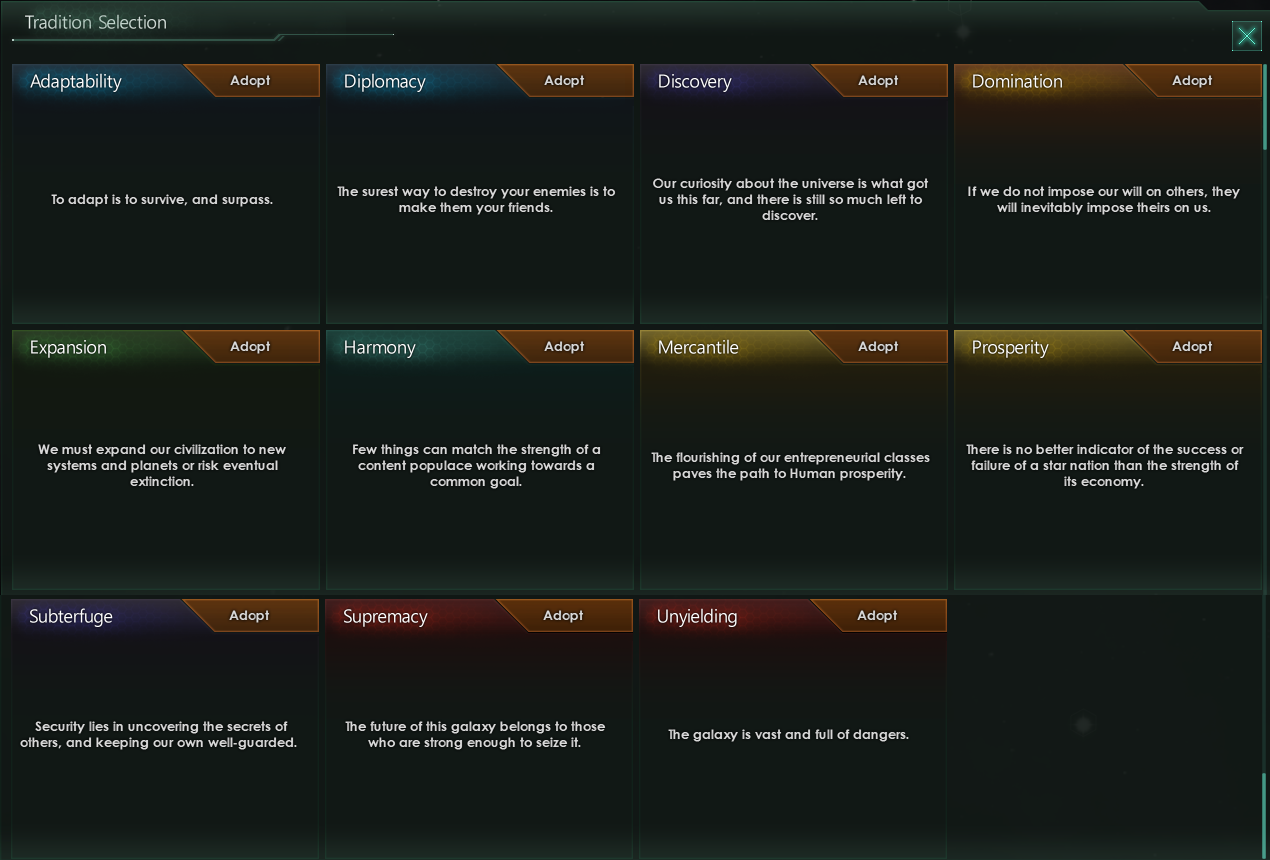 All the Tradition Trees currently available to the United Nations of Earth.​

Some of the Tradition Trees, that were previously swaps of other trees (like Adaptability being a swap of Diplomacy), are now their own trees again. This means that Adaptability, for example, is now available to all non-machine empires. Synchronicity is still mutually exclusive with Harmony (one will appear if you are a gestalt empire, the other if you are a regular one). Versatility is available to all machine empires.

Changes to existing Traditions
Other than allowing you to select your own Traditions trees, we’ve also changed some of the traditions within the existing trees. Let’s take a look at some of those changes:

New Tradition Trees
We are adding 3 new Tradition Trees to the game: Mercantile, Unyielding and Subterfuge. Subterfuge is currently unlocked by Nemesis, Unyielding is unlocked by Apocalypse, and Mercantile (originally supposed to be unlocked by Megacorp) is available to everyone. The reason being that we wanted to see how it felt to have the Trade Policies unlocked through this tree. It will therefore no longer be possible to convert Trade Value into Energy + Consumer Goods/Unity unless you have the (3) Adaptive Economic Policies tradition. 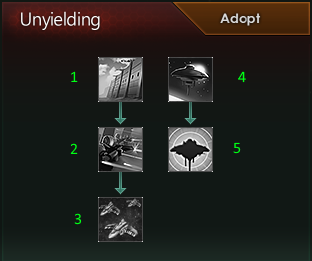 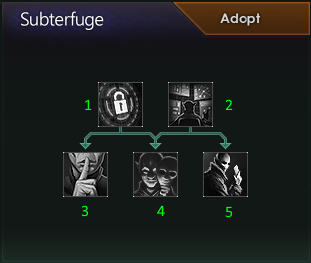 That is all for this week folks! Let us know which Tradition Trees you like to pick, and why. Any feedback is very welcome.

Next week we’ll be back to talk about the additions we’re making to the Humanoids Species Pack.
Last edited: Aug 13, 2021
Reactions:

I'm so excited for this. Every campaign feeling the same no matter what kind of empire I choose has been real sticking point. This should go a long way to alleviate some of that.

I hope more trees get added in the future, I think it's a great way to define the character of your empire in more detail as you play.
Toggle signature
The Galactic Community and the AI
Reactions:
M

Why is Unyielding limited to Nemesis if it mostly concerns starbases?

Have you considered having some traditions tied to origins? (E.g. Scions could have a tree concerning relations with FE and maybe archeology).
Toggle signature
Sit now there, and look out upon the lands where evil and despair shall come to those whom thou allied. Thou hast dared to mock me, and to question the power of France, master of the fates of Europe. Therefore with my explorers thou shalt see, and with my spies thou shalt hear; and never shall thou be released from vassalage until all is fulfilled unto its bitter end.

Me_ said:
Why is Unyielding limited to Nemesis if it mostly concerns starbases?
Click to expand...

Something in the post is wrong. The "Defense in Depth" tradition description here mentions "In addition, owners of Nemesis..."

That makes it sound like the tree itself doesn't require Nemesis but it gets enhanced if you have it.

So during the writing of the post, they may have changed it from requiring Nemesis to not, or folded that enhancement into the basic version of the tree so that it does require Nemesis.
Reactions:

Awww, I expected more tradition trees to be added. :/
Reactions:

This sounds awesome, the potential for empire variety and RP is huge, plus it could be a way to make under-utilised mechanics shine a bit by having specialised trees to buff them! Love it, excellent dev diary.
Toggle signature
Empermanual
Looking to get better at Stellaris after 1200 hours, and find some light mods. Have other Paradox games, but don't play them as often.

I've also made memes and fanart for the game!
Reactions:
M

This one seems relatively weak, as Enforcers are generally not very desirable jobs in the first place.

Also this one feels quite weak. Unity is abundant when the game is played well; this, with all due respect, feels like a bit of a "waste" of a tradition and feels far weaker than boosting trade did. I understand, of course, that you're relocating Mercantile stuff to the respect new tree, but it feels that a tradition like this is going to be picked always last unless the effect is MUCH stronger.
Reactions:
M

Another idea would be to use the traditions to flesh out some ascension perks, especially the less exciting ones. Eg. having Executive Vigor could unlock a new "Bureaucracy" tradition tree.
Toggle signature
Sit now there, and look out upon the lands where evil and despair shall come to those whom thou allied. Thou hast dared to mock me, and to question the power of France, master of the fates of Europe. Therefore with my explorers thou shalt see, and with my spies thou shalt hear; and never shall thou be released from vassalage until all is fulfilled unto its bitter end.

This seems really interesting. Will probably have to play with a bit to get a full idea of how much impact it makes, but it's definitely looking very neat. Some of those changes feel a bit odd, but I'll leave it up to people who know the game better than I do to work out if those are good or bad.

Expanded Stellaris Traditions is one of my favourite mods, so seeing more tradition stuff is exciting. Though man is it going to break that mod for a bit.
Reactions:

Me too, but this is definitely a great start. It means I don't have that dead space in my game where I'm just running through a Tradition tree I don't even want for bonuses that aren't even useful to me. At least now all the trees I select can be useful.
Toggle signature
The Galactic Community and the AI
Reactions:
F

Please consider changing 33% to either 25 or 50% bonuses. Defensive armies are really weak, so a 50% is inconsequential.
Fortress doctrine, unless taken as second or third (and there is no reason to take it as 1st) tradition is too weak as well.
Starbases as they are in, are too weak - too few weapons, too little DPS or health per equipment slot
Reactions:

I like how it's looking but there should be also a bonus for Megacoorps in Trade Tradition added same way like Nemesis one in Unyelding. Also the Finisher of Trade is really bad compared to rest. Some improvement to either clerks (like clerk output increase in both happiness and trade or f.e. lowering number of pops needed in clerk jobs while keeping same output because right now they are barely worth it early game and later it's only getting worse). Another option would be increase in trade values depending on trade route travelled distance (something like trade mechanic in EU4).
Reactions:

So Domination is even worse now. And I think subterfuge is so niche that it won't ever be picked.
Other than those seems good
Reactions:

So what you mean to say is that you've nerfed Domination into the center of the Earth?
Reactions:
M

Now, in my prior post I criticized some of the new traditions as very weak and nerfs compared to the prior ones - let's now talk about a positive!

Piracy was never really a problem if you competently used a Bastion Starbase with Hangars, so Secure Shipping always felt like a waste of a tradition. But upping Diplomatic Acceptance, especially for hard to get agreements, is easily far more useful, especially for the intended play style.
Reactions:

Me_ said:
Why is Unyielding limited to Nemesis if it mostly concerns starbases?
Click to expand...