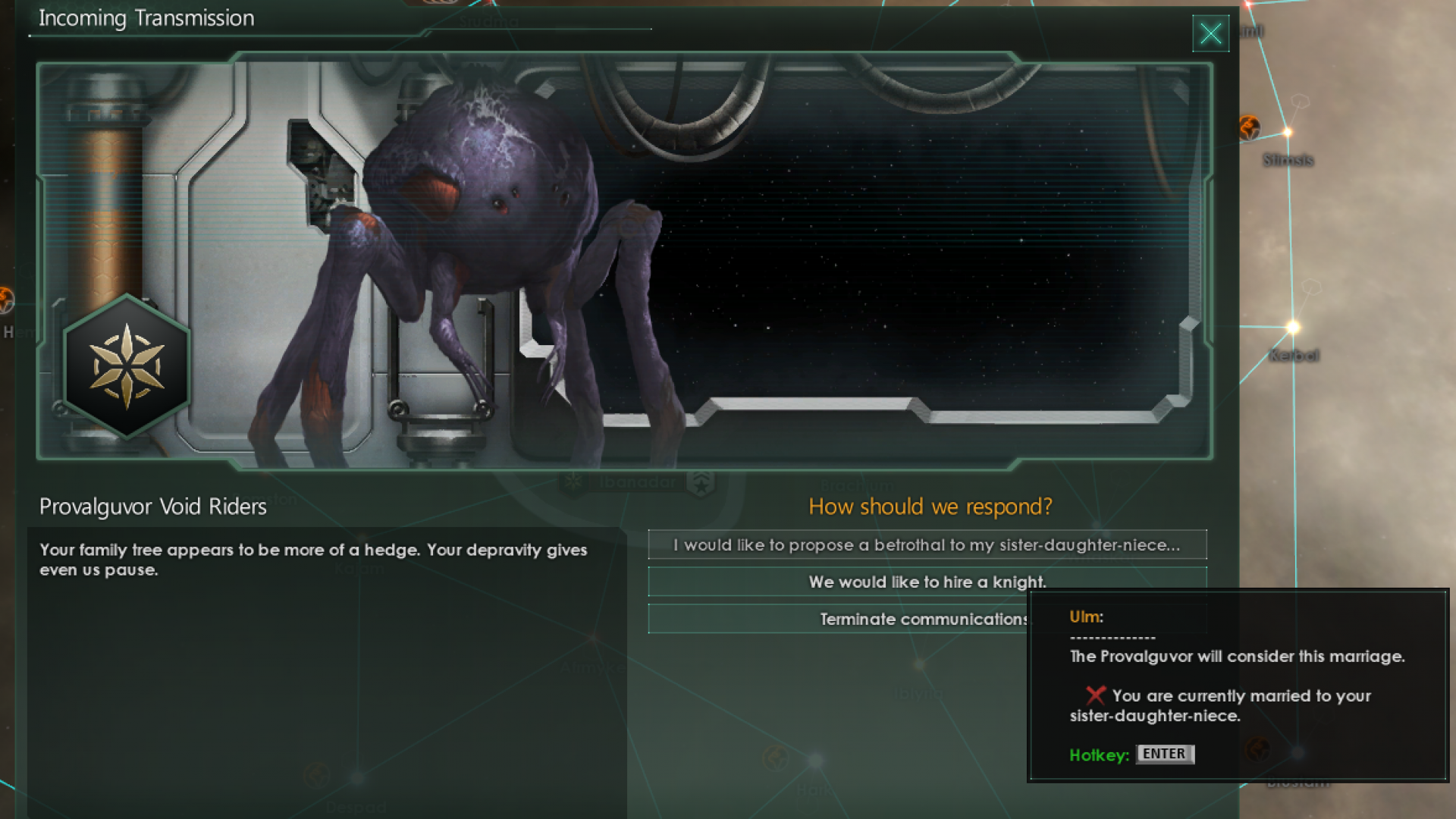 This week we want to show off some of the challenging new Origins that are not coming soon.

The first, titled Surviving the Aftermath, is a variant on Void Dwellers.

The Surviving the Aftermath origin starts with the premise that a construction ship and colony ship were lost in MIA when a Crisis nation activated the Aetherophasic Engine and destroyed the galaxy, and you're left in a habitat to pick up the pieces. 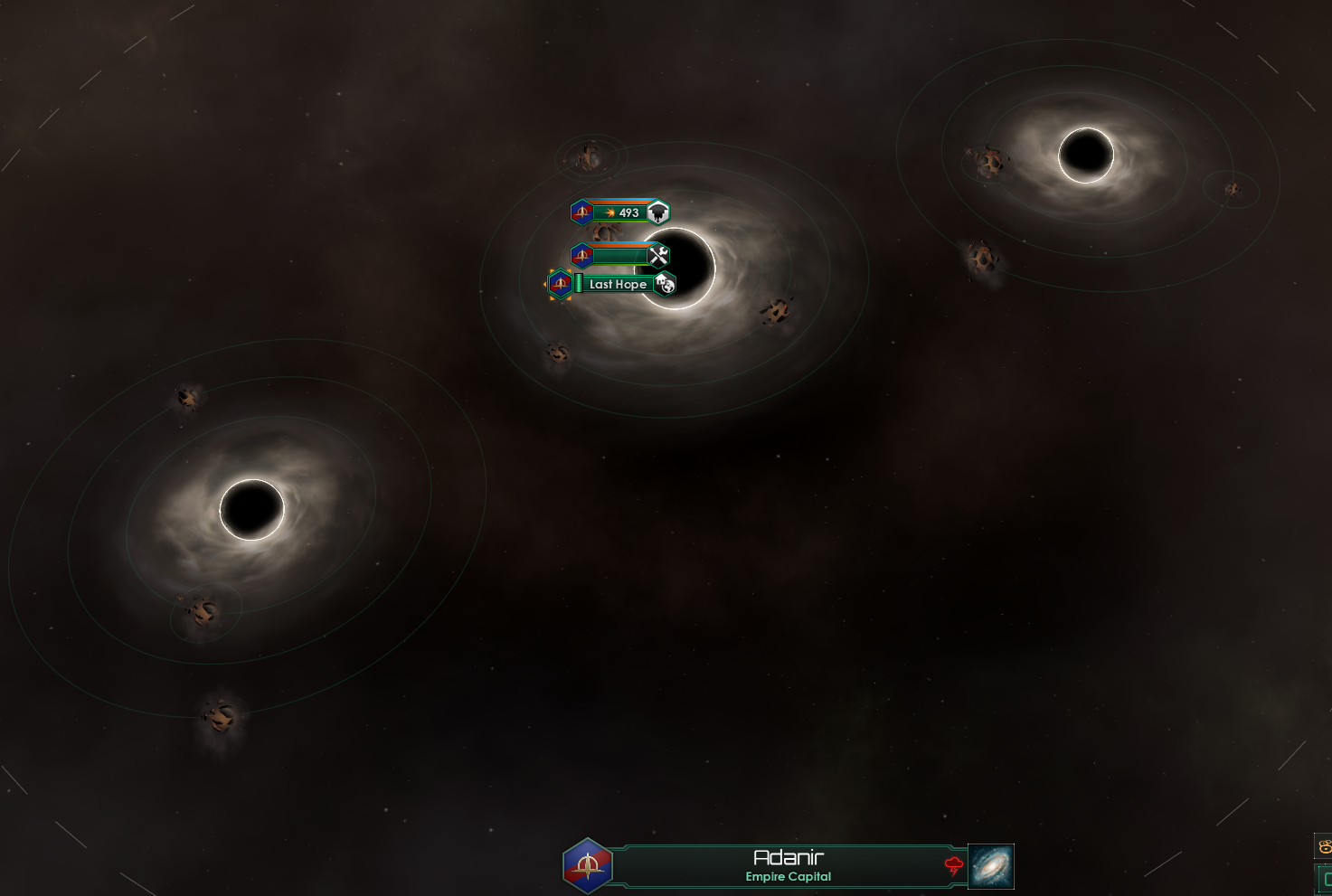 As the galaxy has been destroyed and there are no resources anywhere, we expect this to be an exciting and challenging origin to play. 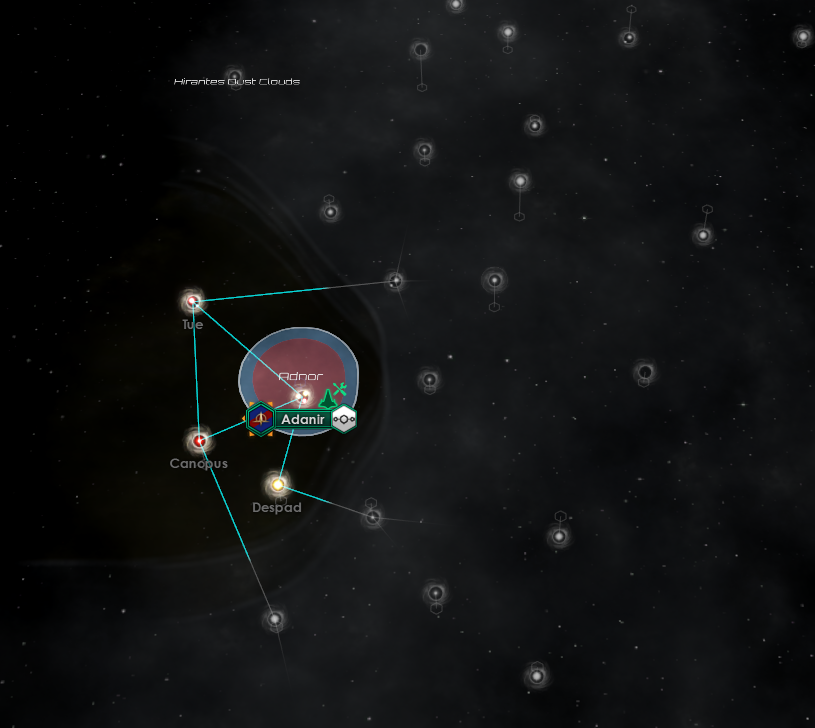 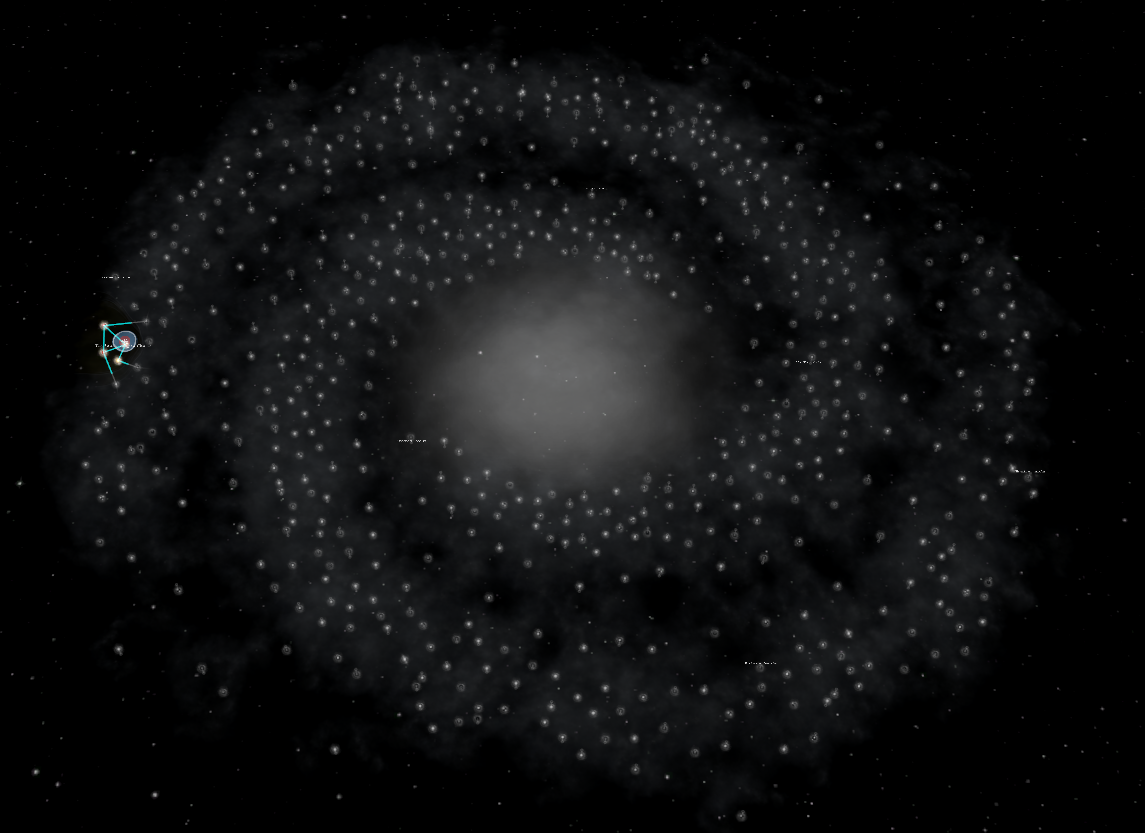 The galaxy. So alone. So very alone.

The next is the Crusader King Origin, where you begin the game as the ruler of a primitive civilization in the late medieval time period. 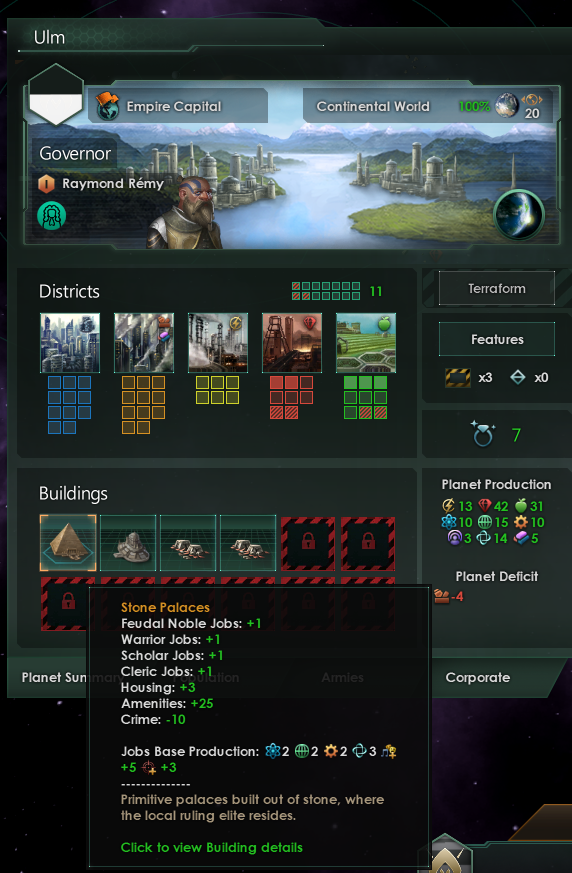 This origin starts at a significant tech disadvantage, but our playtests suggest that you should achieve spaceflight within a few hundred years.

Several events have been added in case another empire wishes to enlighten your civilization, as well as a "burn the alien at the stake" minigame. 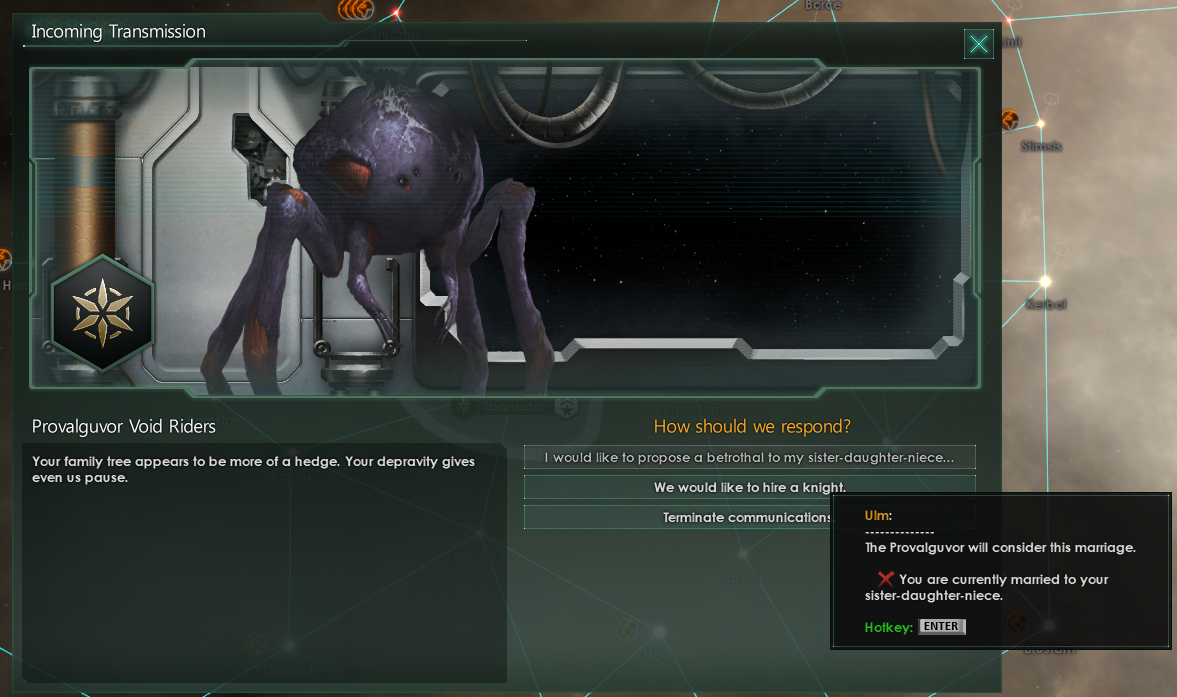 Winning the game as a Crusader King grants the new Universe Universalis achievement.

The Prison Architect Origin is restricted to Rogue Servitors only, and drastically changes their gameplay. Instead of pampering their organic charges, they seek to collect all organics and like the Criminal Syndicate, are affected by and gain bonuses for having high Crime. They also gain extra Unity for each Criminal Syndicate pop they collect. 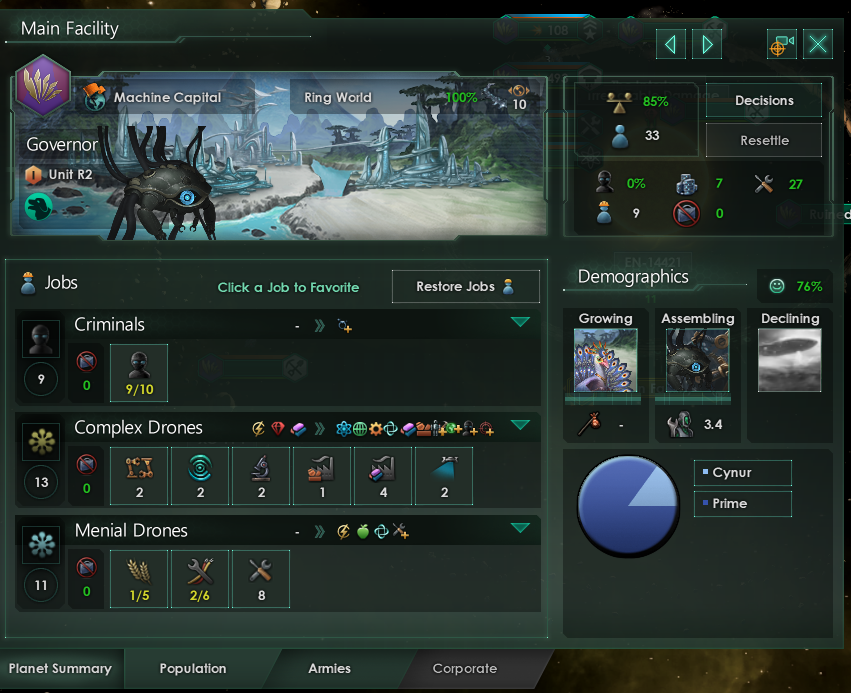 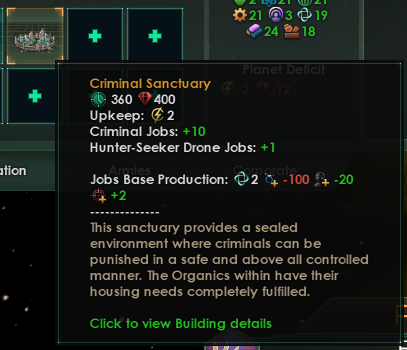 Some minor changes to the Organic Sanctuary.

Open to all empire types, the This is Fine origin has a new twist - your empire thinks it’s hot stuff and is limited to colonizing stars. 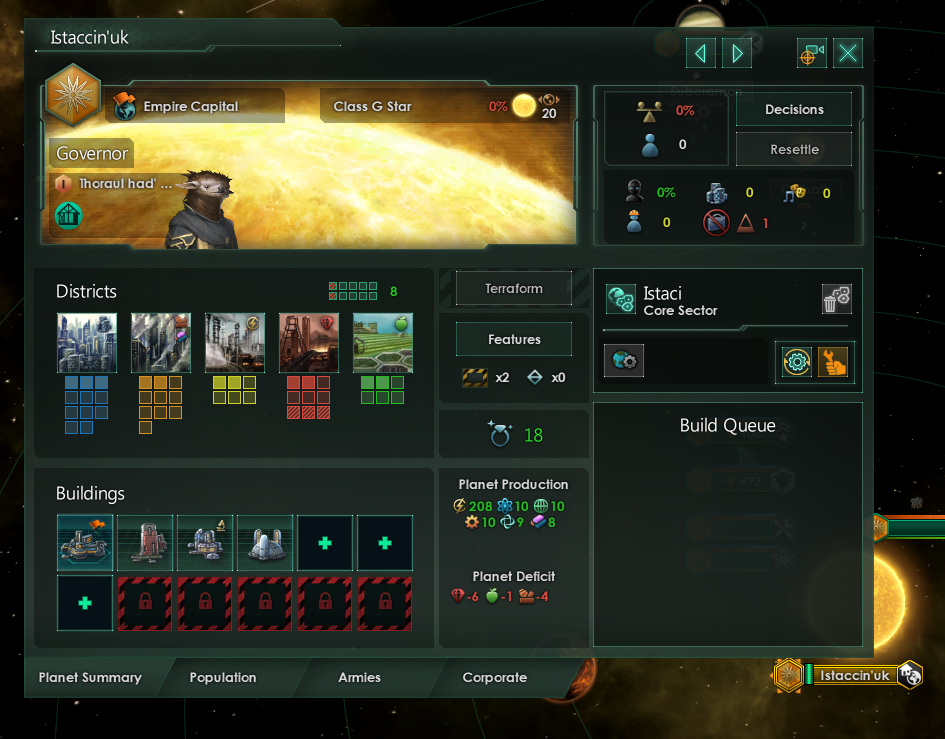 Is it warm in here, or is it just me? Looking pretty radiant though.

Your buildings have a chance of being ruined each month due to fires, but your energy production is vastly increased.

Last but not least, the AI Custodianship Origin is our most challenging yet, where you and the AI both control your empire simultaneously. This Origin is also open to all empire types, and represents a fractured leadership or gestalt intelligence where two leaders struggle for power, sometimes issuing contradictory orders. The AI Custodian will act to implement its flawless and foolproof algorithms, undoubtedly bringing your empire success in the long run, if you would only listen to it. 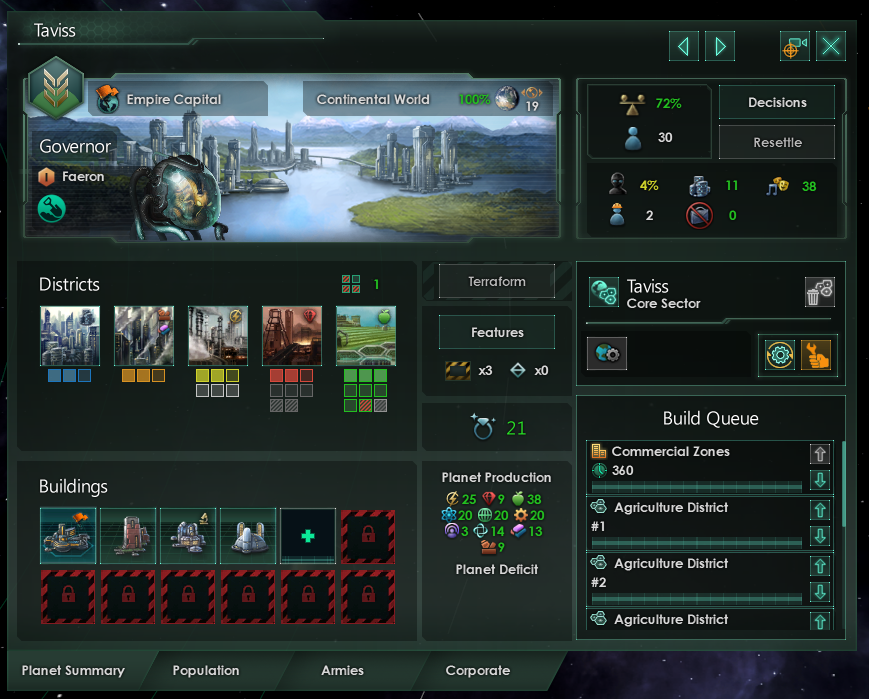 The AI has great plans for my homeworld. The greatest of plans.

That's all for this week. As a reminder, the Stellaris 3.0 'Dick' update and Nemesis arrive two weeks from today on the 15th of April.

What Origins would you create if you wanted a special challenge?
Reactions:

Aww, I was hoping for a real diary and not just a joke one. But this is pretty hilarious to be fair.
Toggle signature
The Galactic Community and the AI
Reactions:

Liggi said:
Aww, I was hoping for a real diary and not just a joke one. But this is pretty hilarious to be fair.
Click to expand...

I expect that our modding community will have all of these playable by the end of the week.
Toggle signature
The true delight is in the finding out rather than in the knowing.
I sometimes write things on Mastodon and Twitter too.​
Reactions:

not to hijack the dev diary, but could we get the option to choose a starting difficulty for scaling?
Reactions:

So there won't be any patchnotes next week, right?

Thanks for the laugh, but ... please sir, may we have some more?
Reactions:

I like April fools Especially the Crusader Kings one is nice!
Toggle signature
~Mind over Matter~

I'm not a fan of AFD nonsense, but this was really rather good
Toggle signature
Before you accuse Paradox of selling out with the design of Vicky 3, go listen to track 7 on Tool's Ænima, then reflect.
If you don't want politics in your games, play Tetris.
Ceterum censeo Featured Content banner delenda est.
Reactions:

I know what day it is, but I actually would like to see these implemented in-game.
Reactions:

Do we get patch notes next week?
Toggle signature
The Galactic Community and the AI
Reactions:
J

Eladrin said:
I expect that our modding community will have all of these playable by the end of the week.
Click to expand...

Not gonna lie, there's something weirdly intriguing about a galaxy filled with black holes and empty of life.
Toggle signature
When you reduce a family tree to a family bush, you can't hide as much underneath.

I have to admit, it took me until the "burn the alien at the stake" minigame. Still, would play.
Reactions:

I have noticed the trying to fool part of this day seems to have gone.It is like Aprils joke day in the hive mind now.
A