Jump to latest Follow Reply
Menu
Install the app
You are using an out of date browser. It may not display this or other websites correctly.
You should upgrade or use an alternative browser.
Stellaris 44951 Bug Reports 24779 Suggestions 14768 Tech Support 2414 Multiplayer 348 User Mods 4294 Stellaris AAR (After Action Reports) Console edition 1045
Showing developer posts only. Show all posts in this thread.
Show all posts

Hello, my name is Simon Gunnarsson, I'm the Art Lead and acting Art Director for Stellaris. I wanted to go through our process of developing a style for a new ship series that will be added to the game when Nemesis is released. I'll go through the steps from the initial meeting with our game director, Daniel Moregård, through the visual development (vis-dev), concept art production and finally end at 3D production, that includes animation and VFX.

For this time around, we had a player fantasy to cater to, so our mission statement became our guiding star throughout the process. We sat down with the game director that resulted in the imperial thematic direction. Which was enough for us to start doing some word associations to kick off the creative process.

The closer the top a word is, the more influence it should have in our direction. We held ourselves to these words even when we changed our visual direction in the middle of the vis-dev.

These first associations were part of the first brief we put together to the concept team. The theme invites for interpretations so it's important that we also define the initial art direction with supporting images, splitting the line between "what it is" and "what it isn't" is equally necessary.

With these things in mind, we curate an initial aesthetic that we think is worth exploring, so the concept team has some anchor to the vision. For the imperial aesthetic we wanted them to explore a bright and ornamental direction at first. We always enable our team to add their own touch to these curated directions, but also encourage them to also explore other paths.

Vis-dev
We had several people working with the vis-dev, all bringing their own unique take on the brief we gave them. This process is quite hard, closing doors on designs and actually drive the art direction forward is a difficult task, with all the viable options at hand, we have to be quite picky, and measure against the words that we came up with.

Asking questions like, is this conveying an imperial and dominant feeling, what works well with this specific design and what doesn't. These questions are crucial in driving the vis-dev forward.

Concept-art made by Alessandro Bragalini 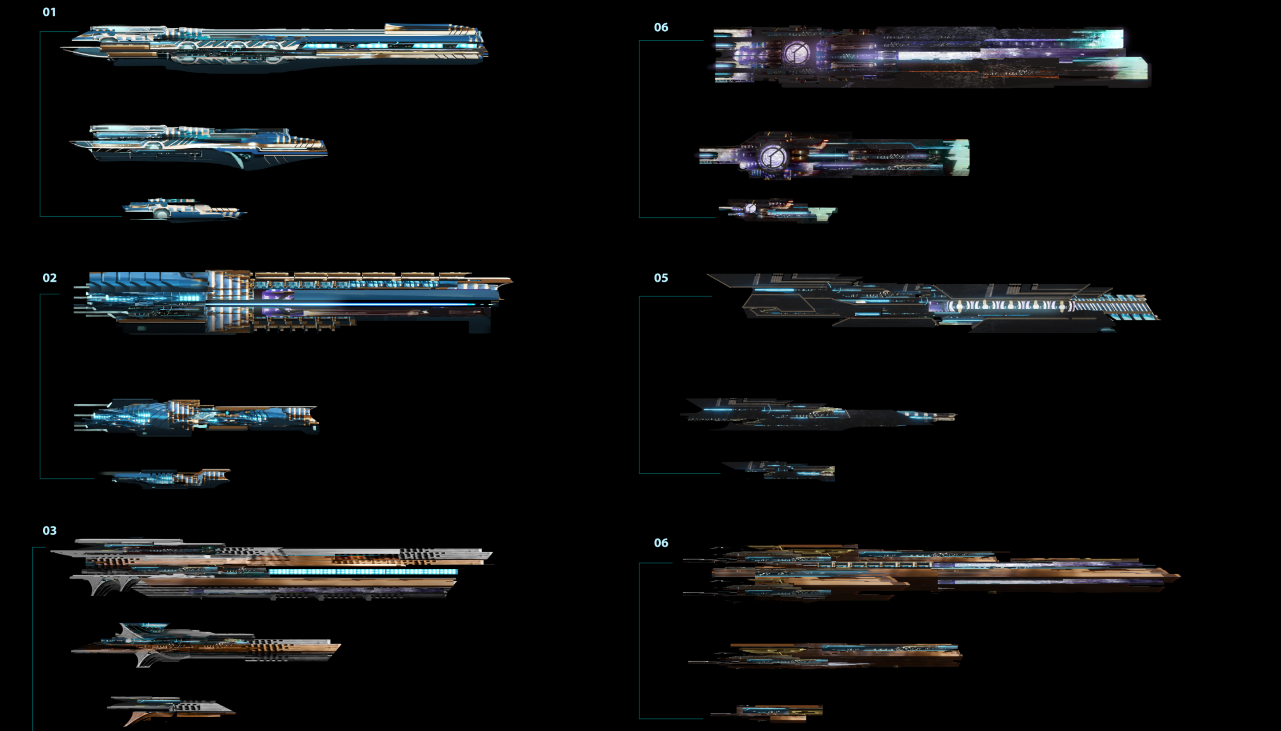 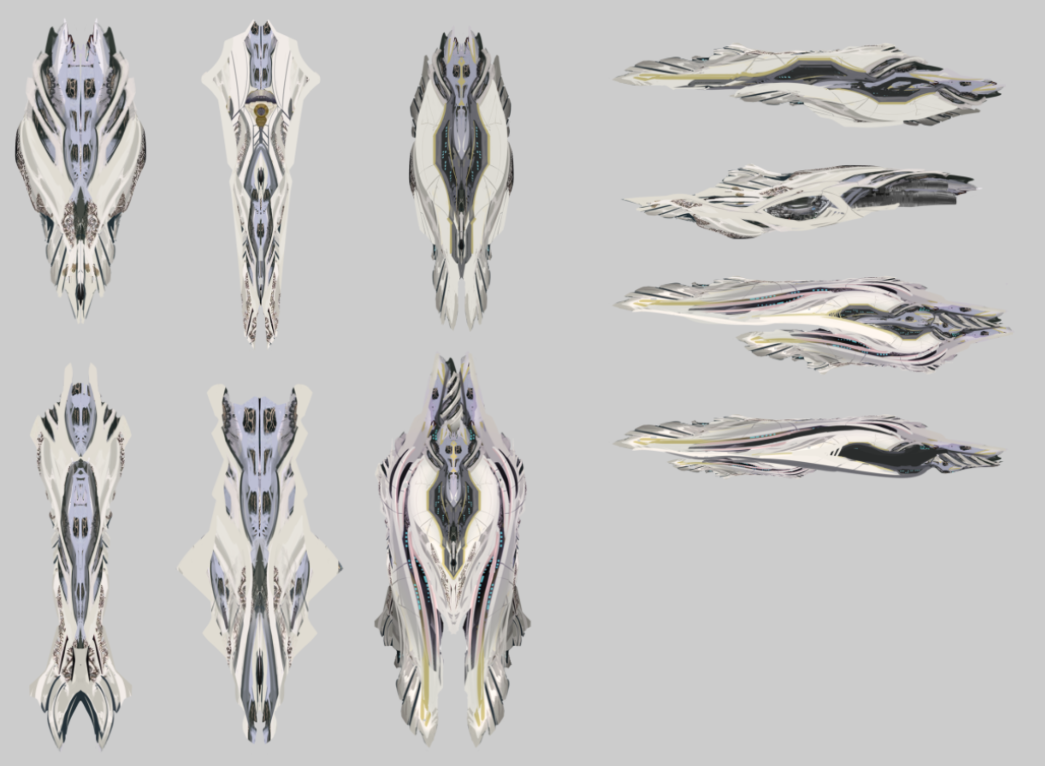 Concept-art made by Mattias Larsson

Concept-art made by Simon Gunnarsson (me!)

Concept-art made by Ylva Ljungqvist

There were concerns towards the mid-point of the vis-dev. The way the light works in Stellaris could make it so that white looks quite muddy. There's a chance that white takes too much color from the light and makes it look quite weird in some occasions.

So we iterated the curated art direction into a dark aesthetic. We made it more forgiving no matter what empire color the players chose, the ships will most likely look appealing in every instance.

The new aesthetic still had to hold true towards the associated words from the beginning. So we focused on more brutalist style, dark with silver details. 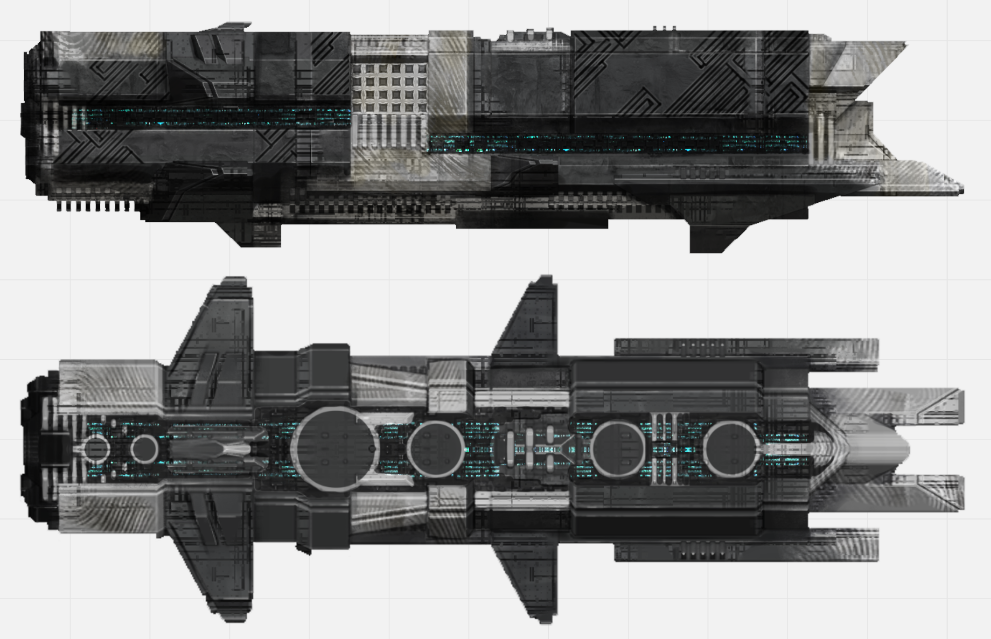 Final concept-art made by Simon Gunnarsson

Style Guide
The end of the vis-dev should result in a style guide, a document that should communicate the vision and the aesthetic, with extracted details and breakdowns. It is used by the whole team, from animators to VFX so it needs to be quite descriptive.

For example, below is a breakdown of materials that 3D artists will use as a guide to creating them. 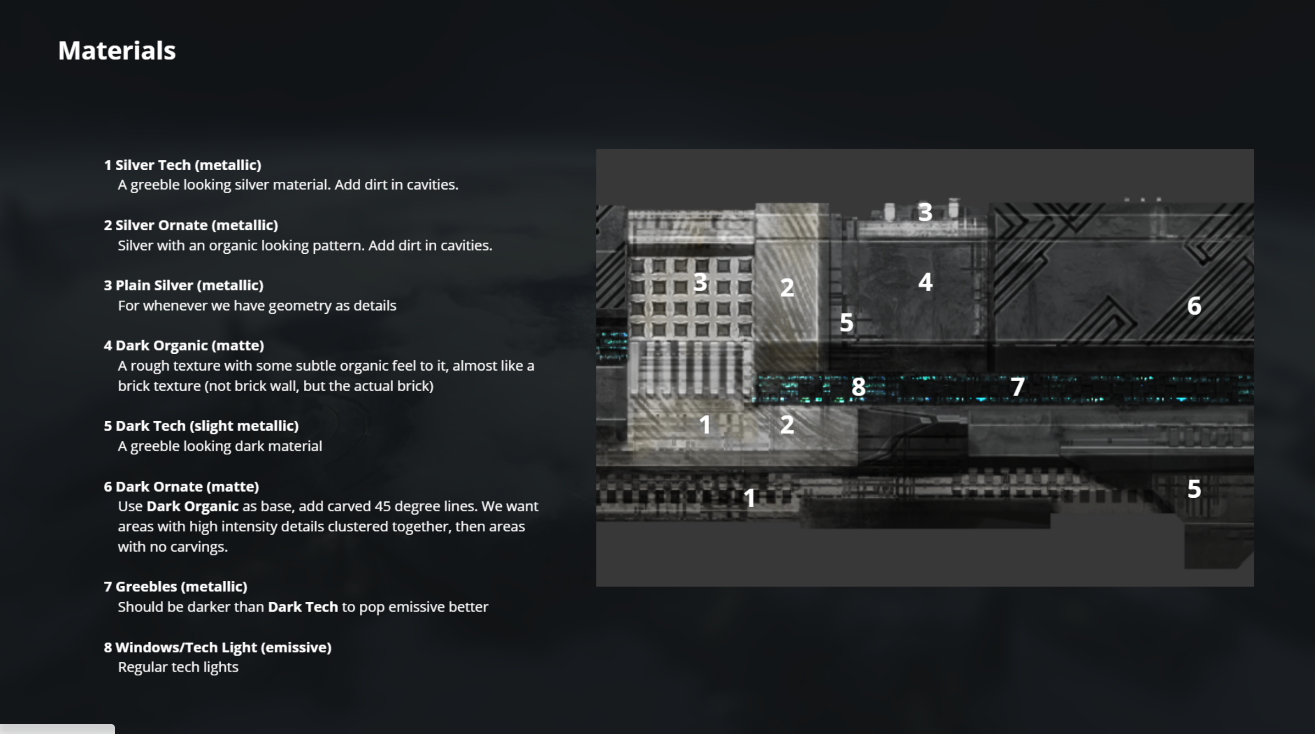 The actual concept art production is the bulk of our workload. It's where we create actual blueprints for 3D artists to follow. But it's really just a linear but iterative process to get to a final result. We start with sketching some ideas, and we slowly commit more and more to certain aspects until we have a design we like, then we refine it, add materials and ultimately a final asset sheet is created. 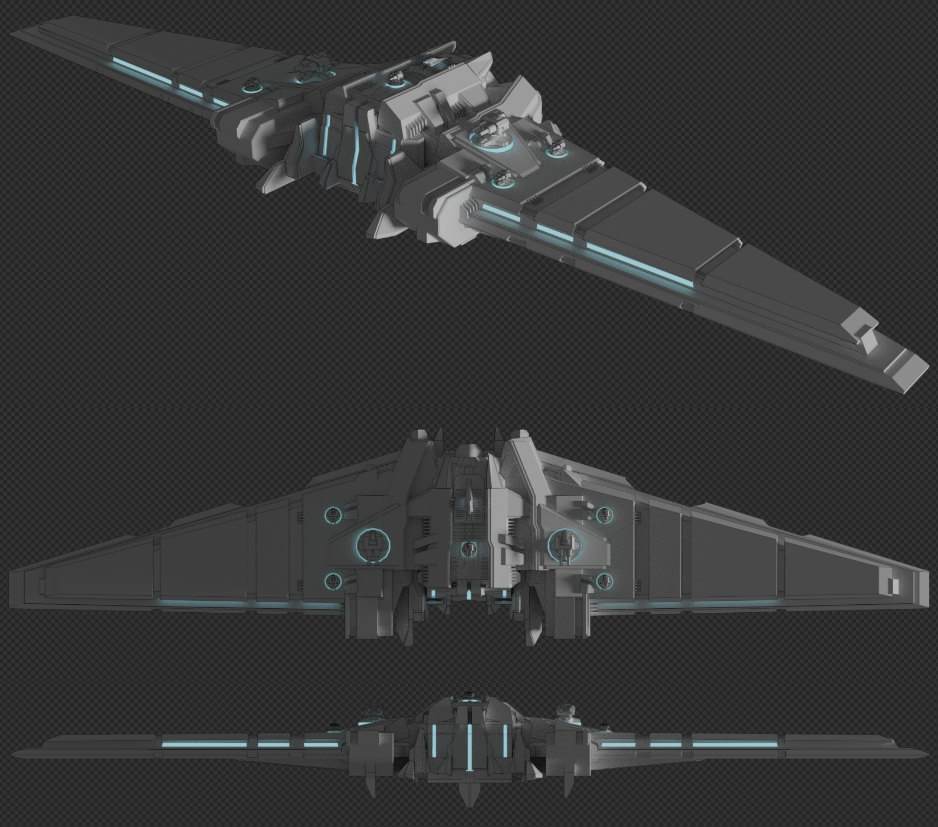 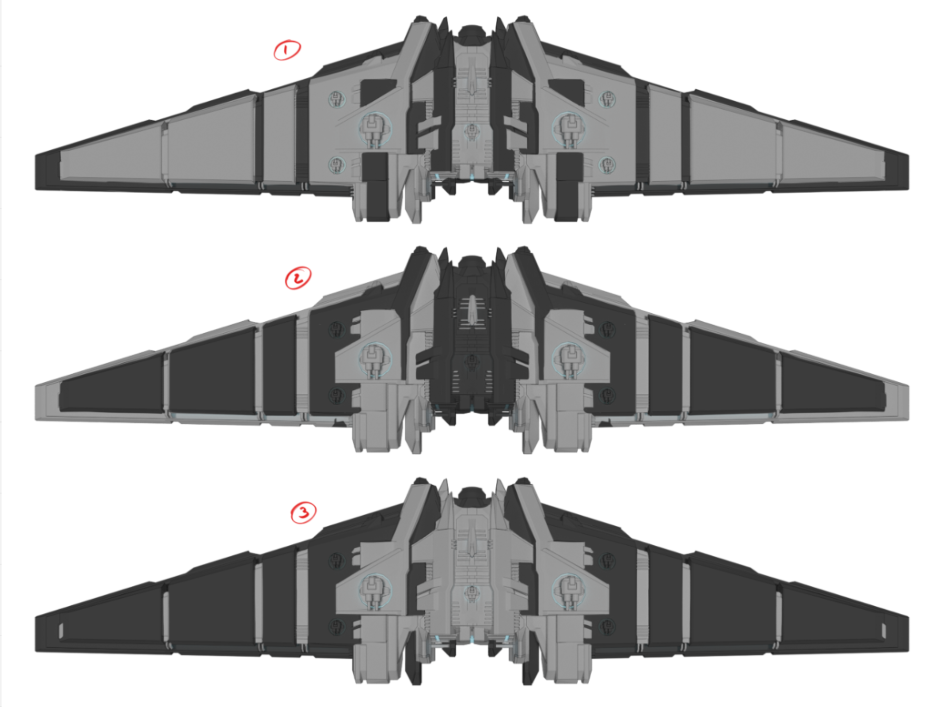 Laying down material patterns, starting with a broad design then adding secondary and tertiary level of material details 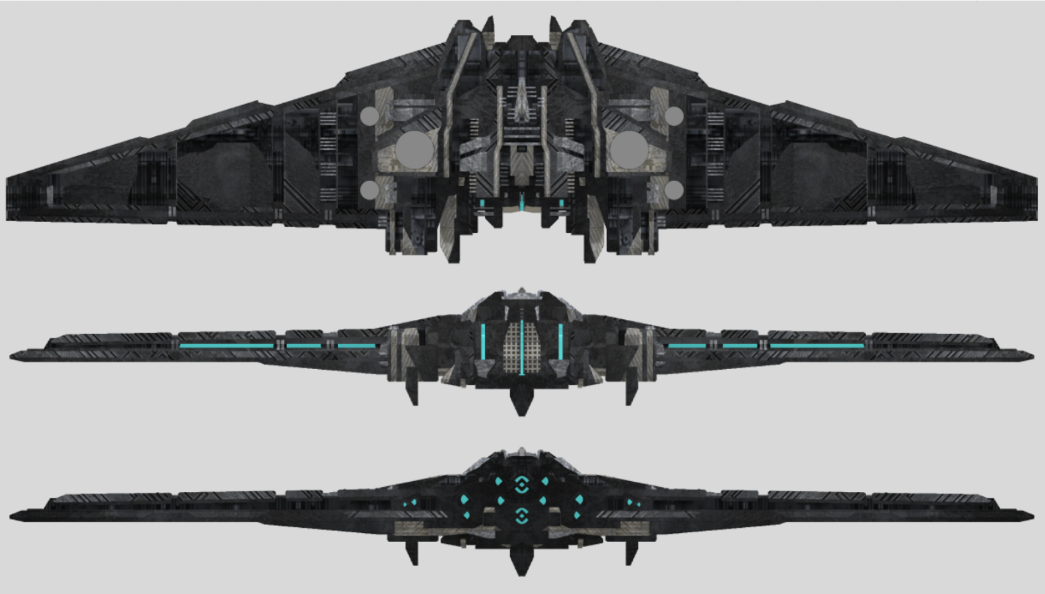 Finalized asset sheet, complete with materials and material ID for the 3D artists to follow

The end, but not quite!

This is our process with every new ship aesthetic, but the ships have a few more stops on the road before they're truly final, both animation, VFX and audio will get their hands on these before the full process is complete!

Thank you for taking the time to read this long post, here's a Nemesis (imperial style) titan! You will hear from our VFX artist, Erik Forsström, in a Dev Diary in a near future!

fodazd said:
I have a question: Who will be getting this ship set? Will it just be for the GDF or the imperial armada, or can "normal" empires also use it?
Click to expand...