Jump to latest Follow Reply
Menu
Install the app
You are using an out of date browser. It may not display this or other websites correctly.
You should upgrade or use an alternative browser.
Stellaris 48273 Bug Reports 28411 Suggestions 17554 Tech Support 2709 Multiplayer 367 User Mods 4491 Stellaris AAR (After Action Reports) Console edition 1151
Previous dev diary Next dev diary
Show only dev responses 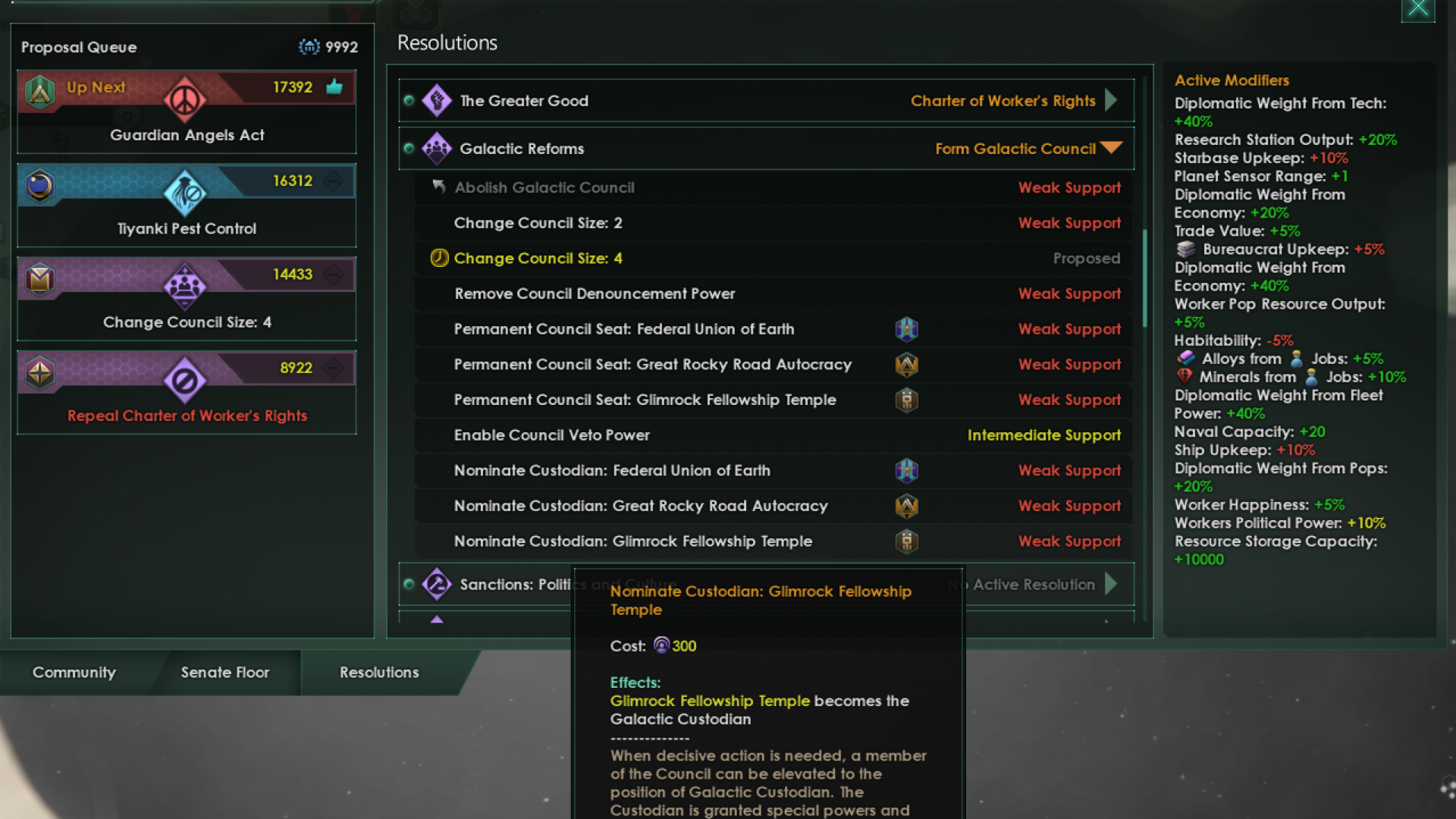 Today we’re back again with yet another dev diary; number 200 in fact. It sure has been a very exciting journey for Stellaris, and I think it is only going to get better! Nemesis is shaping up to be a very interesting addition to Stellaris, and today we thought we would talk about another headline feature for our upcoming expansion – namely the Custodian.

While some empires seek to set the universe on fire, others need to find their destiny as its defender. As we mentioned last week, the Galactic Community will get their own tools to fight the crisis, and that is what they can do by electing their chief crisis fighter.

We are setting the stage for these two nemeses to battle over the fate of the galaxy, and it is up to you who will win.

Becoming the Custodian
As soon as there is a Galactic Council, the Galactic Community can propose to elect one of the council members to become the Custodian. It is possible to have multiple proposals going at once, but as soon as a resolution is passed that elects a Custodian, others cannot be proposed anymore, as the choice has already been made. 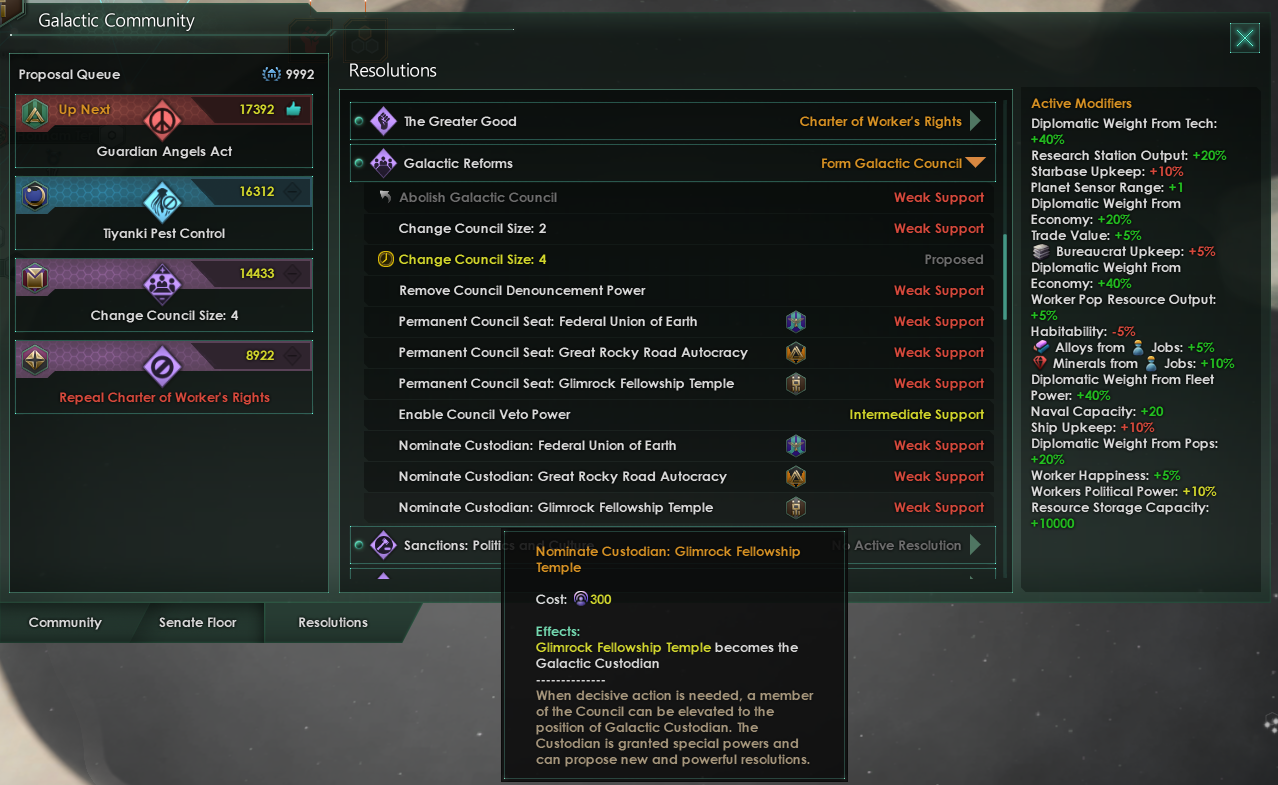 Concrete evidence that my lithoids should rock the Custodianship.​
The AI is more likely to vote for a Custodian when there is some sort of crisis going on, which can be a Marauder crisis, end-game crisis, “Become the Crisis”-crisis or any of the other things that can happen. 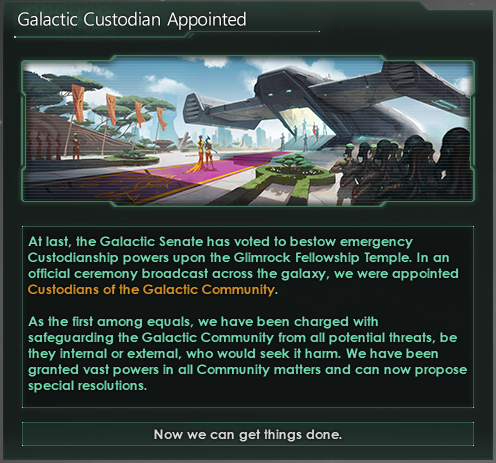 Time to get to work.​
Powers of the Custodian
In order to be effective at their role, the Custodian must gain access to some special powers. The Custodian may need to be able to affect which resolutions move to the Senate Floor, so they have extended powers to be able to influence that more directly. 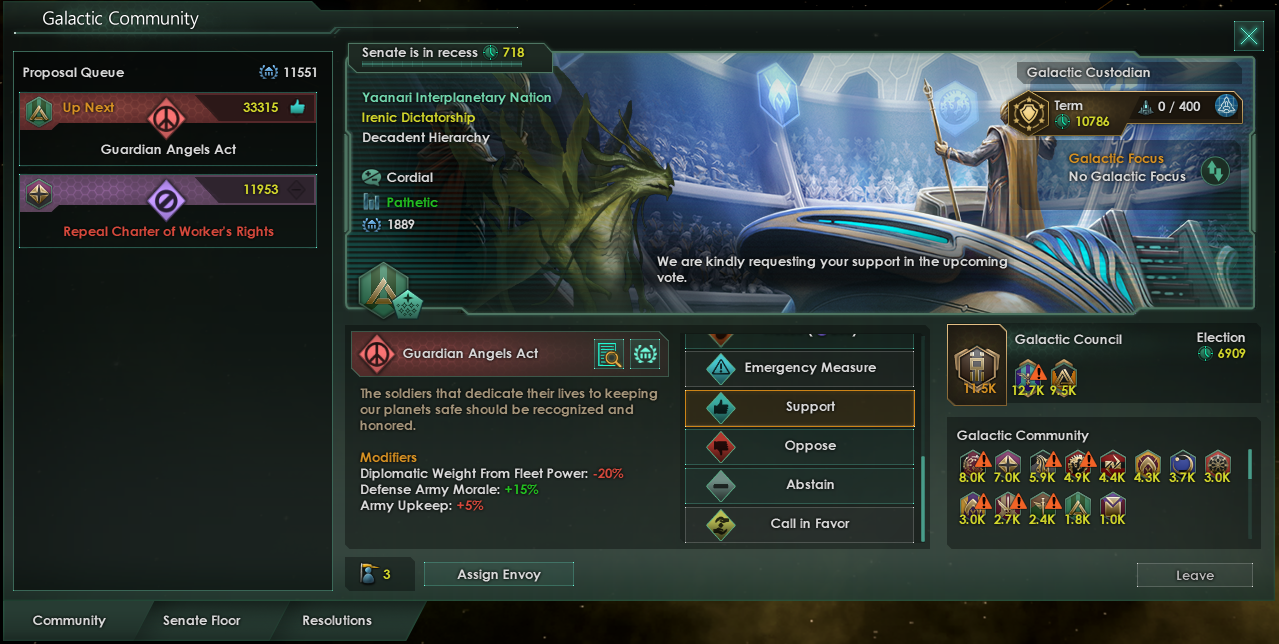 The Custodian in the Galactic Community.​
Prematurely End Session: A Custodian can end the current session after half of its voting period, which will pass or reject the resolution being voted on depending on the voting situation at the time.

Shared Intel: The Custodian will gain some Intel on all other members of the Galactic Community, such as knowing their Relative Fleet Power.

Freezing proposals: The custodian can pay 200 influence to freeze a resolution for 4 years, making it impossible for the resolution to move to the Senate Floor for the duration. 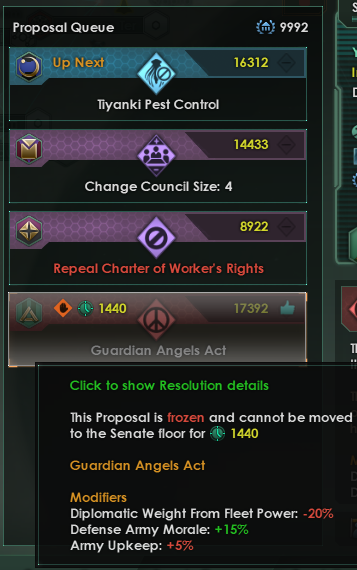 Brrrr. Will you be resolute and wait it out..?​
Custodial Resolutions
There are a number of new Resolutions that are tied to the Custodian. Let’s take a look at some of them: 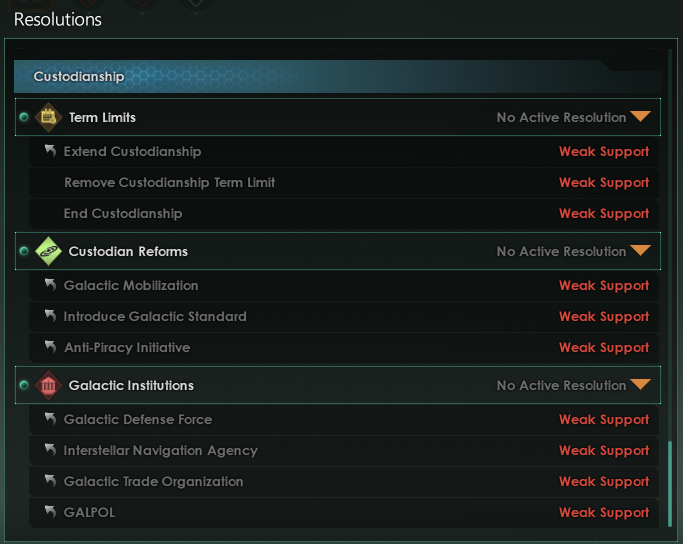 ​
Galactic Defense Force
In order to protect the galaxy from threats from within and from beyond, the Custodian is able to construct ships for a Galactic Defense Force. The GDF is very similar to a federation fleet in the way it works, with the exception that it’s under the control of the current Custodian.

Should there cease to be a Custodian, the GDF will become an independent entity until a new Custodian is established. 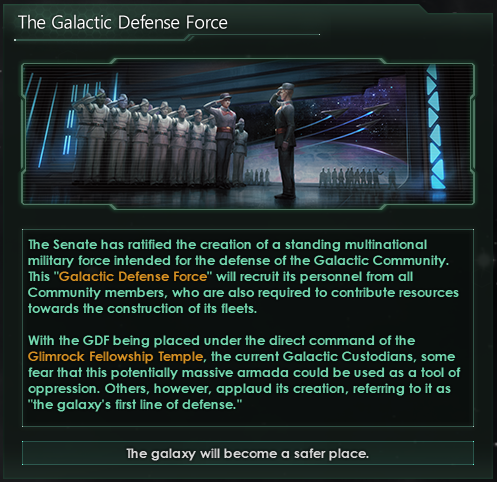 Once again, similar to federation ships, the GDF ships can be designed in the ship designer., which can be accessed from the Galactic Community UI. 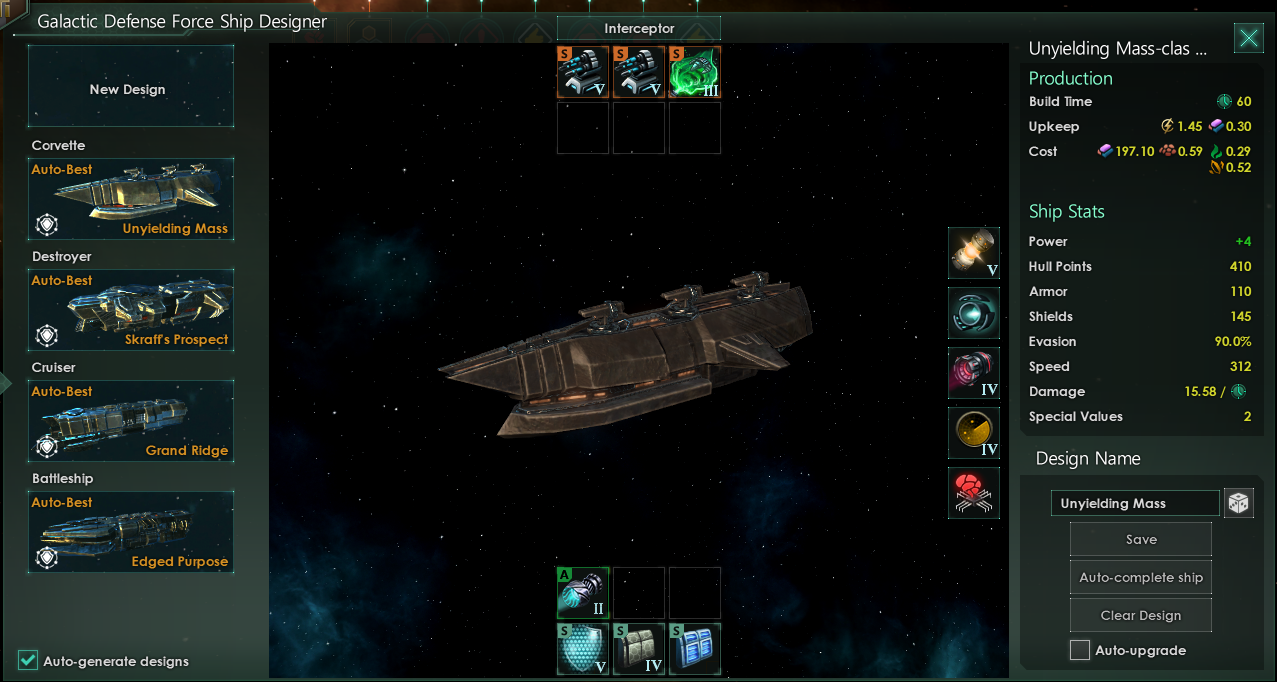 GDF? Ship just got real.​
A Galaxy on Fire
After you have gloriously hammered the crisis into obscurity, your service as a Custodian is no longer needed, and the powers that came with the responsibility could be returned.

Maybe it was a really tough fight, a war the galaxy is sure to remember, and maybe you needed to ask the Galactic Community for more powers in order to win against the crisis – powers that you may not want to give up so easily...

This very much captures what we are trying to do with Nemesis. After one crisis has been defeated, maybe the next one is just around the corner… and this time it's a diplomatic one.
Reactions:

P.S. TO all dislikers - What are you respectfully disagree with?
Last edited: Feb 12, 2021
Reactions:

Question: Does the Custodian receive any... renumeration, for their services? 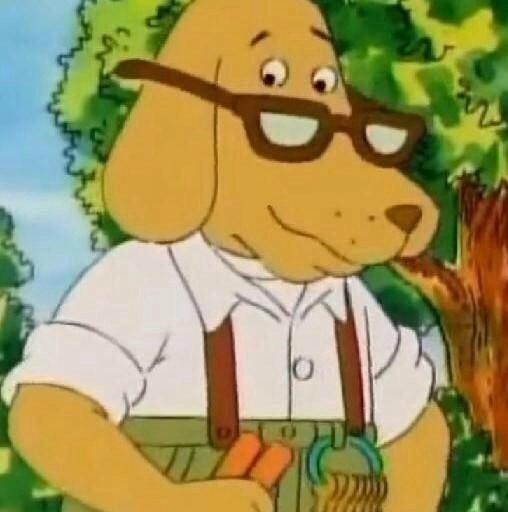 >and the powers that came with the responsibility could be returned.

PLEASE do give us the option to see-off the crisis and, once the Galaxy comes saying, "So, uh, time to give up those emergency powers now", we can turn right back round and say "Nah, you're alright mate", and keep the powers, whether the Galaxy likes it or not.
It would cue SO MAMY "I AM the Senate" jokes.
Reactions:

Ok, really cool idea of counter a crisis with senate power and rights granted to the custodian. And I have some real Palpatine vibes here 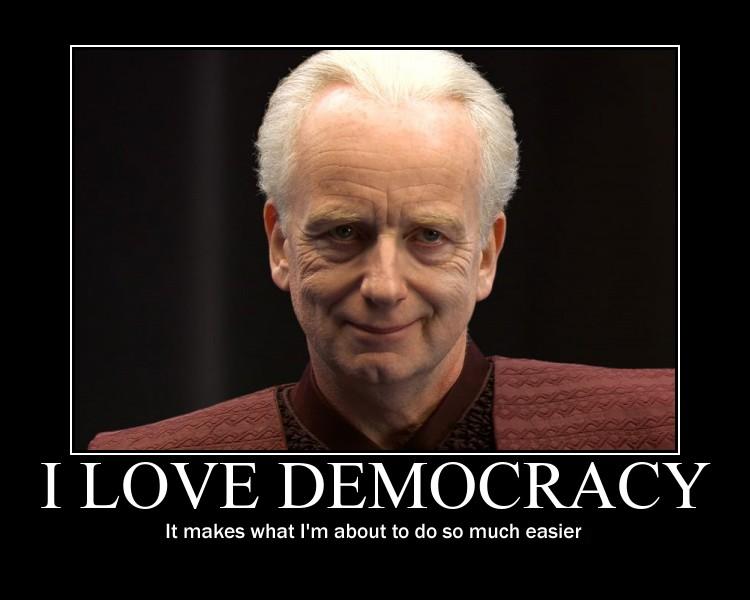 Will an AI Galactic Custodian actually be effective at fighting a Crisis? Generally, the AI do have a tendency to not be able to organise any effective response against any of the Criseses at the moment, has this been addressed at all with new AI behaviours?

Additionally... if an AI chooses to "Become the Crisis", will they actually be a threat? Will they have any unique behaviours over and above the current AI for, say, Fanatic Purifiers?
Toggle signature
The Galactic Community and the AI
Reactions:

Will the GDF have their own ship disign ?

Will the custodian have special bonus against the crisis ?

Will the Defender of the Galaxy perk be change ?
Toggle signature
Flesh is <WEAK> Metal is <ETERNAL>​
Reactions:
K

This feels like the level of power the Galactic Community should have always allowed for.

Finally, we can say "I am the Senate" and it's no mere joke.
Reactions:

I especially like how this is making use of the toolset introduced in an earlier patch, thus making the systems interact in a way that makes sense. This gives me hope that future reworked/added systems will get the same treatment!

... And yes, this is exactly what we needed to finish the "I AM the Senate" moments.

Edit: with the caveat that some of those resolutions don't seem particularly flavorful to only be available as proposals to someone who is declared the Custodian of the Galactic Community.
Last edited: Feb 11, 2021
Reactions:

All hail our space Jannies!

They do it for increased Galactic Community benefits!
Reactions:

Is there a significant chance to become custodian and gain all these privileges without any crisis being at hand?

What are the diplomatic repercussions for "clinging" to the power that comes with the custodian seat?

Did i understand correctly that a crisis being averted doesn't kick you from the throne, but empires want to vote your ass off it? (Through time limited seats)
Toggle signature
My Suggestions for Crusader Kings 3:
* Remove basic action unlocks from the perk tree, but weaken the baseline strength *
My Suggestions for Stellaris:
* Distinguish between Culture Workers and Administrators again * Planetary ascension should add "throughput" modifier * Prosperity Modifier to balance Pop Growth vs Pop Acquisition * Implementing temporary effects for "dangerous" technologies * Traditions should be swappable (at high cost) *
Reactions:

Will there be a way to exclude rogue custodian from galactic community?
Toggle signature
Per Aspera ad Astra
Reactions:
A

Is that the new shipset that I see?

Anonim97 said:
Is that the new shipset that I see?
Click to expand...

They do it for increased Galactic Community benefits!
Click to expand...

They do it for free.

By the time the crisis is defeated, I will probably have enough diplomatic weight to block any attempts to vote me off. But maybe not, let's see.
Reactions:

Anonim97 said:
Is that the new shipset that I see?

I don't think these galactic institutions require a custodian.
After all they also said the GDF persists even without a custodian.
Toggle signature
My Suggestions for Crusader Kings 3:
* Remove basic action unlocks from the perk tree, but weaken the baseline strength *
My Suggestions for Stellaris:
* Distinguish between Culture Workers and Administrators again * Planetary ascension should add "throughput" modifier * Prosperity Modifier to balance Pop Growth vs Pop Acquisition * Implementing temporary effects for "dangerous" technologies * Traditions should be swappable (at high cost) *
Reactions:

This all looks interesting, but it creates even more Influence sinks, and everything costing 200 Influence, while also having to spend Influence on all the other things, and with Influence capped at 1000, is insane.
Last edited: Feb 11, 2021
Reactions:

Lorenerd11 said:
This all looks interesting, but it creates even more Influence sinks, and everything costing 2020 Influence, while also having to spend Influence on all the other things, while being capped at 1000 Influence is insane.
Click to expand...

Yeah, i feel like influence is always scarce or ridiculously abundant.
Either you're waiting for the next tick to colonise/claim or you just accumulate for 20 years with no reasonable thing to spend it on.
Toggle signature
My Suggestions for Crusader Kings 3:
* Remove basic action unlocks from the perk tree, but weaken the baseline strength *
My Suggestions for Stellaris:
* Distinguish between Culture Workers and Administrators again * Planetary ascension should add "throughput" modifier * Prosperity Modifier to balance Pop Growth vs Pop Acquisition * Implementing temporary effects for "dangerous" technologies * Traditions should be swappable (at high cost) *
Reactions:
Show hidden low quality content
You must log in or register to reply here.
Share:
Facebook Twitter Reddit Tumblr WhatsApp Share Link
Top Bottom