Menu
Install the app
You are using an out of date browser. It may not display this or other websites correctly.
You should upgrade or use an alternative browser.
Stellaris 43299 Bug Reports 23377 Suggestions 13357 Tech Support 2213 Multiplayer 330 User Mods 4155 Stellaris AAR (After Action Reports) Console edition 962
Previous Dev Diary Next Dev Diary
Show only dev responses

For today’s dev diary, I thought I’d talk about a crucial part of Stellaris; waging wars and making peace, because as you know, not all ETs are nice... The system is different from most strategy games out there, but should be familiar to anyone who has played a Paradox Development Studio title. In fact, it is probably most reminiscent of how these things work in the Europa Universalis games.

Let’s start at the beginning. When you declare war in Stellaris, you have to state what your aims are; what the war is actually about. You simply choose from a list of possible goals, where each one is listed with a certain cost. The total cost of your picked goals cannot exceed 100. If you have a good reason to take something, the cost will be reduced. This might be the case if, for example, members of your founding species happen to live on a planet, or if it has previously been a part of your empire.

If you are a member of an alliance, the other members will need approve your list of selected goals before you can actually start the war. This is of course more likely if you are not too greedy and want to take everything yourself. That is, you will probably want to assign some goals to other alliance members to get them to approve the war. 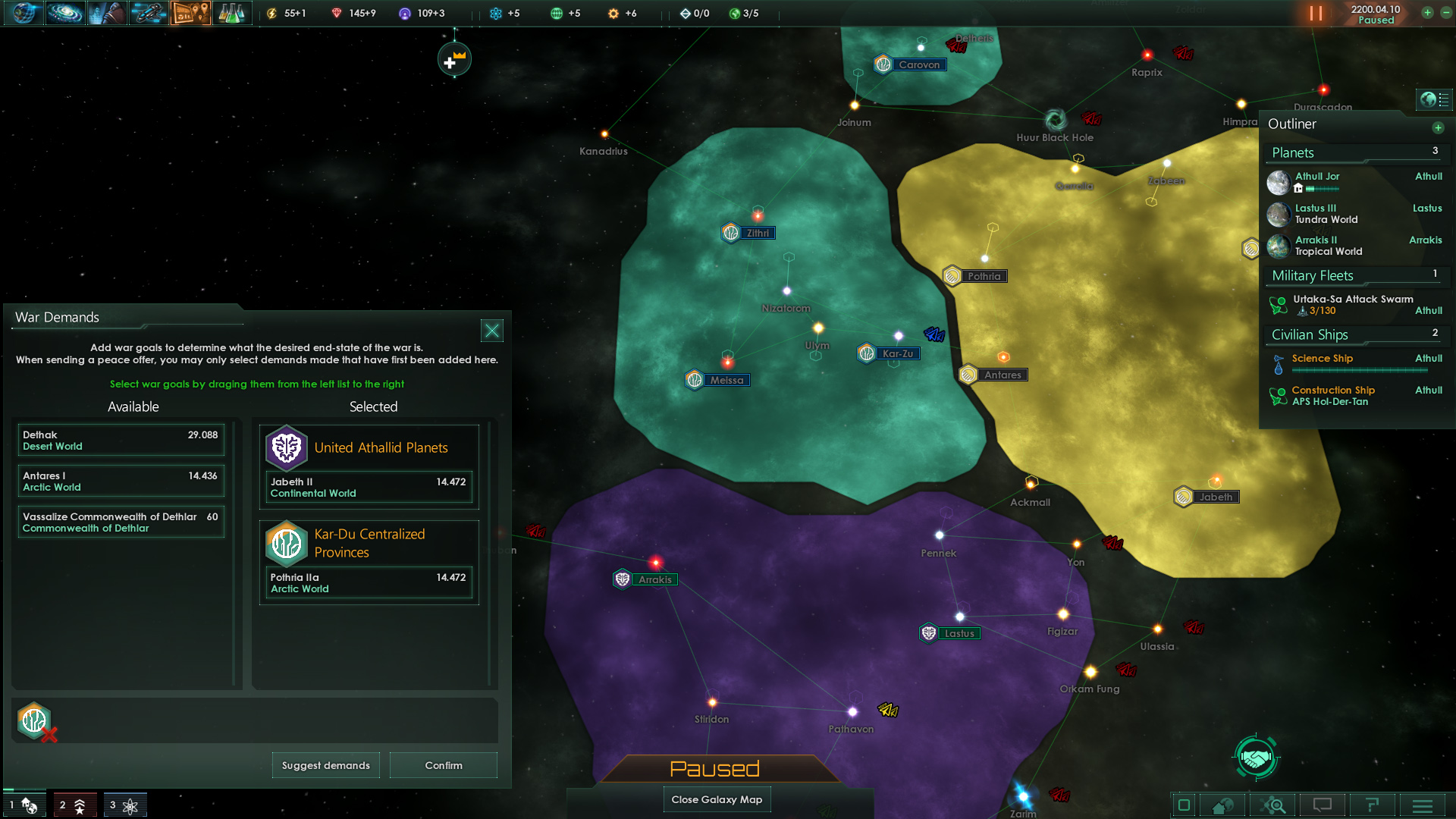 When a war has been declared, the defending side is allowed to add war goals in the same manner, but they have an important advantage; they have a one-year grace period, and can thus choose targets depending on how the war is already progressing.

You need to gain “war score” in order to win, just like in our other games (-100 to 100.) At any time, you can negotiate for peace by selecting specific goals from your own list or that of the other side, very much like in Europa Universalis (except that you are limited to the stated war goals.)

Of course, wars are not always waged simply to seize territory: Other valid goals could be vassalization, for example, or securing a treaty of some kind. Sometimes, you might not really care about your stated goals at all, but just going in there and destroying the enemy’s space ports and stations... 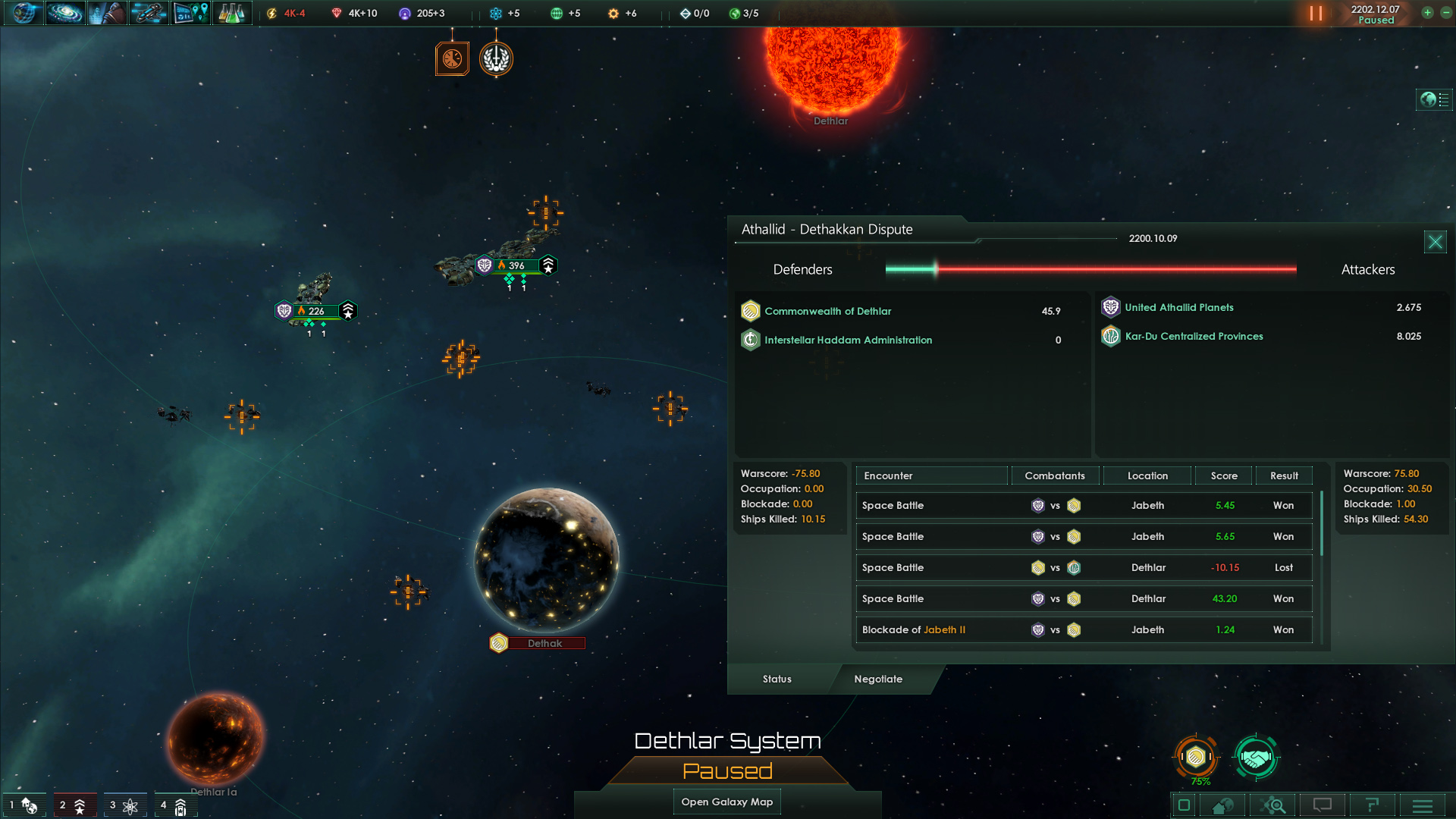 Like in most of our games, occupying a planet with your armies does not mean it immediately becomes yours, of course; you need to demand it in the peace talks. There is a notable exception to this rule though; so called “first contact wars”. Before you have established communications with another civilization, it is possible to simply attack them and even take one of their planets (but once you take a planet, communications are immediately established.) Of course, such early hostility will never be forgotten, and will sour your relations for the rest of the game… There are other exceptions to how wars are waged, in the form of special types of civilizations, but that will have to wait for another dev diary.

That’s all for this week folks, stay tuned next week for “Administrative Sectors”!
Last edited by a moderator: Feb 15, 2016
Reactions:

Are these ships in the same fleet?

What is the meaning of the green symbols?
Reactions:

Will be some some kind of neutral zone, like romunlan-federation neutral zone?
Reactions:

Milten said:
Getting your allies into war seems better than in EU, but
"Before you have established communications with another civilization, it is possible to simply attack them and even take one of their planets (but once you take a planet, communications are immediately established.)"
Why? What if I'm ultra-xenophobe?
- You captured our...
- Shh!
- But...
- Bad alien! No talking.
Click to expand...

Its probably balancing so you can't just steal all the planets a small race has also declaring war will probably end up being pretty easy for ultra xenophobes.
Toggle signature
Godzilla did nothing wrong - Brobman22
Reactions:

Are these ships in the same fleet?

What is the meaning of the green symbols?
Click to expand...

Kind of an unrelated question: Will there be a demo of Stellaris? I must admit, screenshots are nice and dandy, but i like to get my hands-on experience.
Toggle signature
-> "That should have probably been "it has no internal team member that isnt busy with other projects championing ideas for development". Both me and Wiz love Victoria for example but are fiendishly busy with other stuff. Don't worry there is a secret word document with design several people have been adding stuff to even since HoD was half-way done. We'll get around to a Vicky eventually." - Podcat

Kalnaar5 said:
View attachment 157729
What is the meaning of the green symbols?
Click to expand...

4 pips - battleship, 3 pips - cruiser, 2 pips - destroyer, 1 pip - frigate or corvette (I forget which terms they use). So it tells you the composition of the fleet.
Toggle signature
When you're crowded out by freedom's price and you take a shred of bad advice, the system knows but you're kept underground
When you can't afford a flight to Mars, when you were never born to touch the stars, the endless maze of concrete wears you down
Can you theorize our better lives where the grass is green on the other side? We'd compromise and find a way to thrive
If you're scared of being left behind, then you'd be so disturbed with dreams like mine, the realization that our world's alive
Reactions:

Mr. Sometimes said:
It's seems a lot more like the war system from Vicky 2, except you can't add war goals in progress. Still, love it!
Click to expand...

"Vicky 2 in space" might be a good way to sum up Stellaris so far.
Reactions:

can you take slaves in a peace deal
Reactions:

It's looking good but those sharp borders make my eyes bleed. Please make them curvy!
Reactions:

Doomdark said:
If your policies allow full orbital bombardment, it is possible to severely damage planets, but not to completely depopulate them.
Click to expand...

but can we destroy them?

Can I destroy planets?
Reactions:

If I understand correctly.. The wars here are seem more limited than in EU4.. You can't declare for one thing and then take another, which seems like a shame if circumstances change wildly in the years of conflict or to war goes unexpectedly well!
Reactions:

imperium3 said:
"Vicky 2 in space" might be a good way to sum up Stellaris so far.
Click to expand...

Considering they're trying to make the learning curve less intimidating than eu4? I'd say not really?
Toggle signature
'' Why do so many people here act like the Sub model is supposed to be used by the majority of players?
It isn't. It's meant for those who play the game rarely but want all the features in it when they do find time to play. they play it for a few months, then cancel it, and restart it a year or two later. Those who buy the DLCs regularly have no reason to care about it, and that's how it's meant to be. .. '' - Nyrael
Reactions:

How about regime change objectives? And forcing the target to allow peacekeeper forces to be present in order to quell any loyalist rebellions after a regime change?

Especially with the differing politics and ethos I want to be able to force freedom on all my neighbors or shoot them if they refuse to be free!
Reactions:

Sounds nice but would like to be able to add wargoals as the attacker if I didn't start with 100 selected.
Reactions:

Since the wargoals can be individual worlds, can we assume it is indeed possible for different empires to hold planets in the same system?

In the warscore portion of the screen - 'Ships Killed' seems are rather odd phrase. Can it be changed to read ' Ships Destroyed'?
Toggle signature
'Gentlemen, we're in the stickiest situation since Sticky the stick-insect got stuck on a sticky bun' - Capt. E. Blackadder.

The Empire needs YOU.. Come and post something nice about my AAR. The House of Habsburg. Victoria Revolutions VIPR01. Winner of the WritAAR of the Week Award 13 January 2008.
Reactions:

The first contact war idea is quite cool. I am not sure I have hear of it in any other 4x game. Also, I am thrilled that traits will affect your options in warfare like planet bombing.
Reactions:

Doomdark said:
You need to gain “war score” in order to win, just like in our other games (-100 to 100.) At any time, you can negotiate for peace by selecting specific goals from your own list or that of the other side, very much like in Europa Universalis (except that you are limited to the stated war goals.)
Click to expand...

Is it possible to select goals from both the attacker's and defender's lists in one peace offer, as a sort of grand bargain / territory swap, or is it restricted to either/or?
Reactions:

Also, if we have two wargoals, but during the war we decide we really want only one of them, is it possible to take only one? Or do we just choose between a Surrender demand and take all the stated wargoals or a White Peace?​
Last edited: Feb 8, 2016
Toggle signature
Ancient Greek Name List for Stellaris