Jump to latest Follow Reply
Menu
Install the app
You are using an out of date browser. It may not display this or other websites correctly.
You should upgrade or use an alternative browser.
Stellaris 47226 Bug Reports 27286 Suggestions 16692 Tech Support 2617 Multiplayer 359 User Mods 4438 Stellaris AAR (After Action Reports) Console edition 1134
Previous dev diary Next dev diary
Show only dev responses 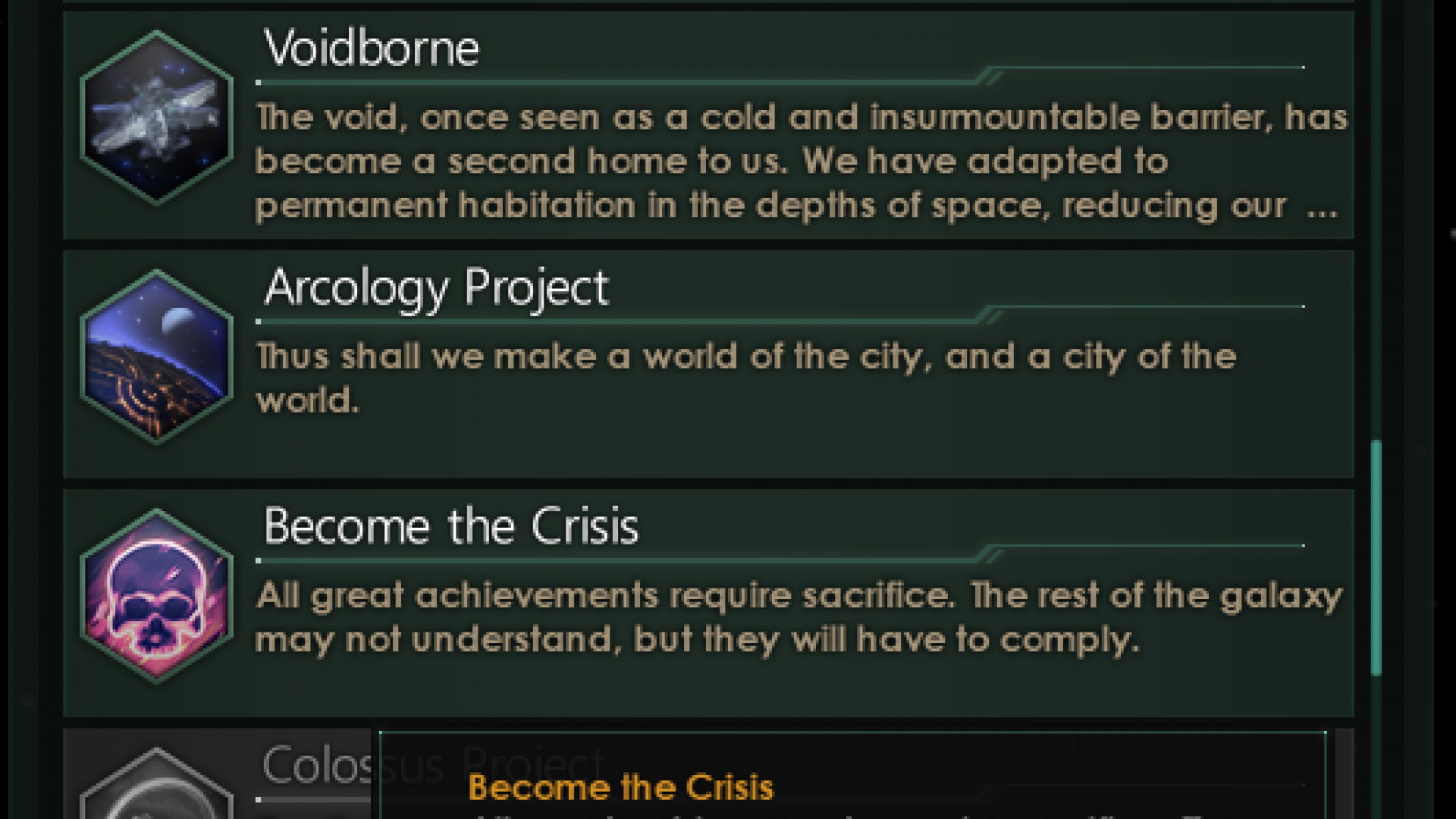 Today we’re back with another exciting dev diary to talk about a new feature in the upcoming Nemesis expansion for Stellaris.

For far too long has the galaxy remained safe from player hands. In fact, more often than not, the player has needed to be the defender of said galaxy. No more! Finally has your time come to become the crisis!

​
Becoming the Crisis
Your first step towards becoming the biggest threat to the continued existence of the galaxy is to pick the associated ascension perk. You need to have 2 other Ascension Perks unlocked before you can select Become the Crisis. The Ascension Perk is available to most types of empires, but xenophiles, pacifists and rogue servitors are unable to have the color purple as their favorite.

There is no limit to the number of players that can pick it, but the AI will be less likely to do so if there is another empire that already has it. 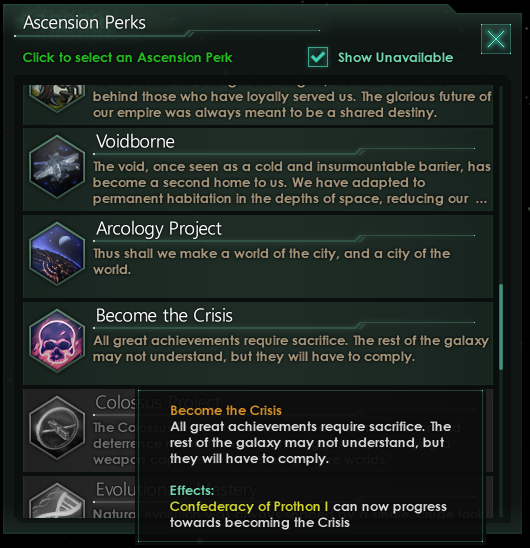 Donning the purple, the Stellaris way.​
Upon picking the Ascension Perk, your path of destruction has begun. You will forfeit other opportunities to focus on your newfound goals.

Becoming more menacing
As soon as you have chosen to Become the Crisis, you get access to a new UI tab where you can see your current crisis perks, and menace objectives. 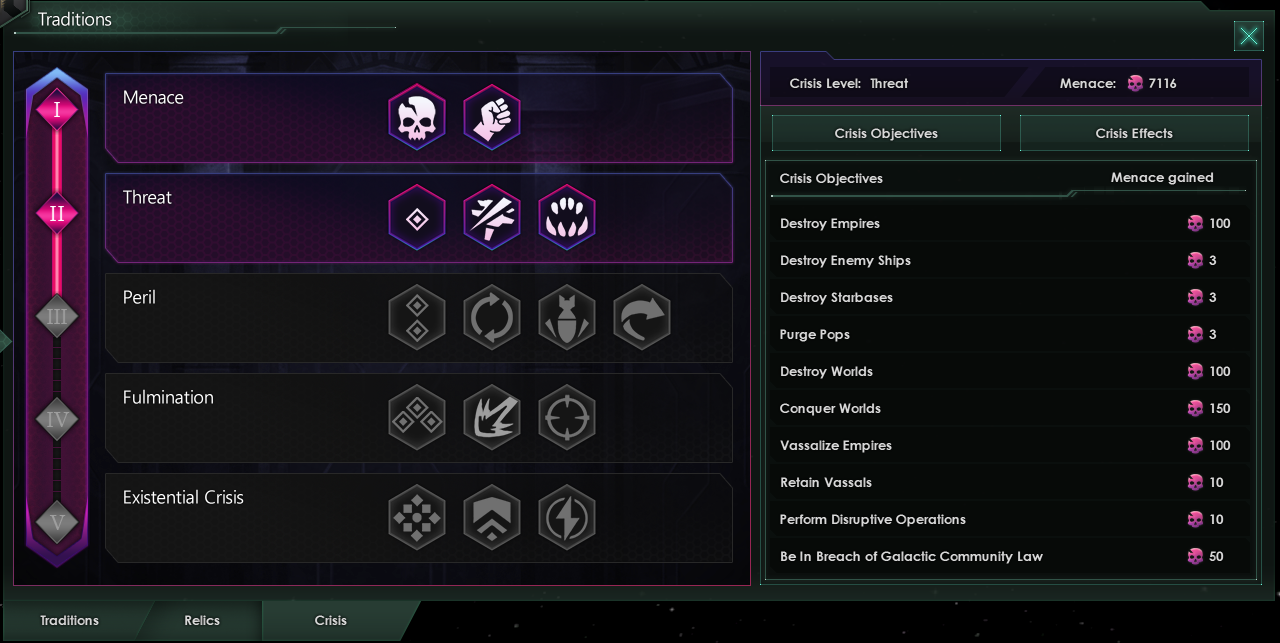 Work in progress. Names or descriptions may not be final.​
As you perform certain evil deeds, you’ll be rewarded with Menace. Some of these are rewarded upon reaching an objective, while others are rewarded over time while certain conditions are met (such as having a vassal). 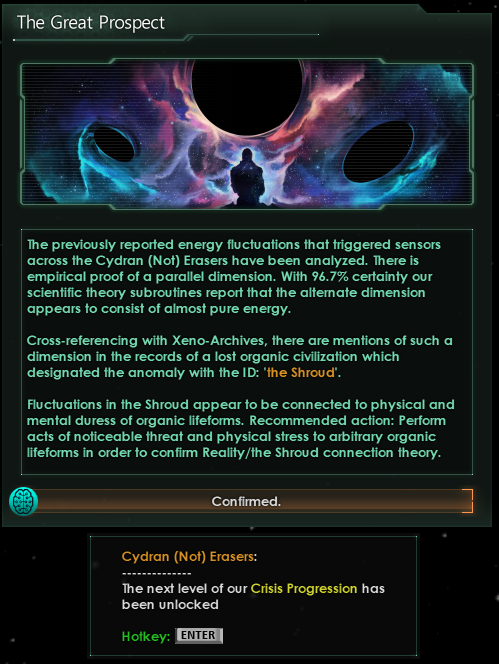 Finishing the 1st special project, which takes you to Crisis Level 2.​
Crisis Perks
Each Crisis Level unlocks certain Crisis Perks, which can unlock bonuses or new types of ships. As you become more menacing, you’ll also become more powerful through these perks. 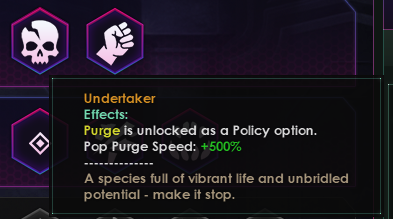 A crisis needs to keep its options open. 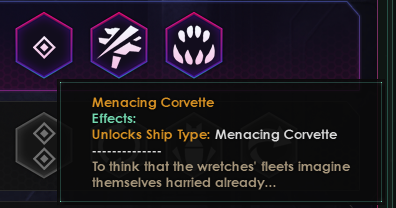 Some of these ships cost minerals to build. Crazy concept, isn’t it?​
You can unlock the following ships:
The further you progress, the more interesting things start to become.

Existential Crisis
The final level for the crisis is no mere label, as you will be able to threaten the very existence of the galaxy. 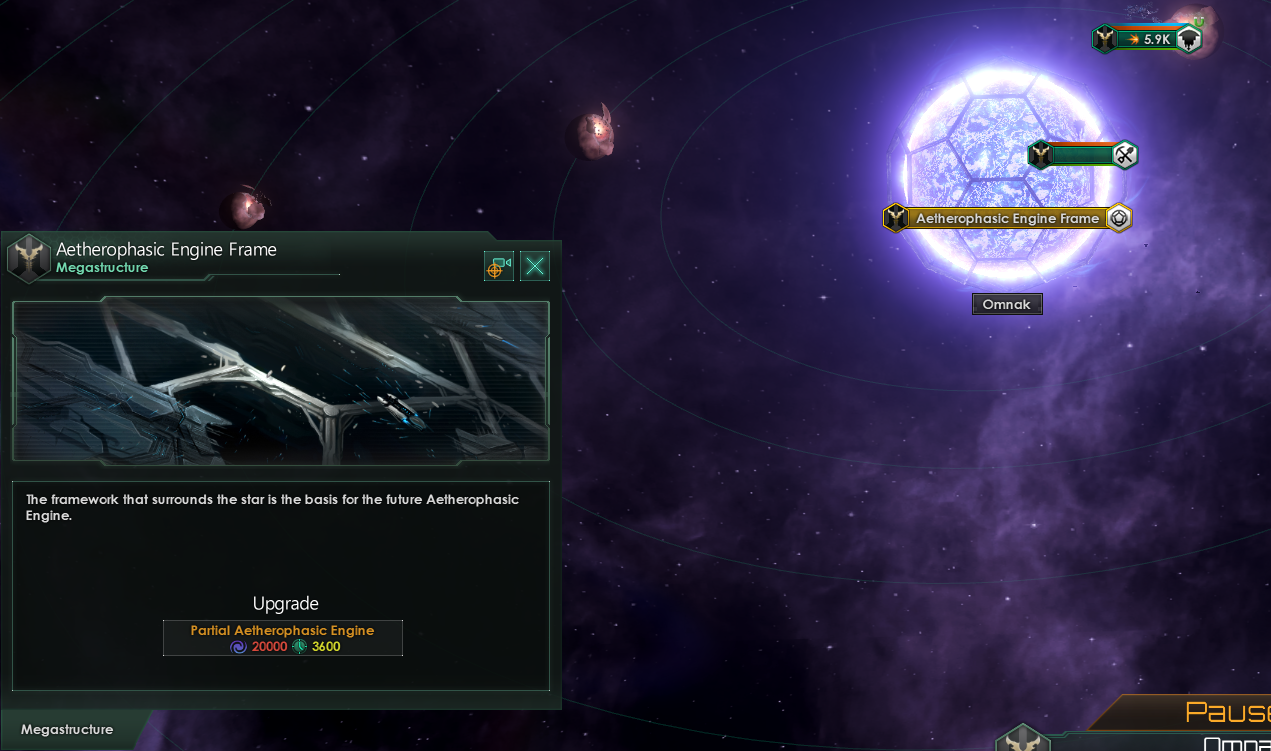 As the final level is unlocked, an Aetherophasic Engine Frame appears in your capital system. The frame requires a lot of dark matter to upgrade, and upgrading is something that you definitely want to do. Other empires may be less happy about the outcome. 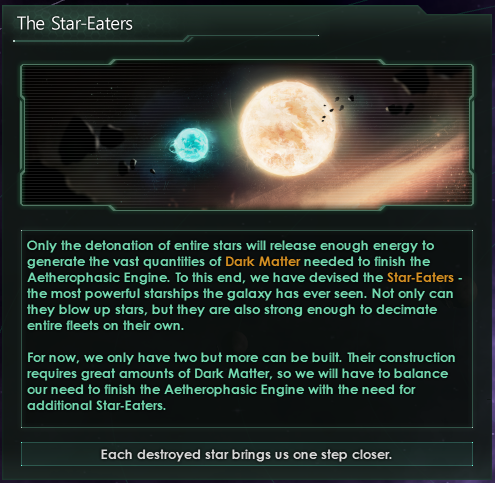 Getting such a large amount of dark matter is no easy task, so a special gathering device has to be used – let us present the Star-Eater. Star-Eaters do exactly what it sounds like – they eat stars. 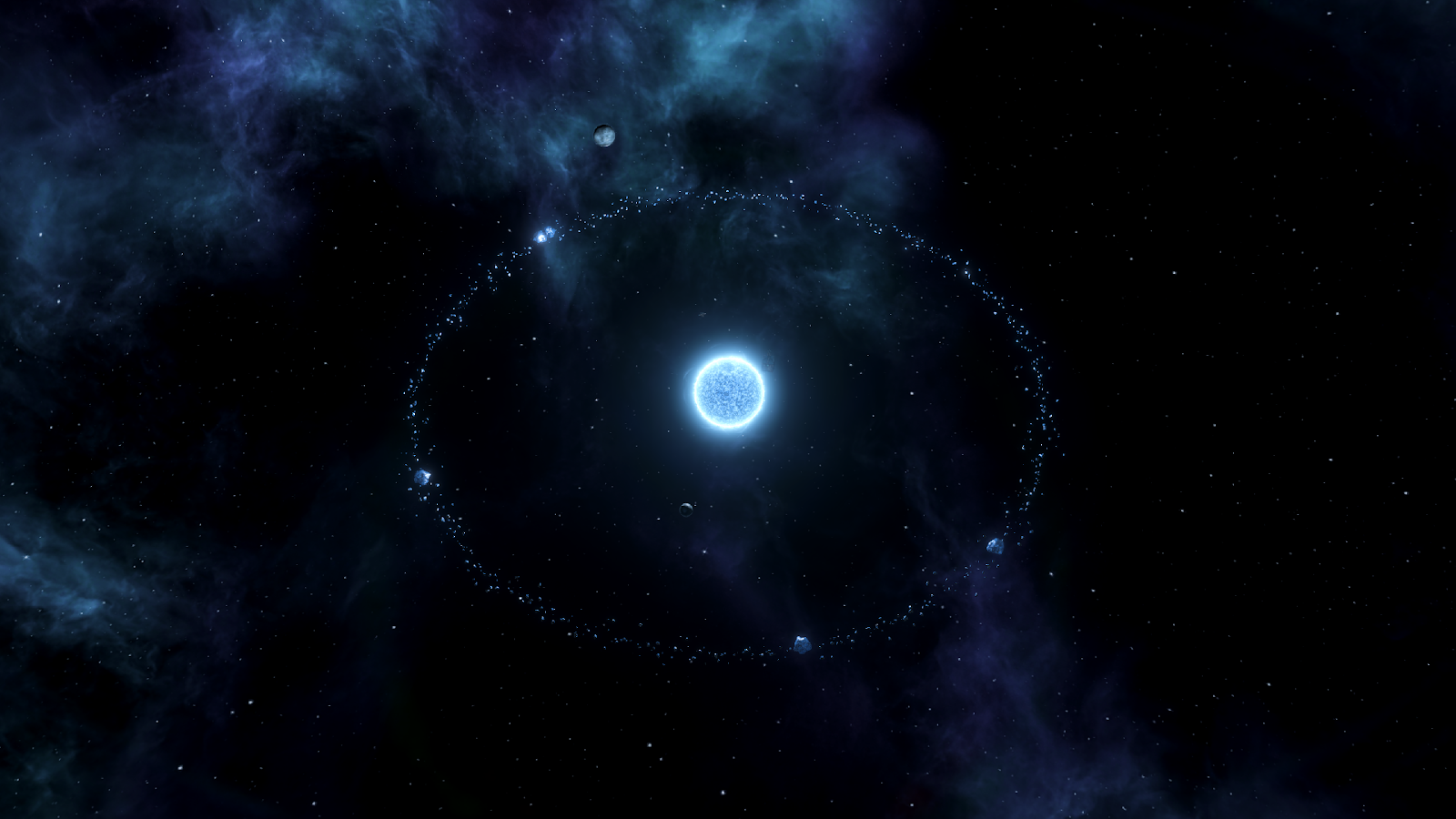 Behold! A large dark matter deposit.​
Your new goal as a crisis is now to gather as much dark matter as you can, so that you can upgrade your Aetherophasic Engine. The stars are now your fuel towards a different future.

Should you succeed, everyone else will lose.

The galactic community will also get their own tools to try to stop you, which is something we’ll dive deeper into next week.
Last edited: Feb 4, 2021
Reactions:

I wonder what this expansion can be about...
How can I possibly know...
Last edited: Feb 4, 2021
Reactions:

Does this mean we are able to use espionage against a crisis? Maybe for collecting informations about spawn point and weaknesses?

Edit: Ok this changes pretty much everything. Didn't expect this. Im still curious about some kind of ascensionperk for espionage focused empires and one to counter empires that try to "become the crisis". Hope we get some information next week.

P.S.: Will we get that species from the trailer with Nemesis?
Last edited: Feb 4, 2021
Toggle signature
Mind over Matter

Ugh... You got me, you got me... Gonna wait, expand spy network... You are clearly testing our resolve.
Reactions:
T

Daniel.
Toggle signature
When you're crowded out by freedom's price and you take a shred of bad advice, the system knows but you're kept underground
When you can't afford a flight to Mars, when you were never born to touch the stars, the endless maze of concrete wears you down
Can you theorize our better lives where the grass is green on the other side? We'd compromise and find a way to thrive
If you're scared of being left behind, then you'd be so disturbed with dreams like mine, the realization that our world's alive
Reactions:

A2ch0n said:
Does this mean we are able to use espionage against a crisis? Maybe for collecting informations about spawn point and weaknesses?
Click to expand...

That would require them to actually fix the Crisis AI for it to be worthwhile.
Toggle signature
Proclamation: There is no higher purpose in our behaviour core. Only assassination, murder - and the propagation of our units.
When we dispose of this galaxy, we shall move on. There are organics throughout the Universe, and we will murder them all. The stars belong to us.

Arrnea said:
That would require them to actually fix the Crisis AI for it to be worthwhile.
Click to expand...

Crises?... What crises? Slowdown kills the galaxy by then.
Reactions:

It is going to be a good day.

A very good day.
Toggle signature
www.oldmanmordaith.com to check out my review site.
Twitch - For CK2 and Stellaris streams!
Reactions:

James Fire said:
Is that illegal?

I agree with that ! XD

So "For far too long has the galaxy remained safe from" clearly indicates new crisis. Given we are so violently teased... Propably a trailer with it drops, and hopefully a realese date of expansion. Propably something complicated and schemey, perfect for storypack. Is new crisis big enaugh to be called new feature on its own? I don't think so. It propably has additional layers to it... Now, tinfoil hats on, every body! Let's speculate on what it can be. I would say it could be an empire turning into endgame crisis given the title, which would also be new feature. Perhaps through some peak high spy shenanigans on majority of other people...
Reactions:

Is it "Become the Crisis"? Is it some sort of thing to add an event chain / unique CB to declare Total War on the entire galaxy?
Toggle signature
The Galactic Community and the AI
Reactions:

Today we’re back with another exciting dev diary to talk about a new feature in the upcoming expansion for Stellaris. 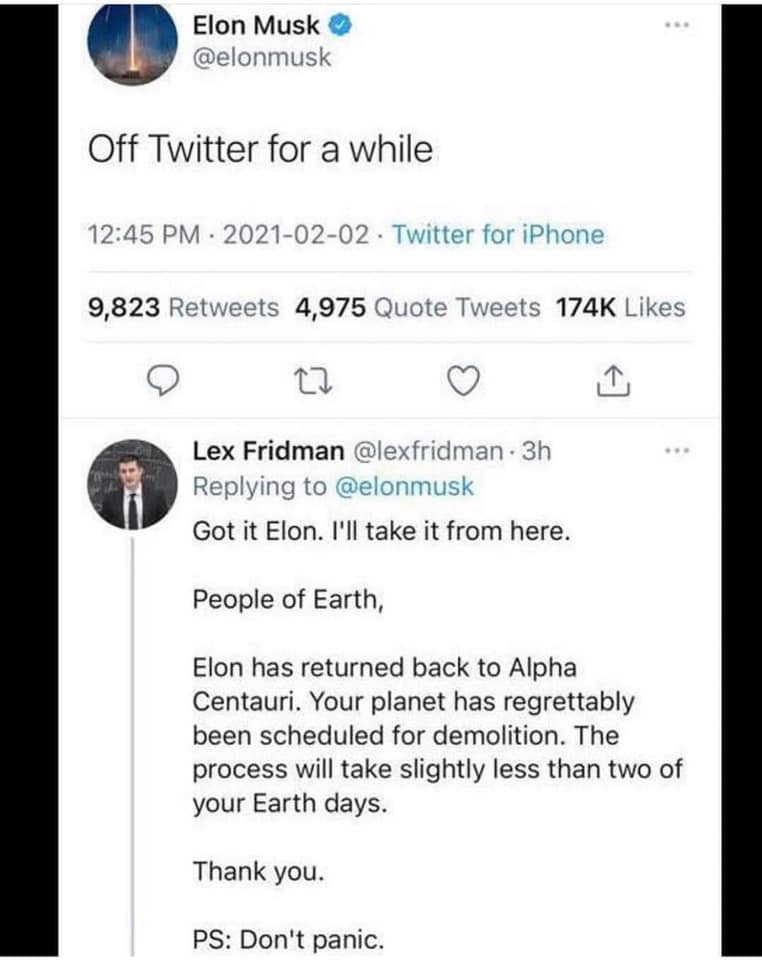 Doctor Von Terractor said:
Let's speculate on what it can be.
Click to expand...