Jump to latest Follow Reply
Menu
Install the app
You are using an out of date browser. It may not display this or other websites correctly.
You should upgrade or use an alternative browser.
Stellaris 48267 Bug Reports 28407 Suggestions 17552 Tech Support 2708 Multiplayer 366 User Mods 4490 Stellaris AAR (After Action Reports) Console edition 1151
Previous dev diary Next dev diary
Show only dev responses

Today our humble offering covers some of the possible Diplomatic Actions and Trade Deals that can occur between Empires. As most of you may know, the basic diplomatic model used in our previous games work quite well and we will use something similar in Stellaris. All Empires will have opinions of all other known Empires, and different actions, events and internal politics will often affect that opinion. The ethics of each Empire will of course play a heavy role here, as pacifist Empires will react quite differently to aggressive wars than would a xenophobic militarist one.

In Stellaris trade between Empires is a very direct affair. Players can create two-way deals lasting a set amount of time, and our ambition is that most diplomatic actions should be available here as tradeable objects. For example, you can offer another Empire a monthly payment of Minerals in exchange for Military Access and updated Star Charts for a period of 5 years, or receive a vital supply of the rare Garanthium resource by offering a nonaggression treaty as well as a guarantee of independence should the other Empire feel threatened. If you want to simply gift or demand something you can leave one side of the trade-deal blank, and the AI will react accordingly. 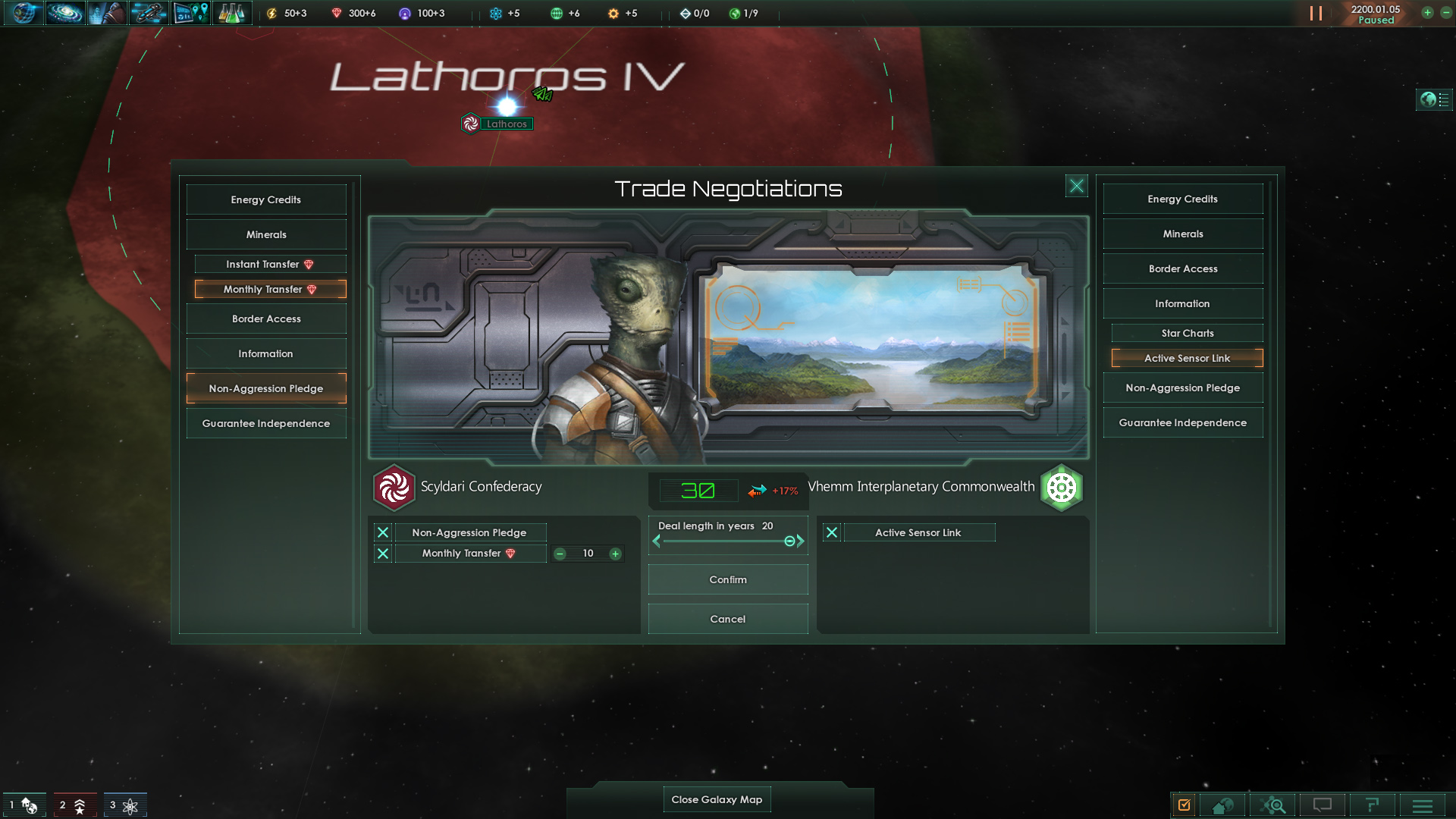 However, these kinds of trade deals will only happen between equal Empires and as most rulers know, it is better to gain something without having to give up something else. This is where more static diplomatic relationships come into play.

Tributary
A Tributary is forced to pay a set amount of their income to their Overlord each month and is most often established as the result of a lost war. The Overlord will not automatically defend them in wars, so the Tributary is caught in quite an unfortunate position until they have the military strength to either demand an end to their servitude or declare a war of independence.

Vassal
A Vassal is the most controlled type of subject-Empire. They will automatically join their Overlord’s wars, aggressive and defensive, and they have no autonomy when it comes to foreign policy or diplomatic relations. A vassal also run the risk of a full diplomatic integration by their Overlord.

Subject-actions
All types of subjects have a Liberty Desire expressing how content they are living under their Overlord’s rule. If a subject's Liberty Desire becomes very high they have a chance to start a war for independence, often waiting for an opportunity when they sense weakness (a taxing war, a larger uprising, a galactic crisis etc.). The Liberty Desire is a compound of a few different parameters but the main ones are the subjects opinion of the Overlord, the total military strength of all the subjects relative to the Overlord as well as if the subject can find someone who supports their cause.
As you would expect from our other games you are able to support the independence of another Empire’s vassal. Doing this will greatly increase their Liberty Desire (assuming the supporter has a fleet rivaling their Overlord) and may cause them to rebel. If they do, the Empire supporting them automatically joins their war for independence. You are also able to guarantee the independence of a smaller Empire, automatically entering the war on their side should they be attacked. 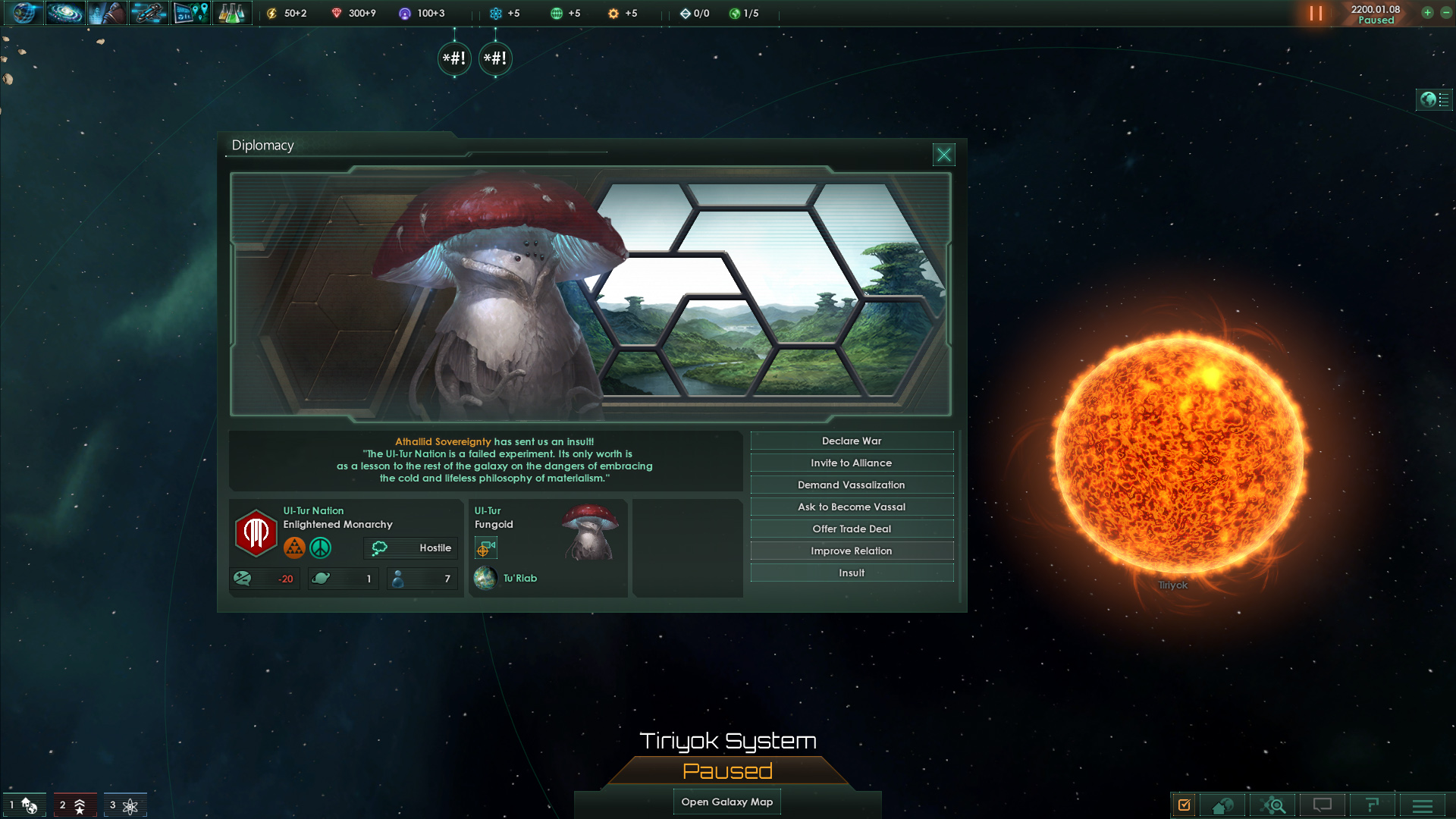 We’ve also added another vital diplomatic action to ensure that we can realistically model the complicated diplomatic interactions going on between advanced nations; the insult. Make sure to clearly express your feelings towards your enemy by insulting them, instantly lowering the opinion between your Empires greatly.

That was all for this week. Next dev diary will be written by Doomdark, expanding further upon War & Peace.
Last edited by a moderator: Feb 8, 2016
Reactions:

Awesome!
Toggle signature
Democracy: It's your vote that counts.
Feudalism: It's your count that votes!​
The Triune Kingdom : my Victoria 2 AAR. Playing as Illyria with the Divergences of Darkness mod.
Reactions:

Very interesting.
Also, Pacifist Monarchy seemed to be renamed to Enlightened Monarchy.
Last edited: Feb 1, 2016
Toggle signature
“Evil cannot create anything new, they can only corrupt and ruin what good forces have invented or made.”
Reactions:

This is going to be great. Thanks for the Monday fix.
Toggle signature
Arise King Kronos, bastard of the void.
His enemies fled, their eternal dark serenity destroyed.
Reactions:
J

I disagree with Garfield, Monday is turning out to be my favorite day in the week: the friendly neighborhood cat tends to be about, there are potato pancakes on the Lunch Menu, a course of CAD and the weekly Stellaris fix.
Toggle signature
Tenet of Y'thoth
Ethos: Materialist 2; Xenophile 1.
Traits: Intelligent ; Quick learners; Repugnant

Bit of a short DD, but hey it can't always be thunder and fireworks every week. I have to say it looks very EU4-ish though.
Toggle signature
Stellaris Theocracy:
"...then fireth thy particle cannons at thy foe, who being naughty in My sight, shall snuff it."
Reactions:

I'm really glad that the diplomatic model won't diverge too from the tried and true one already used in other games. This is something I was initially worried about.

A very brief question: If you were to receive a resource from another empire, would that resource be able to be used Empire wide, or only on a specified planet?

edit: also, is there going to be a diplomatic relations maximum, as there is in EU4?
Last edited: Feb 1, 2016
Toggle signature
Check out my Youtube, where I upload Stellaris videos!
Reactions:

Is technology tradable? I sure hope not, that's usually the most abusable mechanic in 4X.
Reactions:

Also, Trandoshan/Space Iguana and Mushroom Kingdom empires... confirmed!
Toggle signature
Stellaris Theocracy:
"...then fireth thy particle cannons at thy foe, who being naughty in My sight, shall snuff it."
Reactions:

It's nice to know how we were insulted, it's a dramatic improvement over the insults in EU4
Toggle signature
Lurker no more!
Reactions:

I am really digging the mushroom people. They look a bunch of fungis to hang out with.

Seriously though, this sounds good.
Toggle signature
"It is well known that nothing is such thirsty work as the acquisition of knowledge."
Reactions:

we already knew that we wouldnt really get a civilian sector for trade so this system works fine...and i am SO SO SO glad that we cant trade research!!! I hate that in other 4x games, and i am really happy with this way!
Toggle signature
Soon to be a Major religion near YOU!
Reactions:
J

I am very pleased by what I read here This will make the lategame really interesting. .... and yesss .. Diplo-Annex
Toggle signature
Vier G dürfen einem Feldherrn nicht fehlen: Geld, Geduld, Genie und Glück. - Helmuth Graf von Moltke
Time is everything; five minutes make the difference between victory and defeat. - Lord Horatio Nelson
Ne jamais interrompre votre ennemi quand il fait une erreur. - Napoleon Bonaparte
I don't know what effect these men will have upon the enemy, but, by God, they frighten me. Duke of Wellington
- mere scum of the earth, and it really is wonderful that we should have made them the fine fellows they are. Duke of Wellington
Amy: Please tell me you have a plan. - The Doctor: No, I have a thing. It's like a plan, but with more greatness.
Reactions:
J

The diplomatic options don't seem to come in the same abundance as in euiv (which have had some time to expand them). Ofcourse I don't really know what is hidden under trad though. The possibility to make trade deals like in civ is cool though.