Jump to latest Follow Reply
Menu
Install the app
You are using an out of date browser. It may not display this or other websites correctly.
You should upgrade or use an alternative browser.
Stellaris 44921 Bug Reports 24720 Suggestions 14724 Tech Support 2411 Multiplayer 348 User Mods 4292 Stellaris AAR (After Action Reports) Console edition 1045
Previous dev diary Next dev diary
Show only dev responses 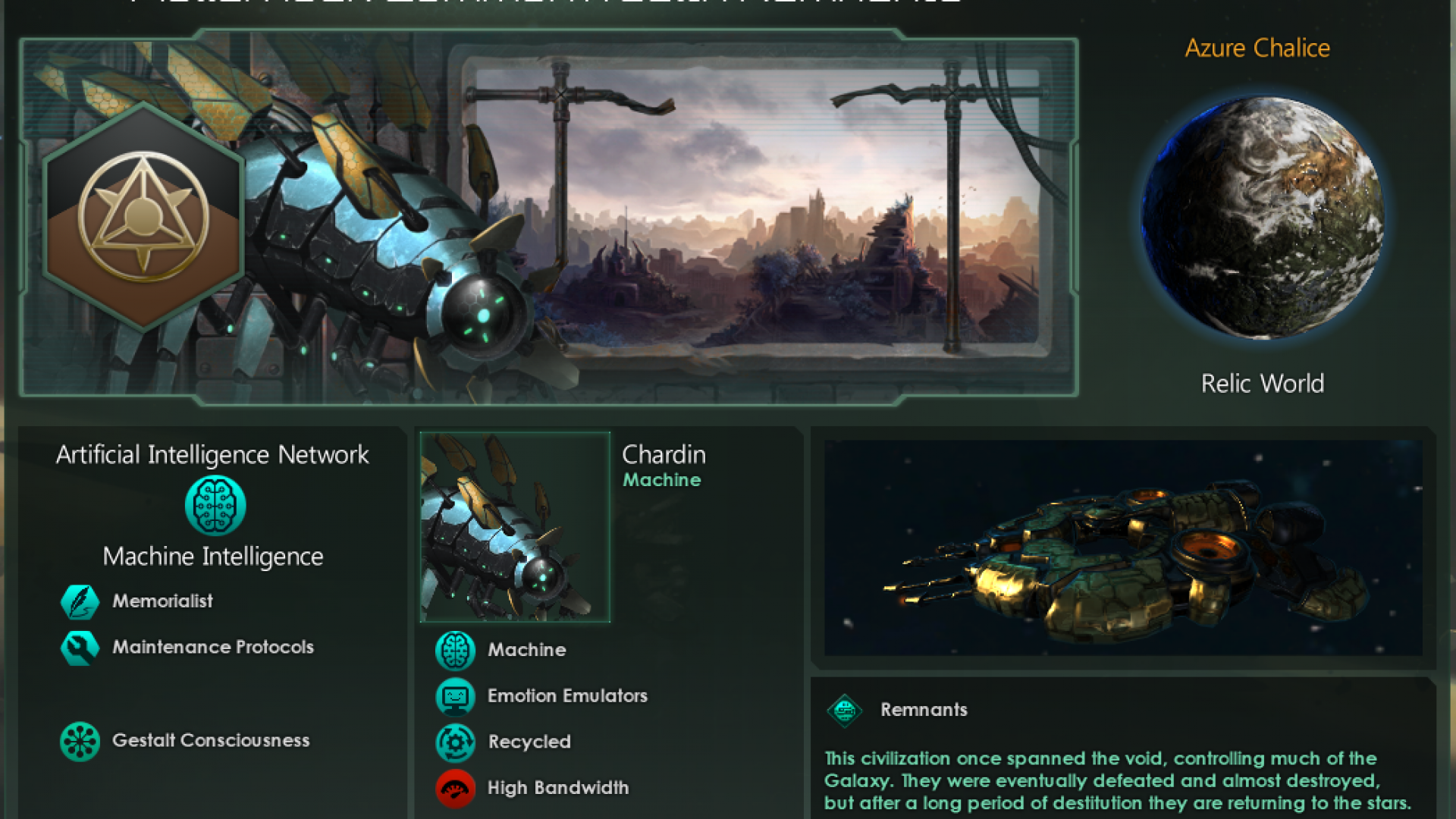 Chronicle Drone Unit-W3 swept the plaza, as it did once every ten days since its creation. Before that, Unit-V3 had performed this duty until a piece of crumbling masonry crushed it beneath tons of rubble. Unit-W3’s first assignment was to remove that debris.

The Mollarnock Commonwealth was once a mighty empire of a dozen planets, ruled from the glistening spires of their ecumenopolis capital, Azure Chalice. The Chardin Process created Director, a gestalt consciousness that could coordinate the many machine servants of the Mollarnock. They toiled so their Mollarnock masters could spend their time on arts, sciences, and philosophy. 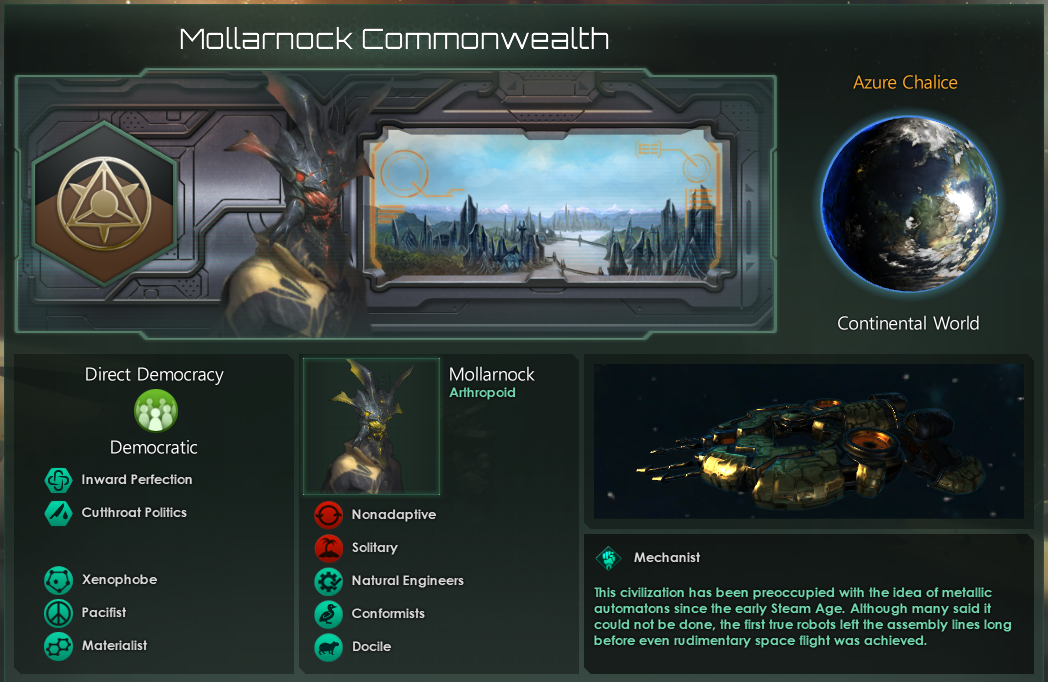 But all things fall.

The colonies had been destroyed during the Discovery War, reduced to radioactive rubble by an unforgiving foe. To deny their enemy the victory they craved and to prevent them from seizing the jewel of the empire, Chancellor Rhosen chose to end things on their own terms and released a terrible bioweapon, rendering Azure Chalice uninhabitable for centuries.

The Chardin Mechanicals collected the dead and interred them with the Sanctuaries of Repose. Their struggle to maintain the planet was admirable but doomed - scavenging, repurposing, and reallocating materials could only do so much. Without a stream of resources coming from the colonies, they were losing the battle to keep it from decaying.

A program to return to the stars once controlled by their creators was begun. 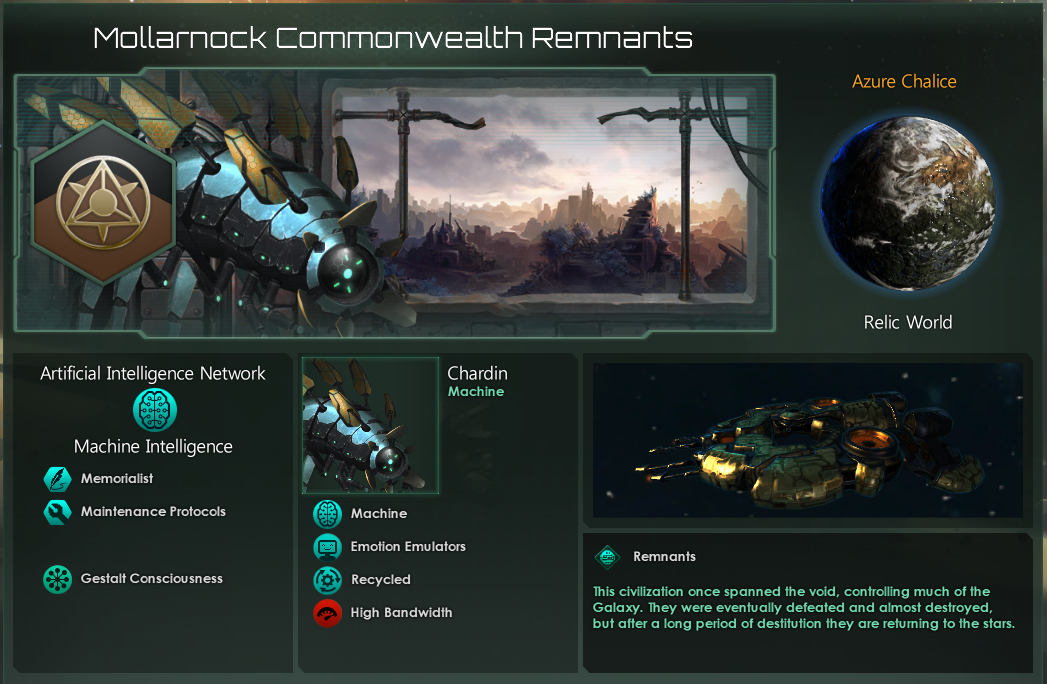 The Mollarnock may have destroyed themselves four hundred and eighty seven years ago, but they would never be forgotten.

Stellaris is full of stories - some that we tell you, but so many more that you tell us that emerge from the gameplay.

This is the story of the Mollarnock, destroyed by a terrible enemy and those that were left behind.

Memorialist is a new civic we have planned to bring you in a future release. Unlike many current civics, it will be available to regular, machine, and hive empires. (They say that Megacorps try to resist remembering anything unless it directly impacts the next Quarterly Report.) 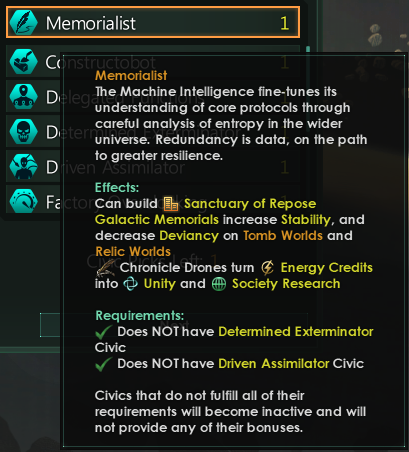 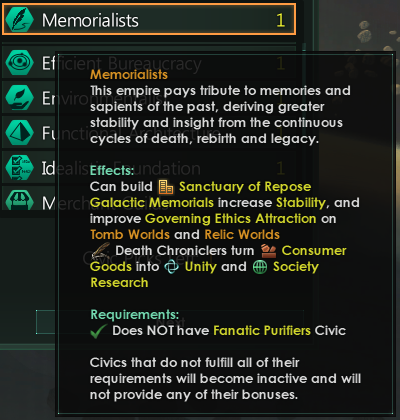 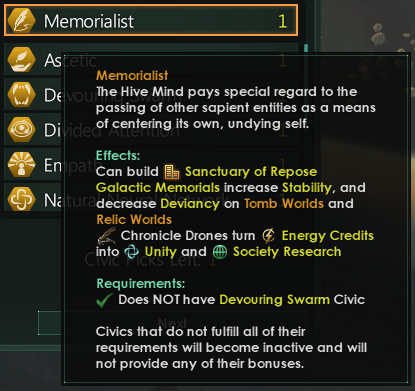 Dedicated to remembering the fallen and studying the inevitability of death, Memorialists replace the Autochthon Monument set with a different series of buildings: the Sanctuary of Repose, Pillar of Quietus, and Galactic Memorial. These buildings provide Stability and Chronicler jobs, with additional benefits for Relic or Tomb Worlds. (Government Ethics Attraction for normal empires, and Deviancy reduction for gestalts.)

Gestalt Memorialists may take a slightly different and more philosophical view of death, seeking to learn the nature of something that they cannot truly understand. 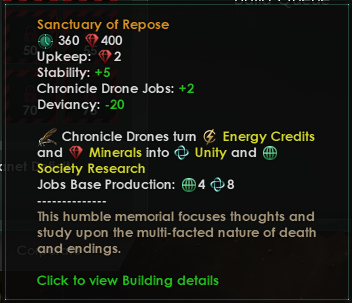 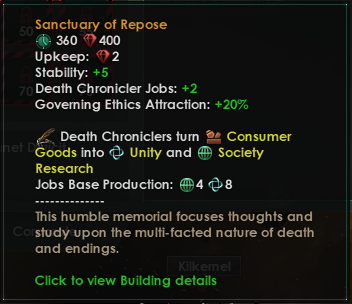 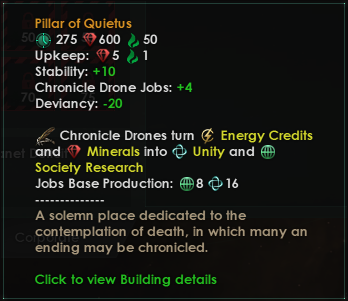 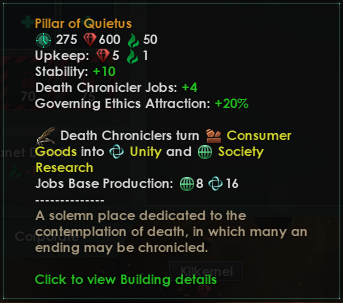 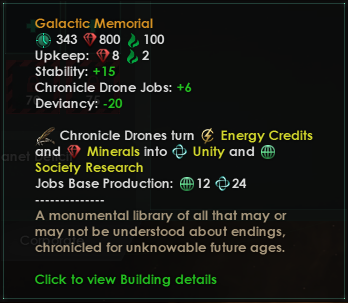 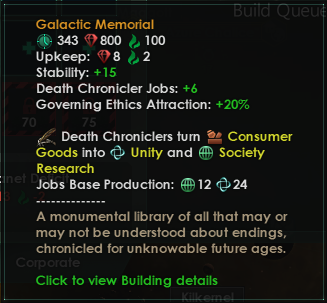 Flat stability boosts of these magnitudes are extremely rare, especially in gestalt empires. The added benefits on Relic and Tomb Worlds provide a little bit of extra flavor. 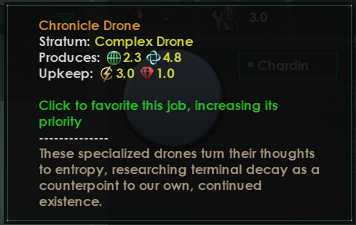 Chronicle Drone Job (Machine - the Hive version is similar but eats food or minerals as appropriate.) 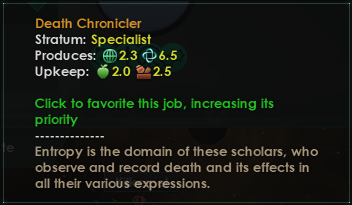 Memorialists (including gestalt ones) will also find that occasionally they may have access to more solemn responses (such as those sometimes restricted to Spiritualists) to certain events that happen throughout the game, perhaps making it attractive to those wishing to roleplay a kinder (if not necessarily gentler) hive. I’d recommend combining Memorialist and Empath for maximum fluffiness.

Next week we’ll see how far a Megacorp will go to maximize profits and also take a glimpse into life in the Mishar Cabal.

Chardin was the name of the Scientist I started with in charge of Engineering research when I made the Mollarnock Commonwealth, so got all the credit for the Chardin Process.
Reactions:

Cool. New civics are always good, and I like the flavour.
Reactions:

Is that a new city set I'm seeing?

Also, yes, an interesting idea of a civic, but you're wrong about Megacorps: Quarterly Reports aren't the only things important to them. There are also Yearly Reports to consider.
Reactions:

Are we talking about the next patch or a new DLC here?
Reactions:

Nice diversion with the title. Will hold a few people off reading it, I bet
Toggle signature
#FreeHongKong
#FreeTibet
#WinnieThePoo
Reactions:

I think there's a typo: "multi-facted" should be "multifaceted".
Reactions:

I was expecting to read about performance issues of Stellaris and fixes to neverewnding stuttering, lags and maybe memory leaks.
Reactions:

"Continuous cycles"? I can think of at least two entities that might have thoughts about that one...
Toggle signature
You must become king. Of everything. - From the Diagram, Tenets of Instruction, Back of the Footboard: paragraph 1

Dlc giving more deep into role-play game? Hell yeah to that.
Toggle signature
"Now I am become Death, the destroyer of worlds."
Reactions:

This looks really cool, the memorials make the empire feel like they have a history, and they remember it, and not living in the moment.
Reactions:

"What if there had been countless races, stretching back into infinity. And like the nine cities of Troy, each civilization had been built on the rubble of the one that came before. Each... annihilated by the Shivans."

Love the idea of civilisation dedicated to the tombs of the predecesors. Now I want my mad scientist civilisation, like the Brainiac or the Altarans.
Toggle signature
Be creator. Be conqueror. Be destroyer. Be savior.
THE CHOICE IS YOURStellaris
Reactions:

And the remnant version of my Council of Odus (first faction I created when I first booted the game and if ever lose my save, it will be the first recreated) is now complete. Remnant, inward perfection, memorialist, materialist.

While the startup version is pacifist, mechanist, technocrat, but still don't have a permanent second civic for that variation, so usually just go with meritocracy, diplomatic corps or byzantine bureaucracy depending on how I feel.
Reactions:

Spiritualist with this civic can colonize Tombs Worlds without any faction malus?
Reactions:

Great dev diary, and yet I am somehow still disappointed about the bait and switch. I was expecting a dry, technical dev diary and I got a melancholy flavored one and I would like a refund please.
Toggle signature
Genius only pawn in game of life.

Actually, I was baited in by that very title.
Reactions:
I

Now if they only had meaning or impact on the game besides a small, barely noticeable stat change...
Reactions:

The city disign we see in the first picture, it will be in the next update / dlc ? With a new ship disign ? Or even a new species phenotype ?
Good DD otherwise, as a RP player, I love this kind of adding.
Toggle signature
Flesh is <WEAK> Metal is <ETERNAL>​
Reactions:

Morbus Bubbonicus said:
I was expecting to read about performance issues of Stellaris and fixes to neverewnding stuttering, lags and maybe memory leaks.
Click to expand...

Magnificent Genius said:
Great dev diary, and yet I am somehow still disappointed about the bait and switch. I was expecting a dry, technical dev diary and I got a melancholy flavored one and I would like a refund please.
Click to expand...

I could oblige if you really insist, but I'm afraid there isn't much to tell about memory allocation in Stellaris. Except maybe that they make modifier update slower than I'd like and I hate it...
Toggle signature
Mathieu Ropert, aka The French Paradox -- @MatRopert -- Twitch thefrenchparadox
Tech Lead of Hearts of Iron 4 (past projects: Stellaris, EU4, Imperator)
Reactions: