Jump to latest Follow Reply
Menu
Install the app
You are using an out of date browser. It may not display this or other websites correctly.
You should upgrade or use an alternative browser.
Stellaris 44877 Bug Reports 24602 Suggestions 14685 Tech Support 2406 Multiplayer 348 User Mods 4289 Stellaris AAR (After Action Reports) Console edition 1045
Previous dev diary Next dev diary
Show only dev responses

Today we’ll touch upon a subject dear to the hearts of many galactic rulers - namely Edicts!

Background
Edicts are meant to be a way for your empire to focus on certain issues without necessarily taking a permanent stance on them. More permanent stances on issues would be covered by Policies.

Although we felt that Edicts do fit this role pretty well, there were a couple of issues with the system that we think could be improved. The fact that Edicts would always time out felt like a little bit of unnecessary micromanagement at times, and didn’t really emphasize the feeling of “I am choosing to focus on these 2 things right now”. We felt that it would fit better if Edicts had a greater emphasis on making choices that you can go back and change, rather than being things you constantly go in and refresh. 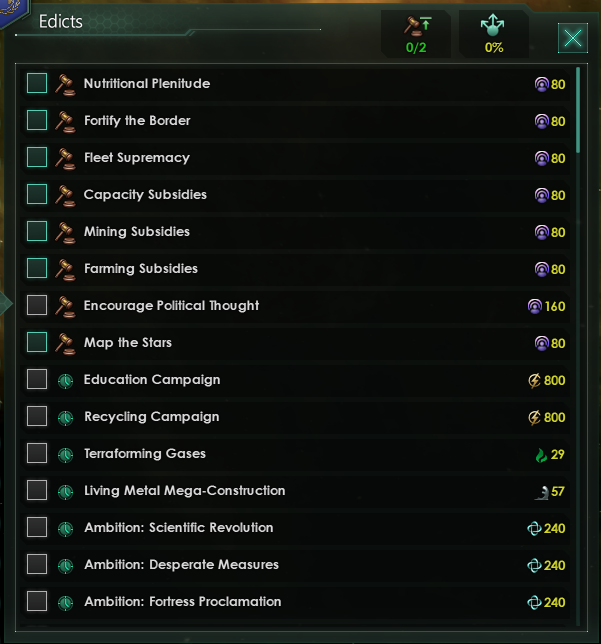 An old friend with a slight makeover. Some Edicts are now toggled on/off instead of being on a timer.​
Edict Capacity
Enter Edict Capacity – a new mechanic that puts a soft limit on how many Edicts of a certain type that you can have active at once. Similar to Starbase Capacity, your empire will suffer penalties if you exceed it, and the penalty in this case being Empire Sprawl. For every toggled and active Edict above the Edict Capacity, your Empire Sprawl will be increased by +25%.

By default, an empire will start with an Edict Capacity of 2, and can be modified by things like Authority, Civics and Ascension Perks. These values are very prone to being changed as more balance feedback comes in. 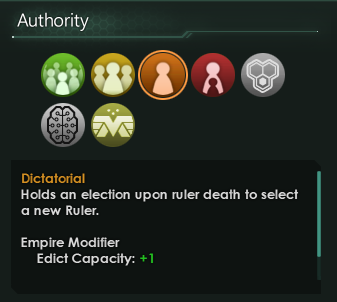 You can now vigorously enact more Edicts.​
Not all Edicts will use Edict Capacity, but rather only the ones that last until cancelled will. Edicts that can be toggled will have an Activation Cost and a Deactivation Cost, which is usually Influence. This means that you are paying the Influence when you are making changes, rather than paying to upkeep the Edicts you want.

Edicts that last until cancelled will be marked with a different icon from the edicts (and campaigns) that expire once their duration runs out.

An example of two different Edicts. Red: toggled - lasts until cancelled and uses Edict Capacity. Blue: temporary - lasts for 10 years and does not use Edict Capacity.​
Edicts
Some of the Edicts have changed and we have added a couple of new ones, to better fit with the Edict Capacity. Let’s take a look at a few of them: 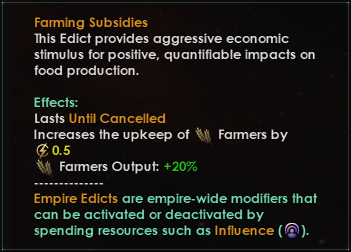 Whenever you need to stimulate your economy, subsidies can be the way to go. There are Farming, Mining, Energy and Industrial subsidies. 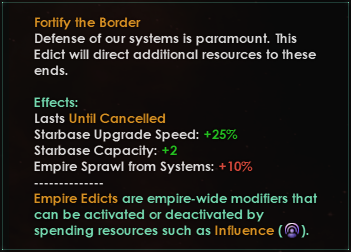 Neighbors suddenly turned hostile? Need to secure your borders? Pass this Edict to refocus your efforts! 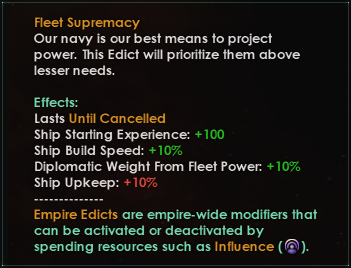 Has the galaxy become more hostile? Do you need to build a powerful fleet to project your power? Focus on Fleet Supremacy for a more powerful and imposing fleet.​
Pop Growth is problematic, so we have made some changes in the upcoming patch that will reduce Pop Growth from different sources across the board (more on that later). Food Policies are no more, and the popular Nutritional Plenitude is now a toggled Edict instead. 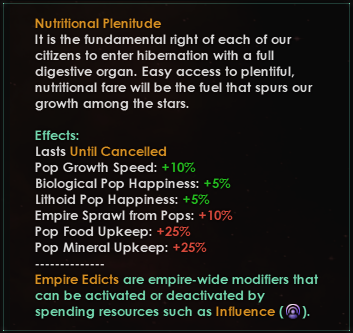 No longer a food policy (they don’t exist anymore). There are different versions for Hive Minds and Rogue Servitors.​
Resource Edicts, Campaigns and Unity Ambitions
The model for the new Edict Capacity doesn’t fit very well for all types of Edicts, which is why the rare resource Edicts, Campaigns and Unity Ambitions remain unchanged and keep working like you are used to. This is also better for modding purposes, so that modders have the opportunity to use Edicts however they see best.

Finishing thoughts
Overall we feel like the new system better allows us to structure how the players get the tools they need to focus their empires for certain tasks. As we make more additions to the game in the future, this new system will also allow us to give the players more tools to address certain issues.

That is all for this week! We will be back again next week with another dev diary, this time about some federation-related content!
Reactions:

It's cool that this is a soft cap. From the reactions I saw, it seems others thought it was a hard cap. I wondered that too. And I was going to ask if there were "several" different kinds of edicts due to the rough power levels of them, but it seems I don't need to

Instead, can I ask that we get a "Liberator" stance for Pacifists in place of "Belligerent/Supremacist"? And that they get a faction that accommodates this?

So does this mean that the Industrial policy is no more too?
Toggle signature
The universe is probably littered with the one-planet graves of cultures which made the sensible economic decision that there's no good reason to go into space - each discovered, studied, and remembered by the ones who made the irrational decision. - Randall Munroe
Two possibilities exist: Either we are alone in the Universe or we are not. Both are equally terrifying. - Arthur C. Clarke.

Prediction: everyone will always be using Nutritional Plentitude. And with the exception of "Map the Stars", no one is ever going to switch edicts once picked.
Toggle signature
[CK2 MOD] Hide the Jewelry! | [Stellaris] Planetfall | [Stellaris] Pinterest Portraits
"Contraria sunt Complementa." -- Niels Bohr
Reactions:

Makes sense. Specially edicts costing some maintenance while they are active.

I'm very excited to hear about changes to Pop Growth at some point, too. I think it's one of the biggest issues currently.
M

I was hoping that it will be the democratic/oligarchic authorities that would get more edicts. As is democracies really feel like a bad choice.
Toggle signature
Sit now there, and look out upon the lands where evil and despair shall come to those whom thou allied. Thou hast dared to mock me, and to question the power of France, master of the fates of Europe. Therefore with my explorers thou shalt see, and with my spies thou shalt hear; and never shall thou be released from vassalage until all is fulfilled unto its bitter end.

I'm going to be bathing in influence. I guess I'll find a good use for all the excess influence in building habitats that I now can get earlier in game.

grekulf said:
Pop Growth is problematic, so we have made some changes in the upcoming patch that will reduce Pop Growth from different sources across the board (more on that later)
Click to expand...

I'm really looking forward to this i hope there will be someday a new mechanic, maybe one unrelated to the number of planets you own
Toggle signature
Mind over Matter

So does Map the Stars also have a negative now? Does every edict?
Since there's not much to talk about in this diary, can't you just post every updated edict?

I like the concept overall, but a whopping 25% Empire Sprawl penalty for one additional edict seems a bit extreme. Hope the numbers aren't final yet!
Toggle signature
Where earnest striving had failed, mockery had succeeded. He had staked his life on nonsense, and the prize was his.
Reactions:

grekulf said:
Pop Growth is problematic, so we have made some changes in the upcoming patch that will reduce Pop Growth from different sources across the board (more on that later).
Click to expand...

I'm hoping any such change is more than just some general nerf. I thought the problem with pop growth wasn't that it was too fast, but that there was only one good way to obtain it: aggressive expansion and acquiring as many colonies as quickly as possible.
Toggle signature
Some high-concept Stellaris suggestions
Make leaders something more than stat modifiers.
Unify diplomatic interactions under a single paradigm.
Reactions:

Edit2: @grekulf Are these the base costs or reduced by some civics/ethics? 80 somehow looks to me like it is reduced in the screenshot.
Last edited: Apr 23, 2020
T

How are these edict costs calculated, is it a fixed amount or does it scale with the empire size.
Second does implenting an edict costs more than revoking it or is it an identical amount.
Toggle signature
Spying on Xenos is fun

Yeah, but it might have a downside to it as well now.

I don't know this sounds pretty unnecessary to me.
What was wrong with the edit system?
Reactions:

Looks good. Nutritional plenitude makes so much more sense as an edict. I like that you can use excessive administration capacity for additional edicts.

I guess the obvious question here is - if autocracies are getting bonus edict capacities, what are other authorities getting? I guess we will find out in time!
Toggle signature
No, no, you are not thinking; you are just being logical.
- Niels Bohr

Is there any chance of some kind of "continue" option for campaigns, timed edicts and planetary decisions? Re-buying them once they expire can get tedious if doing so is a no-brainer, so having them convert to a monthly cost once that happens would be better.
Reactions:
Show hidden low quality content
You must log in or register to reply here.
Share:
Facebook Twitter Reddit Tumblr WhatsApp Share Link
Top Bottom