Jump to latest Follow Reply
Menu
Install the app
You are using an out of date browser. It may not display this or other websites correctly.
You should upgrade or use an alternative browser.
Stellaris 44596 Bug Reports 24336 Suggestions 14391 Tech Support 2355 Multiplayer 344 User Mods 4255 Stellaris AAR (After Action Reports) Console edition 1035
Previous dev diary Next dev diary
Show only dev responses
Greetings to the void-dwellers and planet-bound alike!

This week we’ll be talking about some changes we’re planning on making to the engineering marvels that are Orbital Habitats. These are currently slated for the May update that grekulf mentioned two weeks ago.

Introduced in Utopia, Orbital Habitats provide a way to continue some form of limited expansion after colonizing all of the habitable planets within your empire. In the 2.3 “Wolfe” update, we added some specialized districts to them based on the celestial body they orbited, opening up the possibility for things like building dedicated astro-mining facilities, and recently in Federations, we added a Void Dwellers origin which let you start your empire among the stars in three habitats.

This May, we’ll be introducing multiple tiers of habitats. These will be accessible to anyone with the Utopia expansion or using the Void Dwellers origin from Federations.

The first tier of Orbital Habitats now comes a bit earlier in the tech tree and require fewer alloys to build. The basic Orbital Habitat is smaller than the old version, starting with 4 district slots. They also have a simpler appearance than the ones currently in the game, a core of a station to build upon later. 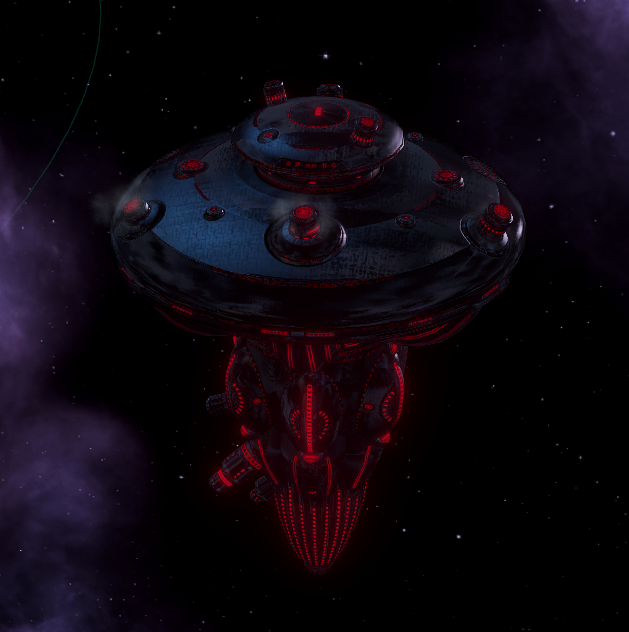 The Habitat Expansion engineering technology is placed around where the Habitat technology used to be in the tech tree, and will allow you to upgrade an Orbital Habitat that has filled all of its districts to an Advanced Habitat using a planetary decision that costs some time and alloys.

Upgrading to an Advanced Habitat provides 2 additional district slots and allows basic housing buildings to be built even for normal empires.

The Advanced Habitat upgrade adds a ring of modules around the central core. 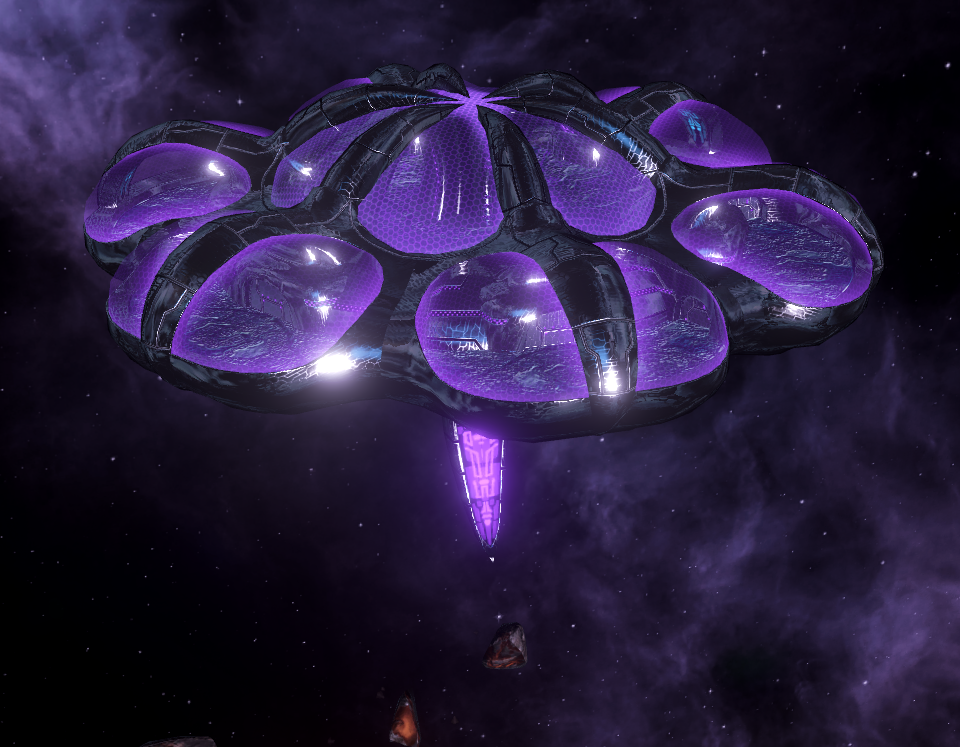 A third technology permits upgrading a fully developed Advanced Habitat that has a Habitat Central Control into a Habitat World.

Habitat Worlds have 8 districts, shown as another ring of modules around the habitat. 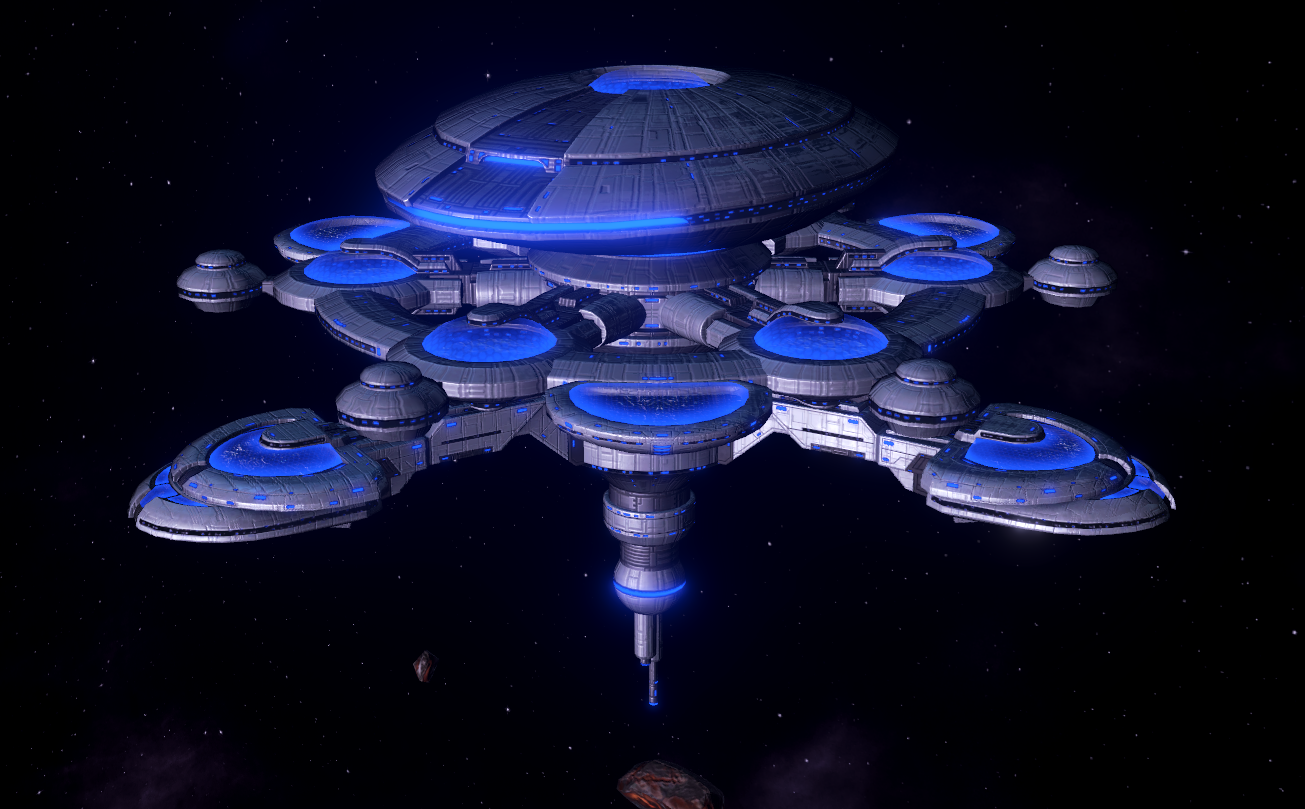 The Voidborne Ascension Perk has undergone a few changes as well. 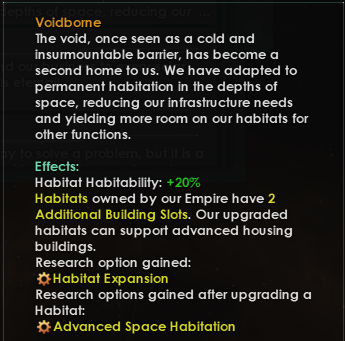 The perk now gives each of your habitats 2 additional building slots and automatically grants access to the Habitat upgrade technologies. Regular empires with the perk can also build advanced housing buildings on their Advanced Habitats and Habitat Worlds instead of being limited to only basic structures.

Void Dwellers will automatically start with the Habitat Expansion tech option available for them to research, and their primary habitat will begin as an Advanced Habitat while the other two will begin as somewhat cramped regular Orbital Habitats. In our internal playtests, we’ve found that Voidborne is exceptionally valuable for them to pick up early for the extra building slots, and the reduced alloy cost of building new habitats should relieve some of the additional pressure caused by the smaller starting size of their secondary habitats.

During this pass we’ve taken care of a handful of other habitat related issues, such as those built above nanite deposits now retain the nanite production, and habitats built above Zro, Dark Matter, Living Metal, or Nanite deposits are now treated as research habitats. As a quality of life improvement, you no longer need to remove orbital mining or research stations to build a habitat, the construction process will automatically disassemble them upon habitat completion.

Here are the full tiers of a few of the habitat types:

Next week we’ll have another sneak peek at the May update, see you then!
Click to expand...

Does this mean that the bonuses on Voidborn are going away and being replaced by the above?

This looks really cool! I can't wait for the May update!

My personal opinion: The main reason habitats are not very good right now is that their districts and capitals are pretty bad compared to the capitals on normal planets. Can we have regular capitals and housing-districts with clerks please?
F

Does this raise the amount of buildings on habitats to 18?
Reactions:

fodazd said:
My personal opinion: The main reason habitats are not very good right now is that their districts and capitals are pretty bad compared to the capitals on normal planets. Can we have regular capitals and housing-districts with clerks please?
Click to expand...

I think the big reason for this is that none of the techs or traditions that effect cities effect habitat districts.

Are you going to make proper habitat models for fallen empires? Or models for starbase tiers in-between unupgraded Starbase and fully upgraded Citadel? It's weird to see those replaced with Mammalian or Avian placeholders.
Last edited: Apr 9, 2020

Any plans on changing some traditions and techs that are only usefull for planet dwellers for habitat dwellers like you did with hive minds and such?
Toggle signature
“And all those exclamation marks, you notice? Five? A sure sign of someone who wears his underpants on his head.”
Reactions:

Thank you for this nice Dev Diary @Eladrin

I have some questions pertaining Void Dwellers:

Do you plan to give the Void Dweller Origin some unique Traditions (like Life-Seeded f.e.) that replace some of the obsolete ones like Prosperity?

Are you aware of the bug where the Capital habitat loses its Capital destination when you develop it for a time?

An answer would be much appreciated. o/

What about the issues habitat-only empires have with Traditions (i.e. some traditions only giving planet bonuses)? Will these be swapped out for players with the void dweller origin?

Edit: ninja'd
Toggle signature
"There is no such thing as an unbiased argument - indeed, facts support bias', or else they wouldn't exist." - Grand Historian

As a voiddweller myself, I really like this update. However, will it be possible to apply all bonus for city districts to the housing district of habitats as well - just for those empires with the origin maybe?

Bentusi16 said:
I think the big reason for this is that none of the techs or traditions that effect cities effect habitat districts.
Click to expand...

...Gestalts DO get maintenance drones from the housing district on habitats, which is hilarious because gestalts are precisely the empire-type that can't be void-dwellers.
Reactions:

Will the two extra building slots be permanently unlocked for any habitat that passes through the hands of an empire with the Voidborne perk?
Toggle signature
Some high-concept Stellaris suggestions
Make leaders something more than stat modifiers.
Unify diplomatic interactions under a single paradigm.

How about A TON of perks and traditions simply not affecting habitats and being useless for Void Dwellers?

Do you have plans to switch culture workers to a priests in leisure district for spiritualists? Like we already have entertainers switched to duelist for Warrior Culture civic.

fodazd said:
My personal opinion: The main reason habitats are not very good right now is that their districts and capitals are pretty bad compared to the capitals on normal planets. Can we have regular capitals and housing-districts with clerks please?
Click to expand...

I disagree with you, atm you pay 500 mineral to have district that can provide specialist job and housing on habitats where as you need 400 minerals for a simple building whitout housing on planet and with one less job (by paying more ressources you can upgrade it but now you can do the same on habitats). The best exemple for this are labs vs district lab (and we all now that currently tech is nearly king) and service & commercial building vs commercial district.
Toggle signature
BipBip Hunter
A

I'm assuming influence cost remains the same? Will this be applied when building the new 'basic' style, or be a cost for upgrading one to the normal/advanced tiers?