Jump to latest Follow Reply
Menu
Install the app
You are using an out of date browser. It may not display this or other websites correctly.
You should upgrade or use an alternative browser.
Stellaris 47793 Bug Reports 28017 Suggestions 17205 Tech Support 2659 Multiplayer 363 User Mods 4461 Stellaris AAR (After Action Reports) Console edition 1141
Previous dev diary Next dev diary
Show only dev responses

As I mentioned last week, we have begun working on a larger free update targeted for May, and it would be fun to share some of the new things you will be able to discover.

2.6.3 is still planned to be released as an opt-in beta SoonTM, so stay tuned for more information about that.

But for now, let’s continue and talk a little bit about what you’ll expect to see in the free May update.

Background
We’ve felt that the galaxy sometimes feels a bit empty now, compared to how it used to back in the day. Since the AI is a bit more proactive in hunting down hostile space fauna you are encountering these alien lifeforms much more seldom. We wanted to reinvigorate the galaxy with more alien life, and allow them to continue existing for a longer period of time.

Tiyanki
The tiyanki now have a home system, Tiyana Vek, which can continue to spawn more space whales throughout the continuation of your game, unless the tiyanki in the system have been hunted to extinction. The spawning of new tiyanki will also depend on galaxy size, which sets an upper limit for how many fleets can spawn (in relation to already roaming around). 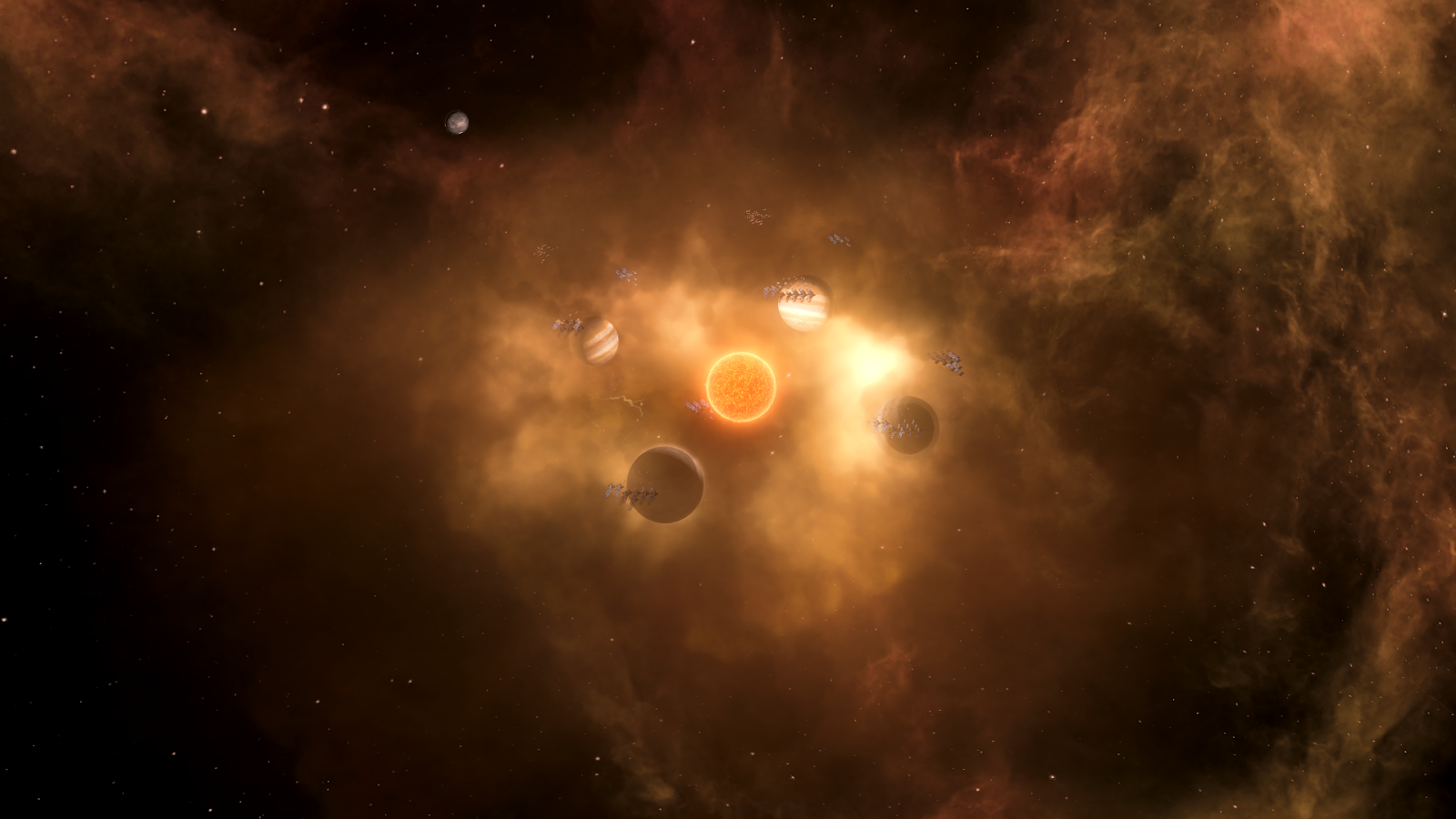 Tiyana Vek, in all its gaseous glory.​
The tiyanki themselves have also been updated, and there are now hatchlings in addition to the previously existing Bulls, Cows and Calves. The roaming tiyanki fleets are now also a bit more randomized in their compositions. 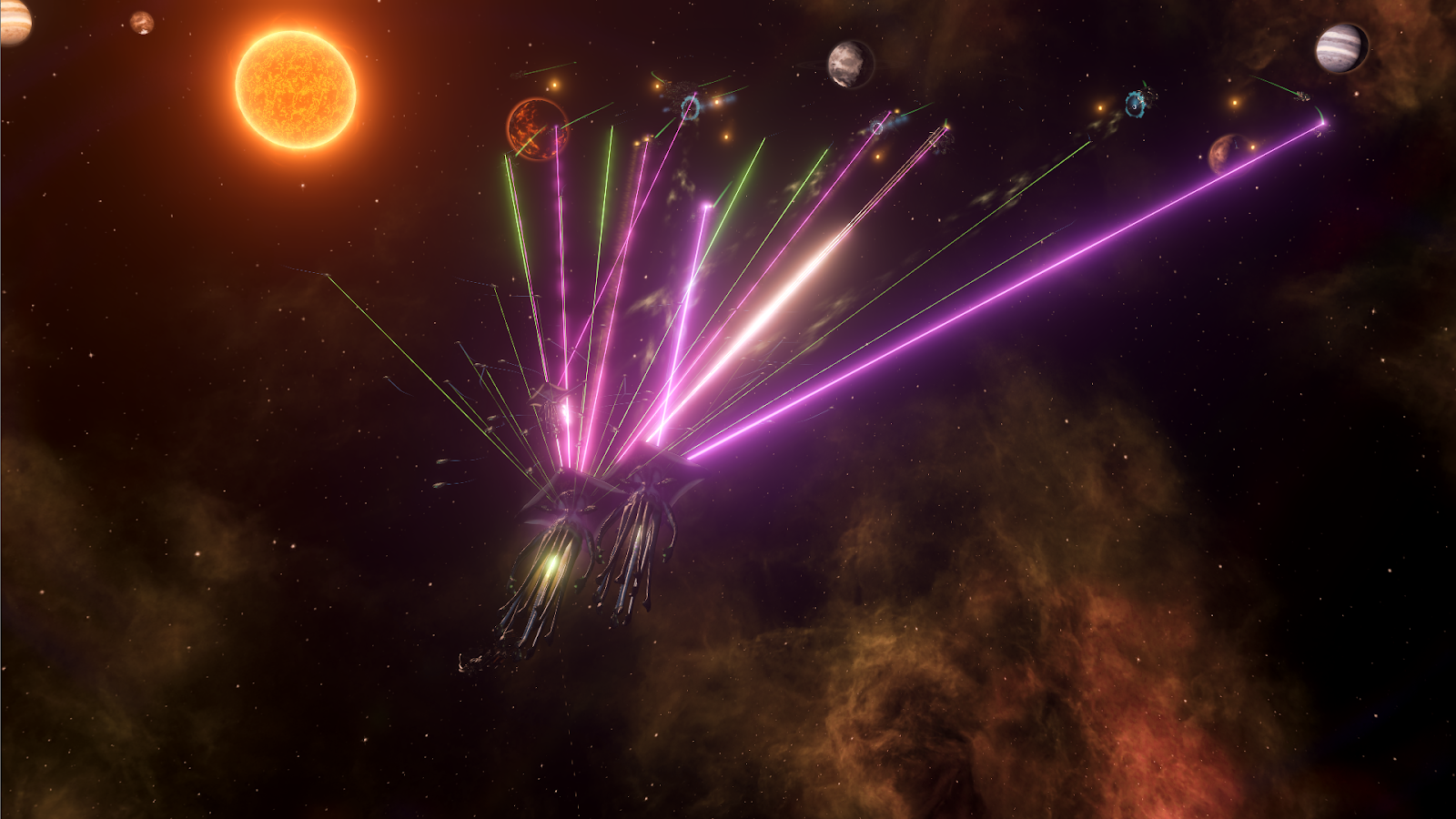 Space whaling.​
Hunting the tiyanki will yield energy credits and exotic gas, but xenophile empires will not approve. 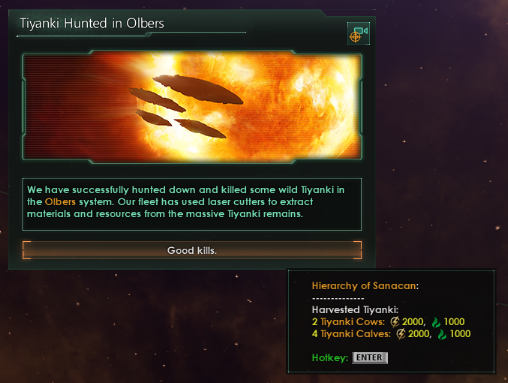 Successful hunt. No, bounty numbers are not final.
​
Space Amoebas
Similar to the Tiyanki, the space amoebas now also have a home system from which they can spawn. The space amoebas spawning behaviour is slightly different from the space whales. The amoebas that spawn in the home system will have a cooldown, but may occasionally leave their system in large numbers and seek a new home. 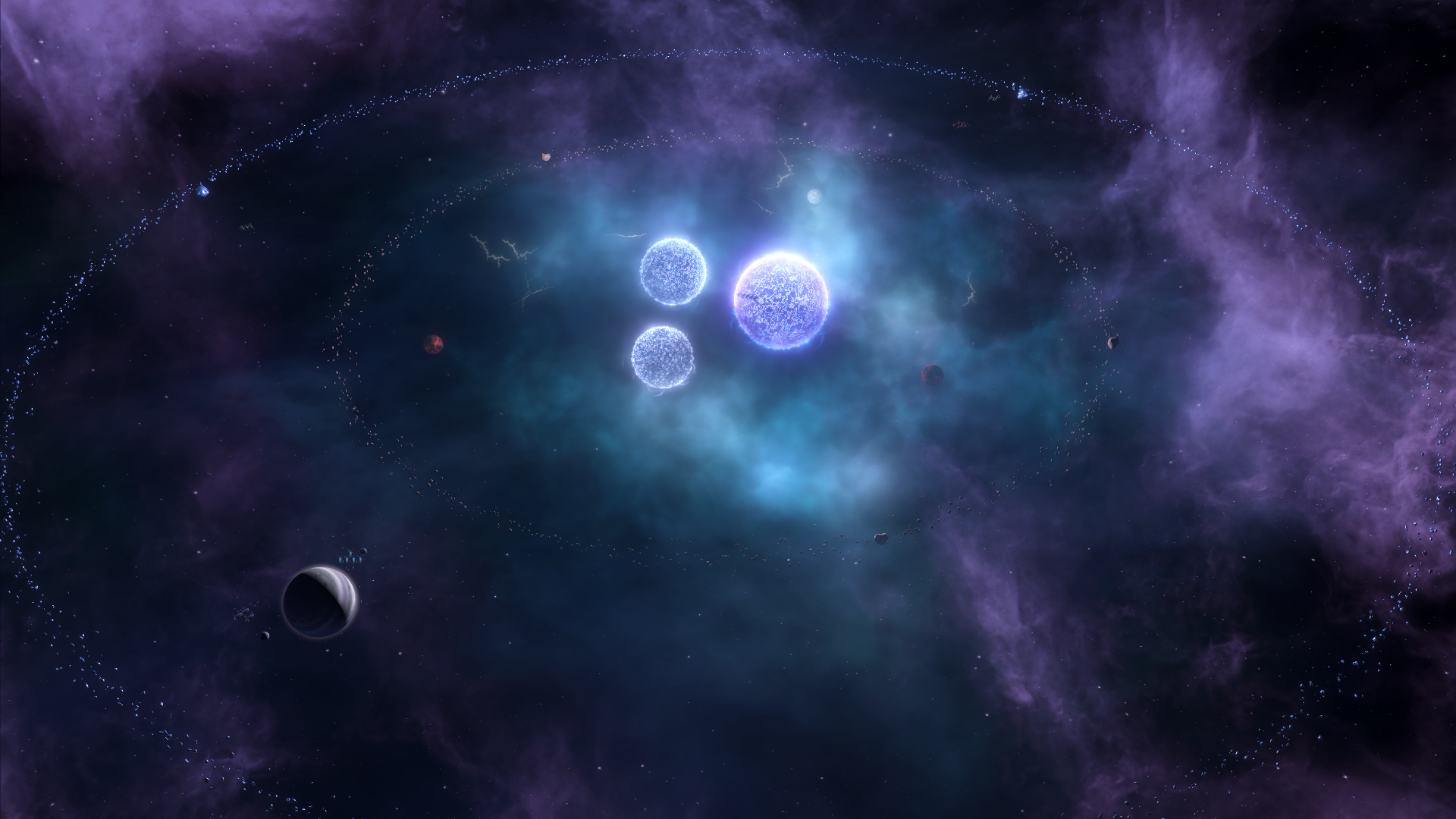 Behold! Amor Alveo, home of the amoebas.
​
As before, it's possible to complete the Amoeba Pacification Project to turn them non-hostile if you are a xenophile or pacifist empire. If you have pacified the space amoebas, it's possible for some of them to spawn in your territory. These amoebas will be friendly towards you, but perhaps not to your enemies!

Galactic Community
As we showed last week, there will also be a few new resolutions that allow you to decide how the galaxy should feel about the tiyanki.

With the Tiyanki Conservation Act, an empire that kills a tiyanki will become in Breach of Galactic Law.

With the Tiyanki Pest Control, an empire will be in Breach of Galactic Law while they are harboring any Tiyanki within their borders.

We’re also working on a resolution for pacifying amoebas, which you can propose if you have already pacified them. Empires will get a choice whether or not they will agree to pacifying the amoebas, which will share pacification if they agree.

These are the first steps we’re taking towards reinvigorating the galaxy a bit. We’ll give you more information in the next couple of weeks, so stay tuned for future dev diaries!
Last edited: Apr 7, 2020
Reactions:

Will there be conservation idea for other space fauna like void clouds (which spiritualists might be interested in if the whole "conduits of the divine" thing is any indicaiton)?
Toggle signature
"There is no such thing as an unbiased argument - indeed, facts support bias', or else they wouldn't exist." - Grand Historian

Will the home systems for mining drones, void clouds and crystals also spawn new ones over time?

What if you can't do or don't have access to the Pacification project? Does the resolution passing grant access to it provided your ethics/civics don't prohibit it?
Toggle signature
Pssst hey kid, you want some DLCs? First one's free

Looks good I really hope as part of making the galaxy feel more alive we could have some cosmetic indications of civilian starships travelling to-and-from systems, planets, starbases etc. Is this something that would be possible as just a visual without tanking performance?

Ooh, looks like this is a first step towards void ecologies. Imagine if there were more minor ones like asteroid critters that helped with mining and gave society. Or habitable bubbles you could colonize and study. Things like the tree could be expanded too. And it'd be nice if there were more neutral space creatures.
And for the more militarist/genetics inclined, breeding them for their fleet.

Also, it looks like the art is getting a bit of a revamp!

All in all, looking forward to these changes
Toggle signature
The universe is probably littered with the one-planet graves of cultures which made the sensible economic decision that there's no good reason to go into space - each discovered, studied, and remembered by the ones who made the irrational decision. - Randall Munroe
Two possibilities exist: Either we are alone in the Universe or we are not. Both are equally terrifying. - Arthur C. Clarke.

yeah, i would love to see updates to space fauna...

Very interesting. More resolutions and a reason to use these resolutions is a nice way to update existing content.


grekulf said:
These are the first steps we’re taking towards reinvigorating the galaxy a bit. We’ll give you more information in the next couple of weeks, so stay tuned for future dev diaries!
Click to expand...

I have a question regarding more resolutions. While advertising the Federations DLC and the Galactic Community, we were told that the GC would be a blank sheet but for Politics and Culture, I miss some opposite resolutions. So far the only resolution is "The great good" and sanctions which heavily pushes and egalitarian playstyle. We miss a resolution for pushing more authoritarian and Xenophobe playstyles.

This is what I would recommend: A resolution which favours your own starting species over other xenos at varying degrees and/or pushes an authoritarian playstyle. As the resolutions get more strict, living conditions such as "Full citizenship" are banned for non-Starting species. Half-species from Xeno-Compatibility are also not allowed to have full Citizenship. Even more strict: All non-starting population must be enslaved or assimilated, so empires with no slavery possibilities are in breach of galactic law. Bonuses should be increased slave and worker output and reduced slave and worker political power etc. There would also be less (or none) opinion penalty for purging a species. Because who would want to pollute their empire with other species anyway? Another nice resolution would be to prohibit leaders from non-starting species and give leader experience to rulers from your starting race. Especially fitting for the Authoritarian faction.

since you're already working on it, can you also add the decision to pacify amoebas (and crystals) to civs with the "environmentalist" civic? that would seem fitting.
T

This looks like a pretty nice addition, especially if it gets fully fleshed out. If the same applies to Crystal Entities (as they're basically Lithoid Amoebas) then even better.

I could see things like this adding some decent tidbits to all parts of the game, which is a plus for everyone really.

Any news on bug fixes and QoL updates?

Those feel a much higher priority than activities involving space whales to me.

I was wondering if the game will finally support native 2K resolution and scaling in the next version. It's very painful to play with everything blurry... For now, we have to use the mod scale_ui (https://steamcommunity.com/sharedfiles/filedetails/?id=1906038494)...

It would be cool if you could designate systems as preserves for space fauna.

I hope one day we'll be able to cultivate, breed, or perhaps even genetically engineer space fauna for our own navies. Organic navies are a sci-fi mainstay after all. Seems like a potential ascension path to me!

I hope one day we'll be able to cultivate, breed, or perhaps even genetically engineer space fauna for our own navies. Organic navies are a sci-fi mainstay after all. Seems like a potential ascension path to me!
Click to expand...

It would fit in biological as an option. Same with other kinds of biotech beyond gene modding your species.
Last edited: Apr 5, 2020
Toggle signature
The universe is probably littered with the one-planet graves of cultures which made the sensible economic decision that there's no good reason to go into space - each discovered, studied, and remembered by the ones who made the irrational decision. - Randall Munroe
Two possibilities exist: Either we are alone in the Universe or we are not. Both are equally terrifying. - Arthur C. Clarke.

i'd like there to be great migrations of species. perhaps between systems or perhaps intergalactic ones
M