Jump to latest Follow Reply
Menu
Install the app
You are using an out of date browser. It may not display this or other websites correctly.
You should upgrade or use an alternative browser.
Stellaris 44290 Bug Reports 24046 Suggestions 14152 Tech Support 2313 Multiplayer 341 User Mods 4232 Stellaris AAR (After Action Reports) Console edition 1021
Previous dev diary Next dev diary
Show only dev responses

Today we will be talking about a new feature coming with Stellaris: Federations – the Galactic Community!

The Galactic Community is very similar to a United Nations in space. Members can propose and vote on Resolutions, which are laws that affect all the member empires.

Resolutions
The Resolutions are intended to be divisive, so that even empires that are allies can have very different agendas when it comes to which Resolutions should be passed.

Resolutions exist in categories and have a couple of steps in each category.​ 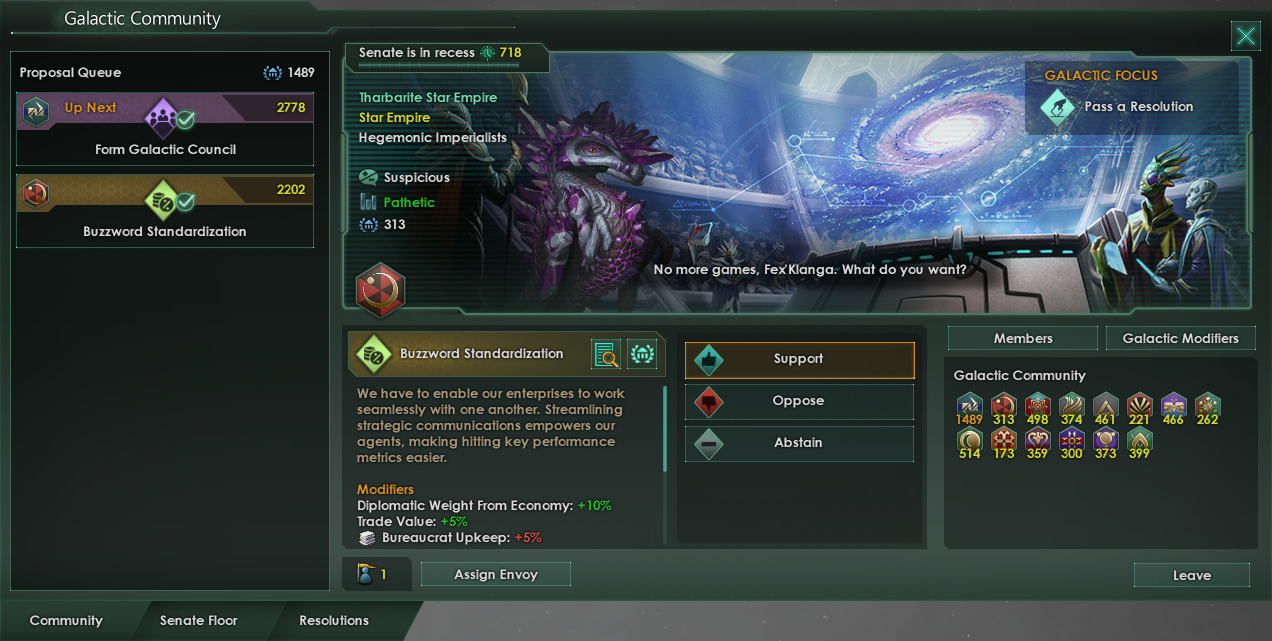 The Galactic Community dealing with matters of critical importance to the continued well-being of the galaxy and all of its inhabitants.​
Only one Resolution can be voted on at a time on the senate floor, and the proposal that moves into session next will be the proposed Resolution with the highest amount of Diplomatic Weight supporting it. 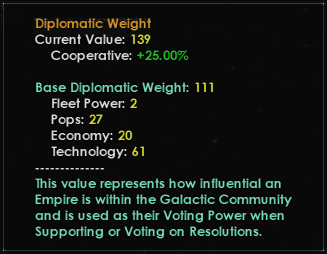 So as you can see, there are many different ways to make yourself more influential on a diplomatic, galactic stage!

Favors
For Resolutions, empires have the possibility to call in favors to strengthen their votes. An empire can owe another empire up to 10 favors, and each favor is worth 10% diplomatic weight. For example, if an empire calls in 10 favors, they can add 100% of the other empire’s diplomatic weight to theirs. Calling in favors this way will only affect votes on Resolutions. This also means that favors will work the same between player empires as it will between player and AI empires. 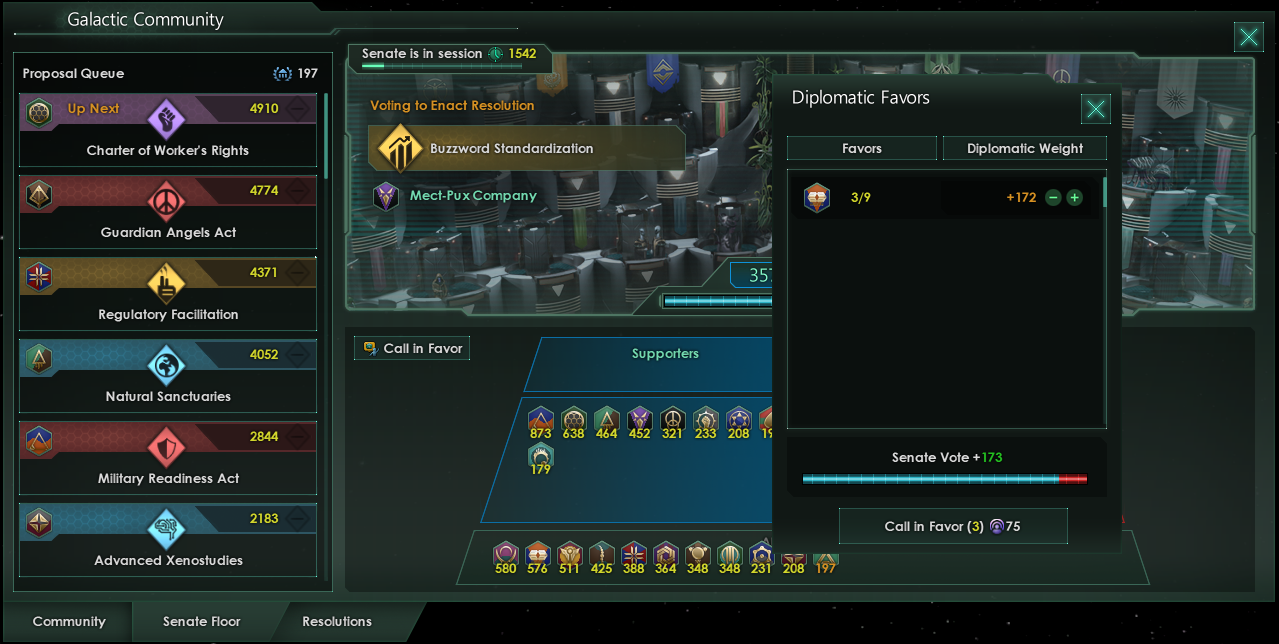 Calling in favors costs Influence.​
Favors can also be used to increase the likelihood of AI empires accepting diplomatic deals.

Favors can be traded through the trade diplomatic action.

The Galactic Council also gets access to special powers such as veto rights or emergency measures.

Veto rights allows a council member to veto a Resolution that is currently in the proposal queue.

While the galactic senate is in recess it is possible for Galactic Council members to declare a proposed Resolution an emergency. This will immediately put the senate into session and will initiate a vote on the emergency Resolution.

There will be Resolutions to declare the galactic invaders a threat to the galaxy, which means it will be against galactic law to have closed borders to any other Galactic Community member while the crisis is ongoing.

It is possible to join the Galactic Community (and to see it!) as soon as you have established communications with any member of it.

Leaving the galaxy community is something an empire might choose to do if they become the target of too many sanctions or if there are too many Resolutions that negatively impact them.

Next week we will be showing all the Origins!
Reactions:

When will you be detailing the contents of the free patch?
F

Is all of this part of the DLC, or will some of it be free?
Toggle signature
My stupidly long idea on how Nomadic Empires in Stellaris might work.

I'm thrilled to hear that membership is optional! Even though I'm personally probably always gonna be a member.

grekulf said:
By default, the council will have 3 members, but the number can be changed through Resolutions.
Click to expand...

One technology-hogging xenophile diplomat, one spymaster slimy lizard and one humorless militarist that likes to dismiss others' claims?
Reactions:

Can Empires with limited to no diplomacy (Exterminators, Inward Perfection) join the Galatic Senate (of the Republic)?
Toggle signature
Dr. Klen'Moral Observations on the effects of isolation on Hive-Minded drones - A Stellaris scientific report

Don't you love it when you're looking to see if the weekly Dev Diary is out yet and it appears on your second refresh ?

That's a very good news. "Bare bones" wouldn't even begin to describe the current state of the Galactic Market. Good to know it hasn't been forgotten.
Here's to hope for more fleshing out.
Toggle signature
Uh ?

I love the concept of Buzzword Standardization.
I

So what does breaking the galactic law do?

LeSingeAffame said:
Can Empires with limited to no diplomacy (Exterminators, Inward Perfection) join the Galatic Senate (of the Republic)?
Click to expand...

Don't think so, it wouldn't make much sense when their entire build philosophy revolves around them NOT doing diplomacy with other empires to begin with.

I do hope they gain some form of compensation or some other mechanics to make up for it, though.
Toggle signature
Uh ?

Is it possible to call in favours to ask someone to vote against their own proposal? (Should it be?)
Toggle signature
"There is no such thing as an unbiased argument - indeed, facts support bias', or else they wouldn't exist." - Grand Historian

Will voting (whether Oppose, Support or Abstain) on particular resolutions affect other empire's opinion's of you? Can I cozy up to a Militarist that's threatening me by supporting resolutions they are likely to approve of? Likewise, will I need to consider that threat when voting to Oppose something (ie. maybe just Abstain instead to not anger them)?
O

Recess appears to last 720 days.
A session appears to be about 1800 days.
A resolution every 7 years. Non-final numbers, or is that the ballpark time frame the team is happy with?

How are favors generated in the first place?
Toggle signature
Some high-concept Stellaris suggestions
Make leaders something more than stat modifiers.
Unify diplomatic interactions under a single paradigm.

So will you establish communication with every member of the Galatic Community the moment you join it? I'm sorry, but it seems that you haven't mentioned it.
S

grekulf said:
By default, the council will have 3 members, but the number can be changed through Resolutions.​
Click to expand...

Can the council have 1 member?

Sorry from my bad english.
Toggle signature
Googel translator is my friend.

grekulf said:
By default, the council will have 3 members
Click to expand...

Shouldn't this number be a bit flexible, depending on galaxy size and numbers of empires in the senate? Like, having 3 out of 8 empires is very different than 3 out of 30.

Kind of similar story than the hardcoded number of caraveneer fleets, that knock on your door every other year in small galaxies vs you never see them on huge.
Toggle signature
#FreeHongKong
#FreeTibet
#WinnieThePoo

Will the Galactic Community had a physical location that can be destroyed by a 3rd party? Similar to how the Galactic Market has it's hub (which gives the holder a bonus.)