Jump to latest Follow Reply
Menu
Install the app
You are using an out of date browser. It may not display this or other websites correctly.
You should upgrade or use an alternative browser.
Stellaris 47722 Bug Reports 27884 Suggestions 17154 Tech Support 2649 Multiplayer 363 User Mods 4458 Stellaris AAR (After Action Reports) Console edition 1140

Summer vacations are reaching their end and most of the team is back as of last week. Work has started again and we're really excited for what we have in store for the rest of the year.

While most of us have been away during most of the summer, we’ve also had some people who worked during July. July is a very good time to try out different designs and concepts that we might not otherwise have time to do, and today we thought it might be fun for you to see some of the experiments we ran during that period of hiatus.

Although we learned some useful insights, these experiments didn’t end up being good enough to make a reality.

Industrial Districts
As I have mentioned earlier, I have wanted to find a better solution for how we handle the production of alloys and consumer goods. I often felt like the experience of developing a planet felt better with an Ecumenopolis rather than with a regular planet. I think a lot of it had to do with their unique districts and that it feels better to get the jobs from constructing districts rather than buildings. Not necessarily as an emotion reaction to the choice, but rather that the choice perhaps feels more “pure” or simple.

An experiment I wanted to run was to see if it was possible to add an industrial district that provided Laborer jobs, instead of having buildings for Metallurgists and Artisans. Laborers would produce both alloys and consumer goods but could be shifted towards producing more of either.

This meant we added a 5th district, the Industrial District. By adding another district we also needed to reduce the number of building slots available. Since there would be no more need for buildings that produced alloys and consumer goods, this should still end up being similar. 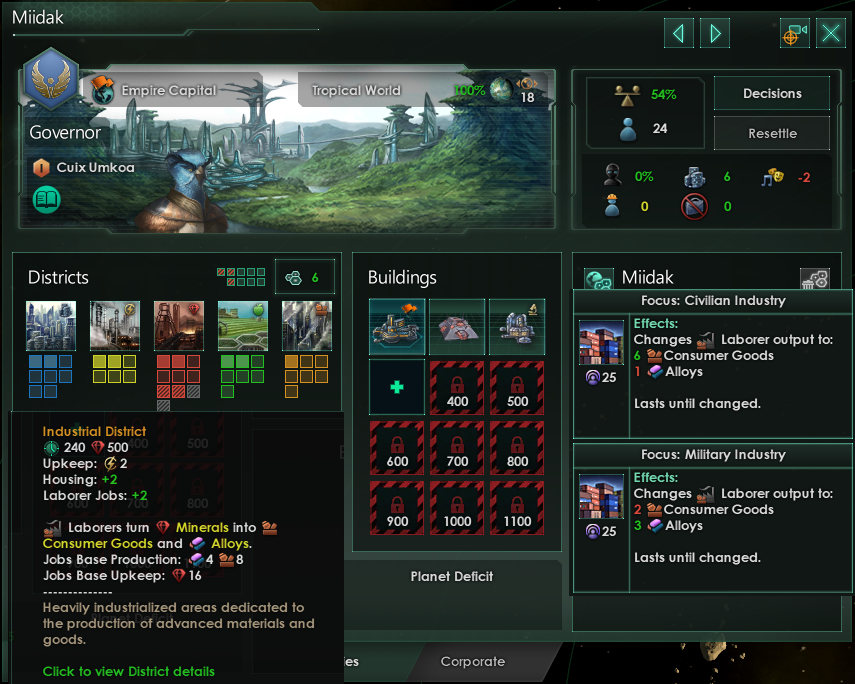 A Laborer would consume 8 minerals to produce 2 alloys and 4 consumer goods, and that amount could be modified in either direction by passing a Decision. What I wanted was to have an industry that could have a military and civilian output, and where you could adjust the values between these outputs.

Having a laborer job that generates an “industrial output”, which could be translated into either alloys or consumer goods did feel good, but the specific solution we used didn’t feel quite right.

Another experiment was to see how it felt if city districts unlock building slots instead of pops. This experiment didn’t have a specific problem or issue it was trying to address but rather it was to investigate how that would feel and work. It was interesting but ultimately it felt less fun than the current implementation. It would have needed more time to see if it could be made to work.
​ 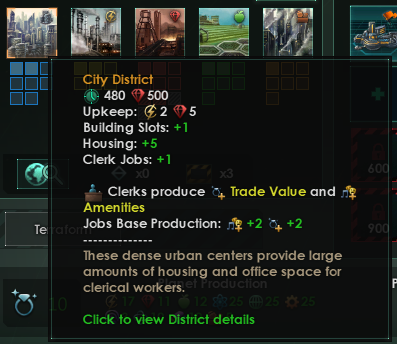 This experiment did include increasing the number of jobs you would get for the building, so a research lab would provide 3 jobs instead of 2.

City District Jobs from Buildings
At the same time, we also tried a version where buildings applied jobs to city districts instead of providing jobs by themselves. One upside would be that you’d need less micromanagement to get the jobs, but the downside is that it would also be quite a large upswing in new jobs whenever you built a city district. In the end, it felt like you had less control and understanding of what a planet was specializing in.

Summary
Although these experiments were interesting, they didn’t end up quite where we wanted to, so they never became more than just experiments. We did learn some interesting things though, which we will keep in mind for the future. The industrial districts are still something I want to keep looking into, but we have to find a better solution.

Dev diaries will now be back on a regular schedule, but we will be looking into changing the format a bit this time around. For now, dev diaries will be coming bi-weekly, which means we will be back again in another 2 weeks with a similar topic.
Reactions:

You say "similar" topic - what does that mean exactly? Does it mean we won't get to hear about what's being worked on?

A_Dane said:
You say "similar" topic - what does that mean exactly? Does it mean we won't get to hear about what's being worked on?
Click to expand...

Biweekly generally means every 2 weeks, and bimonthly every 2 months. However, since the usage isn't standardized both can be confusing.
Toggle signature
I sometimes stream achievement runs and stuff.

Do Devs intend to look into a deeper gameplay overhaul (diplomacy, warfare rework, agent characters/espionage/black ops missions) or such drastic re-development is out of the scope for the future plans?
Toggle signature
The latest your local wormhole timetable is available here: www.facebook.com/stellarisandbeyond

MaXimillion said:
Biweekly generally means every 2 weeks, and bimonthly every 2 months. However, since the usage isn't standardized both can be confusing.
Click to expand...

Biweekly can also mean "twice a week", hence even more confusion. Fortnightly might be be better as it is non-ambiguous

Any experiments regarding late game performance or AI management?
Toggle signature
Check out my Stellaris mods!

Industrial districts would have been great, I often just create city worlds to better organize my alloy/consumer goods production.

Have you thought about an additional experiment in the lines of dropping buildings in favor of districts entirely?

I would be really excited if a system where building slots are determined by something other than pop-number would eventually make it into the game. Currently, most non-upgraded buildings provide less than 5 jobs, so in order to avoid unemployment in the early game, you *have* to construct rural districts, even if you are already swimming in every basic resource there is.

Could have used the much more elegant fortnight.
Though to most people these days, they will think of a game rather than fourteen nights.

Good to see experimentation, looking forward to what you do next.

droidorat said:
Are Devs intend to look into a deeper gameplay overhaul (diplomacy, warfare rework, agent characters/espionage/black ops missions) or such drastic re-development is out of the scope for the future plans?
Click to expand...

I think a better integration of the existing gameplay elements with each other should take precedence over yet another overhaul. As it stands now, every gameplay element stands for it self, but there's not much interaction with other elements.

droidorat said:
Do Devs intend to look into a deeper gameplay overhaul (diplomacy, warfare rework, agent characters/espionage/black ops missions) or such drastic re-development is out of the scope for the future plans?
Click to expand...

Yes, I outlined some thoughts in Dev Diary #141


Morell said:
Have you thought about an additional experiment in the lines of dropping buildings in favor of districts entirely?
Click to expand...

I have thought about it, for sure, but I think the buildings add a lot of flavor with their art. It's a delicate balance.
Toggle signature
Follow me on Twitter.

Not over the summer, no. Most programmers were away. AI and performance are two constantly ongoing challenges.
Toggle signature
Follow me on Twitter.

Its really nice to see that you guys are trying out new things with existing mechanics to see what else can be done be they for better or worse. I look forward to your next innovations
Toggle signature
Hearts of Iron 4: Minimalist Mod

grekulf said:
I have thought about it, for sure, but I think the buildings add a lot of flavor with their art. It's a delicate balance.
Click to expand...

Well, I can only speak for myself, but I'd take better gameplay and easier handling, over flavor, anytime.

The buildings are nice, but virtually having two different building systems, feels kinda illogical for me. On the one side I just order districts, but on the other side, I order a specific building, every 500k citizens my colony gains. This feels like someone wanted to combine two different, but largely oposite, colony management systems. And I have to say, while it certainly is an improvement from the tile system, it still doesn't feel "right".