Jump to latest Follow Reply
Menu
Install the app
You are using an out of date browser. It may not display this or other websites correctly.
You should upgrade or use an alternative browser.
Stellaris 46892 Bug Reports 27023 Suggestions 16440 Tech Support 2588 Multiplayer 358 User Mods 4419 Stellaris AAR (After Action Reports) Console edition 1124
Previous dev diary Next dev diary
Show only dev responses

Hi everyone, this is Moah. I’m the tech lead on Stellaris and today I’m here to talk about the free 2.3 "Wolfe" update that will be arriving together with Ancient Relics, and what it brings to the table in terms of tech.

Stellaris is going 64 bits.
People have been clamoring for this for a while now, and various factors have led us to finally do this for this patch. I should temper your expectations though: while many have claimed that this would be a miracle cure for all their issues with Stellaris, the reality is somewhat more tame.

What does it mean?
The one solid benefit is that Stellaris is no longer limited to 4gb of memory, and won’t crash anymore in situations where it was reaching that limit. For people who play on huge galaxies, with many empires, many mods or well into 3000s, this will be a boon.

Finally, the last effect of switching to 64 bits is that the game will no longer playable on 32 bits computers or OSes. We don’t think this will affect many people, but there you have it.


What about Performance?
I know that’s everyone’s favourite question, so let’s do our best to talk about it. First, let me dispel some notions floating around in various forums: Stellaris does use multithreading, and we’re always on the lookout for new things to thread. In fact between 2.2.0 and 2.2.7, a huge effort was made to thread jobs and pops, and it’s one of the main drivers of performance improvement between these version.

Pops and jobs are indeed what’s consuming most of our CPU time nowadays. We’ve improved on that by reducing the amount of jobs each pop evaluate. We’ve also found other areas where we were doing too much work, and cut on:
Why do these seemingly pointless things happen? Well, we generally focus on getting gameplay up and working quickly so that our content designers can iterate quickly, and sometimes things fall through the cracks. Some of these systems are also quite complex and the scale of the new code is not so easily apparent. Sometimes, not limiting the number of targets is good enough because you’re not doing much but then, months later, someone adds more calculations or the number of objects explodes for unrelated reasons, and suddenly you’ve got a performance issue.

“Why don’t you just compute jobs when a new one appears?” has often been asked around these parts. Well, a short answer to that is it’s really hard to know when a new job appears. You can get jobs from any modifier to: country, planet, pops. Each of these can get modifiers from ethics, traditions, perks, events, buildings, jobs, country, planets, pop, technology, etc.

Until now we were trying to calculate modifiers manually, forced to follow the chain in its entirety: when you recompute a country modifier, you then calculate their planets modifiers, and then each planet would recalculate their pops modifiers. Some of our freezes were just that tangled ball of yarn trying to sort itself out. 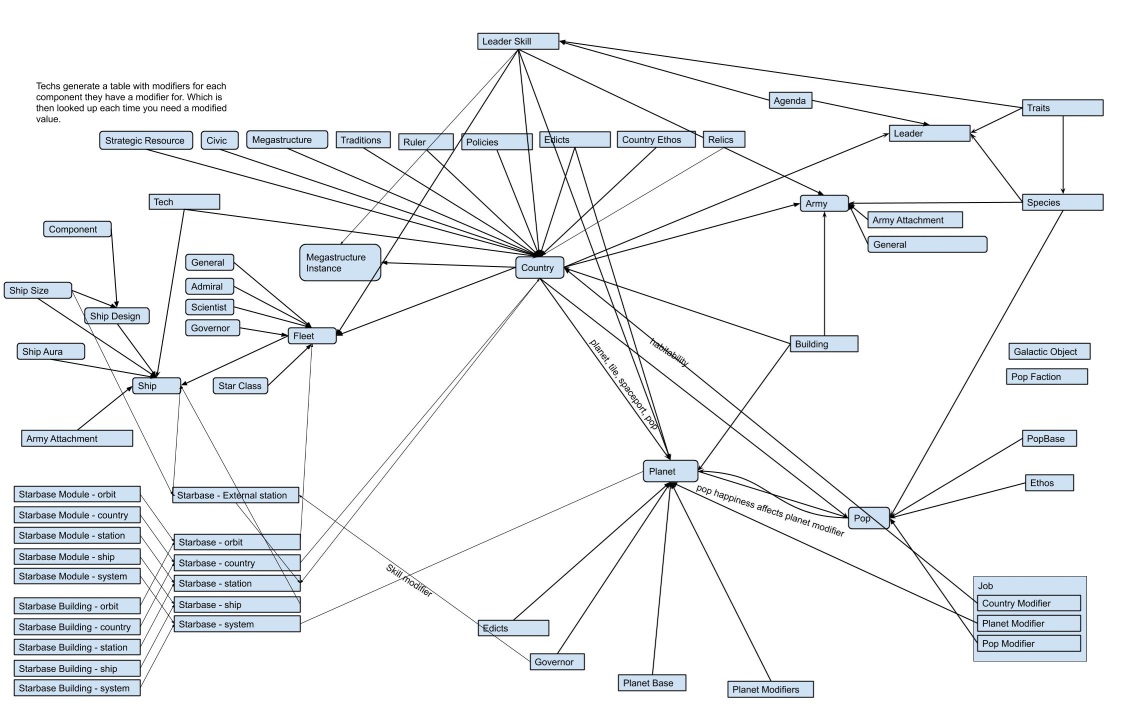 This is our modifier flow charts. It’s not quite up to date, but gives you an idea of the complexity of the system (Unpolished because it’s a dev tool, and not made for the article).

No More!
For 2.3 “Wolfe” we have switched to a system of modifier nodes, where each node register what node they follow, and is recalculated when used, following the chain itself. We have modifiers that are more up to date, and calculated only when needed. This also reduces the number of pointless recalculations.

This system has shown remarkable promise, and cut the number of “big freezes” happening around the game (notably after loading, for example). It has some issues, but as we continue working with it, it’ll get better and help both with performance and our programmers’ sanity.

So, what’s the verdict?
In our tests, 2.3 “Wolfe” is between 10% and 30% faster than 2.2.7 right now. Hopefully it’ll stay that way until release, but the nature of the beast is that some of these optimizations break things and fixing the issues negate them, so we can’t promise anything. 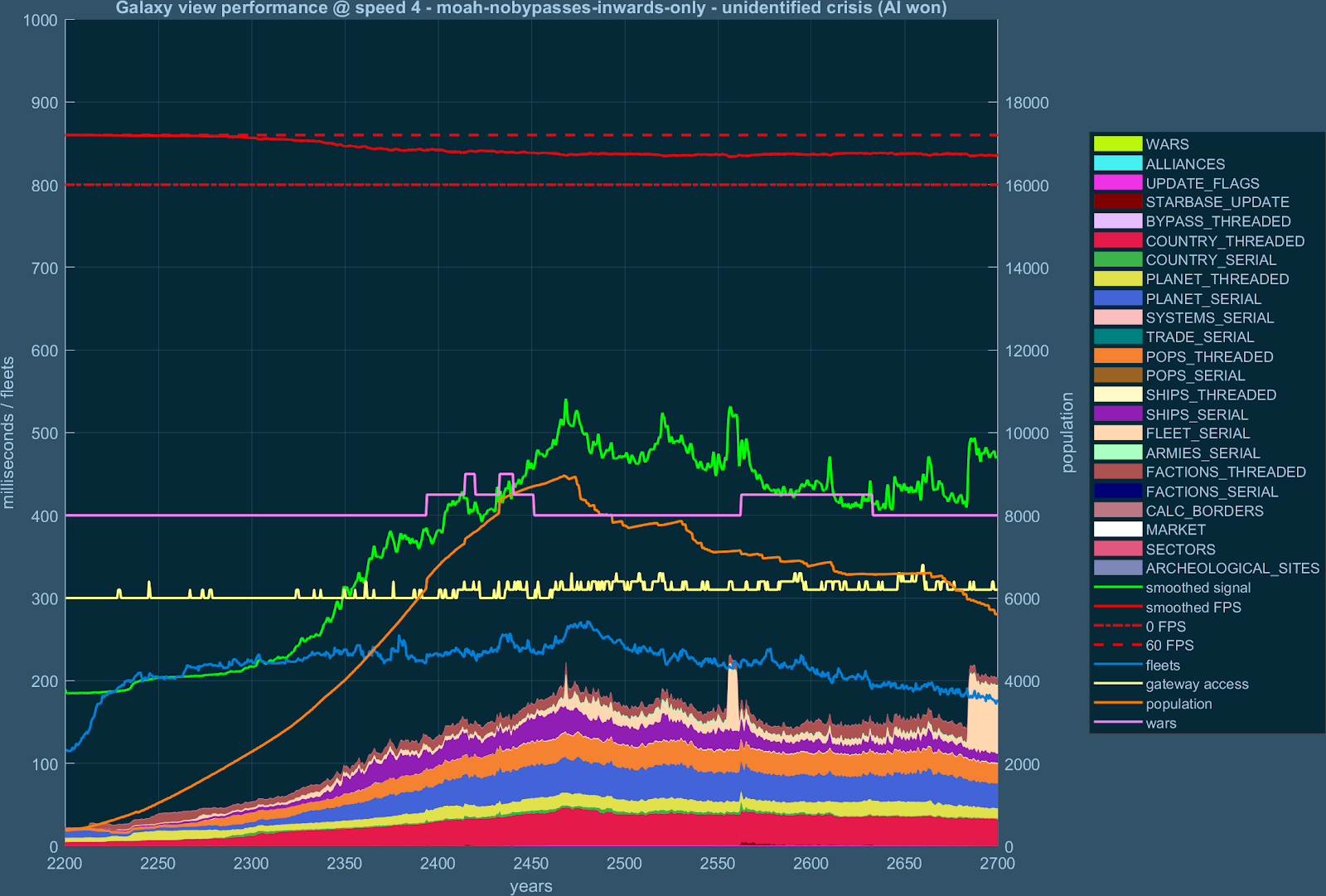 Measurements provided by @sabrenity , using detailed info from the beta build. It’s worth noting the “SHIPS_SERIAL” purple line has since been eliminated.

AI
Another forum favorite, we have done some improvements to the AI. First, with @Glavius ’s permission, we’ve used his job weights to improve general AI job distribution. We’ve also done the usual pass of polish and improvements, and of course taught the AI how to use all our new features.


What else is new?
We’re also getting a new crash reporter that will send your crash report as soon as they happen rather than next time you start the game. We’ve improved our non-steam network stack for connectivity issues, etc.


All right, enough of my yammering. This has turned into a GRRM length novel, and even though there are many more areas we could cover, we’ll just turn this for your perusal.
Last edited: May 24, 2019
Reactions:

Moah said:
This has turned into a GRRM length novel
Click to expand...

If you guys could give him a hand in optimising his performance issues, I'm sure a lot of folk would be mighty grateful!
Toggle signature
if you don't advertise your radical [RANDBETWEEN(left | right)]-wing political leaning in your sig, are you really a paradoxian?
T

All of this looks great, i really hope for it to works as you say. My computer is not exactly state of the art, so any performance improvement is welcome.

Thanks for addressing this issues


Moah said:
We don’t think this will affect many people, but there you have it.
Click to expand...

It will affect more people than you think.
Toggle signature
Still waiting for Runemaster

Many A True Nerd

That's a sexy graph right there.

Ridixo said:
It will affect more people than you think.
Click to expand...

Our stats show less than 1% of users are still on 32 bit systems. The intent is never to abandon anyone, but ultimately tech needs to move on to allow further development, and our other option was to abandon all Mac users, period. That is not going to be done.
Toggle signature
Sometimes I play games on Twitch and talk about them.

Looking good, I guess there was gonna be a performance DD!
I usually play on medium galaxies, so this looks like it'll be a nice improvement for me.
Can't wait for next week!!
Toggle signature
The universe is probably littered with the one-planet graves of cultures which made the sensible economic decision that there's no good reason to go into space - each discovered, studied, and remembered by the ones who made the irrational decision. - Randall Munroe
Two possibilities exist: Either we are alone in the Universe or we are not. Both are equally terrifying. - Arthur C. Clarke.

When is the patch and dlc set to Launch?
Toggle signature

Appreciate the efforts. Looking forward to it when ever it comes.
Cheers.

Ridixo said:
It will affect more people than you think.
Click to expand...

The last 32-bit CPU was 17 years ago. Can those computers even run Stellaris? And there's literally no reason for anyone with a newer CPU to have a 32-bit OS. In short, anyone who's affected by this kinda deserves it.

I'm glad that optimisation is a primary focus of this patch, It'll be nice to run the game on more than 4gb of memory
Toggle signature
I'll do you one better, why is Scotland?

Really solid, looking forward to coming back to the game in 2.3!

So the AI will be much smarter now?
H

Moah said:
The one solid benefit is that Stellaris is no longer limited to 4gb of memory, and won’t crash anymore in situations where it was reaching that limit. For people who play on huge galaxies, with many empires, many mods or well into 3000s, this will be a boon.
Click to expand...

Thank god! I just had to abandon a heavily modding game in the 2400's because of this exact issue! Game crashed trying to save because of the memory limit.
Toggle signature
Team Member on Warhammer: Geheimnisnacht
CK2Plus Factions Standalone Mod [Forum, Steam]

Jamor said:
The intent is never to abandon anyone, but ultimately tech needs to move on to allow further development
Click to expand...

The move to 64 bits is the occasion to get rid of many overflow bugs that plague the game. Either by using bigger variables, or by setting caps to prevent the values to overflow and become negative.
Examples:
Weapons range overflow prevents whole fleets from firing.
Research points overflow prevents your empire from building anything.
etc.

This is an excellent DD, thank you very much for putting it together and giving the community a technical update.

苏白@夢璃花 said:
So the AI will be much smarter now?
Click to expand...

It rather would not fall into downspirals that much.
Toggle signature
Battlecruiser operational.