Jump to latest Follow Reply
Menu
Install the app
You are using an out of date browser. It may not display this or other websites correctly.
You should upgrade or use an alternative browser.
Stellaris 46660 Bug Reports 26807 Suggestions 16209 Tech Support 2571 Multiplayer 357 User Mods 4395 Stellaris AAR (After Action Reports) Console edition 1108
Previous dev diary Next dev diary
Show only dev responses

First of all I want us to celebrate that today is the 3-year anniversary of Stellaris. Stellaris is such a great game that has changed a lot since its release. Since 1.0 we’ve added Civics, Traditions, Ascension Perks, Fallen Empires, Hive Minds, Machine Empires, planet killers, starbases and much much more.

When we started developing Stellaris, I don’t think we could ever foresee what Stellaris would become this many years later. It’s really become its own thing and it’s really fun to see how many new players – many of who may never have played any of our other games, or any other strategy game for that matter – have found their way to Stellaris. Stellaris is such a great game for telling your own stories and in general just enjoying the awesomeness of space.

A big thanks to our awesome community for making this game even better!

Alright, let’s move on to talking about sectors & designations. This will be a followup to Dev Diary #142 and I will try to outline what we’ve done so far.

Designations
Previously planets would automatically assume a role depending on what was built on it. It’s now possible to set this manually, if you wish to. Having played with this myself, I must say it feels pretty great to be able to make that choice directly yourself. 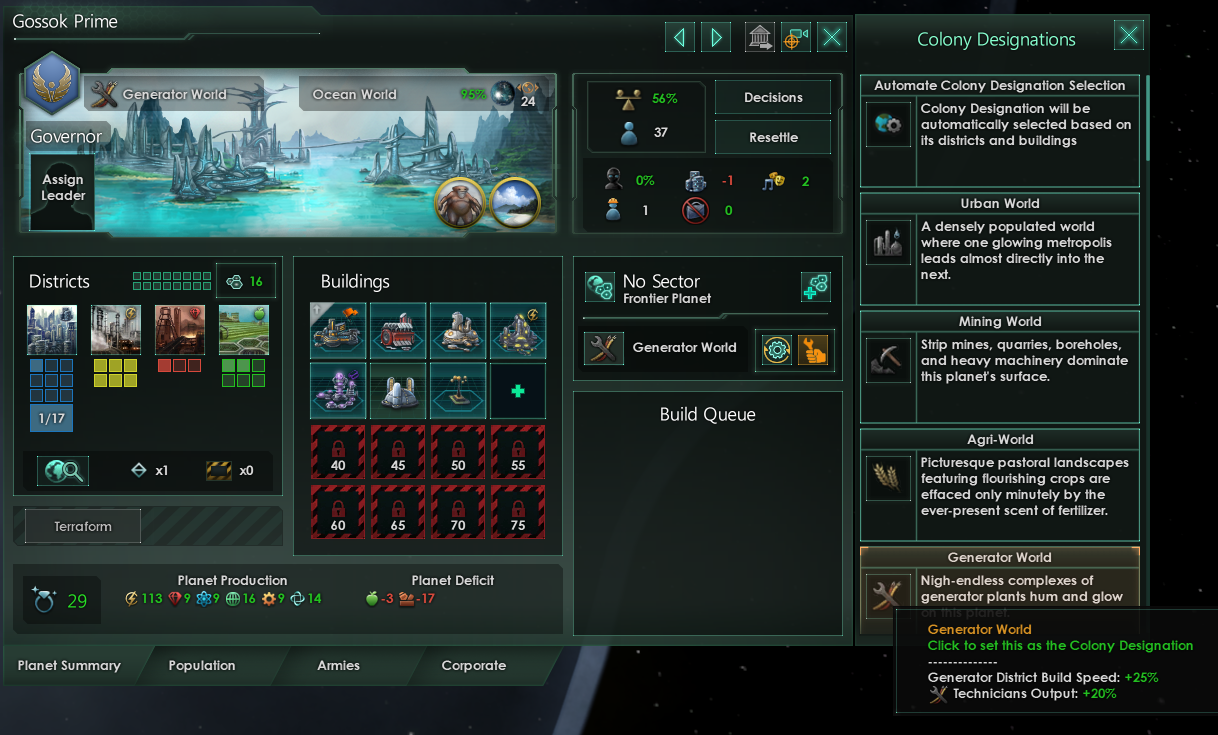 Automation
A new neat feature is that it’s now possible to decide which planets, regardless if they are in a sector or not, should be automated. Automated planets will build things according to a certain build order, which is set up per designation. For example:
This will happen every time it has less than 3 open job slots.

If crime is high this will trigger a crisis that will build a Precinct House, ignoring the normal build order.

If a building in the build order can not be build, e.g. because you lack the technology, it will be skipped.

Automation will try to use its own Sector Stockpile if possible, otherwise it will use the Shared Stockpile. You can read more about the sector stockpiles further down in the dev diary.

Because we deemed the risk to be too high right now, AI empires will not manually set designations or use the build orders. Our goal is for that to be improved in later updates, however, and when it’s had more time in the cooker we will be deploying those changes.

Sectors
In the new system, sectors will be created by making a planet a Sector Capital. This will immediately form the sector and include all systems within 4 jumps of the Sector Capital. We originally had thought to make the range 6 jumps, but we feel like 4 jumps feels better. 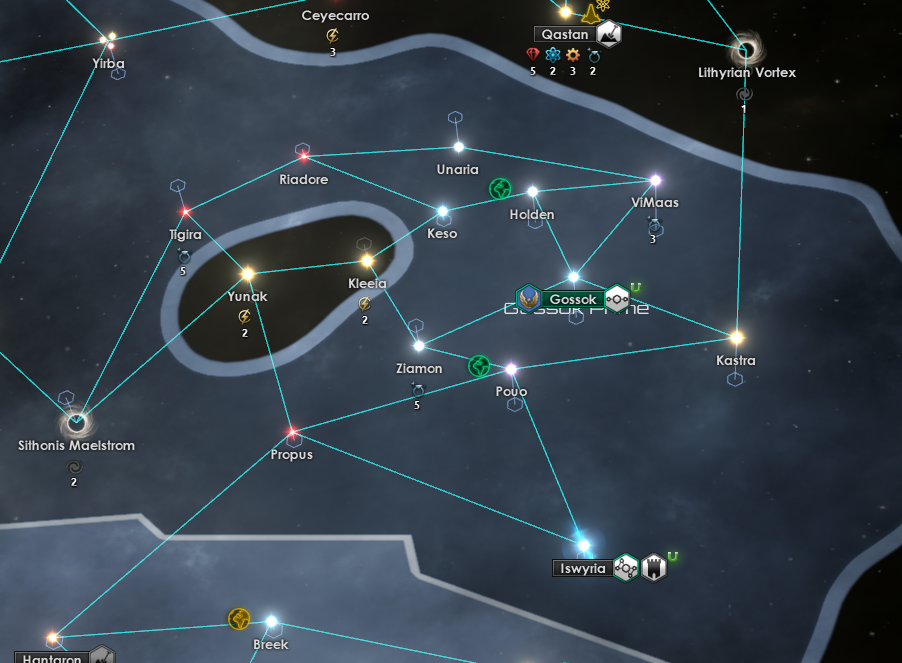 It becomes very easy to create a new sector. Simply click the flag on the galaxy to open the planet view. 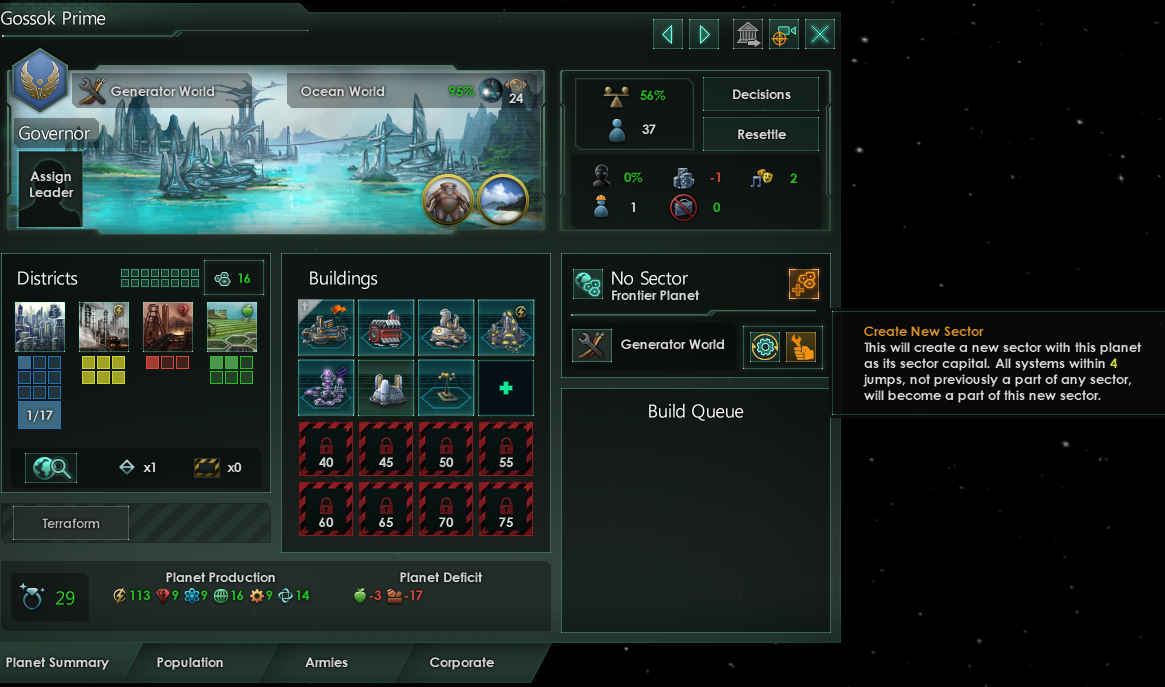 In the planet view we have a create sector button. Once clicked, it will immediately create the sector. 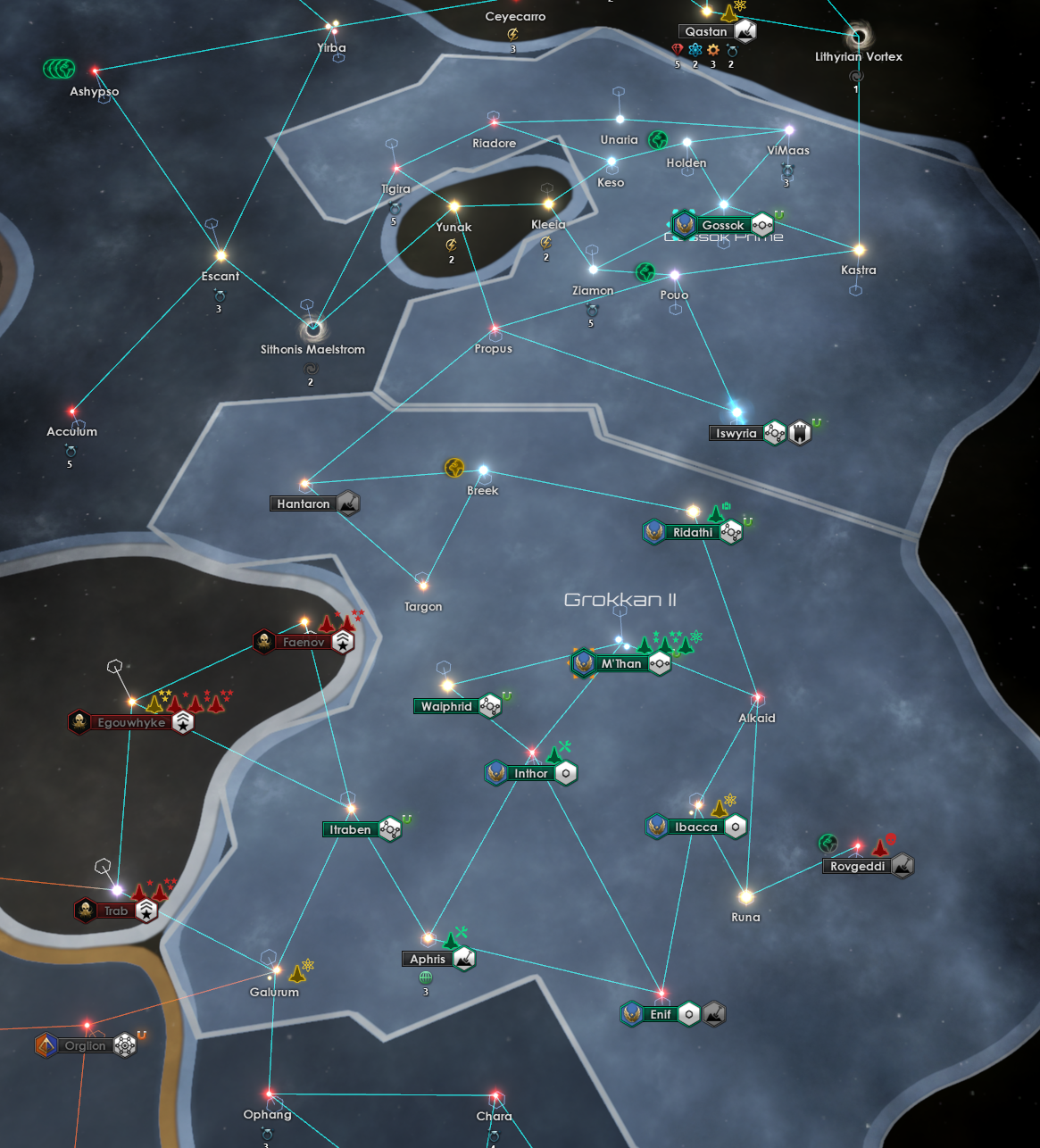 Boom! Sector created. It’s just as easy to delete the sector as it is to create a new one. The sector capital is also visible on the map with its own icon.
​
Sectors now also have a Shared Stockpile, in addition to their Local Stockpiles. It is possible to set monthly subsidies for your Shared Stockpile. This should make it a lot easier to manage larger empires. 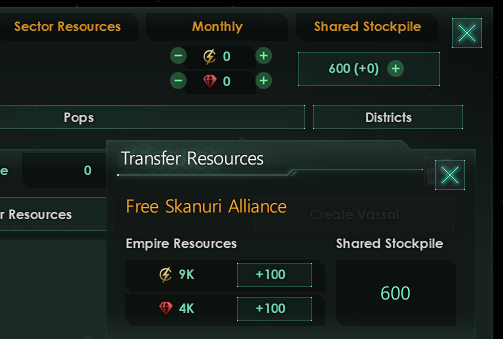 What remains to do
We didn’t want to try to do too many things at once, so we will be going with the safer option of deploying these changes in increments. These changes will not be coming in the upcoming update, but rather in the future.

Left to do:
When we’ve looked into more of these things we may want to start exploring ideas like adding more mechanics to “Frontier Space” or if we can tie faction to sectors somehow. Those are only some thoughts we’ve had though, and it's too early to say if that will come to fruition or not.

Thanks again to all of our community, and let’s look forward to the next 3 years!
Last edited: May 9, 2019
Reactions:

So glad sectors are being addressed. Will we be able to manually adjust sector boarders to add/remove planets to them as needed (I.e so that nearby core systems aren’t grabbed), and will sectors draw the resources mined in their systems into their stockpile? If so will a form of sector tax be returning?

Can’t wait to see the game after 3 more years

I like it! Looks like creating sectors will be a much quicker process than in 2.1 but more orderly than currently.

This is so good! When is this DLC targeted for release? @grekulf
Toggle signature
Pssst hey kid, you want some DLCs? First one's free

Looks great so far!! I assume the remaining changes will be in future updates as you refine what you have?

And I can't wait to be able to automate my planets! How much control will I have over it? i.e. directing which districts/buildings are built in order and such?
Toggle signature
The universe is probably littered with the one-planet graves of cultures which made the sensible economic decision that there's no good reason to go into space - each discovered, studied, and remembered by the ones who made the irrational decision. - Randall Munroe
Two possibilities exist: Either we are alone in the Universe or we are not. Both are equally terrifying. - Arthur C. Clarke.

Oh gosh the new sector stuff looks amazing. I'm super looking forward to it! Being able to control them will make them much more usable.

Does this also mean we can leave planets out of sectors entirely, should we want to? No more automatic sector generation?

Can we take out the resources from the sector stockpile to the main one (with heavy influencce cost and only like 75%) in case all planets in the sector is fully developed?

Nice
Toggle signature
Sorry for my English I'm French
May the force be with you always... ​

Sounds great. One question: it looks like we are seeing some archaeology icons. We already have so many icons with starbases, megastructures, wormholes, gateways, and L-gates, it can already be difficult to find wormholes or whatever you might be looking for. Is there any chance you could color code them for clarity? I realize there is a mod for that, but it doesn't seem like an unreasonable vanilla request, especially with archaeology giving us more symbols to visually scan.

grekulf said:
Designations
Previously planets would automatically assume a role depending on what was built on it. It’s now possible to set this manually, if you wish to. Having played with this myself, I must say it feels pretty great to be able to make that choice directly yourself.
Click to expand...

It seems to me that being able to change the designation of a planet at will with no cost a bit odd. I'd suggest making the initial designation free, but after that it should have an influence cost, with a cooldown on how often it can be changed.

I admit that I am bitter after Megacorp and the recent months.
But let me say:
holy shit. This looks quite interesting and if it works as intended...

Make governors have their own AIs, traits, ethics, and objectives likes CK2 characters (and make it so they can't easily be switched around, in a democracy, the people on a given planet would elect their own leader for instance)

Good stuff, managing 50-planet empire may become bearable. One thing left to wish for is some form of automatic pop migration. Unemployed homeless pops really should gravitate to where jobs are.

Also, can we edit build order for particular designations?

So the new sector system will be only for automation purposes? If you don't want to automate, it can essentially be ignored?

Finally no more random capital in sectors ^^ and monthly automatic transfer to them back I think I will use them again even
Toggle signature
"Now I am become Death, the destroyer of worlds."

Sigma 582 said:
Unemployed homeless pops really should gravitate to where jobs are.
Click to expand...

I love it. In the short term I'm happy with the much improved automation. In the long term I'm very excited about sectors. They could introduce some very interesting mid-level management given that the planet-level automation works well enough to free up my attention. Good job!

Methone said:
Unemployment generates a lot of Emigration Push, no?
Click to expand...