Jump to latest Follow Reply
Menu
Install the app
You are using an out of date browser. It may not display this or other websites correctly.
You should upgrade or use an alternative browser.
Stellaris 48273 Bug Reports 28411 Suggestions 17555 Tech Support 2709 Multiplayer 367 User Mods 4491 Stellaris AAR (After Action Reports) Console edition 1151
Previous dev diary Next dev diary
Show only dev responses

As promised last week, we’re back to talk about something old that’s new – which, as many of you correctly guessed, is about new precursors. Adding new precursors has been something we’ve been wanting to do for quite a while now, and we’re very happy that we can now finally provide what’s been asked for.

In the next DLC you will be able to explore the fate of two new precursors, namely the Baol and the Zroni. To not spoil too much, I’ll only give a basic description of their respective backgrounds and lore.

The Baol
The Baol Organism was once a sprawling interstellar Hive Mind comprised of trillions of psychically-linked plantoids. With their ability to slowly terraform a planet's ecosystem and atmospheric gases via centuries of sustained photosynthetic processes, the Baol civilization produced a plethora of rich flora and fauna on otherwise unremarkable worlds. The Baol Organism curated lush planetary gardens and arboretums across many systems, forming mutualistic symbiotic relationships with local alien wildlife.

The Zroni
The Zroni were possibly the most powerful psionics to have ever existed, or at least they were the first to discover the dimension which has come to be known as The Shroud. Once the Zroni population reached a certain critical mass it seems that their collective unconscious minds began to make contact with the proto-shroud in dreams, leading to mass lucid dreaming. Soon the phenomenon was studied and the Zroni discovered how to psionically project themselves into the Shroud, where they found that they could manipulate the very fabric of reality with their psionic powers. It wasn't long before the Zroni discovered they could physically enter the Shroud and live like Gods, transforming the dimension to suit their whims.

Precursor changes
One of the more impactful changes we’ve made is that we have now made the precursor spawns randomized so that they will no longer spawn in a specific part of the galaxy.

We have also added some more features and rewards to the old precursors. For example, after having found the Irassian home system, you can now spend minor artifacts to unravel some of the secrets of the Irassians. The new artifact actions aren’t the only new things though, and there’s some more cool things that you will be able to find. 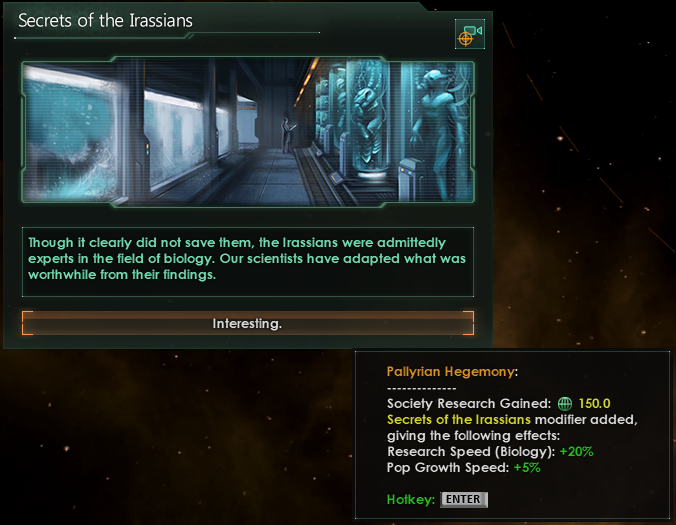 Additional precursor plans
Some of you have been asking about archaeology and adapting some of the old precursor content to use the new system. In regards to that question I will say that it is something that I always planned to do, but due to other things taking priority we can’t promise that it will happen immediately. If those changes don’t make it into the next update, it's very likely they will appear in the next big update after that. Changing that content would of course still be a part of the base game.

That is all we had to share for this week’s dev diary. Next week we’ll be back again, which also happens to be the 3 year anniversary for Stellaris
Reactions:

Will the home system spawn like it does currently?

Really liking the randomness of precursor spawns here. And just the teases of the two new ones sound cool!

we have now made the precursor spawns randomized so that they will no longer spawn in a specific part of the galaxy.
Click to expand...

So now there will be 6 precursors to find? Ooh, that's cool. Looking forward to finding them! Some questions first


- Could the First league homeworld be made smaller? Like 15 instead of 25? Still powerful, but not ridiculously powerful? Also/Alternatively I've also seen things about making it a ruined Ecum instead, that can be fixed without the perk
- Could some precursor systems get things like tomb worlds with special features? Could tie in well with digsites.

grekulf said:
We have also added some more features and rewards to the old precursors. For example, after having found the Irassian home system, you can now spend minor artifacts to unravel some of the secrets of the Irassians. The new artifact actions aren’t the only new things though, and there’s some more cool things that you will be able to find.
Click to expand...

- The changes to current precursors like Irrasians is good, but wouldn't that make Cybrex/1st league even more powerful as well? Making it almost a neutral change? Or is there more to it you haven't said? (I find that likely)​
Last edited: May 2, 2019
Toggle signature
The universe is probably littered with the one-planet graves of cultures which made the sensible economic decision that there's no good reason to go into space - each discovered, studied, and remembered by the ones who made the irrational decision. - Randall Munroe
Two possibilities exist: Either we are alone in the Universe or we are not. Both are equally terrifying. - Arthur C. Clarke.

I've actually only started paying much attention to Precursors in my current playthrough, and I like them quite a bit!
I do use several mods, some of which changing how Precursors work. They mostly add the ability to discover more Precursor planets and discover a little more about their history, which is pretty much exactly what this new update is sounding like! With a whole new 2 "stories" as well as the possibility of the new Archeology system being used with it, I think I'm going to enjoy this new update!

So, just so it's all clear: the two new Precursors are the DLC content? If so, does that make it a "Story Pack"?

I'm still hoping for more civics and overhauls for Hiveminds. They have been left alone for too long. A non DS Hivemind is a very mediocre empire at this point and lacks the strengths of Machine Empires or regular empires.

Its perfectly clear the the community desperately craves for a big Hivemind overhaul. Just look at how many people are supporting Complex for his Forgotten Queens mod or Gulli who also recently added some more playstyles for Hiveminds. And thats just the most recent ones. There have been countless modders and users who have been playing with Hivemind mods. Be it the scourge ship mod, the only one that grants Hivemind actual biological ships or just portraits.

Oooh, new Precursor storylines? Looking forwards to it! More lore about Hiveminds is certainly welcome (here's hoping we get a Hivemind Fallen Empire eventually, still!) and some more Shroud/Psionics lore will be interesting to see.

Tech Noir Synth said:
You could make such great Hivemind civics by utilizing the new "corporate tab" in the planet screen, allowing us to infest other planets like a criminal megacorp and abducting pops or causing rebellions to happen.
Click to expand...

Will those systems still be identified with their system flags (precursor_1 precursor_2 etc)?
Click to expand...

I believe so. I think what the randomization does is that it randomizes where the "pie slices" end up.


bobgrey1997 said:
So, just so it's all clear: the two new Precursors are the DLC content?
Click to expand...

Looks cool!
Are there planned any special interactions between the Zroni and materialistic empires in regard to their opinions on psionics?
Toggle signature
- "Who am I?"
- "Yes"

I hope that First League will be fixed. Even with tile blockers, ecumenopolis before 2250+ is too strong and just breaks game balance.

This new DLC looks to be shaping up into something really nice. Very much looking forward to it.

So I think we can now assume that Zro is just the powdered remains of the Zroni. Our Psionic empires have been snorting dead aliens all this time...
T

Excellent.
Toggle signature
When you're crowded out by freedom's price and you take a shred of bad advice, the system knows but you're kept underground
When you can't afford a flight to Mars, when you were never born to touch the stars, the endless maze of concrete wears you down
Can you theorize our better lives where the grass is green on the other side? We'd compromise and find a way to thrive
If you're scared of being left behind, then you'd be so disturbed with dreams like mine, the realization that our world's alive
T

grekulf said:
Yes, they will be a part of the next DLC.
Click to expand...

So, I assume it's a Story Pack DLC, then...
I always like good story packs! Games with good storylines, regardless of genre, are always hard to find!
I'd much rather have a good story pack any day over a "feature" pack (though both are good).
And a story pack about Precursors...
I can't wait!
Now just to hope the by the time it releases, I actually have the money to afford it!

Suggestion for the Cybrex. I feel like the Ruined Ringworld reward is a bit underwhelming compared to the First Leage where you get an Ecumenopolis. You still need the Mega-Engineering tech to repair the Ringworld, which may take a long time to get. And when you get it you usually also can get the Great Wonders tradition and build your own Ringworlds.

I would therefore suggest that it should be able to repair the Ringworld without that tech. Just as you can repair the First Leage Ecumenopolis without having the Arcology tradition. That way the Cybrex Ringworld would be usable earlier in the game and become more valuable as reward.
Show hidden low quality content
You must log in or register to reply here.
Share:
Facebook Twitter Reddit Tumblr WhatsApp Share Link
Top Bottom