Jump to latest Follow Reply
Menu
Install the app
You are using an out of date browser. It may not display this or other websites correctly.
You should upgrade or use an alternative browser.
Stellaris 46874 Bug Reports 27006 Suggestions 16424 Tech Support 2584 Multiplayer 358 User Mods 4417 Stellaris AAR (After Action Reports) Console edition 1120
Previous dev diary Next dev diary
Show only dev responses
Hello everyone!

We’re back for this week’s installment of the Stellaris Dev Diary. This week we will covering a mix of paid and free features. More exactly, we’ll be talking about the Slave Market, Unity Ambitions and new Mandates. I bet I know which one you’ll want to read about first, so let’s start with that one.

Before we start I need to reiterate that this dev diary contains things that are WIP, with non-final numbers, interfaces or mechanics that might change.

The Slave Market (PAID)
To better facilitate slaver playstyles, we’ve added the Slave Market feature to MegaCorp. This will allow more easy transfer of slaves between empires. In MegaCorp, nothing can stand in the way of the pursuit of profit. 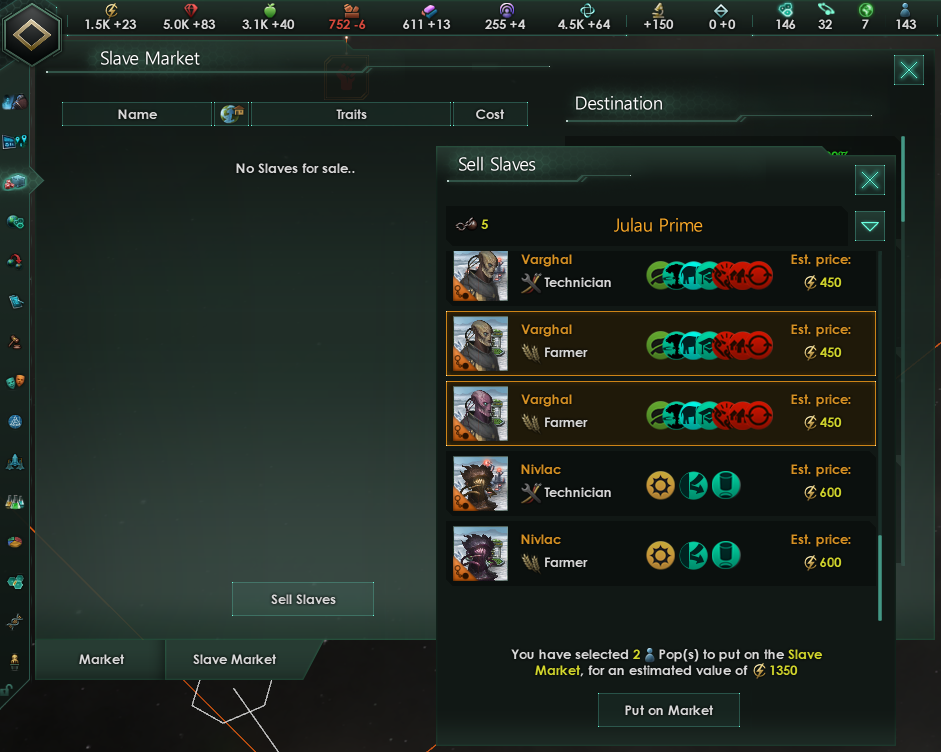 To sell a slave you select one or more Pop(s) on a planet (it must be enslaved). Right now the interface shows planets as the drop-down, but we will be changing it so that you first select a species, and then the list shows the different planets. We’re tweaking the interface right now, so some things might look a bit different as the next couple of weeks pass. 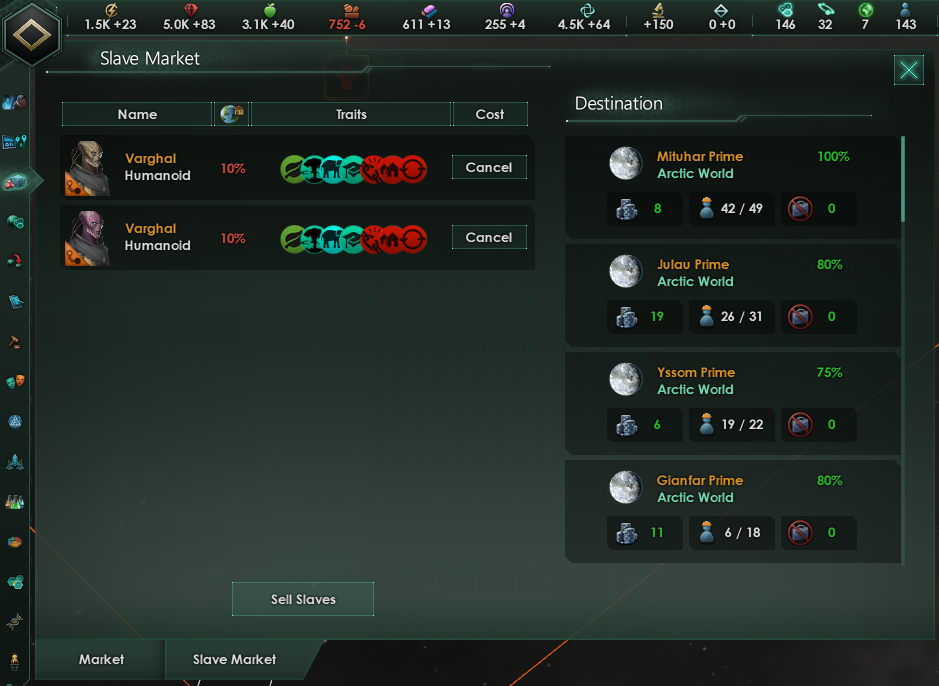 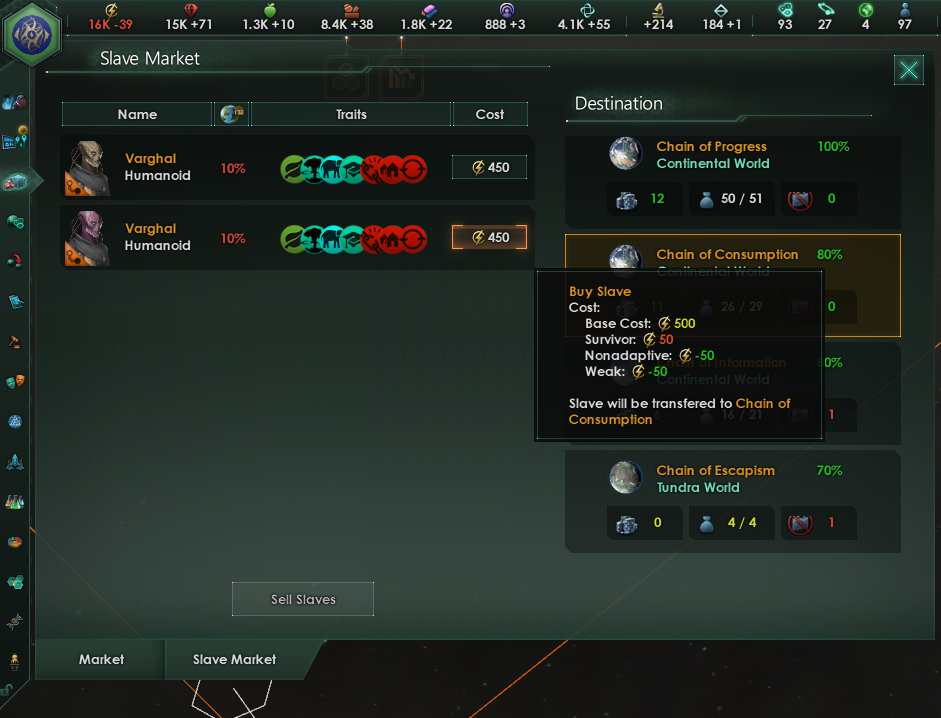 To buy a slave, you select a destination planet and then simply click the buy button. This will complete the transaction and move the pop to your selected planet.

We are considering adding a simple bidding process as an additional step, but at this time we cannot promise that we will have time to add it before the release of MegaCorp.

Unity Ambitions (FREE)
Because of the changes to the economy system, with Unity coming from multiple sources and being a more integrated resource, we wanted to make sure that Unity is always useful. Previously a paid feature in Apocalypse, Unity Ambitions have now been made a free feature in 2.2 'Le Guin'. 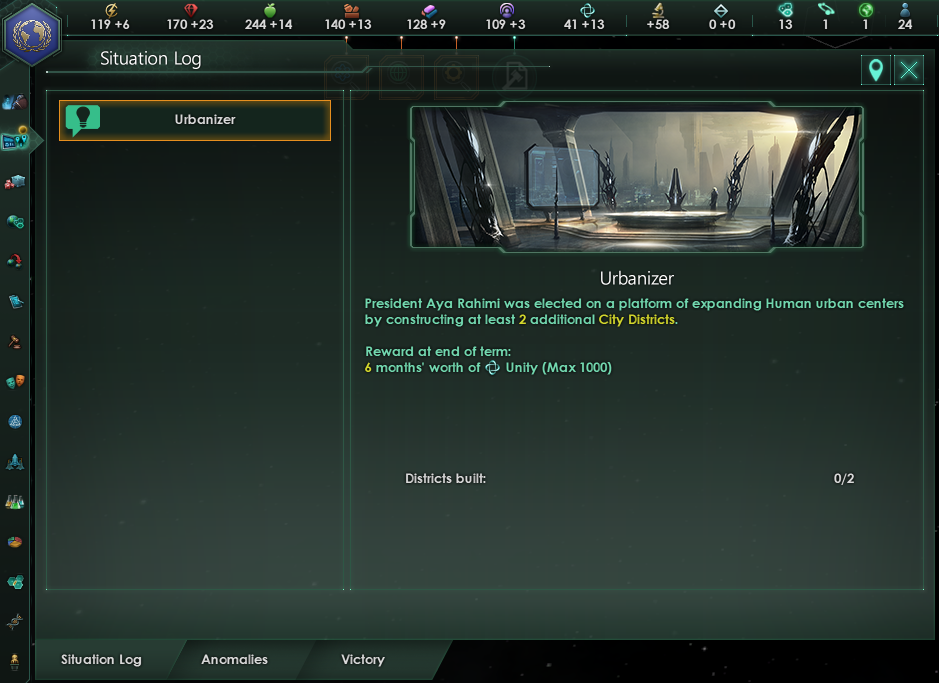 That is what we have for this week. Next week we’ll return with a Dev Diary about what the community can expect in terms of new Modding capabilities for 2.2 (hint: It's a *lot* of new capabilities).

Don’t forget to tune into Twitch for the Dev Clash at 15:00 CET, so you can see us whack at each other with our new pointy sticks! You can also watch a summarized version on YouTube.
Last edited by a moderator: Nov 15, 2018
Click to expand...

Is it possible to send slaves to market by event?
Toggle signature
Some Stellaris mods.

I just wanted to know, if the AI is able, to handle a slaving empire correct, in terms of pop-growth.

For example: Lets say, I have 6 diffrent species on my planets (or 6 diffrent, genemodded people of my own race, which shouldn't matter at all). All of them are highly spefic for certain jobs:
(A) - My Mainrace. Mostly for Research and Unity. Paid best, in terms of Consumergoods, luxury goods, housing, and what not...
(B) - Robotic slaves, which work the mines, having the best possible ressource output. Also paid the worst or not at all. Because they are machines, they are already draining energycredits to maintain, so why even bothering with paying. We also don't pay our personal computers...
(C) - Some kind of subspecies of my main (A), working the generators for energy. Paid somewhere between (A) and (B) above average, because Research is more important but nothing is working, without energy. Especially the electric fences for (D).
(D) - Plantoid/Fungoid species, which are our Livestock-slaves, because my race is vegan - also not being paid at all.
(E) - Some kind of cuties, working as Domestic Servitude, entertaining my dekadend mainspecies (A) - paid below average.
(G) - Strong, immoral Battle Thralls, working as Law enforcers to keep the other slaves down to their positions, also serving as armies. Theese guys are being paid as (A) or nearly as high, because they keep the Crime low and the stability high. We don't want to risk any machine-uprisings or things like that, therefor some slaves are paid better then others.

Now lets say, i colonize a new planet, mainly for the rich minerals on it. If I understand the system correct, it will now try to grow my main species (A) first, because they are the only ones, which could work as the rulers. After the first pop is grown, the system recognizes, that my ruler is unhappy, because he is decadend. So it will grow a slave. It cannot grow (B), because of the missing facility, so it would choose either (C), (D), or (E), depending if the epire needs energy, food or nothing but fun.
After a few growings, e.g.: (A)(C)(A)(D)(A)(C)(A) the robotic facility is ready to roll, now the system could fill up all the mining jobs, growing (A) and (B) at the same time. After a few of this cycles, the crime rises up to a critical level, so the AI decides, it has to grow some (G), to get the planet back to a good stability...

As mentioned in the beginning: Is the AI able, to handle this growing on it's own?
Also: to be still ontopic: If I resettle, for example, 20-30 Mining slaves to a planet, to lay my hands on those minerals even faster, is the AI able, to manage the bigger crime, by buying in some slaves from the slave market, working as enforcers, to keep the miners quiet? Because it recognizes, that is not able to grow enough enforcers on its own, fast enough?

Would be hard to micromanage all of this, if you are a big empire with, let's say: 100+ planets..?

hadaev said:
Is it possible to send slaves to market by event?
Click to expand...

Slaves have to be sold by a specific empire in the current implementation. We're looking into adding the ability for slaves to be sold by the market itself (for example, refugees ending up on the slave market on occasion might be one way that happens).
Toggle signature
For every complex problem there is an answer that is clear, simple, and wrong.

This looks great. I'm looking forward to the Dev clash to see this in action now!
M

Wiz said:
Slaves have to be sold by a specific empire in the current implementation. We're looking into adding the ability for slaves to be sold by the market itself (for example, refugees ending up on the slave market on occasion might be one way that happens).
Click to expand...

Just thinking about maraders for example, who will sell player's pops instead of killing them (by bombardment event).
Toggle signature
Some Stellaris mods.

Do you get the cash as soon as you put it up on market or only after someone buys one? Can you make targeted trade deals independent of the galactic market with other specific empires so that you can offer discounts/take advantage of their desperation/sell them their captured pops back?
Toggle signature
Pssst hey kid, you want some DLCs? First one's free

MAHak said:
Will normal hivemind empires have access to the supermarket… errrhhhmm Slave market?
Wouldn’t it be a nice option for them to buy nutritious dietary supplements, that can be consumed on their home worlds?
Click to expand...

If I go Biological Ascension, why can’t I produce and sell Sterile slave POPs, ones that won’t reproduce?

Obviously, them being Sterile means that they’re worth less, but the idea is that them being Nerve-Stapled, Very Strong and Industrious more than compensates, and so other empires, including AI empires, should still want to buy them.

Darth. said:
Do you get the cash as soon as you put it up on market or only after someone buys one? Can you make targeted trade deals independent of the galactic market with other specific empires so that you can offer discounts/take advantage of their desperation/sell them their captured pops back?
Click to expand...

Only after someone buys. Right now there is no way to sell to a specific empire, maybe in the future.
Toggle signature
For every complex problem there is an answer that is clear, simple, and wrong.

Toggle signature
If you're up against a smart opponent, make him think himself to death. - C.J. Cherryh, Chanur's Legacy

Is there are plan to make the price of slaves fluctuate at all according to supply and demand? I realise that programming that sort of thing in a realistic manner is probably quite hard, but unless I'm mistaken goods on the galactic market shift in price based on how scarce they are.

Also dark question maybe but would you consider adding a special genemodded trait for bio-ascended empires for sterility? Selling self replicating merchandise doesn't sound like the best long term strategy...

Where do slaves go when they're on the market?

Any chance of the market being somewhat autonomous as with the internal market, i.e., the ability to buy/sell slaves to/from the "private sector" at worse rates?

I realise this idea could probably very easily be overpowered for slaver empires, but as it stands I kind of feel like this mechanic will become defunct if you play a slaver empire in a galaxy with too few fellow slavers.

Basically, how much does non-slaving AI buy pops to free them? And does it keep the mechanic relevant?
Toggle signature
if you don't advertise your radical [RANDBETWEEN(left | right)]-wing political leaning in your sig, are you really a paradoxian?

A very interesting market, I'm looking forward to seeing more of it and playing with it. Definitely glad that Hive Minds also get access to it, sometimes you just need a little more food to go around...

King of Zoot said:
Where do slaved go when they're on the market?
Click to expand...

Being on the market appears just to make them available for sale. Until they're bought, they sit on your world, farming away.
Toggle signature
if you don't advertise your radical [RANDBETWEEN(left | right)]-wing political leaning in your sig, are you really a paradoxian?
P

Will be possible to sell own species for empires with slave guilds?
J