Jump to latest Follow Reply
Menu
Install the app
You are using an out of date browser. It may not display this or other websites correctly.
You should upgrade or use an alternative browser.
Stellaris 46878 Bug Reports 27008 Suggestions 16426 Tech Support 2585 Multiplayer 358 User Mods 4417 Stellaris AAR (After Action Reports) Console edition 1121
Previous dev diary Next dev diary
Show only dev responses
Hello everyone and welcome to another Stellaris development diary. Today we're going to continue talking about the 2.2 'Le Guin' update, on the topic of the Galactic Market. As said before, we're not yet ready to reveal anything about when Le Guin is coming out, only that it's a long time away and we have many more topics to cover before then. Also as said before, screenshots will contain placeholder art and interfaces and non-final numbers.

The Market
The Market is a new interface accessible from your topbar, where you can buy and sell resources. Resources are bought and sold for Energy Credits, with their prices dependent on a variety of factors such as whether the Galactic Market is founded, supply and demand, and possibly also from various events. On top of the actual price of the resource, there is also a Market Fee which has to be paid for any sale or purchase, equal to 30% of the purchase value. This Market Fee is there so that it will not be possible to make money by purchasing and then immediately re-selling resources at a higher price. Resources can be purchased either in bulk, or by setting up a monthly trade, where you for example specify that you want to sell 20 food and buy 10 minerals per month, and can set a minimum sale/maximum purchase price, if you want to ensure that major fluctuations in price do not disrupt your empire's economy too much. 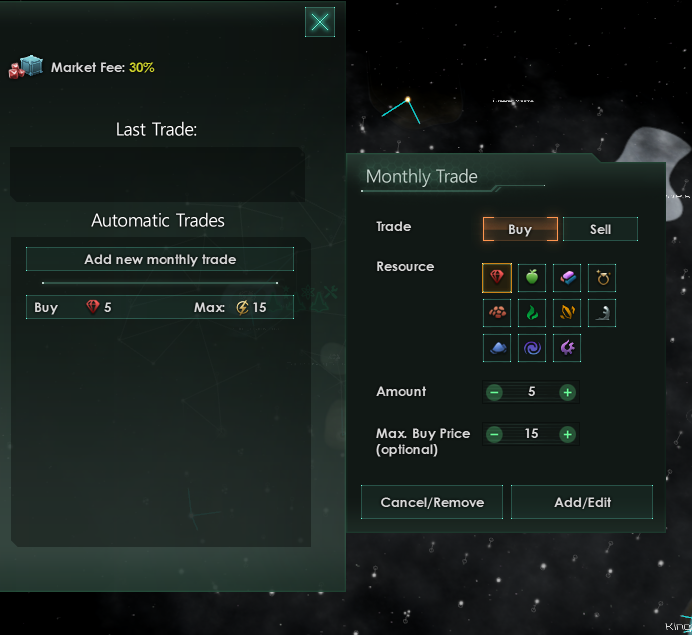 Internal vs Galactic Market
At the start of the game, empires only have access to the Internal Market, which represents trading with actors inside your empire such as corporations and local governments, or in the case of Gestalt Consciousness empires, resource reprocessing. The prices on the Internal Market are set to always be higher than those on the Galactic Market, so relying too heavily on trading will be disadvantageous in the first few decades of the game. Some empires, such as Devouring Swarms, may only ever have access to the Internal Market (this is something we're still testing and balancing) and so might get better prices there. Once the game has progressed to the point where at least one empire knows about at least 50% of the other empires in the galaxy, the Galactic Market will eventually be founded. One empire that meets the criteria is picked as Market Founder, and their capital system becomes the Market Capital, spawning a special station and map marker to denote it. From then on, any empire (barring possible restrictions for Devouring Swarms and the like) that knows of the Market Capital system has access to the Galactic Market and is able to trade on it. The controller of the Market Capital get a reduction in their Market Fee and increased trade value for their trade routes (more on that in a later DD). 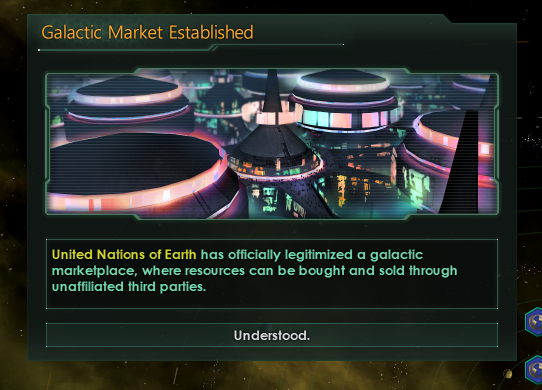 Prices on the Galactic Market are always lower than those on the internal market, though the actual prices will fluctuate based on supply and demand - every time Minerals are sold on the market, prices will drop, and conversely, every time they are bought prices will increase. The purchases and sales you make on the Galactic Market do not just affect your own prices but also those of other empires, so that it is possible to for example massively drive up Food prices by purchasing a huge amount of food, damaging the economy of any empire that is reliant on importing it. It isn't actually possible for a resource to 'run out' on the Market, so you will always be able to purchase critically needed resources, though the cost of doing so may be extremely prohibitive. However, some resources (such as Dark Matter and other rare strategic resources) will not be available until they are actually accessible to empires on the market in large enough quantities, and are not available on the Internal Market at all. The aim of the Galactic Market is to make it so that it is actually a viable strategy to specialize your economy, importing resources that are difficulty for your empire to produce and exporting resources that you can produce easily in large quantities. 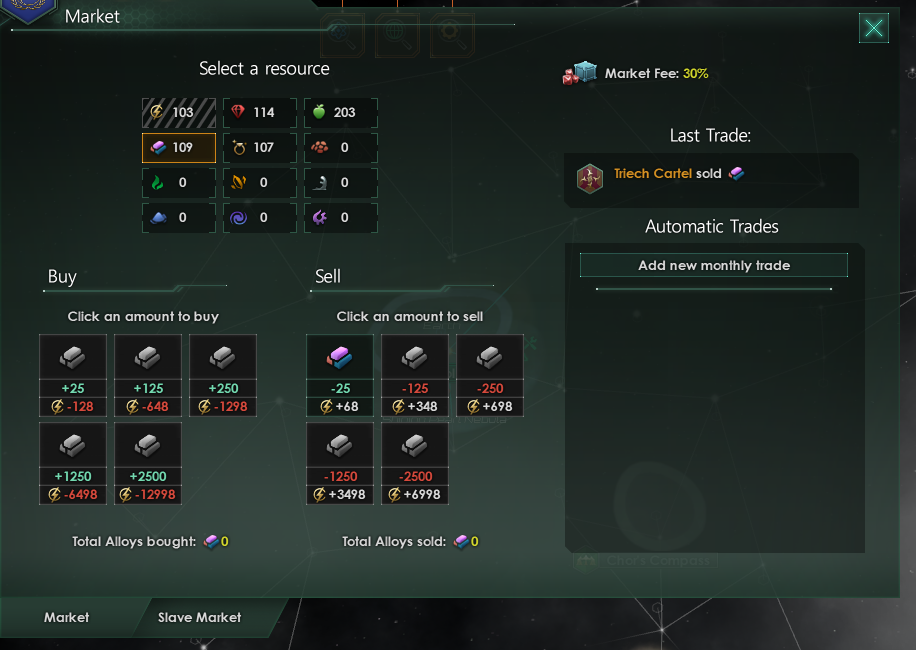 Trader Enclaves
Since the Market has much of the same functionality as the Trader Enclaves from Leviathans, we're also changing said Enclaves for those with the Leviathans Story Pack. Instead of trading food, energy and minerals, Trader Enclaves will sell rare resources (Rare Crystals, Volatile Motes and Exotic Gases) in the form of monthly trade deals offered at advantageous prices. Each Trader Enclave will offer only one of these resources. Additionally, once you reach 50+ opinion, Trader Enclaves will sell special Governor-type leaders with unique, trade and commerce related traits. Finally, if you control the home system of a Trader Enclave AND have 50+ opinion with them, you will be able to build a special Starbase building in that system which lowers your Market Fee, allowing for cheaper trading on the Galactic Market.

Finally, just a note to say that we're ignoring the Slave Market tab of the Market screenshots on purpose - this is something that will be covered in a later DD.

That's all for today! Next week we're continuing to talk about the Le Guin update, on the topic of Sectors and Factions.
Click to expand...

Wiz said:
One empire that meets the criteria is picked as Market Founder, and their capital system becomes the Market Capital, spawning a special station and map marker to denote it. From then on, any empire (barring possible restrictions for Devouring Swarms and the like) that knows of the Market Capital system has access to the Galactic Market and is able to trade on it. The controller of the Market Capital get a reduction in their Market Fee and increased trade value for their trade routes (more on that in a later DD).
Click to expand...

Is this station destructible and if so what happens if/when it's destroyed?
Toggle signature
"There is no such thing as an unbiased argument - indeed, facts support bias', or else they wouldn't exist." - Grand Historian

What about slave market?

Are the images just not loading for anyone else? It's only showing me the broken link icon.

Cool so if there is a slave market will there be a "stop slave trade" War goal against slaver empires?

I’m very interested in the automatic trade function. I look forward to cranking out some resource and automatically selling it when prices are hgh enough.

Could you add running line charts to show market trends or a ticker that you can see on the main map to track prices?
K

Will there be corruption system in the next update? we need that to make our empire more vivid.

How is it decided if a price increases or decreases on the market? In other words how much minerals do you have to sell to achieve a change in price? Does the market become less volatile the longer the game runs ? At the start selling 1000 minerals should have a large impact but in the late game the effect of 1000 minerals should be low, right?

I am so excited!
How exactly will the location of the market be determined and is it possible to influence it?
Toggle signature
"Huh, why did I miss that in my first read?"

-My brain while re-reading dev diaries occasionally.
Although sometimes in Dutch.
But usually I am thinking in English while reading English text.
This whole part is unnecessary isn't it?
Eh, keeping it in anyway.
F

Are there going to be any events that affect trade prices? Like a rapidly-reproducing pest that end up eating all the food that was being stored for sales, or some explorer hitting the jackpot finding an ancient empires entire store of alloys and dumping it all on the market at once?
Toggle signature
My stupidly long idea on how Nomadic Empires in Stellaris might work.

Finally a market! i was waiting for this

I hope there will be options to ban the slave market (we need a Space UN!). I don't want one in my galaxy

Also, I would love to see more graphs and flavour art in the finished UI.
Last edited: Sep 13, 2018

Thanks for the dev diary!
A few questions:
Once the market capital has spawned, can it be moved?
What are the criteria for becoming market founder (aside from communications with other civs)?
Is the market capital intended to be something that empires are actively competing to spawn in their empire, or is it more of an incidental bonus?

Help me out with the abstraction here: if there's an internal market, this means that those actors produce their own resources that you don't have access to otherwise because, after all, the Pop productions in your empire are only those controlled by the state?