Jump to latest Follow Reply
Menu
Install the app
You are using an out of date browser. It may not display this or other websites correctly.
You should upgrade or use an alternative browser.
Stellaris 47816 Bug Reports 28042 Suggestions 17224 Tech Support 2662 Multiplayer 363 User Mods 4462 Stellaris AAR (After Action Reports) Console edition 1141
Previous dev diary Next dev diary
Show only dev responses

Hello everyone and welcome to another Stellaris development diary. Today we're going to continue on the topic that we started on in Dev Diary #121: The Planetary Rework coming in the 2.2 'Le Guin' update. As this is a massive topic that affects many areas of the game, we've split it into four parts. Today's part is the last one, in which we'll be talking about how some special empires and planets such as Hive Minds, Machine Empires and Habitats will work under the new planetary rework system.

Gestalt Consciousnesses
One of the aims of the Planetary Rework was that we wanted to be able to present the different kinds of societies in Stellaris as actually being different on the planet. Under the old system, the planet of a Gestalt Consciousness feels very much like the planet of any other empire, save for a few minor differences such as the fact that the pops don't have happiness. Under Le Guin, this will change considerably, with Hive Minds and Machine Empires getting their own districts, buildings, strata, jobs and planetary mechanics. Hive Minds and Machine Empires share some mechanical differences with normal empires - they do not produce Trade Value and have no internal trade routes (more on this in a later DD), their pops lack Happiness, and instead of Crime they have Deviancy, representing Drones that malfunction or go rogue in some manner. Instead of the normal Strata, pops are generally divided into Simple Drones and Complex Drones, with the previous producing amenities and raw resources and the latter producing research, unity and finished goods. Amenities for Gestalts represents the necessary maintenance capacity required for planet to be functional, and impacts Stability directly instead of affecting Pop Happiness. Stability is still a factor for Gestalts, representing how smoothly the planet is functioning as a part of the collective. A low-stability Gestalt planet will not experience revolts if there are only drones present on it, but it will be impaired in other ways, such as resource production penalties. Gestalts also not produce or require luxury goods, with the sole exception of Rogue Servitors that need it for their bio-trophies. 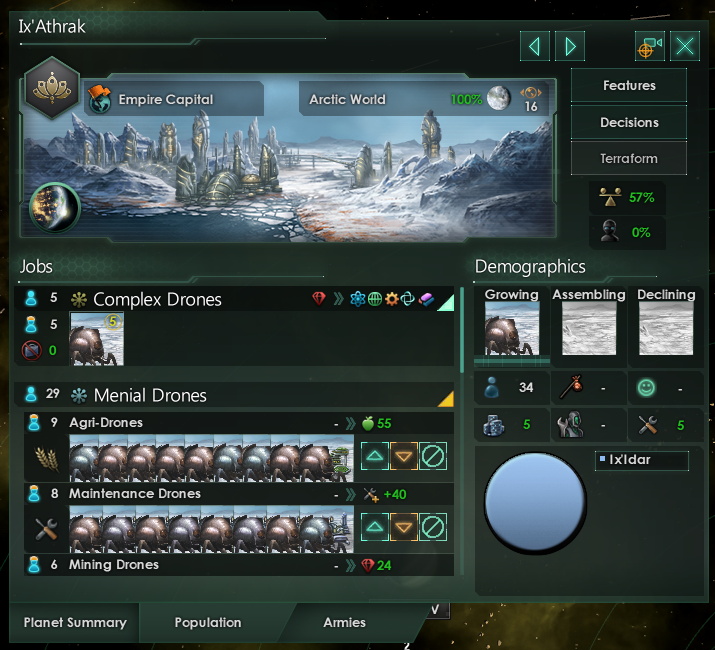 Hive Minds
In Le Guin, the planets of Hive Minds are focused around rapid growth. Instead of City districts, Hive Minds have Hive districts that provide a very large amount of housing, and each of their raw resource districts provides three jobs where a normal empire only gets two. Hive Minds use the normal biological Pop Growth mechanic, and can also make use of migration mechanics internally - drones will emigrate from overcrowded worlds and immigrate to worlds with free housing. Hive Minds also have a special building, the Spawning Pool, that provides Spawning Drone jobs which use a large amount of food to increase the rate of pop growth on the planet. Furthermore, Hive Minds have their own set of capital buildings that lack the 'colony shelter' level - a newly colonized Hive Mind planet has a fully functional capital present from day one. All of these mechanics make Hive Minds ideal for a 'wide' playstyle, expanding rapidly and claiming huge swathes of space for the Hive. 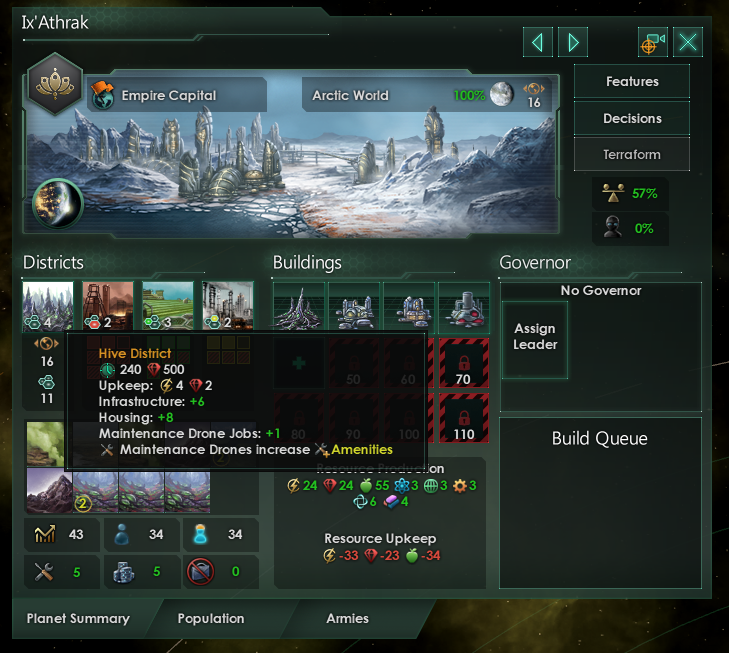 Machine Empires
Machine Empires share some similarities with Hive Minds, but rather than being focused on rapid growth, their primary focus is efficient use of resources. Like the Hive Minds, they have their own version of housing district, the Nexus District, and their resource extraction districts also provide three jobs where normal empires get two, but in addition to this they also have substantial bonuses to finished goods production, with jobs such as the Fabricator being a more efficient and productive variant of the regular alloy-producing Metallurgist. However, this comes at the expense of being unable to naturally produce new pops, having to rely on costly Replicator jobs to construct new drones. Machine Empires are ideal for an empire that wants to be self-sustaining, and truly shine when they have access to numerous kinds of natural resources. 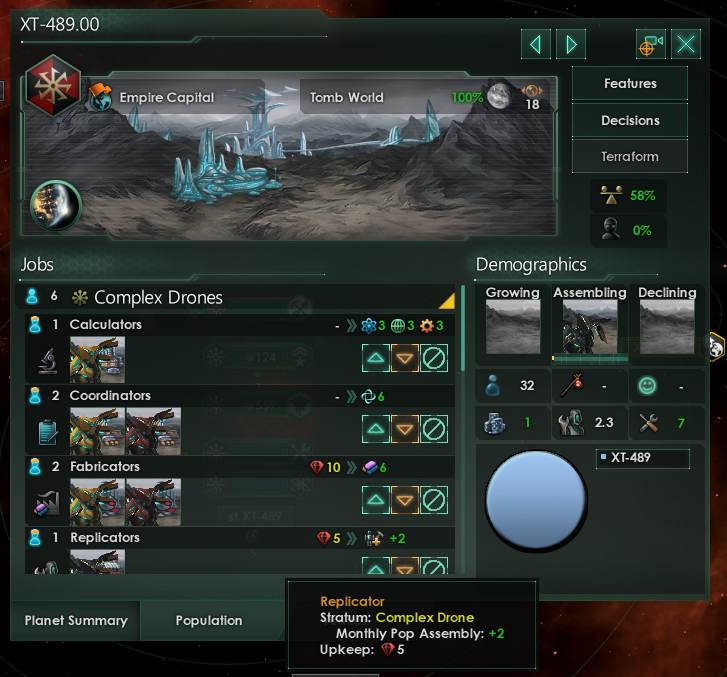 Habitats
Finally, another mechanic from a previous expansion that is changing considerably in Le Guin is Habitats. Habitats are still acquired and constructed in the same way as before, but rather than being size 12 planets with a handful of unique buildings, Habitats are now a mere size 6 (8 with Master Builders), but have their own entirely unique set of Districts. Rather than building City, Mining, Farming or Generator districts, Habitats have the following districts available:

No matter the type, each District built on a Habitat provides a fixed amount of infrastructure (currently 5, or 1 building per 2 districts). Habitats can support most regular planetary buildings, and so can be further specialized towards for example trade, goods production or research, but lack virtually all ability to produce raw resources. Since research and unity penalties scale towards an empire's number of districts rather than planets in the Le Guin update, they are also highly efficient for tall empires, as Habitat districts provide a larger amount of housing, infrastructure and jobs compared to regular planet districts.

(NOTE: This interface is extremely WIP, the finished version will have non-placeholder art and better district number display, among other things) 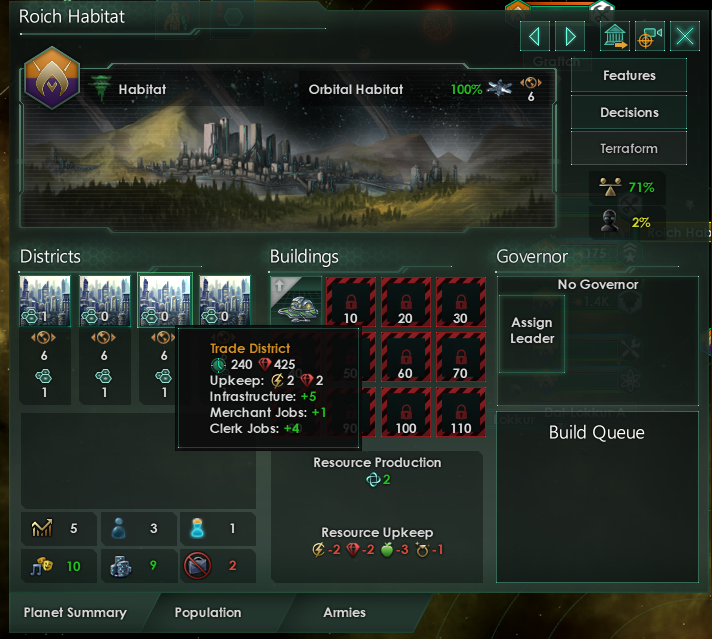 That's all for today! Next week we're finally moving on to the rest of the Le Guin update, starting with the Galactic Market. We may be done talking about the planetary rework (for now), but there's much more to the update we've yet to even begin showing you!

The ring worlds will be managed like a giant habitat?

Ah my Cat People will have all the pampering!

We haven't finalized the design on how Ring Worlds will work yet. I'll probably mention it in a later DD when it's nailed down.
Toggle signature
For every complex problem there is an answer that is clear, simple, and wrong.

But can Gestalt empires trade with any other empire at all?

Perhaps stability should be renamed to efficiency or something like that for gestalt consciousness?

UltimateTobi said:
But can Gestalt empires trade with any other empire at all?
Click to expand...

Yes, through the galactic market at the very least. More on this in later DDs.
Toggle signature
For every complex problem there is an answer that is clear, simple, and wrong.

will habitats become cheaper? taking account for any inflation/deflation caused by leguin

Wiz said:
Hive Minds also have a special building, the Spawning Pool, that provides Spawning Drone jobs which use a large amount of food to increase the rate of pop growth on the planet.
Click to expand...

Thanks for the informations, that update seems more promising every week !

One question about the complex drones of the hive mind : we see no production, only
Mineral ==> Other Ressources
Does that mean that every complex drone have the same productivity of turning 1 mineral into one of each other ?

Just a question though, concerning Gestalt stability: wouldn't it have been more interesting to go for a less "black/white" system ? One where, say, high stability would mean higher resource production, but research malus, while low stability would increase research speed but with the risk of the colony splintering from the main Hive Mind and "rebelling" in their own way. Might probably be too complicated, especially when it comes to the AI properly managing it, but I wonder if that kind of idea has been considered.

I might finally play another hive mind game..
I'll be very curious to see how the new habitats work out as well.

Will habitats still be able to capture the yields of the planets they orbit or does that just not translate to the new system?

Wiz said:
[...] they have Deviancy, representing Drones that malfunction or go rogue in some manner.
Click to expand...

• Mark technologies which are part of a research agreement​

Talking specific resource numbers isn't really relevant until the final balance of the new economic system is more in place.
Toggle signature
For every complex problem there is an answer that is clear, simple, and wrong.

I am so excited for Le Guin!
So I am finally able to put temples on habitats?
Toggle signature
"Huh, why did I miss that in my first read?"

-My brain while re-reading dev diaries occasionally.
Although sometimes in Dutch.
But usually I am thinking in English while reading English text.
This whole part is unnecessary isn't it?
Eh, keeping it in anyway.

Wiz said:
Yes, through the galactic market at the very least. More on this in later DDs.
Click to expand...

Also, do you plan to enable Gestalts (Machine Empires (not Servitors)) to produce Food if they wish (to trade it preferably)?

lilsaihah said:
Will habitats still be able to capture the yields of the planets they orbit or does that just not translate to the new system?
Click to expand...

Not in the sense of getting it as a resource on the habitat itself, but they'll probably automatically 'mine' the planet like a mining/research station would.
Toggle signature
For every complex problem there is an answer that is clear, simple, and wrong.