Jump to latest Follow Reply
Menu
Install the app
You are using an out of date browser. It may not display this or other websites correctly.
You should upgrade or use an alternative browser.
Stellaris 46895 Bug Reports 27024 Suggestions 16441 Tech Support 2588 Multiplayer 358 User Mods 4419 Stellaris AAR (After Action Reports) Console edition 1124
Previous dev diary Next dev diary
Show only dev responses
Hello everyone and welcome to another Stellaris development diary. Today, we're going to continue talking about the 2.1 'Niven' update accompanying the Distant Stars Story Pack. Everything mentioned in this dev diary is part of the free update, not the story pack.

Space Creature Research
In the Niven update, we've gone back to the space creatures (Amoebas, Crystals, etc) and improve on their special projects and rewards. Instead of the wildly inconsistent and unbalanced rewards we have now, we have changed the space creatures so that upon discovery and completion of the initial contact project, you will now generally get up to 3 options, depending on your ethics and the type of creature:
- Hunt: This will grant a permanent damage bonus towards this type of space creature, and rewards in the form of resources on killing them.
- Research: This is the most similar option to the old events, and unlocks a special project for detailed research of the space creature that will yield a reward in the form of technology and/or permanent empire buffs.
- Pacify: This will unlock a more expensive special project that allows you to turn the space creatures non-hostile, allowing you to co-exist with them and share their space, as well as potentially unlocking the ability to research special components or weapons that they use. It is not possible to pacify certain kinds of space creatures, such as mining drones. 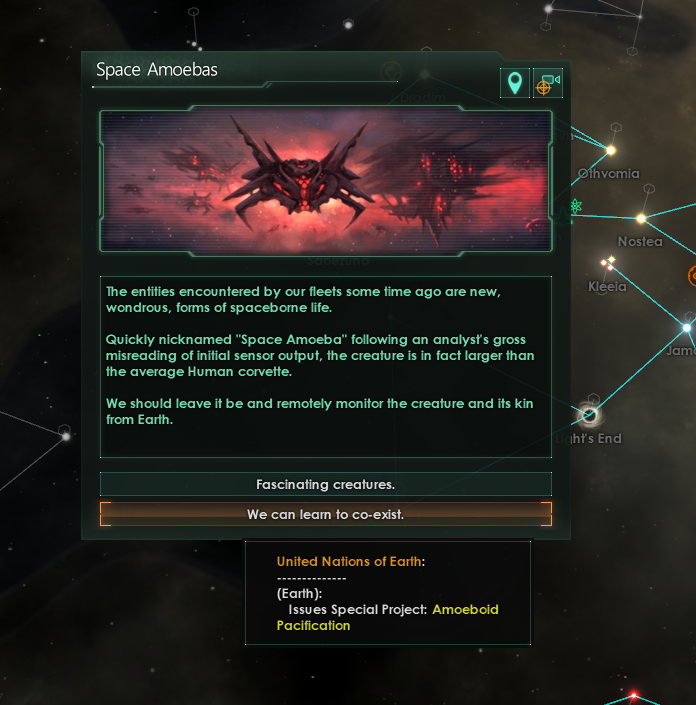 Strategic Resource Discovery
Another thing we've tried to improve on in Niven is the discovery and exploitation of Strategic Resources. Previously, while exploring, you would not know if you had discovered any strategic resources unless you first had the related technology, which generally meant that you would explore, eventually research the tech, and suddenly discover a bunch of resources on places you had already built orbital stations on - not the most rewarding or strategic feeling. We've changed this so that strategic resources are now always visibile from the start, and you will get an event informing you when a science ship discovers a new strategic resource for the first time.

Some strategic resources will be able to be exploited immediately, while others will require a technology to be researched before you can build a mining station around that planet and gain access to the resource. Strategic Resources have generally been buffed and made more rare - we've removed their tendency to spawn in large clumps in certain areas of space, so if you find a particular resource and fail to claim that system before someone else does, you can no longer be assured that there will be another of its type nearby, and generally there won't be enough of any one strategic resource for every empire in the galaxy to have access to it. 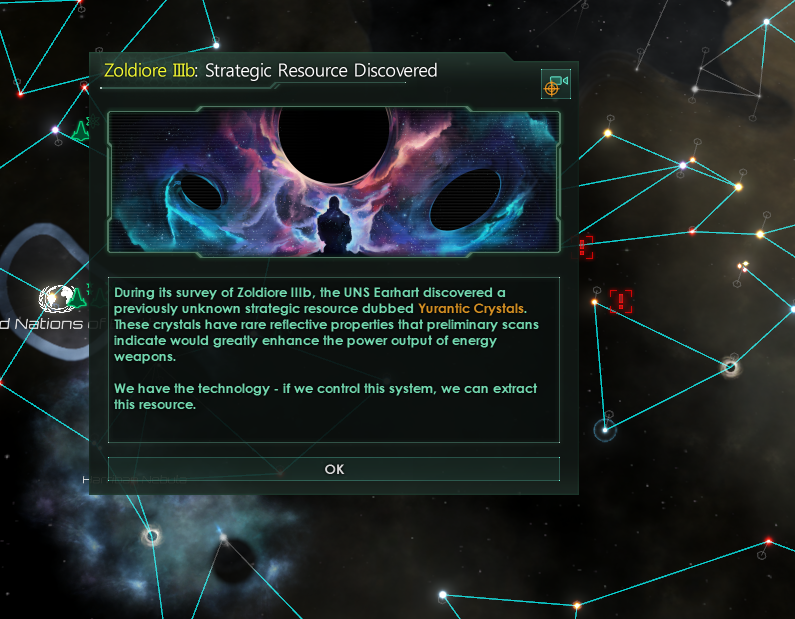 Experimental Subspace Navigation
Lastly for today is a new order we've added for Science Ships called Experimental Subspace Navigation. This order is unlocked by a mid-game tech and allows the science ship to travel to any system which you have any level of intel on (that is, has been in sensor range at least once, or is part of another empire you have communications with) while ignoring the hyperlane network. The science ship will be considered MIA for the journey and simply arrive in the other system at the end of the order, bypassing any hostile creatures or closed borders along the way. This allows even empires that have been boxed in by hostile neighbors to continue exploring the galaxy and complete event chains that might otherwise require a war. Certain special systems (such as the L-Cluster) will not be possible to travel to using this method. 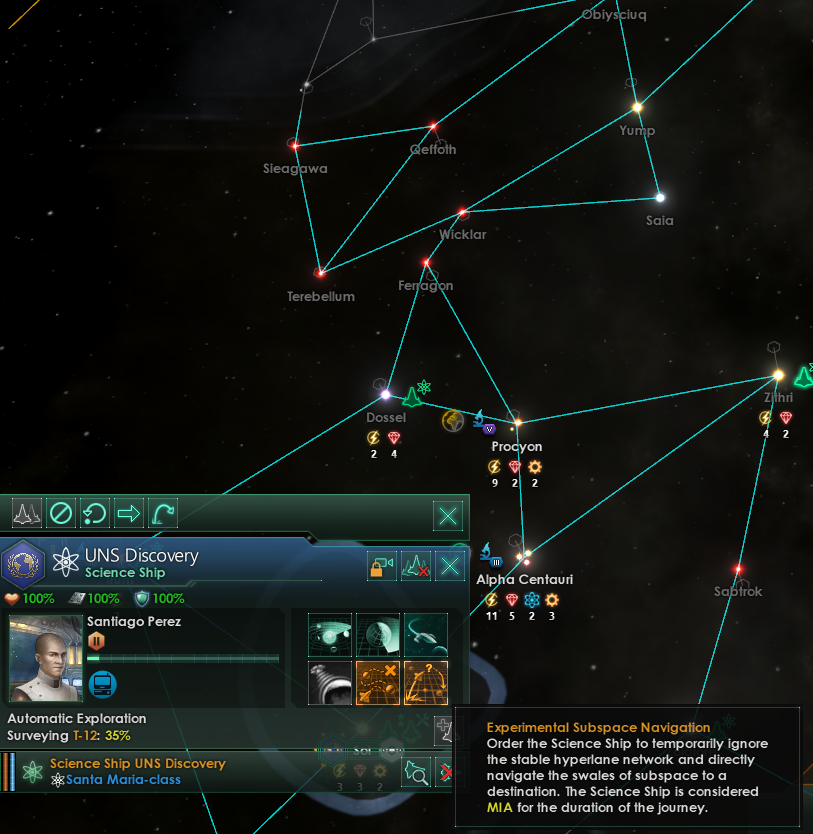 That's all for today! Next week is PDXcon, so there won't be a dev diary. There will, however, almost certainly be something related to Distant Stars talked about at the event itself, so stay tuned!
Click to expand...

The last part is fantastic. I really hate getting blocked off from galaxy arms. Not to mention how tedious it is sending your science ships back to the frontier if you have to replace one that was killed or something like that.

Curious though will the time they take to get there scale to distance? And will it end up being roughly similar to how long it would have taken to get there manually going from hyperlane to hyperlane?

Wiz said:
- Hunt: This will grant a permanent damage bonus towards this type of space creature, and rewards in the form of resources on killing them.
- Research: This is the most similar option to the old events, and unlocks a special project for detailed research of the space creature that will yield a reward in the form of technology and/or permanent empire buffs.
- Pacify: This will unlock a more expensive special project that allows you to turn the space creatures non-hostile, allowing you to co-exist with them and share their space, as well as potentially unlocking the ability to research special components or weapons that they use. It is not possible to pacify certain kinds of space creatures, such as mining drones.
Click to expand...

How does it work with migrating creatures? Say, one empire pacifies them, the other one hunts them to extinction. How will it affect "potentially unlocking the ability to research special components or weapons that they use"?

Will the air now value strategic resources more? It feels like it mainly ignores expanding to them and it doesn't understand their value if you trade with them.

Also will there be added some new strategic resources?

Do the chance for Unbidden increase the more ESN is used?
S

Any new strategic resources either in the patch or dlc?

Though may I ask if there are any changes planned for federation fleets? The issue is described here (https://forum.paradoxplaza.com/foru...f368-federation-fleets.1090696/#post-24211085) - it makes federation fleets a real pain in the butt.
H

Presumably you've played with a build using these features; do the strategic resources changes make them actually feel important now?
Toggle signature
"There is no such thing as an unbiased argument - indeed, facts support bias', or else they wouldn't exist." - Grand Historian

Currently on an Exodus going home...

Is the new option not a bit the same as how jump drives work currently or am I mistaken? Also, someone willing to tell a noob what MIA means?
Toggle signature
Currently back to writing my 4th EU4 AAR after a long hiatus:

Take a look at my Inkwell for my other AARs I made.

Pacifying space creatures is one of those things that I never thought much of but now in retrospect it feels like such an obvious thing. The implication that even the most xenophilic empire currently cannot prevent their extinction (and in fact might very easily contribute to it as a matter of course) is a bit immersion-breaking and I'm so happy it's being addressed!

And I'm even more excited about Strategic Resources being more rare and their acquisition actually becoming, well, strategic. And hopefully this is just the first step on the way to making trade better! With SRs getting buffed and becoming less ubiquitous I hope that their market value will increase accordingly and that empires that hoard and distribute them to others will actually be able to become influential and economically powerful off the back of that.
Last edited: May 10, 2018
Toggle signature
Member of Team Nessassity [Stellaris Mod Collection] [CK3 Mod Collection]

loved the subspace part. it will really help going to systems on the other side of the galaxy without worrying about it getting into a leviathan or something like that. Sure i do need contact with another empire with open borders but that is kind easy to get.

Bringing back warp travel a little bit at a time. I love it!
J

No option to tame and grow space creatures to fight for you?

James Fire said:
Will we be able to do the subspace navigation with other ships, or just science ships?
Click to expand...

Only science ships.
Toggle signature
For every complex problem there is an answer that is clear, simple, and wrong.

DominusNovus said:
Why no pacifying mining drones? As drones, wouldn’t it ne reasonale to reporgram them usingg some technobabble?
Click to expand...

Given they block very valuable mineral deposits in their systems even if not hostile, we didn't really want to introduce an option that is obviously inferior to the others.
Toggle signature
For every complex problem there is an answer that is clear, simple, and wrong.