Hello everyone and welcome to another Stellaris development diary. Today, we're going to start talking about the 2.1 'Niven' update, which will be the next major update after 2.0. At this point I cannot give you any details on the exact nature of the update or when it's arriving, but I *can* talk about some changes we're making and new features we're introducing in regards to exploration, galaxy generation and anomalies.

Anomaly Changes
In 2.1, we're changing the way anomalies work in a few ways. First and foremost, we are removing the concept of failure risk - we found that the possibility to fail on anomalies added little to the game in terms of interesting choices, and mostly frustrated players or made them wait with researching said anomalies until their chance of success was maximized. As such, instead of making it so that anomalies have a failure risk based on scientist skill level, we've instead made it so that the time it takes to research an anomaly is heavily dependent on the scientist skill versus the level of the anomaly - researching a level 2 anomaly with a level 2 scientist will be a comparatively quick affair, while attempting a level 10 anomaly with the same scientist can take a very, very long time, and might mean that it is better to return to it later with a more skilled scientist, so not to hold up your early exploration. 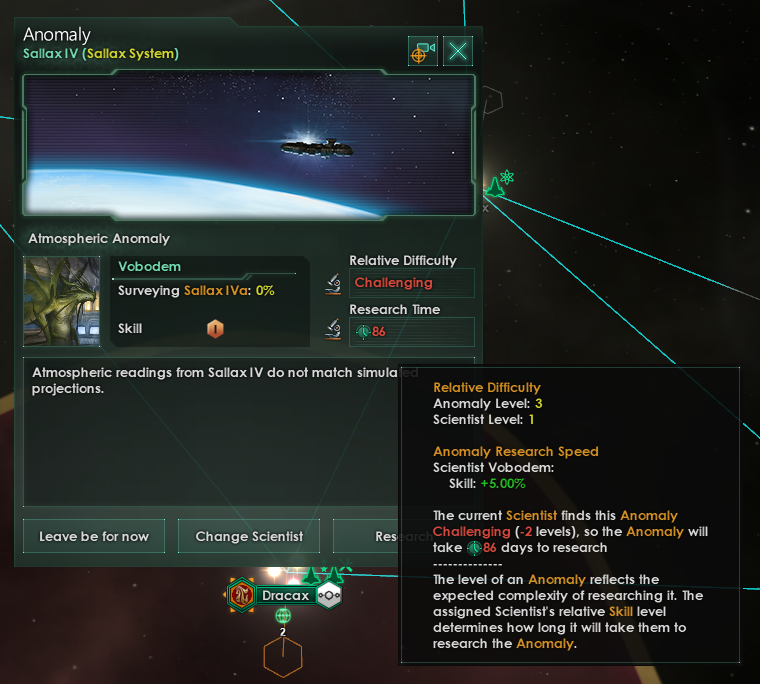 As part of this we've also added an anomaly tracker tab to the situation log. The anomaly tracker will keep track of anomalies that you have discovered but not yet researched and easily let find and you return to them. 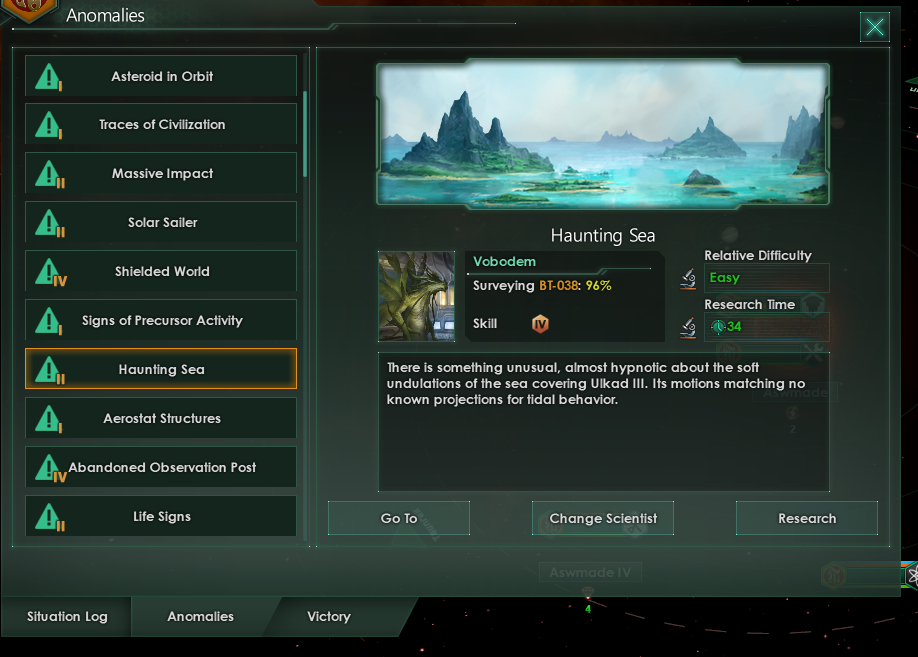 Hyperlane Generation
Another thing that is changing in 2.1 is the way the Hyperlane network is generated. Rather than simply attempting to connect stars to nearby stars, we've created a new generation algorithm that builds up 'clusters' of stars with a high degree of internal connectivity, that are connected to each other by thinner 'highways' which form natural chokepoints. These chokepoints are also registered as such by the game, allowing us to find actual chokepoint systems and avoid placing Leviathans and other powerful space monsters there, as well as improving the AI's ability to detect suitable spots for defensive starbses. The hyperlane connectivity setting will determine the level of connectivity between clusters, and thus how frequent and easily circumvented chokepoints are. 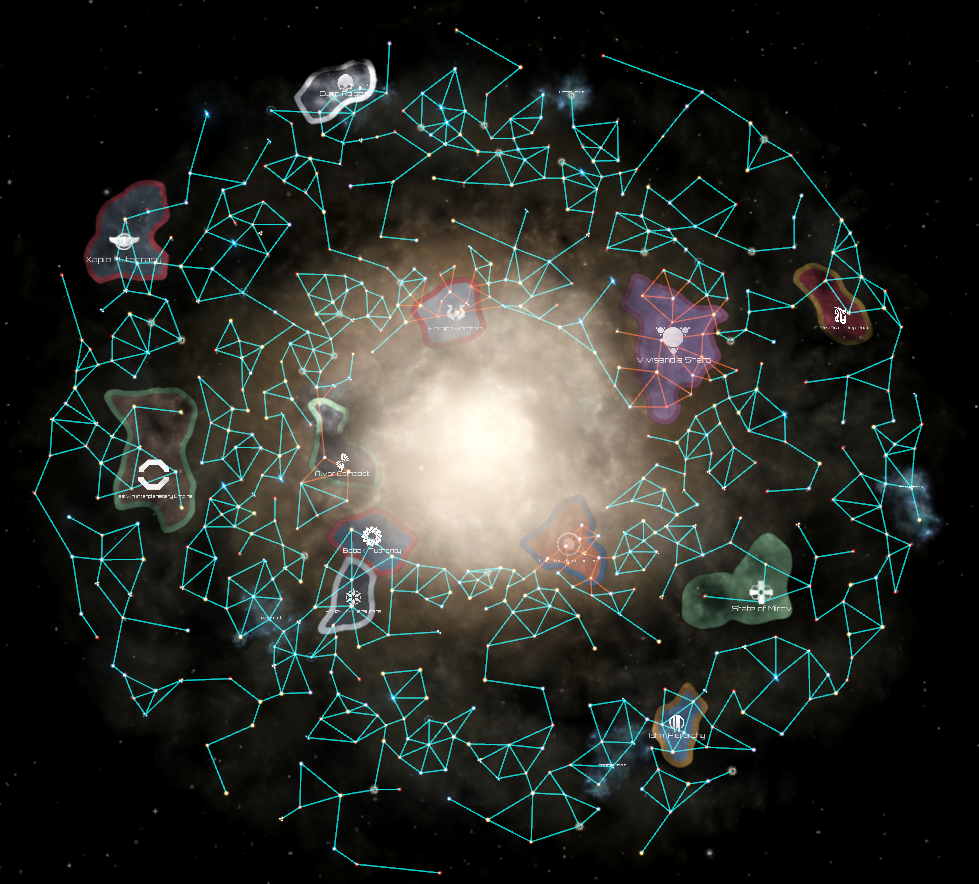 (Note: Image is not final. We're still working on the algorithm)

As part of this it will now also be possible for modders to easily generate systems and clusters of systems that are not connected to the main hyperlane network.

New Stars & Systems
Lastly for today, we've added a bunch of new system and star types to the game. First out are binary and trinary star systems - systems containing more than a single star. These systems come in a variety of configurations, and will often contain more planets and resources than conventional, single-star systems. We've also added some new star types to the game in the form of Brown Dwarves (not technically stars, I know) and Class M red super-giants. We've also made it possible to generate more than a single asteroid belt in a system, and created some new mineral-rich asteroid-heavy systems. Finally, there are some new unique systems to find with large amounts of resources in them, guarded by powerful space creatures. 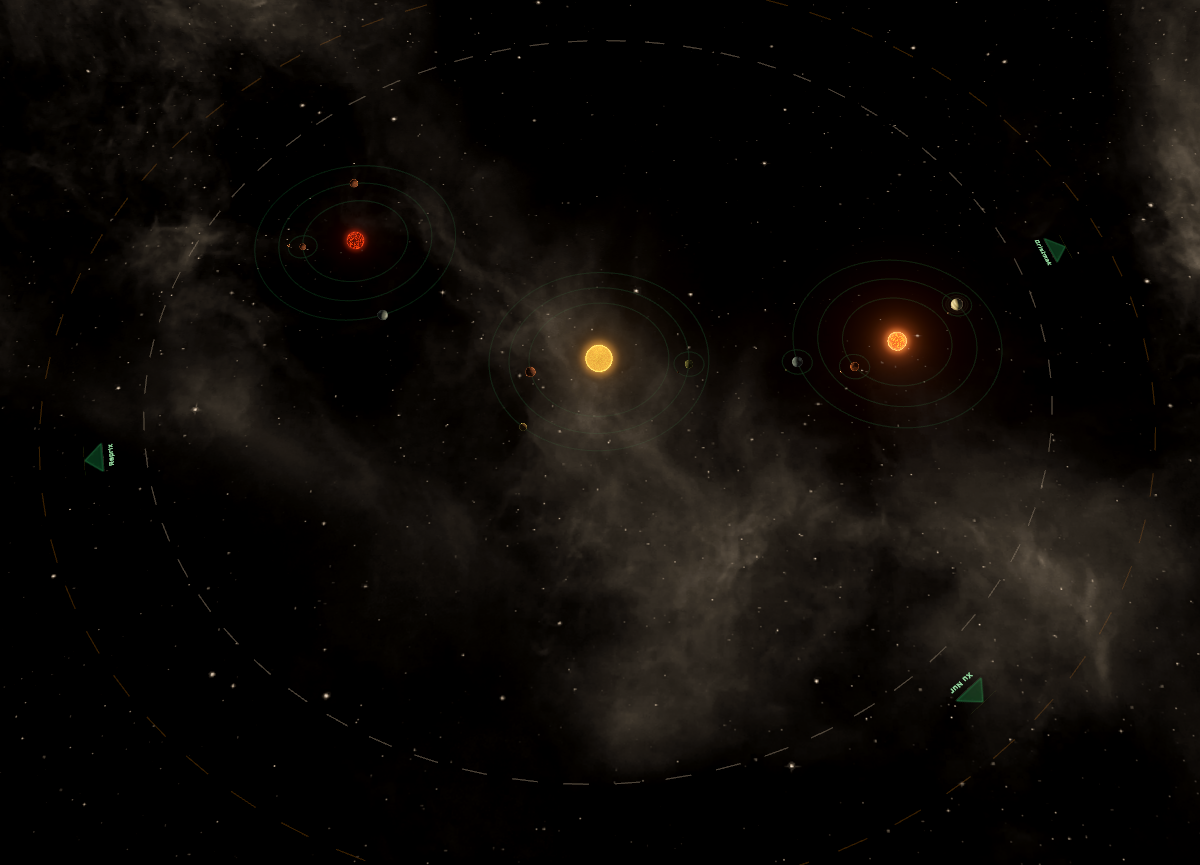 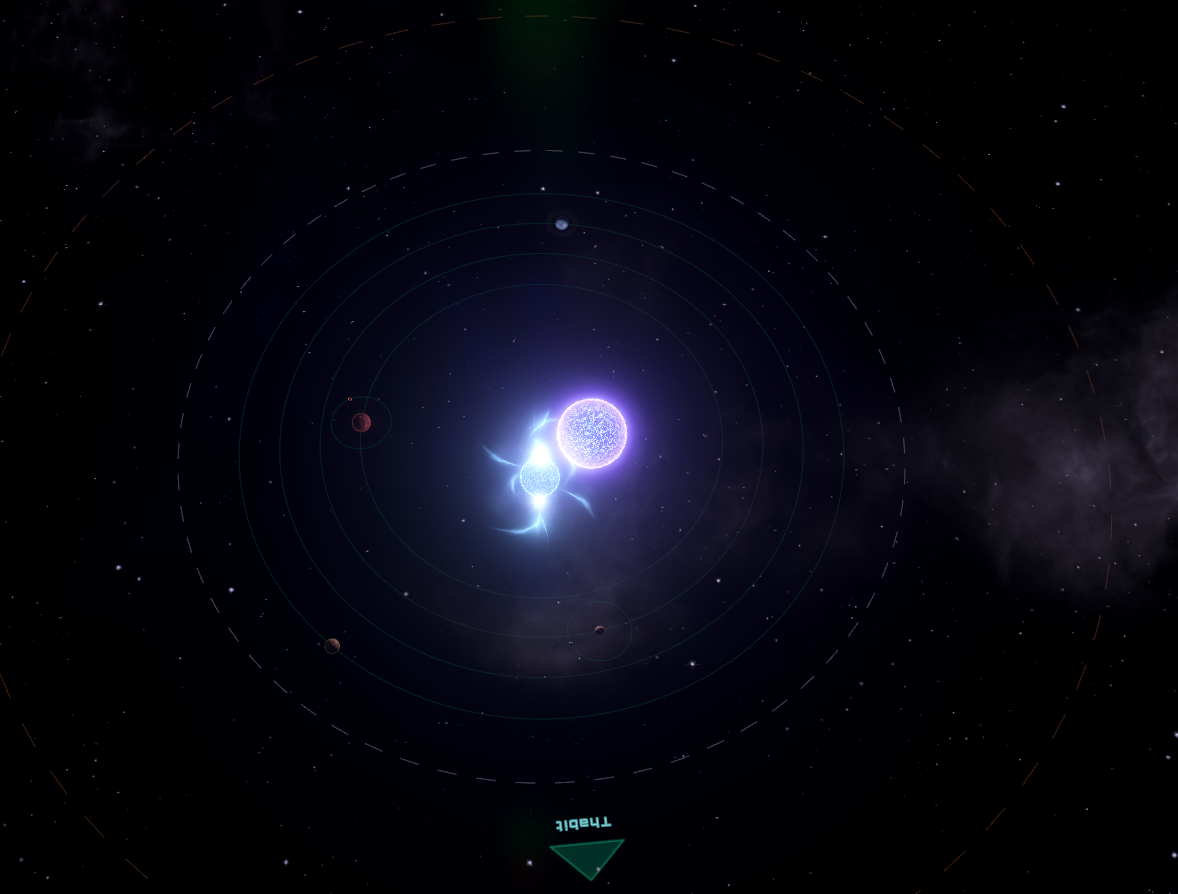 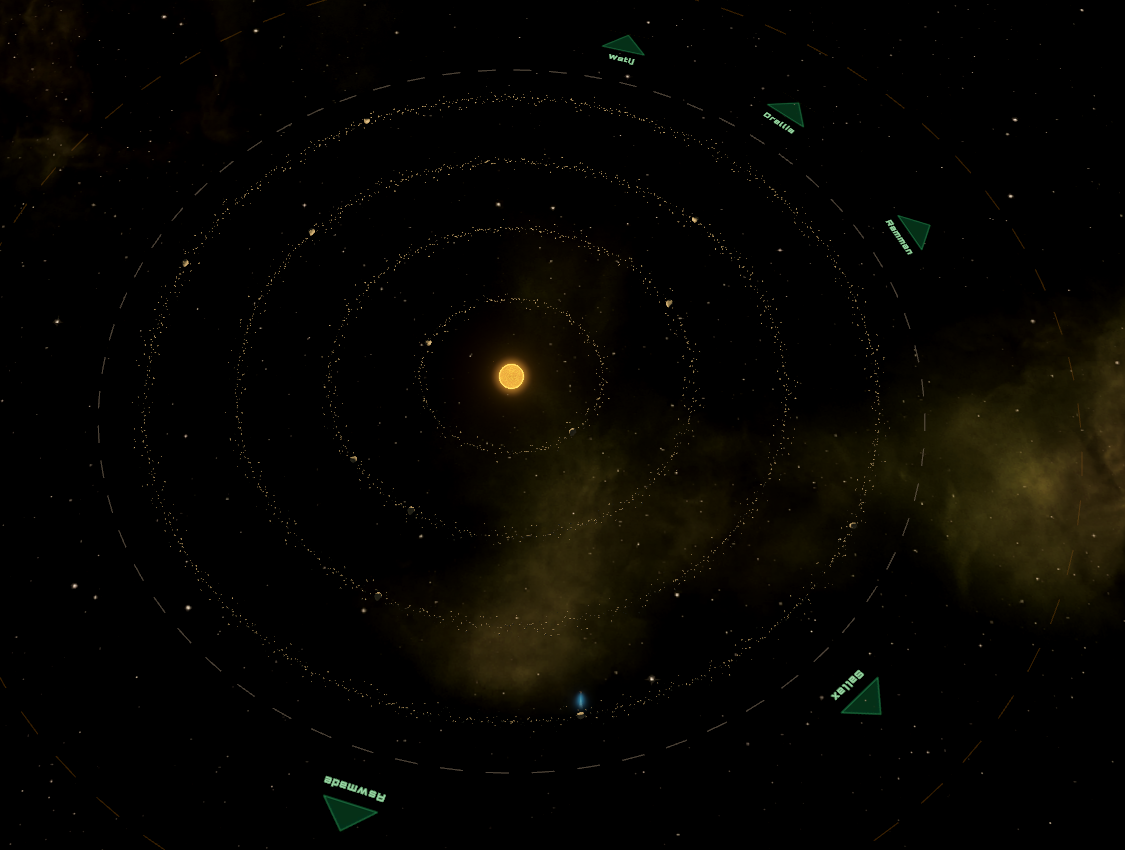 That's all for today! Next week we're going to be talking about something just a little bit mysterious called the L-Cluster... see you then!

Nice!
The all asteroids system looks quite tempting. It must have a ton of minerals.

I expect it to be swarmed by mining bots

Also, what about a system with a black hole and a pulsar? Will it even be possible?
I mean, THAT would be a great place for a citadel.
Toggle signature
Yes, that's more like it....
Wait... wat?

Wiz said:
(Note: Image is not final. We're still working on the algorithm)
Click to expand...

Shouldn't the hyperlanes be random anyway? There should be a very small chance of seeing a galaxy that looks like this one.

Stellaris: On The Hyperlane Again.
Toggle signature
If I could be three birds, I could see myself from above as I'm flying above myself.

These chokepoints are also registered as such by the game, allowing us to find actual chokepoint systems and avoid placing Leviathans and other powerful space monsters there,
Click to expand...

Please actually DO put space monsters in the chokepoints though. Having chokepoints blocked off by 'natural hazards' is an interesting, dynamic way to control the politics of empires, and it's an interesting mid/late-game question when you'd actually remove a barrier like that (or have it removed by an enemy empire).

Looks good! Are you still working on the shading in the trinary systems? I can't help but notice that the planets are only lit by the central sun, and so are sometimes in shade on the side facing their own sun...
Toggle signature
"Disclaimer: Numbers stated by Caligula may or may not be accurate to within +/- 100000% of the value" -Creature

Will systems with multiple internal planetary systems for their multiple stars also be able to support multiple ringworlds?
Toggle signature
"You know how the English conquered Wales? One village at a time. Because no Welshman would run to the next Welsh village to warn them the English were coming. You all went down warm in the knowledge that the next village would get it too and they deserved it for being foreign." -- William of Stonham

@Wiz From the twitter teasers for 2.1 it seems you also introduce "fog of war"/ exploration of hyperlanes so that at game start not all hyperlanes are already visible on the galactic map. Can you confirm this? (I think that would be cool)

Will we be able to construct dyson spheres around any of the two/three stars in a binary/trinary, or only the center one?

When changing the anomalies please also use science ships set on auto discover to automatically fly to unexplored anomalies if they have run out of things to do.
Toggle signature
Victorious warriors win first and then go to war, while defeated warriors go to war first and then seek to win. - Sun Tzu

Throw away that goddamned outpost race in the beginning plz

I like the clusters but I am concerned that it will make the already slow movement around the map even worse.

Really looking forward to more unique systems and start you can do with them.

Is it possible to build multiple starbases around multiple stars in the same system? For screenshot-1 it makes perfect sense, for screenshot-2 it's debatable.
Toggle signature
Ukrainian Lands at the 16-18th Centuries Maps
[EU4] Multiplayer Rebalance Mod (MPR by ZP) [SteamWorkshop] - a mod designed for MP fans by an MP fan

Caligula Caesar said:
Looks good! Are you still working on the shading in the trinary systems? I can't help but notice that the planets are only lit by the central sun, and so are sometimes in shade on the side facing their own sun...
Click to expand...

It's something we're aiming to improve.
Toggle signature
For every complex problem there is an answer that is clear, simple, and wrong.

No. A starbase is essentially a system base.
Toggle signature
For every complex problem there is an answer that is clear, simple, and wrong.

Nice changes.
But I have another question: will we have some "biological" kind of ship?
Like pretoryn kind of ship/structure.
I'd like to play a tyranid like game.

Is the galaxy view of systems dynamic? If you have a system with say 4 suns of different types - will it then be shown as 4 stars of the according types in galaxy view?

I know from the teaser that there are trinary and binary ones, but are they automatically generated by what is in the system?
Last edited: Apr 19, 2018

Great work. Thanks for the update.