Menu
Install the app
You are using an out of date browser. It may not display this or other websites correctly.
You should upgrade or use an alternative browser.
Stellaris 43518 Bug Reports 23476 Suggestions 13527 Tech Support 2234 Multiplayer 336 User Mods 4176 Stellaris AAR (After Action Reports) Console edition 978
Previous Dev Diary Next Dev Diary
Show only dev responses 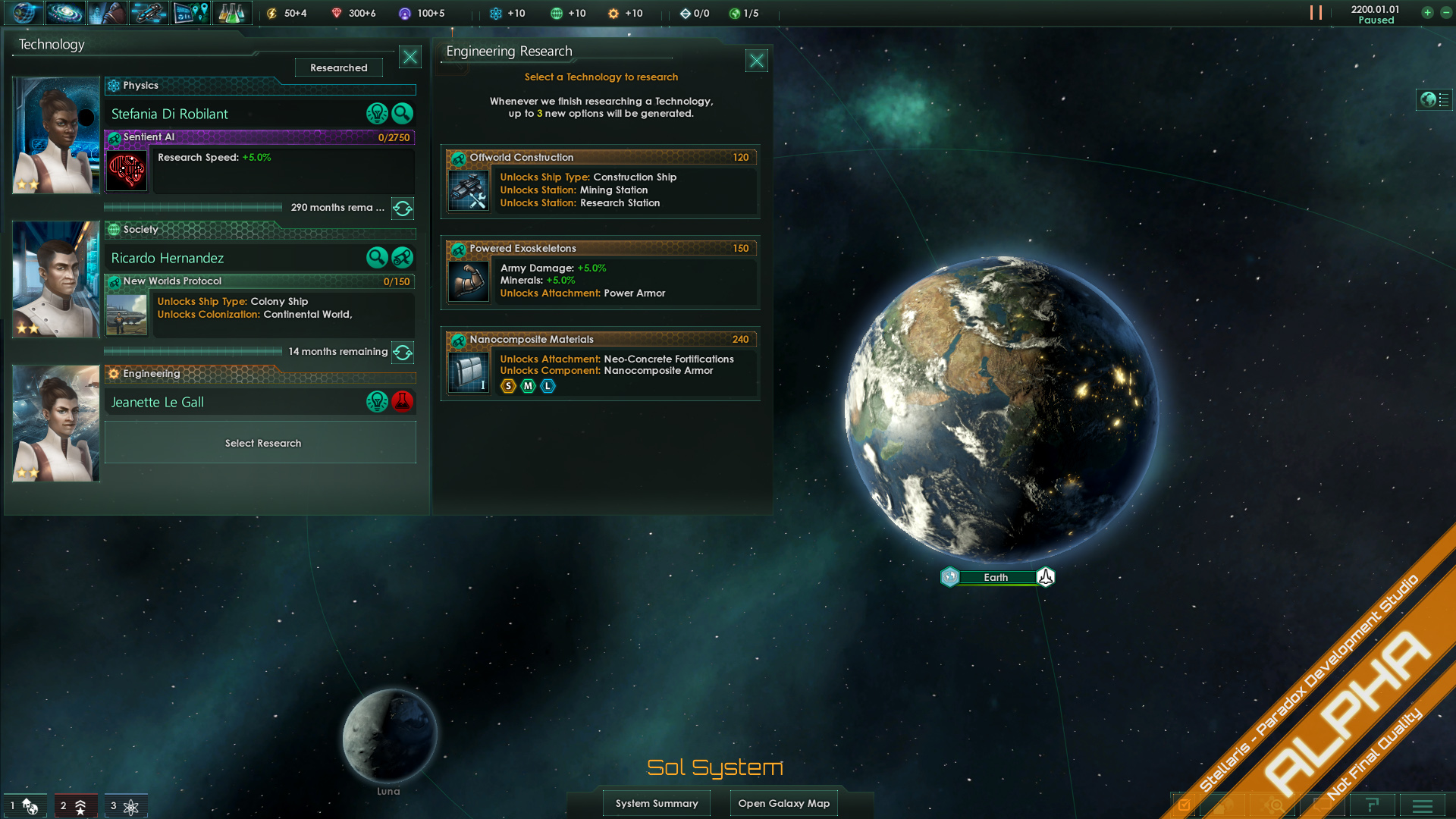 Now, I want each new game of Stellaris to be a new and different journey. That is why the game does not have a “tech tree” in the classical sense. Instead, each time you start up a new research project, you are presented with three semi-random choices. This is a bit like drawing three cards from a deck of cards, picking one and returning the other two to the deck. However, to continue with this metaphor, the trick is in the shuffling... The deck is very much stacked, so to speak. Especially in the early game, some cards are extremely likely to end up in the top, so that all players get a fair start. What happens in the background is a complex weighting of various factors, like the ethics of the empire, the traits of the scientist character in charge of the department, the techs you already have, etc. I guess you could say the result is something like a fuzzy, hidden tech tree.

Certain technologies are considered rare or very rare, and these are clearly marked so that you know you should probably pick them lest you never see them again... There are also “tech cards” outside the deck (this card metaphor is really useful!), that can only be drawn in special circumstances, like when researching certain Anomalies, investigating debris, etc.

Of course, there are only so many normal technologies to research, so you will eventually have most of them. To keep things interesting even in a very long game though, there are also many procedurally generated “improvement technologies”. For example, techs that improve all types of laser weapons by a small degree. These technologies are a bit like the “Future Technologies” in Civilization except that you can start getting them long before you’ve actually run out of scripted technologies. 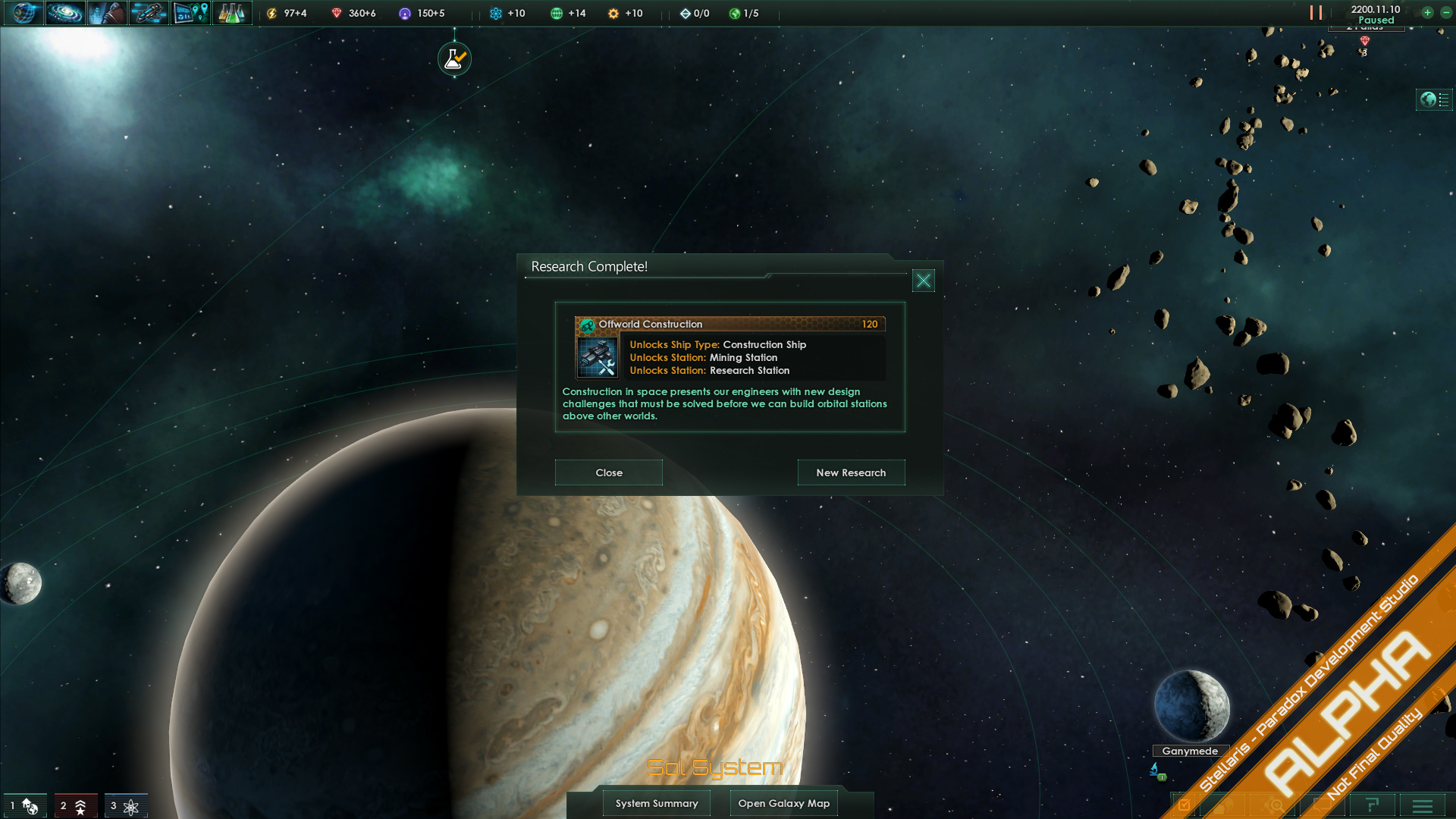 As with any game like this, techs get progressively more expensive, meaning you cannot neglect building research labs and stations lest you fall behind the other empires of the galaxy (however tempting it might be to use your precious real estate to produce more Minerals and Energy Credits…)

I think you nailed this. This seems to avoid the problem with everyone having the same technologies, which is illogical in a game with different species and ethos. Good job, as always.
Last edited: Dec 1, 2015
Reactions:
Q

So basically, you get three proposals, and have to decide which one to fund?

Also, even if there is no tree, are there prerequisites or modifiers to the likelihood of getting certain technologies? So I can't get tech B unless I have tech A, or it's more likely for me to get a proposal for tech Y if I already have tech X?
Toggle signature
Holy Roman Empire Squared (Completed EU3 AAR)
Mad Princes of Denmark (Completed EU4 AAR)​
Reactions:

quicksabre said:
... So I can't get tech B unless I have tech A, or it's more likely for me to get a proposal for tech Y if I already have tech X?
Click to expand...

Both. Sometimes there is a prerequisite, sometimes you need to already have unlocked a certain amount of techs and sometimes a tech is extremely unlikely of appearing unless some condition is met.
Toggle signature
Follow me on Twitter.
Reactions:
B

How moddable whole Technology&Research is going to be?
Reactions:

Awesome! I really like your solution for the long games. Also Power Armor!
Reactions:

Well done guys! Sounds like a nice twist to the usual way of researching techs!
Reactions:

ah very nice! so in love with this game!

what does the S/M/L stand for in the tech description of nanocomposite materials? (small,medium,large....something)
Toggle signature
Soon to be a Major religion near YOU!

BlackPrince said:
How moddable whole Technology&Research is going to be?
Click to expand...

Should be very moddable. It's easy to add or change new technologies. The only real difficulty is keeping track of the randomness and how likely techs are to actually appear.
Toggle signature
Follow me on Twitter.
Reactions:

So sentient AI would be an unlikely card draw for one's first Physics tech?
Reactions:

Doomdark said:
Certain technologies are considered rare or very rare, and these are clearly marked so that you know you should probably pick them lest you never see them again...
Click to expand...

This way, it could help to decide if such or such technology may be worth to be returned to the deck, at the risk it won't appear at all, or much later.
Toggle signature
Sorry for my bad Angliche...

Waiting for Belt and Road Project to give me a job

External factors (previous techs, ideologies, being at war or whatever) weighting on your chances to research certain techs reminds me of the invention system in Victoria 2. Did you draw inspiration from that ?
Reactions:

Power armor and the Holy Terra in the same picture: now i'm totally in love with this game
Toggle signature
01_EMBASSY_PROPOSE
Reactions:

I just came here to find some turnips, I swear!

(Maybe it seams way to easy to decide for the Offworld Construction maybe 180 for Nano would some let try it. Most likely no but maybe in Danger,..)
Last edited: Nov 30, 2015
Toggle signature
To spread your wings and fly, you must have the courage to fall from the sky.

Absolutely awesome. Thanks so much for the regular updates. A year is a long time to wait.

Nice. This is great!