Jump to latest Follow Reply
Menu
Install the app
You are using an out of date browser. It may not display this or other websites correctly.
You should upgrade or use an alternative browser.
Stellaris 47813 Bug Reports 28040 Suggestions 17222 Tech Support 2662 Multiplayer 363 User Mods 4462 Stellaris AAR (After Action Reports) Console edition 1141
Previous dev diary Next dev diary
Show only dev responses
Hello and welcome to another Stellaris development diary! Today we will take a look at some of the minor features and changes in the coming 2.0 'Cherryh' update.

Quality of Life
We have added small icons to the outliner that lets you see if planets have buildings that can be upgraded, or if there are Pops that do not have a building they are working. Similarly, you will be able to see when a starbase has an empty module or building slot.

This should make it a lot easier for you to manage your planets and starbases. 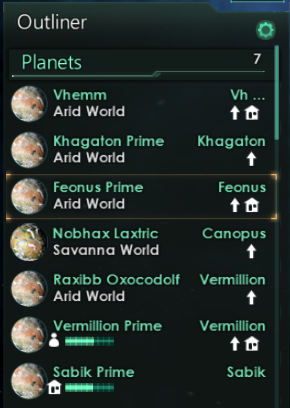 In the fleet view it is now also possible to see which designs can be upgraded. 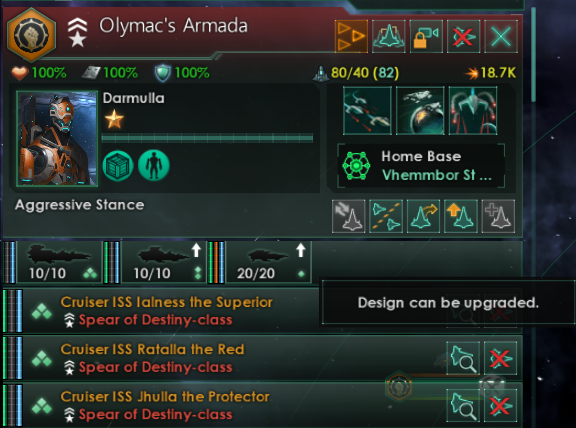 Hallowed Planets
Spiritualist empires will be able to designate an uncolonized Gaia World within their borders as a 'Holy World'. The Holy World will increase your empire's unity production as long as it remains uncolonized and within your borders. 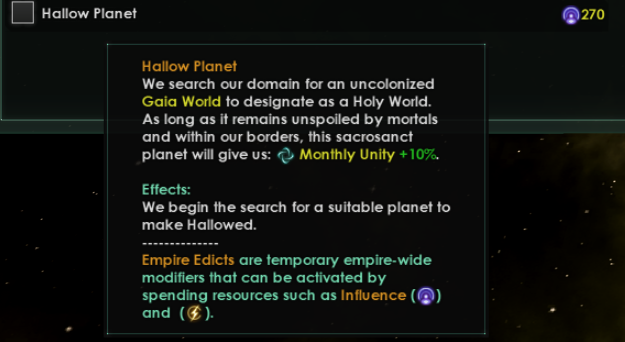 War Doctrines
In addition to other changes to traditions, finishing the Supremacy traditions now allows you to set a War Doctrine for your empire. War Doctrines give you additional customization and specialization regarding how you utilize your fleets. 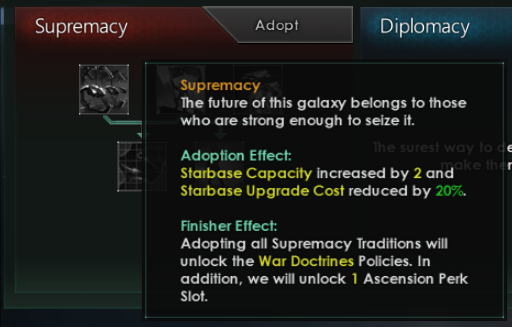 There are four different war doctrines with different strengths and weaknesses:
Defense in Depth: Defensive empires will have a bonus to their ship fire rate within their own borders
Hit and Run: This doctrine will increase the likelyhood of your ships making an emergency FTL in combat, and also reduce damage caused by emergency FTL
Rapid Deployment: Empires that choose to rely on quickly being able to respond to threats may choose this doctrine which increases sublight speed and ship weapon range
No retreat: Militarists and Gestalt Consciousness empires can choose to employ a doctrine of no retreat, increasing ship fire rate but removing the ability for individual ships to emergency FTL out of combat instead of being destroyed. 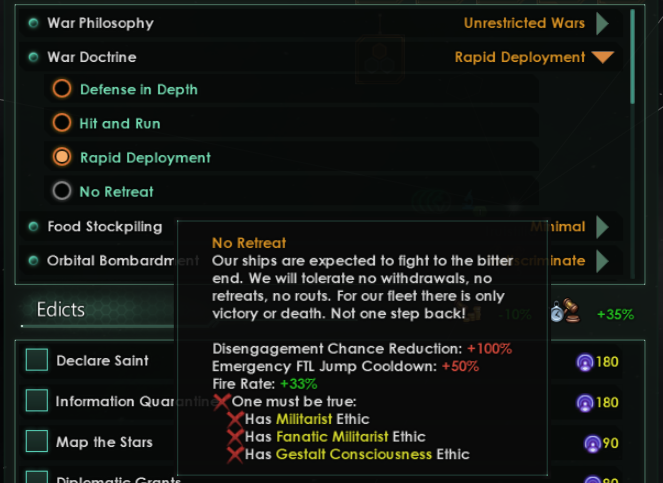 Psionic Awakening (Utopia)
Should you be playing a Psionic empire, introduced with Utopia, it will now be possible to help lesser species awaken their psionic potential. This works similar to Assimilation, where you can give another species the benefits of your chosen ascension path.

That's all for this week! Next week you will be able to read the full patch notes for the 2.0 'Cherryh' update!
Click to expand...

And I was just about to post in the where is today's dev diary thread....!


Loving the addition of a holy world.
Toggle signature
'Gentlemen, we're in the stickiest situation since Sticky the stick-insect got stuck on a sticky bun' - Capt. E. Blackadder.

The Empire needs YOU.. Come and post something nice about my AAR. The House of Habsburg. Victoria Revolutions VIPR01. Winner of the WritAAR of the Week Award 13 January 2008.

Its here thank the Gods!
Toggle signature
“No human being, when you understand his desires, is worthless. No one's life is nothing. Even the most evil of men and women, if you understand their hearts, had some generous act that redeems them, at least a little, from their sins.”

So the obvious question is: can we get CB to wage holy war on those who dare steal a desacrates our holy wolrds?

grekulf said:
Spiritualist empires will be able to designate an uncolonized Gaia World within their borders as a 'Holy World'. The Holy World will increase your empire's unity production as long as it remains uncolonized and within your borders.
Click to expand...

Good stuff for those 8 tile jokes.

Herr KaLeu said:
2.0 will be legend
Click to expand...

I'm waiting for it.

Great work, can’t wait until it is finally released!

But I have a question: In the last stream I saw that the Planetary Survey Corps tradition wasn’t changed. Is it still to be adjusted to the new mechanics in some way? Because as it is, the problem remains that it is disadvantageous to trade system data with others.

And one more question: Will the fix for the PD bug with missiles and fighters make it into 2.0?

Rapid deployement will be ideal for federations.

How does the new Holy World mechanic affect earning the Deus Vult achievement?

So can we terraform all planets we don't want to Gaia worlds and then hallow them, or is there a limit?

"Declare Saint" - now what is that?

Does the declare saint edict give stability?

nfmarque said:
Does the declare saint edict give stability?
Click to expand...

I love the icons. I waste so much time checking worlds.