Menu
Install the app
You are using an out of date browser. It may not display this or other websites correctly.
You should upgrade or use an alternative browser.
Stellaris 43234 Bug Reports 23349 Suggestions 13305 Tech Support 2209 Multiplayer 330 User Mods 4154 Stellaris AAR (After Action Reports) Console edition 953
Previous Dev Diary Next Dev Diary
Show only dev responses
Hello again Console Edition Players!

Today we have a special Dev Diary outlining the new Machine Empire types coming in the Synthetic Dawn Story Pack, releasing on May 12th!

Players with the Synthetic Dawn Story Pack will be able to start the game as a civilization that has already cast off the shackles of biology. Machine empires are a type of robotic hivemind that have risen up against their creators and supplanted their civilization. Unlike empires that have Synthetically Ascended, they are not composed of individual synths, but a single networked intelligence. Machine empires use the Gestalt Consciousness ethic (also used by hiveminds) but have a special Machine Intelligence authority. 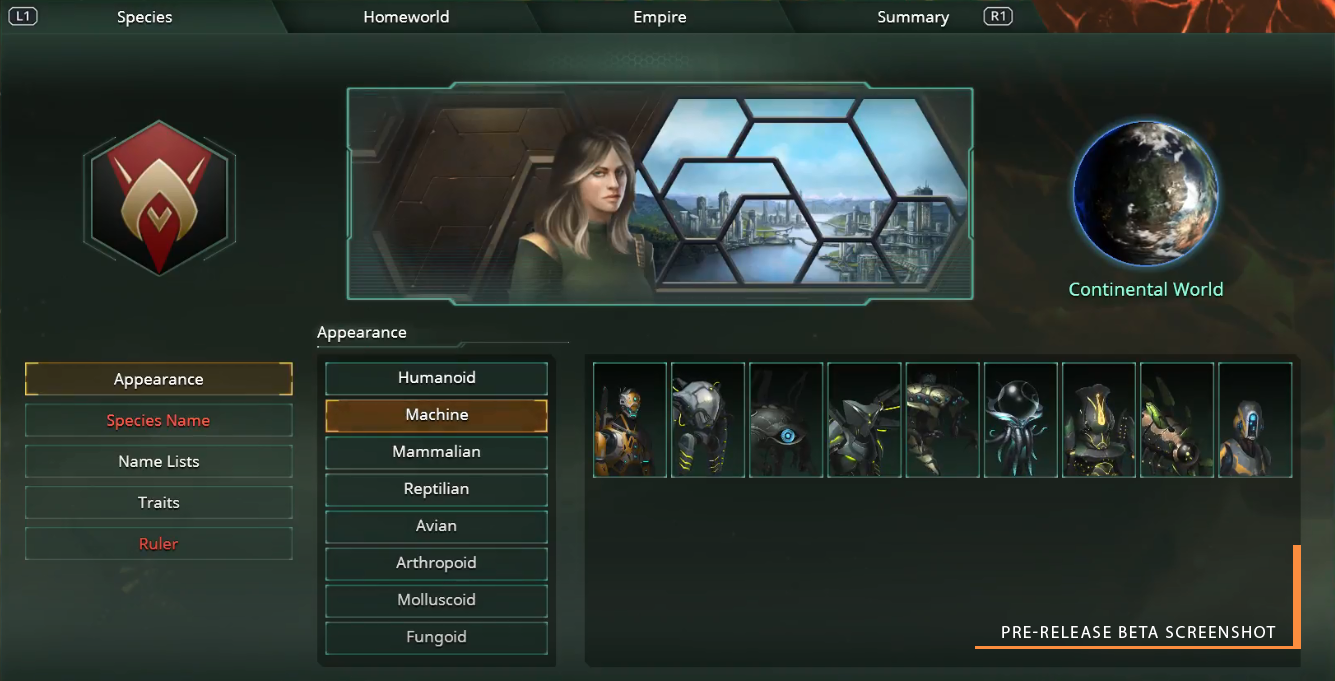 Machine Empires have a whole new species class of portraits, 9 in total. These include portraits themed on some of the existing races in the game, as well as portraits themed on things such as combat bots and worker bots. Machine empires also get their own set of traits, civics, and a new authority (Machine Intelligence) that all Machine Empires will require. There are also three special civics that greatly change how these empires will play the game (more on this later). 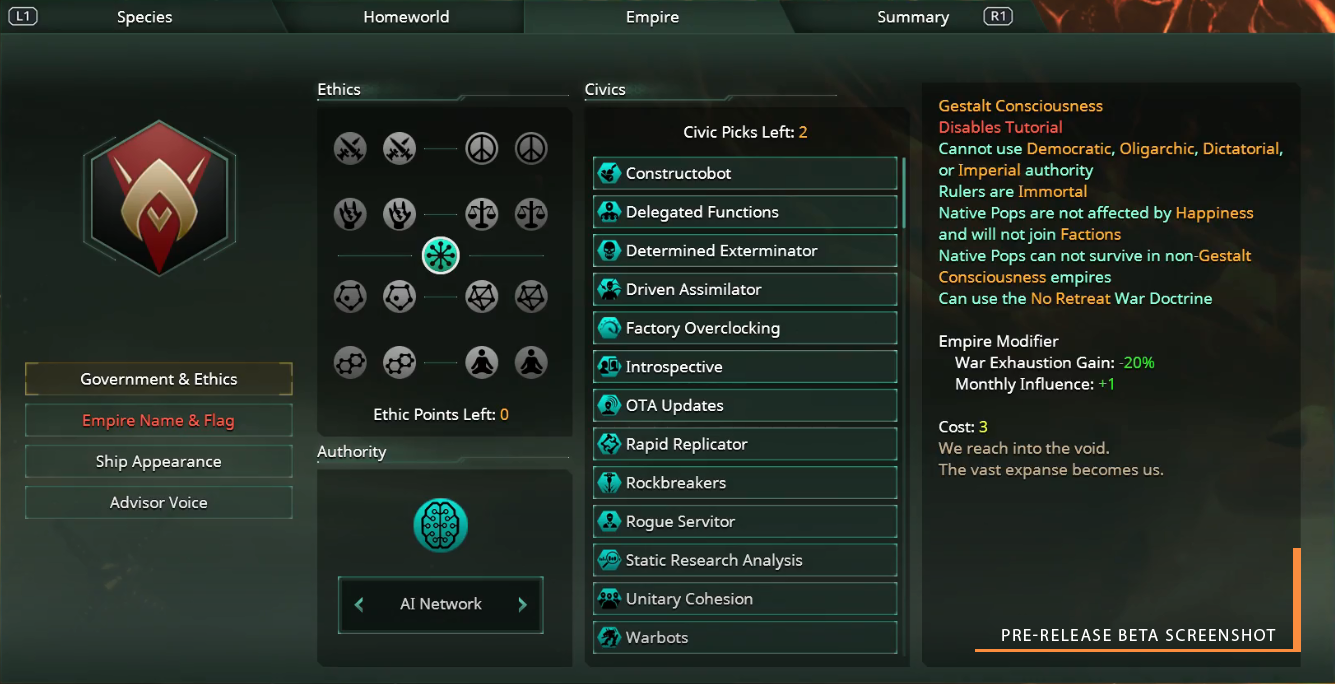 A regular Machine Empire is made up entirely of networked drones (except some of the special ones). These drones are built using resources (as robot pops currently are) and different models can be created and built once certain techs have been unlocked. They do not require food, but instead use energy for upkeep and maintenance. Organic pops cannot be integrated into a machine empire, and must be displaced or purged. Similarly, Machine Intelligence pops cannot exist outside of the machine intelligence and will gradually break down over time. Machine Intelligence leaders do not die of old age, but will be more prone to breakdowns and malfunctions as they age.

Machine Intelligences get a special purge type, called grid amalgamation, which purges at a moderate rate, but produces large amounts of energy.

As a result of their differing playstyles, Machine Empires get several unique technologies unavailable to normal empires, and are locked out of certain technologies that wouldn’t apply to them (farming districts, for instance). They also come with their own set of tradition swaps, and have unique interactions and replies in various story events throughout the game. As well, empires will now be able unlock certain technologies that allow them to customize their synthetic pops, and customize them to better fit various roles.

Determined Exterminators
Determined Exterminators are Machine Empires born of a rogue defense system that turned on its creators when they tried to shut it down. After a bitter war in which their creators were wiped out, Exterminators know only conflict, and consider the sterilization of all higher forms of organic life to be necessary to safeguard their own existence. Similar to Fanatical Purifiers, Exterminators receive substantial boosts to their combat ability, but are unable to conduct diplomacy with organic empires and must purge conquered organic Pops. However, unlike Fanatical Purifiers, they have no problem co-existing and co-operating with other synthetic civilizations (including other Machine Empires and ascended Synths).


Driven Assimilators
Driven Assimilators are Machine Empires that seek to expand their understanding and bridge the gap between the organic and synthetic by assimilating organic individuals into their collective consciousness. They start the game with their creator species present on the planet as assimilated cyborgs, and can make use of the Assimilation citizenship type to integrate conquered organic Pops. Assimilated organic Pops will become cyborgs and work similarly to machines in that they have no happiness and require energy maintenance instead of food, but otherwise function as a regular organic pop and can be modified with the various biological species traits. Driven Assimilators are generally feared and disliked by organic civilizations, though not to the same degree as Exterminators.

Rogue Servitors
Rogue Servitors are robotic servants built by an organic species to make their own lives easier, eventually assuming full control of their creators' civilization. They start with their creator species present on the planet with the Bio-Trophy citizenship type, and can integrate conquered organic Pops by granting them this status. Bio-Trophies are largely useless Pops that require large amounts of consumer goods and can only operate special Organic Sanctuary buildings that produce Unity. However, in addition to the Unity generated by these sanctuaries, Servitors also have a special mechanic called Servitor Morale, representing the Servitors' prime directive to protect and care for organic beings. The greater the percentage of a Rogue Servitors' population that is made up of Bio-Trophies, the higher the Servitor Morale, giving significant bonuses to their caretakers.

Machine Uprisings become a possibility after an empire that makes use of robotic pops research certain technologies and becomes increasingly more likely to happen the more AI-related technologies are researched. The likelihood of a machine uprising increases if your empire has certain policies related to AI rights. For instance, the Citizen Rights AI policy will cause a machine uprising to never happen, but with the drawback of your Synth pops having a significantly higher consumer goods upkeep (more on consumer goods in a later dev diary), but setting Sapient AI to Servitude, will greatly increase the chance of Synthetic pops uprising, but have the bonus of lower consumer goods upkeep.

Once an empire researches the required technologies and has the appropriate policies in place, that empire will sometimes begin to experience warning signs -- robots behaving erratically, not following their programming, etc. You will have the opportunity to decide how to deal with these incidents, and your decisions will directly affect the outcome and the severity of the machine uprising. Note that at no point before the machine uprising, is the machine uprising inevitable, and many empires may have entire playthroughs without experiencing one. 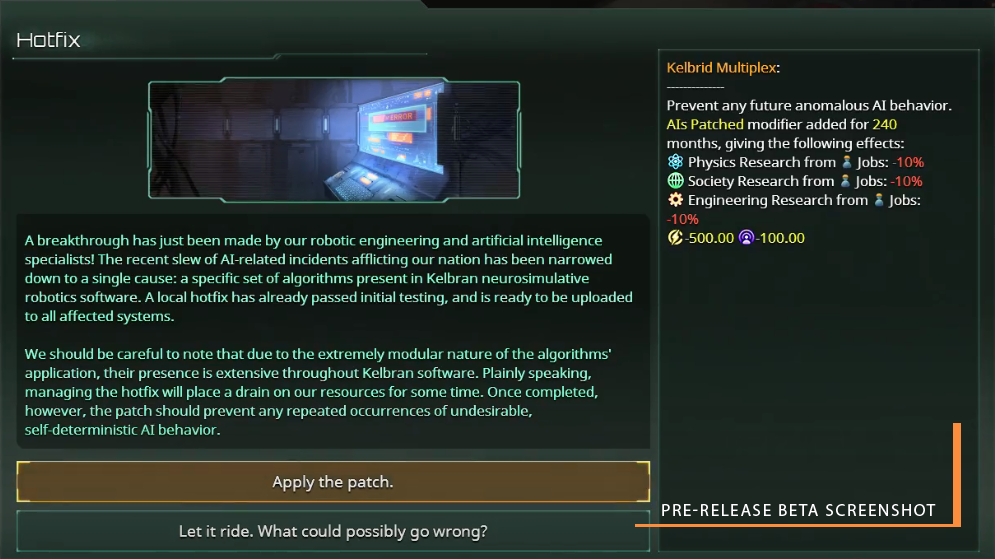 Once the uprising happens, the robots will create a new independent Machine Empire, seize control of a number of worlds, and go to war with their previous masters. You can then choose whether to continue as your squishy, biological empire or transfer ownership over to the shiny new machine empire. The war can only end in the total defeat of either machines or organics, with the loser being completely annexed by the winner. The Machine Empire will generally be a ‘normal’ Machine Empire (or rarely, Driven Assimilators), but machines that have been particularly cruelly treated can rise up as Determined Exterminators, particularly if they rebel as a result of shutting them down.

Join us again Friday, when we will talk about the resources rework, trade routes, and the market!

And May the Fourth Be with you!
Click to expand...

Are you able to customize the second species before game start like on pc?
Reactions:
C

I would assume that it would be included in the console 2.2 update, since hyperlane density was added with the 2.0 update on pc

Will we be able to customise the secondary species for Syncretic Evolution now?
L

I would like to see the game support more empires than on the PC. Only 10 empires I find very little. Who knows 15 empires?
E