Jump to latest Follow Reply
Menu
Install the app
You are using an out of date browser. It may not display this or other websites correctly.
You should upgrade or use an alternative browser.
Stellaris 44877 Bug Reports 24600 Suggestions 14679 Tech Support 2406 Multiplayer 348 User Mods 4289 Stellaris AAR (After Action Reports) Console edition 1045
Previous dev diary Next dev diary
Show only dev responses
Hello Console Players!

We have a really long dev diary today, just going to take the time to remind you these things may not be exactly as they might appear in the end-product, have not-final numbers and potentially unfinalized UI.

Something we haven’t really explained yet is Pop Jobs, and while DD#2 explained where Pop Jobs come from, there are some nuances that everyone should be aware of. Pop jobs come in two types, capped, or the normal type of jobs are provided by buildings and districts, and once there are no more jobs available, these pops become unemployed (more on this later). However there is another type of Pop job; uncapped jobs. These jobs are given generally by species and/or citizenship rights. For example, a pop who’s species is set to livestock will work in a special livestock job, which requires no upkeep, very little housing (again, more on housing later) and produces food each month.

Pops will automatically fill empty jobs that they are capable of holding, based on their species traits and strata (...again, more later). For example, an industrious pop will take a mining job from a non-industrious pop of the same strata. Players can also increase or decrease the priority of specific jobs, ensuring some jobs are filled before others, but there is no more manual assignment of a specific pop to a specific job.

In addition to resource production, there is also a wide variety of Jobs related to administration and tending to the needs of other Pops. For example, Clerks are service industry workers that produce a small number of luxury goods and increase the Trade Value of the planet as a result of domestic economic activity in your cities, while Enforcers are your police, working to suppress dissent and reduce Crime on the planet. Some Jobs are rarer than others - Crystal Miner Jobs are only possible on planets that have Rare Crystal deposits, and some anomalies add unique planetary features that create Jobs that might only exist on that particular planet. Some Empires, such as Hive Minds and Machine Empires, also have their own special Jobs that are not available to others.

Whether a pop is employed or not, the vast majority of pops will belong to a Stratum, representing a social class of your population. The exact stratas vary depending on the type of empire, however as a rule non-Gestalt pops will usually be divided into three categories:

There are other strata however, for example, enslaved pops. Slave pops require very little consumer goods, however, are only allowed to hold resource production jobs. Higher strata jobs are always filled first from their own strata and then from the strata below their strata.

For example, if a building is built that creates a ruler job, a specialist pop will be promoted to the ruler strata (if their species rights allow it), and if there are no unemployed specialists, a worker pop will be promoted to a specialist (again, if allowed by species rights). This leaves one worker job free, providing there are no unemployed worker pops. If you were then to remove that building, the ruler pop would become unemployed. However, pops that have been promoted to a higher strata will refuse (for a time) to take a lower strata job, and will become unhappy and have a negative effect on stability for the planet. Certain traditions can make this process go faster.

With the removal of the tile system, we have introduced Housing. Housing represents the living space required for one pop to live, or in the case of robotic pops, the support and storage infrastructure they require. The base housing required for 1 pop is 1 housing, however certain factors (traits, strata, job, etc) can either increase or decrease this value. Housing is not a hard limit, but a soft cap, and planets that are over their housing limit will continue to grow pops, but receive penalties including reduced pop growth and negative effects on Stability/Happiness. 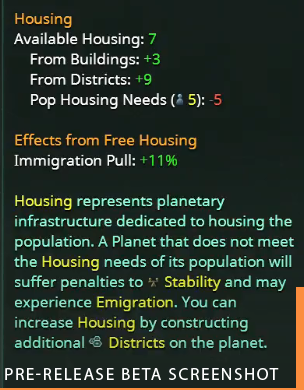 In the 2.2 update, Planetary Stability is one of the most important factors for determining productivity on a planet. Planetary Stability is influenced by a number of factors, including Happiness, Housing, Amenities and Crime. Stability ranges from 0% to 100%, with a base level of 50%. Above 50%, and planets will receive bonuses to resource production and immigration pull, but below 50% will experience penalties to resource production and increased emigration push. Below a certain threshold, unrest events such as hunger strikes and terrorist bombings may start to occur, which can lower stability enough that an armed revolt may start after a time.

Pop happiness is another major factor in determining planet stability. Each planet that contains at least one pop with free will has a Pop Approval Rating, that is the average happiness of the Pops, modified by their political power. Each pop has a political power value based on their strata and living conditions. For example, a Ruler pop living in a stratified economy will have an immense degree of political power, and their happiness may be more important than the happiness of a dozen worker pops. However, pops with no political power can still drag down your approval rating, so a planet with a vast mass of angry slaves will need some rulers to keep them in line. On a pop level, happiness no longer affects your pops productivity, so to ensure your planets are productive you now only need to make sure your Stability level is high. Individual Pop Happiness is not entirely without effect though, as the happiness of a Pop determines how likely it is to adopt your governing ethics, and also affects how much Crime it generates (see below for further details). 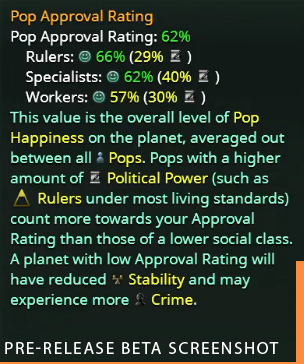 Amenities represent the infrastructure, facilities and jobs required to cater to the day-to-day needs of your population. Excess amenities will cause increased Pop Happiness, while a lack of amenities will decrease Pop Happiness. Capital buildings and ruler jobs produce a small amount of amenities and may cover the needs of a fledgling colony, however highly urbanized planets will need to dedicate at least some of their infrastructure and population to amenities-producing buildings and jobs (such as entertainers) to keep the population happy.

Something else that we wanted to achieve with the new system was to create the potential for social and political unrest without necessarily having it take the form of a direct penalty or revolt, especially on heavily populated worlds. Crime is a value generated by virtually all Pops with free will, and can vary between 0 and 100% on a planet. Happy Pops produce less crime, while unhappy Pops produce more crime, but only Pops at a perfect 100% happiness produce no crime at all.

Crime has no actual direct penalty, but instead may result in events such as smuggler rings or organized crime taking root on the planet. These events and conditions are generally detrimental, but may also open up certain beneficial opportunities and decisions that would not be available on a planet with perfect law and order. Nonetheless, a very high level of Crime is generally something to be avoided, as crime can lower stability and also result in Pops leaving their ordinary jobs and moving into special Crime jobs that appear on the planet and which take resources away from your empire rather than producing them. To combat Crime, you can build buildings such as Precinct Districts that create crime-suppressing Enforcer jobs. In general, empires that rely on repression and inequality to keep their Pops in line will need to employ more Enforcers. 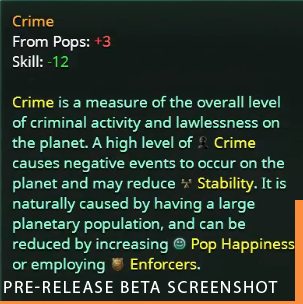 Whew! Well that’s it for today folks! It’s going to be an exciting week for Stellaris: Console Edition, next week we will have a special Dev Diary on Monday highlighting some of the unique empire types in the Synthetic Dawn Story Pack. Keep your eyes peeled everyone and have a great weekend!

Thank you for that info.

And thanks for the surprising info this week with a release date. To be honest, a lot sooner than I expected. And that's a good thing!

I still would like to ask a few questions.
1. Will be able to speed the game up at all beyond our current rate of speed? This is the one thing that even Aspec found frustrating when playing console.
2. Is there/will there be a war option that will prevent the destruction of mining stations/research stations. As it is a huge pet pev as I don't like attacking civilian infrastructure when I am roleplaying the good guys. It seems to be a very not good guy thing to do.
3. Things come better in threes and if I seem like I am backing off from one question with a humourous quip I hope maybe just maybe even if it is in vain that this questions may be answered.

At any rate once again thanks for your time and a lot of the Stellaris console community that I see in the clubs love these updates even if they're not expressing their love in here.
Reactions:
A

Thank you for an informative DD.

I think with all the upcoming changes the early game won't be feeling slow or quiet anymore, with all these mechanics to be mindful of.

I frequent the Xbox One clubs daily and I see a fair amount of enthusiasm amongst players about Stellaris CE.

I wish Paradox every success.
N

Caladors said:
I still would like to ask a few questions.
1. Will be able to speed the game up at all beyond our current rate of speed? This is the one thing that even Aspec found frustrating when playing console.
2. Is there/will there be a war option that will prevent the destruction of mining stations/research stations. As it is a huge pet pev as I don't like attacking civilian infrastructure when I am roleplaying the good guys. It seems to be a very not good guy thing to do.
3. Things come better in threes and if I seem like I am backing off from one question with a humourous quip I hope maybe just maybe even if it is in vain that this questions may be answered.
Click to expand...

1. No we have processors that cannot handle that kind of stress, maybe next gen consoles; maybe.

I don't see the planet designation thing. Forge world, tech world etc. Is it not available in 2.2?
E

Probably in the dlc dev blog on monday
N

AC4above said:
I don't see the planet designation thing. Forge world, tech world etc. Is it not available in 2.2?
Click to expand...

It's under Summery; just the only example in the one photo we are given is the capital, so obviously it will say empire capital.
Reactions:

NogardNys said:
It's under Summery; just the only example in the one photo we are given is the capital, so obviously it will say empire capital.
Click to expand...

You're right. I see it now. I wonder if we can manually choose it.

AC4above said:
You're right. I see it now. I wonder if we can manually choose it.
Click to expand...