Menu
Install the app
You are using an out of date browser. It may not display this or other websites correctly.
You should upgrade or use an alternative browser.
Stellaris 43262 Bug Reports 23359 Suggestions 13325 Tech Support 2208 Multiplayer 330 User Mods 4154 Stellaris AAR (After Action Reports) Console edition 960
Previous Dev Diary Next Dev Diary 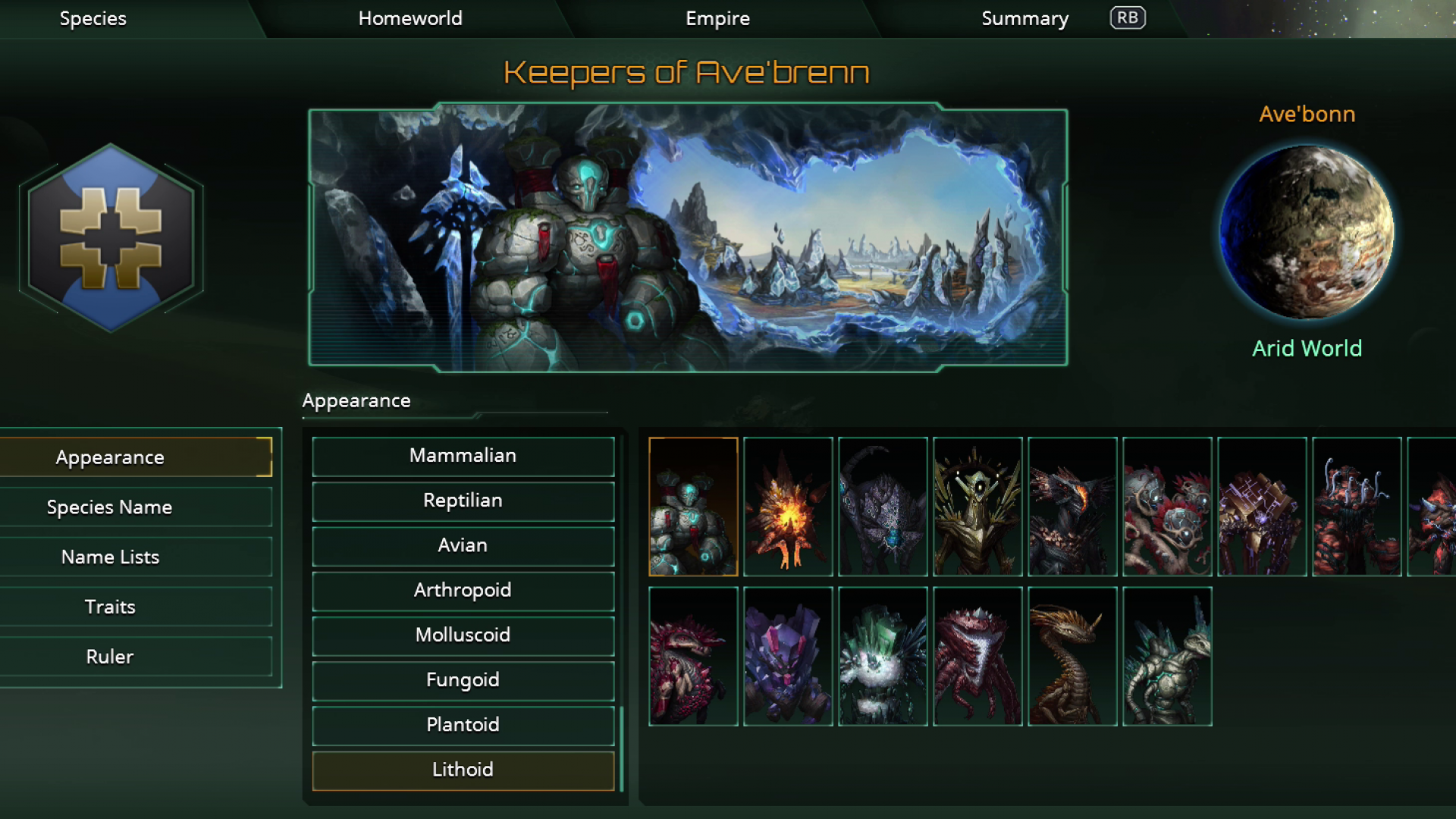 In today’s dev diary we’ll be talking about the paid features coming in the Lithoids Species Pack. While the species pack will be for shale individually, this release also marks the conclusion of Expansion Pass Three. This Expansion Pass has lasted just over six months, and we truly appreciate our Community’s patience and understanding while we worked on the Verne Update. The future looks bright for Stellaris: Console Edition, and we can’t wait to show you what’s coming next. But for now, on to the Lithoids!

The Lithoids are a set of 15 silicon-based and rock-inspired portraits, plus a unique rock-inspired machine portrait for those of you who have the Synthetic Dawn Story Pack.

As well, the Lithoids Species Pack comes with a new Lithoid Advisor voice, that may or may not be on a roll in the pun department.

Lithoids also comes with a beautiful rock-inspired shipset, these ships will also take the primary colour of your Empire, giving you the possibility of making very pretty fleets indeed.

All of the Lithoids portraits get the “Lithoid” trait automatically, and consume minerals instead of food. They also get a significantly reduced growth rate (-25%), but are also significantly longer-lived (+50 years), as well as +50% Habitability on all planet types, and +50% army health. Lithoid homeworlds also start with four Lithoid Monoliths that can be cleared for a mineral cost, which creates a pop of their species.

They can also choose one of three mutually exclusive Lithoid-specific traits, Scintillating Skin, Gaseous Byproducts, and Volatile Excretions, choosing one of these traits will allow your species to produce 0.01 of a specific rare resource per month, per pop that has the trait.

Your species starts with a massive crater on your homeworld, and the ability to build asteroid colony ships. These colony ships travel at great speed but damage their target planet on arrival. Colonizing with an asteroid colony ship will also result in 1-4 buried Lithoids blockers created on the planet, which when cleared create a new lithoid pop of your species.

For those players who also own Utopia, this Civic replaces the Devouring Swarm Civic for Lithoid Hiveminds. While they will still process pops into a nutritive paste for Bio-Reactors, their hunger is a little more ambitious, and once off their homeworld will get an additional planetary decision to Consume World. Using this Planetary Decision has a random outcome, and may produce Minerals, Alloys, or create a pop of your species on the world that was consumed.

Using Consume World also adds devastation to the target planet and creates two Lithoid Devastation tile blockers, that a Terravore Empire cannot remove. Terravores are also blocked from Terraforming (and by extension, creating Hive Worlds). Other Empires are able to clean up the mess left behind by a Lithoid Empire, though it requires a considerable investment of time/resources.

Thanks for reading, and we hope you all enjoy this really gneiss addition to Stellaris: Console Edition! Don’t forget to watch our Lithoids Species Pack release stream Thursday, March 25th at 10:30 AM CET (09:30 AM UK, 5:30 AM ET, 2:30 AM PDT).
Reactions:

They should have a ability to colonize some asteroid and that asteroid could travel around the system galaxy. Would be crazy.

Aceparadox said:
the species pack will be for shale individually,
Click to expand...

expect more on the 25th
F

i’m not stoned enough to appreciate these puns
Reactions: