Jump to latest Follow Reply
Menu
Install the app
You are using an out of date browser. It may not display this or other websites correctly.
You should upgrade or use an alternative browser.
Hearts of Iron IV 40713 Bug Reports 11867 After Action Reports (AAR)
Previous dev diary Next dev diary
Show only dev responses 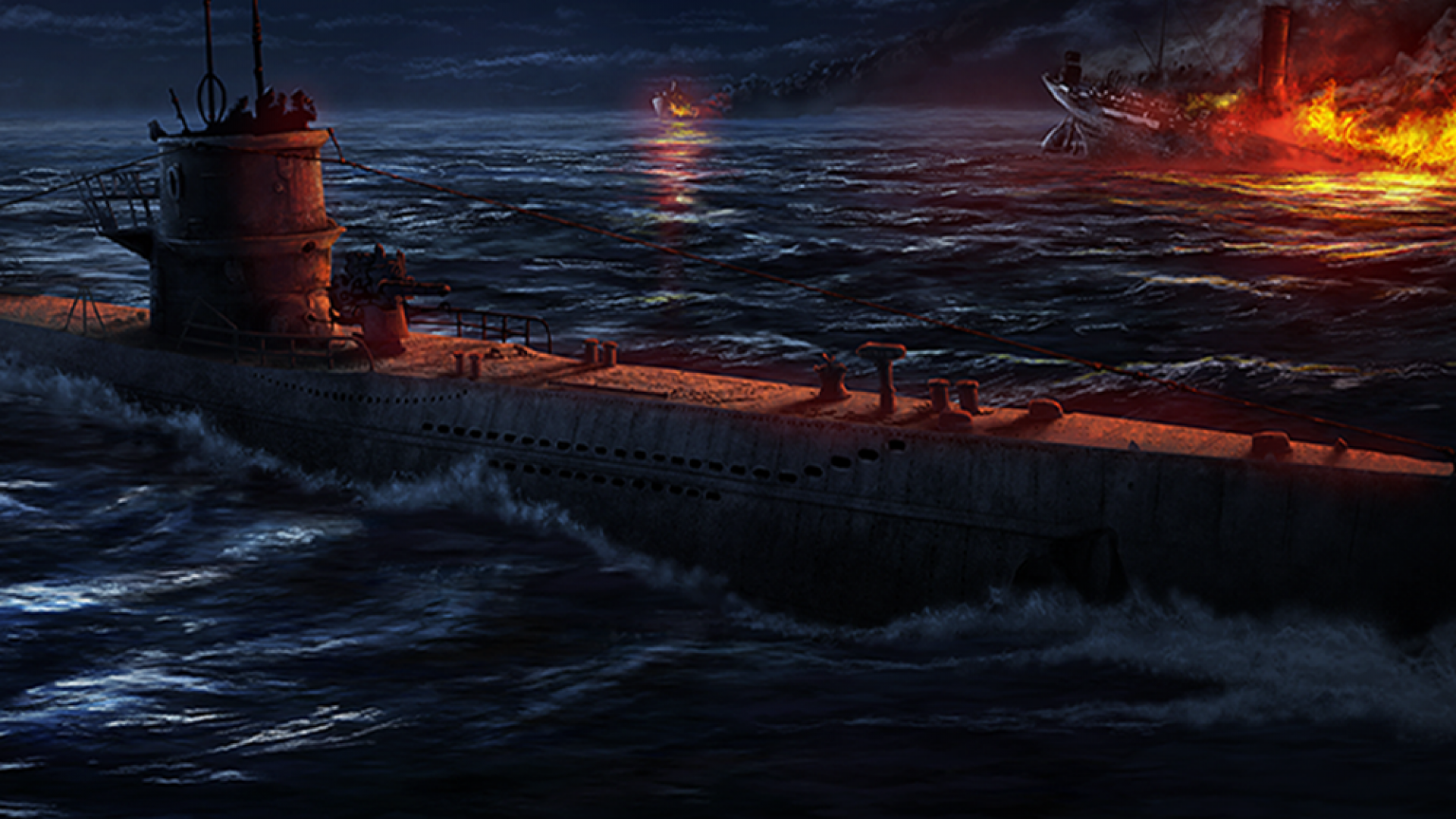 Hello there, C0RAX here. Welcome aboard to my dev corner, in this thread I'll be going over the core introduction of the planned changes to naval gameplay. 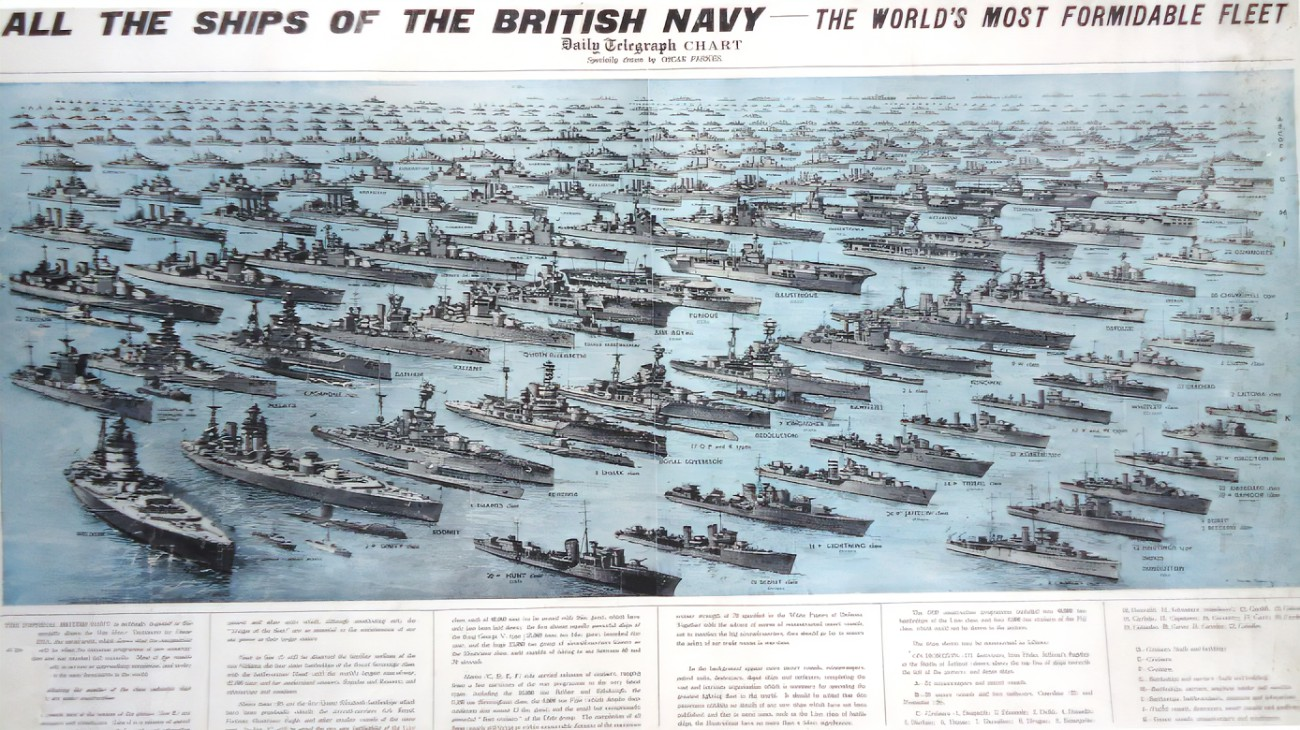 The most obvious change is our first port of call today, this is the tech tree. There are a number of changes here that will be explained in further detail further to the aft of the dev corner.

So firstly the naval tech tree has been split into 2, the naval tab contains hulls and tech directly linked to hulls. Let's take a look at what that looks like. 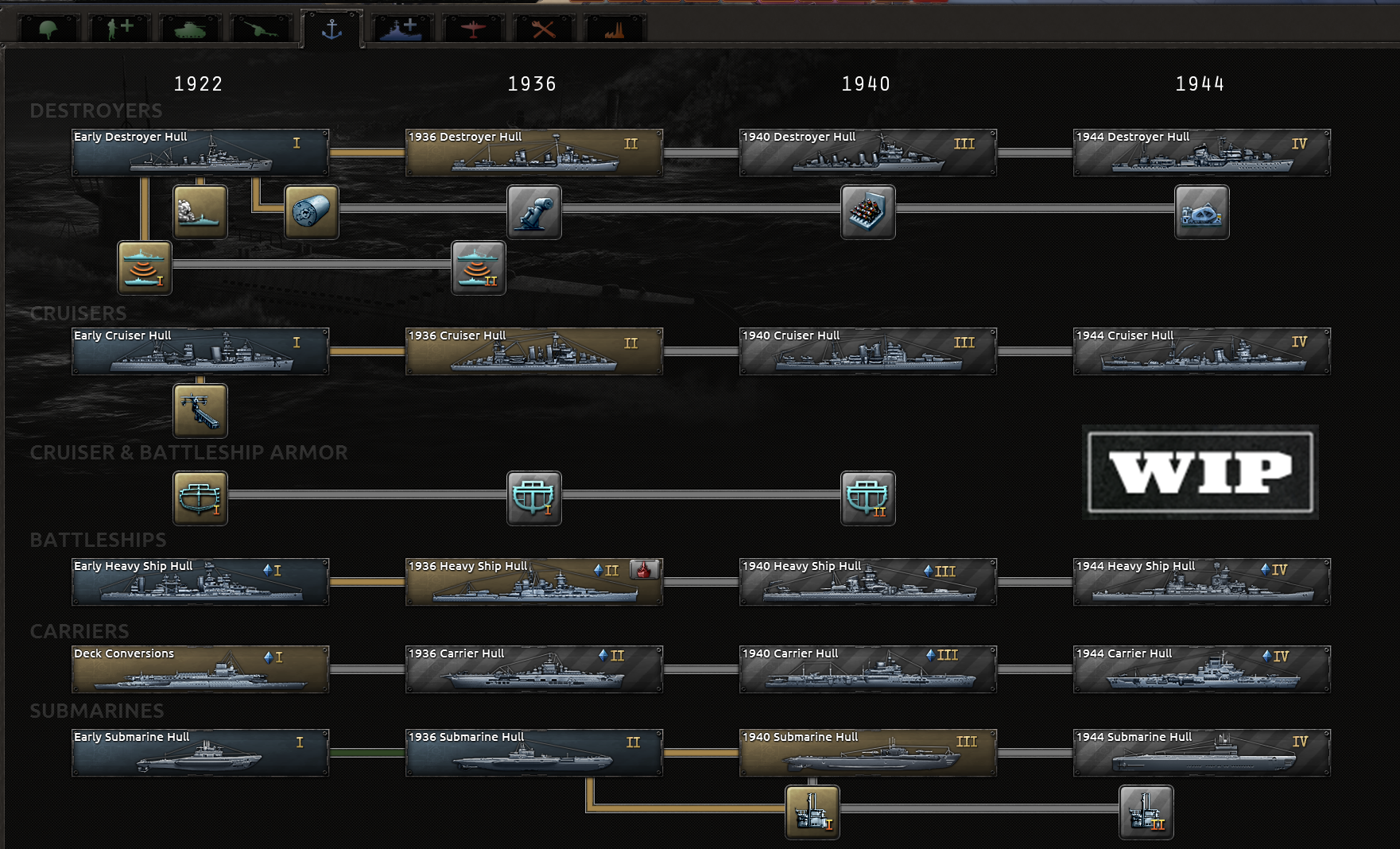 As you can see it's much more concise than before, armor techs have been combined so each level will unlock both heavy and cruiser armours and are not linked to any specific hulls. SH armor still remains part of the super heavy battleship.

Moving on to the new “Naval Support” tab. 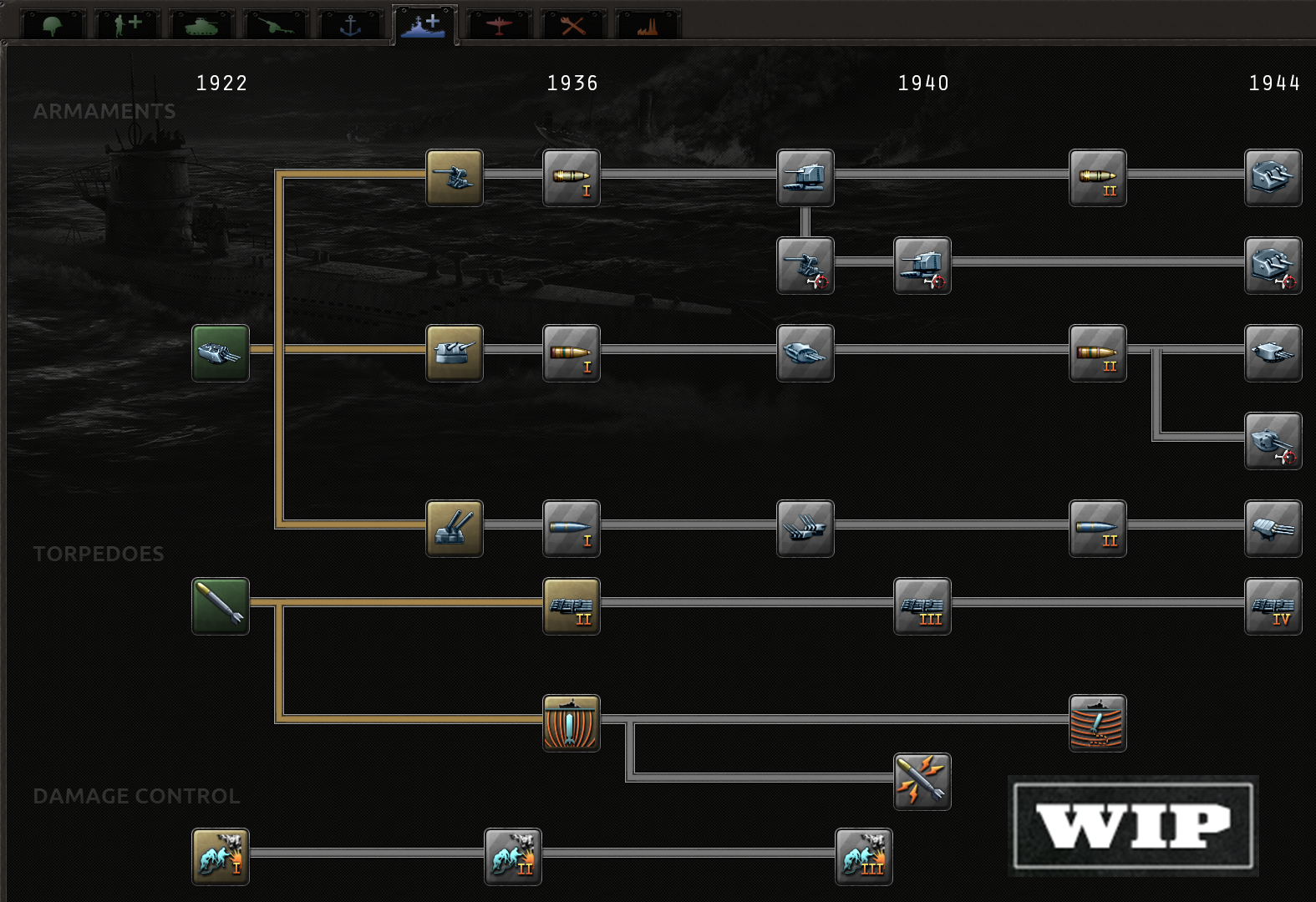 Here you will see quite a difference from the old tech tree. Gone are the secondary battery techs as they are now research via the medium gun techs 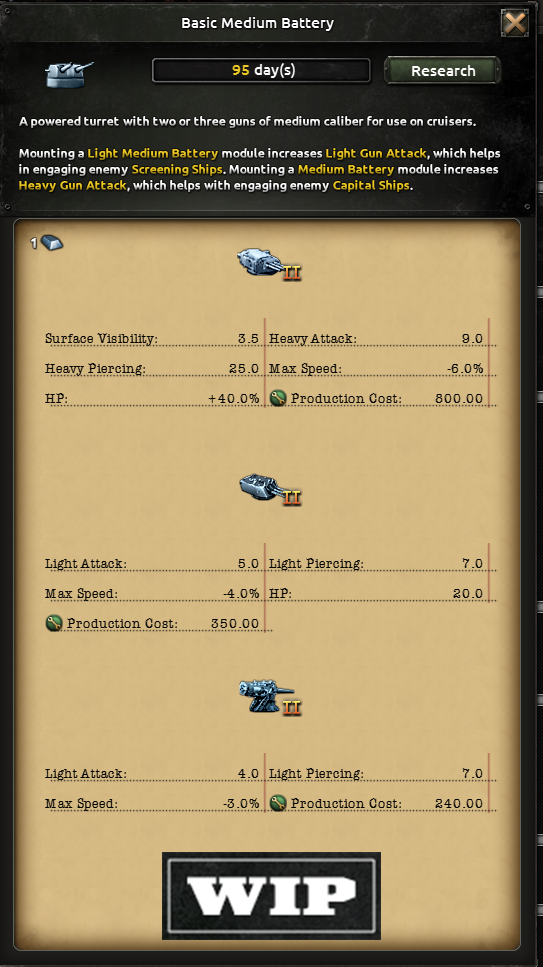 Additionally the naval shell upgrades are now part of the gun lines acting as an intermediary tech between new modules. But don't worry about having to research more techs, XP reductions are gone but base research times are down.

The current values for the dual purpose batteries are not final and are currently aligned with their non AA equivalents. 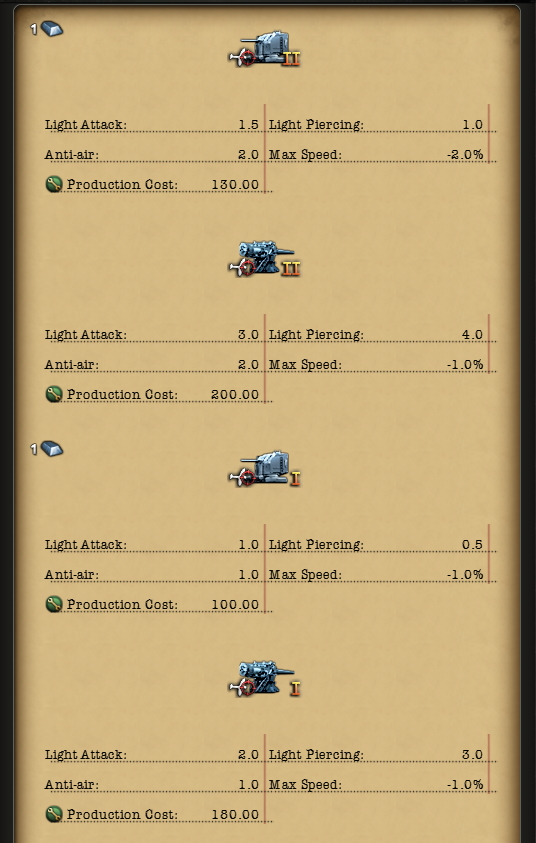 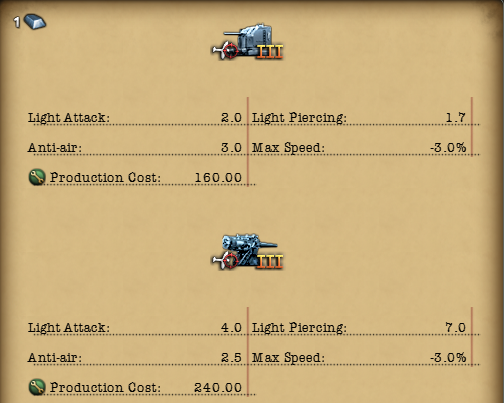 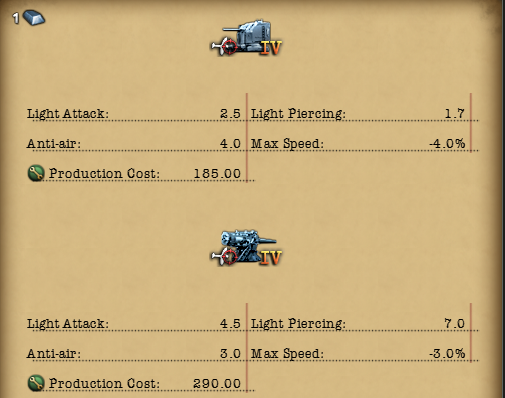 Finally we have the 1944 Advanced medium dual purpose battery which packs a punch both to ships and planes, which should you reach it could wreak havoc for enemy aircraft and destroyers alike. 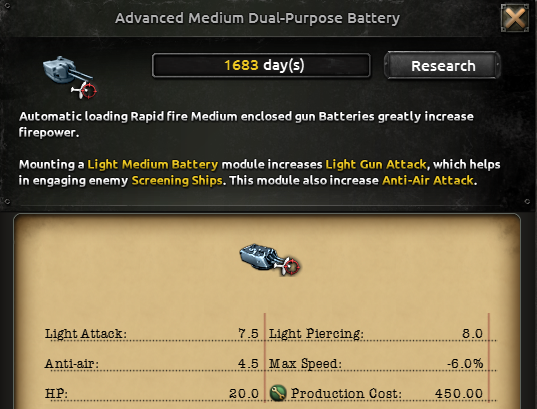 Quick primer on hit profile in case you don't know what they are. A Hit profile is the calculation used to determine how easy it is to hit a ship. This hit profile is then divided by the accuracy of the weapon type a ship is firing (10 * (Hitprofile/weaponaccuracy)^2).

Any other effects that affect hit chances such as weather/time of day are applied to the final value. Currently the live game calculation for a hit profile is the ( (visibility * 100) / speed) .

So a ship with a high hit profile will be easier to hit than one with a small hit profile.

A change to the hit profile calculation is aimed to reduce the impact of speed on hit chance and should flatten the effect of speed for much slower ships. The current but not final working formula is: 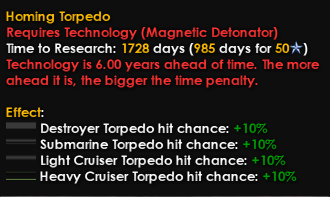 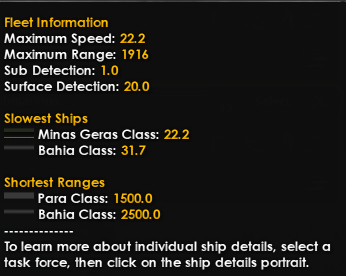 First joining an ongoing battle was very painful and making strike forces much less useful this should be much less of an issue with much lower and shorter lived penalties for positioning.

Additionally SUPREMACY_PER_SHIP_BASE has been reduced from 100>75 so that IC and manpower have a greater impact on naval supremacy.
MAX_POSITIONING_PENALTY_FROM_HIGHER_SHIP_RATIO Has been increase from50% to 75%.
finally convoys no longer count as carriers for screening but instead need 0.5 screens (rounding up) per convoy.

The ship designer has some of the most major changes to existing ships and modules. Let's go through them by groupings..

Firstly I want to say that you can no longer have both medium cruiser and light cruiser guns on the same design, fitting both will invalidate the design. This will eliminate one of the largest exploits in current ship design and should prevent ships being unintentionally protected by screening.

Now we will get into some gritty details of the current value changes for the rebalance.

Changes to speed,reliability and Production cost. 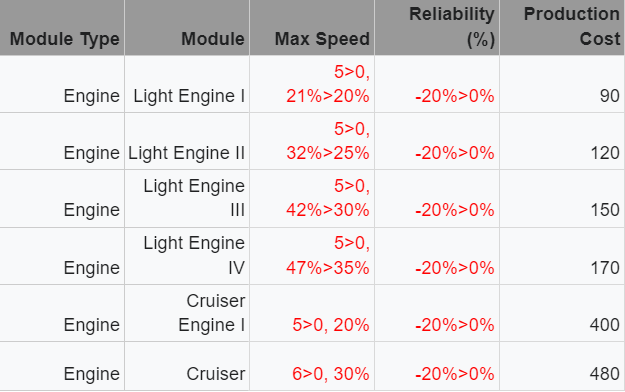 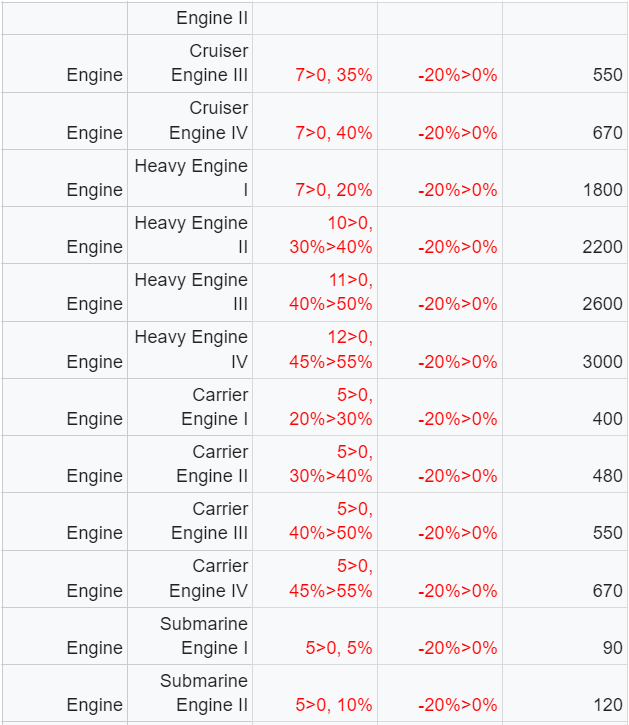 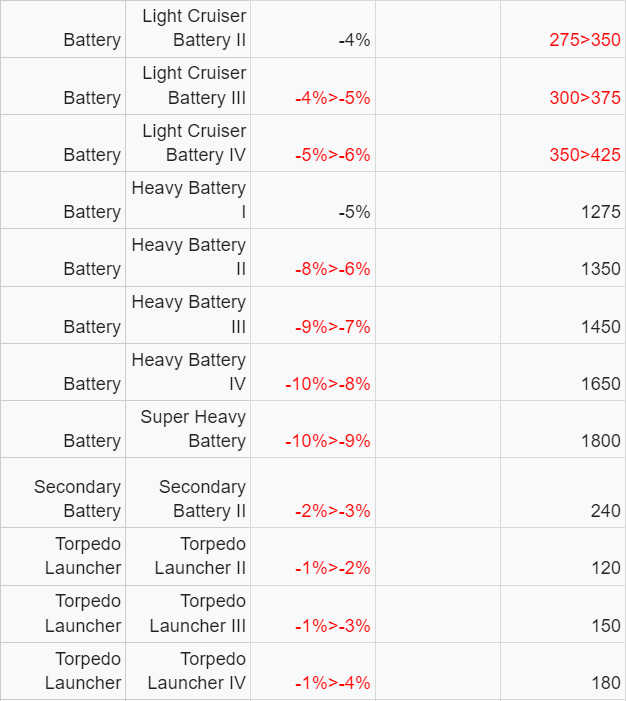 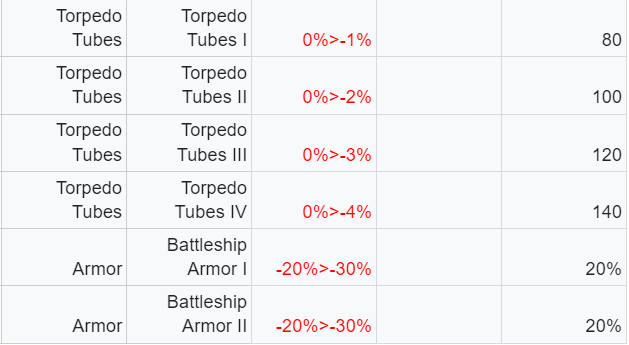 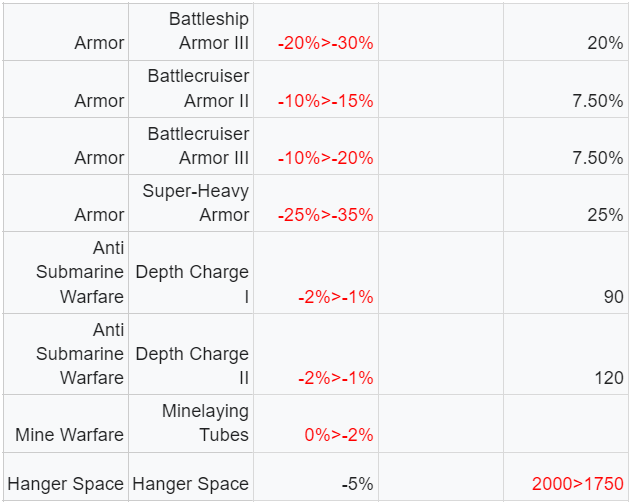 Changes to speed for hulls 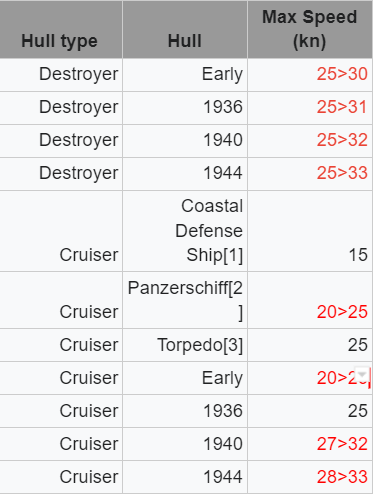 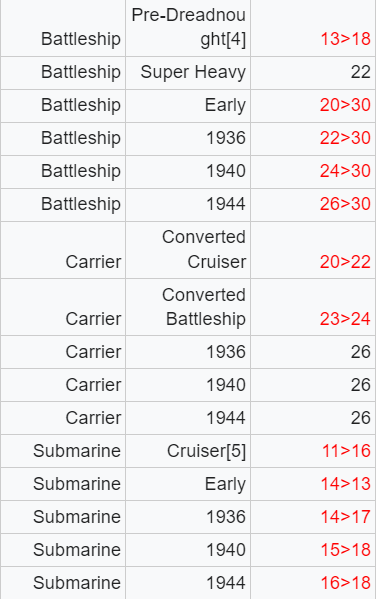 On speed it should be much harder to get 40kt ships now - faster ships hover around ~35kt with slower ships being in the 30kt range. Some older ships and submarines remain well below 30kt and will need upgrading if you want their speed to match modern ships. 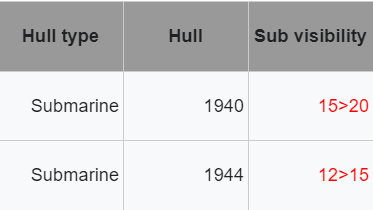 Now these are the normal changes to modules and ships, but that's not all we have some new modifiers that are replacing or adding to existing modules too. 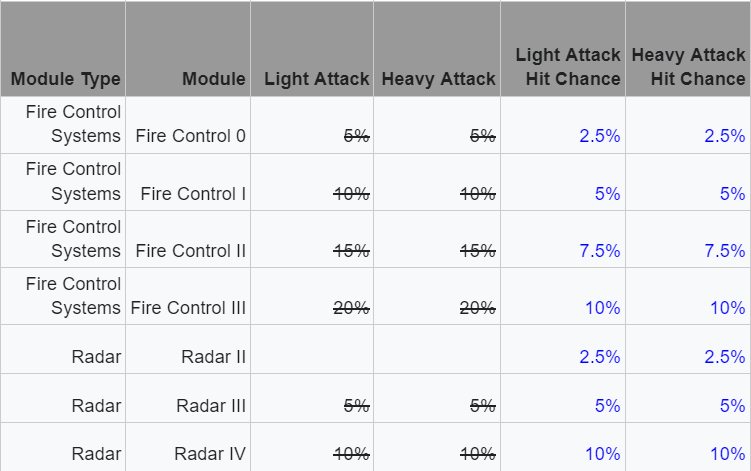 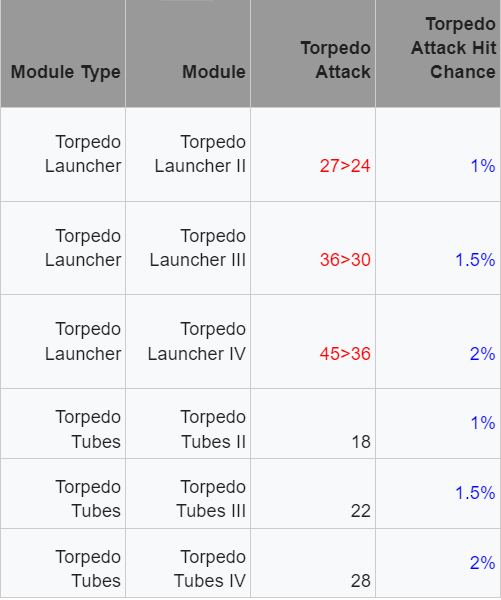 In addition to the new modifiers below for armor a review of armor values and piercing is planned, but I don’t have a completed set of changes for that yet so you will have to wait for future announcements on how that looks. 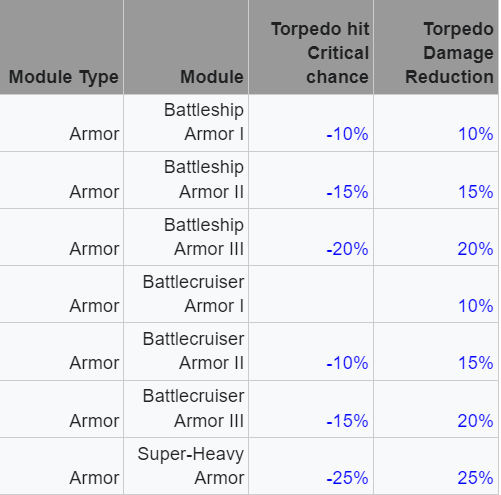 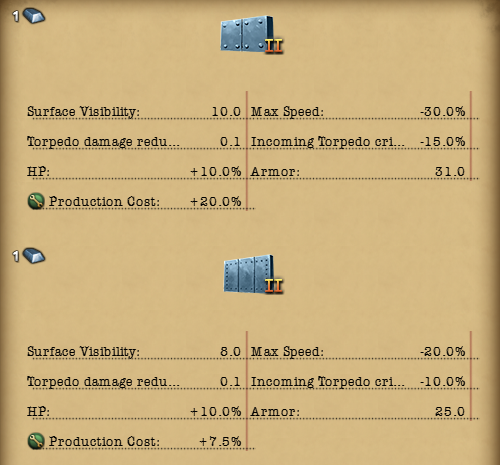 As always If you have any questions feel free to ask here.
Reactions:

One issue that many worry will remain is "deathstacking", or putting all ships into a big blob, will remain the foremost strategy, especially against the dispersed task forces of the AI. Is anything planned to ameliorate this issue?

this has been done but I somehow missed it from the DC (I will edit it in) MAX_POSITIONING_PENALTY_FROM_HIGHER_SHIP_RATIO Has been increase from 50% to 75%. this will make death stacking not quite so good from our tests so far.


Big_Smokes said:
Is the new speed calculation also going to have a significant effect on fast ships, or will the hit chance on them stay more or less the same? (Essentially: Are destroyers easier to hit now, or not?)
Click to expand...

Right now it makes destroyers and carriers very slightly easier to hit (like 0.01%-0.05%) but slower cruisers and battleships are getting 2%-5% lower chance to hit so it is simply flattening out those high chance to hit situations to be less extreme.


Ethereld said:
As part of this naval "rework" it is planned to make changes on the naval OOB of different countries?
Click to expand...

it is something I want to do but no promises on the extent.

My obvious question is why you keep impying SH BB would remain a ship rather than an immobile artillery platform?

Does a naval rework imply an italian focus tree rework? (Sorry i really had to ask this)
Reactions:
A

One issue that many worry will remain is "deathstacking", or putting all ships into a big blob, will remain the foremost strategy, especially against the dispersed task forces of the AI. Is anything planned to ameliorate this issue?

This was pretty in the weeds for someone like me who still doesn't quite understand how naval combat works. What's the TL;DR for if/how this will change things from "just build a bajillion subs."
Reactions:

The only country that I can see here is Brazil and I refuse to think it's not intentional.
Reactions:

Saevynn said:
The only country that I can see here is Brazil and I refuse to think it's not intentional.
Click to expand...

I swear, if they do a Brazilian focus tree before Italy, I will sue them!
Toggle signature
My first AAR: ITALY'S TEN YEARS WAR - halted due a sudden crash into a savegame :sad:

It would be good to give a spotting bonus based on the size of the spotting force. It's silly that one ship searches as well as a thousand ships.
Reactions:

If I remember rightly, spotting values are an average for all the ships in each task force. This has never made sense to me: if your aircraft carrier or battleship has a radar good enough to spot the enemy, then there's no reason to expect every destroyer (and submarine!) to have a state-of-the-art radar too. Is there any chance of making task force detection based on the highest value (or at least an average weighted towards the highest value), please?
Toggle signature
Seek Truth From Facts or in Mandarin: 实事求是
Reactions:

2) Is anything planned vs submarine / Naval bomber meta (which are a lot more cost-efficient than surface fleet) ? Maybe prevent submarines from generating naval supremacy in a tile would be an idea ?

3) Will the naval AI be improved? It painfully can't be a threat to a human player right now...
Reactions:

Is the new speed calculation also going to have a significant effect on fast ships, or will the hit chance on them stay more or less the same? (Essentially: Are destroyers easier to hit now, or not?)
Toggle signature
Twitch - twitch.tv/bigschmokes
Youtube - bigschmokes
Reactions:

Hello C0rax and thanks for the astonishing info!

Could I ask you if there is some surprises programmed for the 06 of June?

You know for Hoi4 fun is a sort of Christmas it self.
Reactions:

As part of this naval "rework" it is planned to make changes on the naval OOB of different countries?
Reactions:

Really good update, great to hear some of the WIP changes. I'm glad that Paradox feels OK sharing features as they're being developed.

Will we be able to save ship design templates across games? It would be a good QOL to not have to recreate common naval templates in every single game
Reactions:

So would your draft hit chance be

Teo41 said:
I swear, if they do a Brazilian focus tree before Italy, I will sue them!
Click to expand...

Well it is called LATIN America for something so… maybe both?
Reactions:
5

So umm will the historical US Navy task force be viable for single player?
Reactions:
5

Teo41 said:
I swear, if they do a Brazilian focus tree before Italy, I will sue them!
Click to expand...

I mean smoking snakes is kind of an obvious pairing for an Italy based rework.
Reactions:

definitely didn t expect them to touch navy for years. overall, it looks neat! (aaand now i understand why air will be made into an accaptable tier without too many good changes)
Toggle signature
me annoying people
1: supplies getting harassed by allies
2: some words about the clone army
3.i too, like the constant grinding
Reactions:
Show hidden low quality content
You must log in or register to reply here.
Share:
Facebook Twitter Reddit Tumblr WhatsApp Share Link
Top Bottom