Jump to latest Follow Reply
Menu
Install the app
You are using an out of date browser. It may not display this or other websites correctly.
You should upgrade or use an alternative browser.
Imperator: Rome 8890 Bug Reports 3645 Suggestions 2387 User Mods 643 Tech Support 499 Multiplayer 56 After Action Report (AAR)
Previous dev diary Next dev diary
Show only dev responses
Greetings all,

My part of today’s developer diary focuses on further changes coming to the population system in 2.0.

The changes to civilization value mentioned previously opened up further opportunities for a rethink on population growth. In 1.5 and before, cities were largely sustained by prolonged inwards migration. While this is not something I necessarily want to change, we’ll be splitting up where population growth comes from, with the dual intentions of letting cities stand their own ground when growing pops, and allowing for more engagement in how you promote growth in owned territory.

Firstly, base pop growth, and pop growth from stability have been reduced significantly.

Thirdly, the population growth rate from stored food has been slightly reduced, however, the food consumption of tribesmen has been reduced, making it easier to boost growth in undeveloped tribal territories without also affecting the inherently low population capacity of said land.

Lastly, various sources of population growth have been slightly reduced to accommodate the new increases from civilization value.

What does this achieve?

Overall, there should be slightly less global growth in the average game, but still enough control to make long-term decisions valid, and for local factors to have much more of an impact on the fabric of the game. 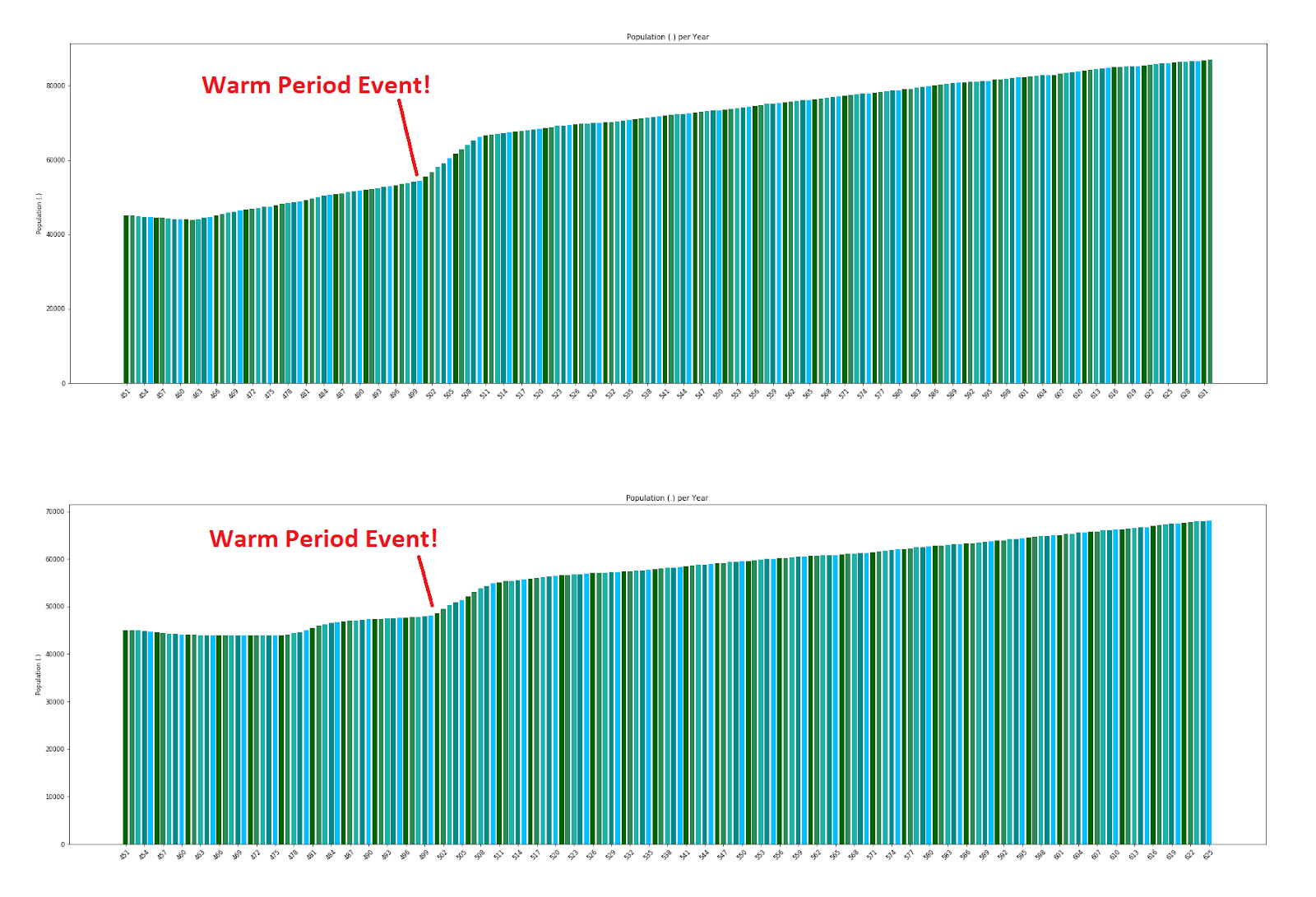 These graphs show the 2.0 build prior to population changes, and post population changes. As you can see, the newer system (bottom) results in less total population over time, with a marginally nerfed warm period event being one of the main factors.

Games in 1.5 had a tendency to balloon in population density towards the endgame, due in part to the availability of inventions and modifiers affecting pop growth. With population now being intrinsically related to army sizes, we felt it was time to return to a more realistic* growth pattern that still allows the player to manipulate the world situation to their advantage.

Related to these changes, domestic migration has been slowed down slightly, and settlement production buildings (with the exception of the Legation) now reduce outward pop migration to almost 0 (unless there are extenuating circumstances such as occupation or overpopulation).

*The academic consensus appears to be that the usual global increase in population entered a bit of a plateau at around the time Imperator is set, to around the time it ends.

Somewhat tangentially to population changes, we’re also going to be gating the maximum research efficiency of nations. The base maximum research efficiency of nations will now begin at 125%. This value can be relatively easy to achieve for smaller nations, and should still offset technological advancement positively if focused upon, however, a great disparity in tech between larger empires and city-states was simply too easy to achieve.

We still want technology to be a valid choice in nation-building, however, and numerous nodes have been added to the invention tree, increasing the maximum research efficiency that a country can achieve - if you want to build a state as a shining beacon of technological advancement, this is entirely possible, but you’ll have to weigh up this decision against other valuable advancements. 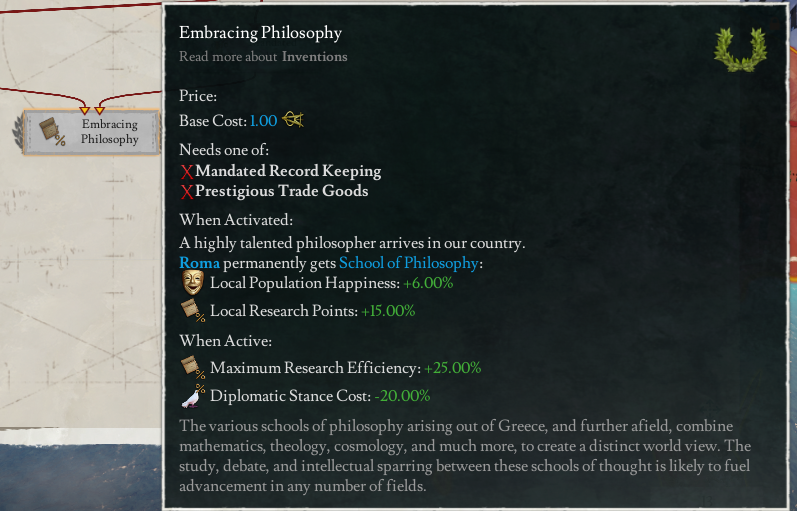 With that, I’ll hand over to @Chopmist to take you through some of the map changes coming in 2.0!

[The eagle eyed among you also noticed the recurrence of the infamous ‘glowing borders’ bug in a recent screenshot. This has since been resolved.]
Click to expand...

Marius Map Changes
The cartographically committed among you may have noticed that Anatolia and Phoenicia have received a facelift for the Marius patch.

These changes began as small tweaks to the region as we reworked the Antigonid split events, but grew as the patch progressed. In the end the whole peninsula was overhauled, Anatolia being an important region across the timespan of the game and to the Diadochi wars in particular, and one which was arguably not well represented pre-2.0.

Population centers, road routes, impassables, lakes, rivers, and more have been tweaked to better reflect the region in the early Hellenistic era. Many thanks to our betas and forumites for their research and suggestions, especially @Samitte and @Ketchup & friends, who will no doubt recognise their labors here. 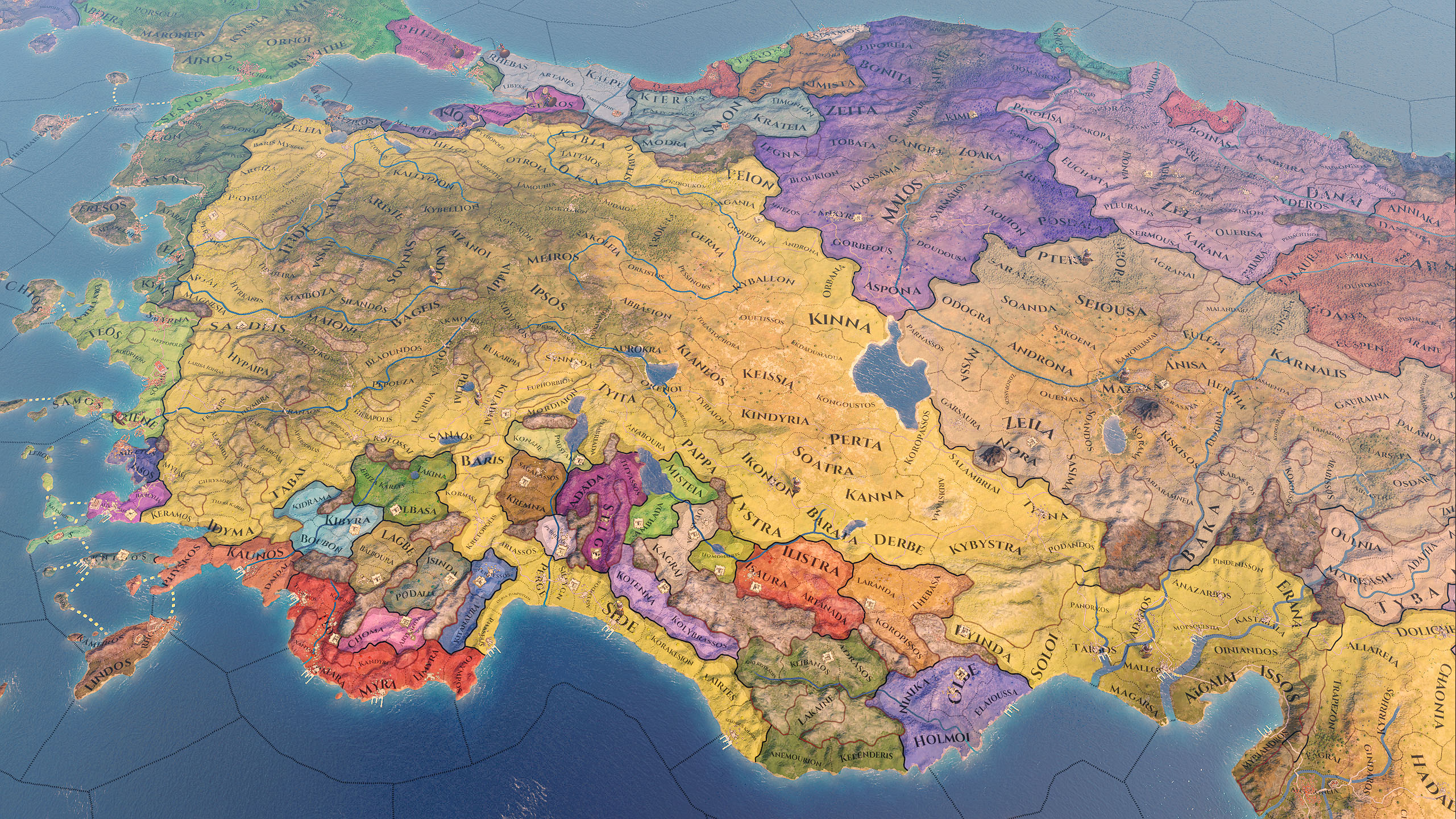 The starting situation in Anatolia.

In addition southern Anatolia is now split between small native tags who cannot directly threaten Antigonus but make movement more awkward and soften the underbelly of the kingdom, representing the lax central control around these mountains.

Lycia and Olbe will begin as subjects of the Antigonids, who will retain the Persian road from Kelainai to Perge along with the Pamphylian coast unless they abandon the east. This will make the Cilician Gates much more important until these tribes are brought under proper control, and provide more native Anatolian starts, several cultures of which have now received formable tag decisions.

As part of these changes, the Anatolian culture group has been broken up, with the addition of cultures. Moreover, Bithynian has been moved from the Hellenic to the Dacian group, which has also received the new Mariandynian culture. Elsewhere, Paeonian has been added to the Illyrian group, and Talaiotic at long last added to the Occidental group. 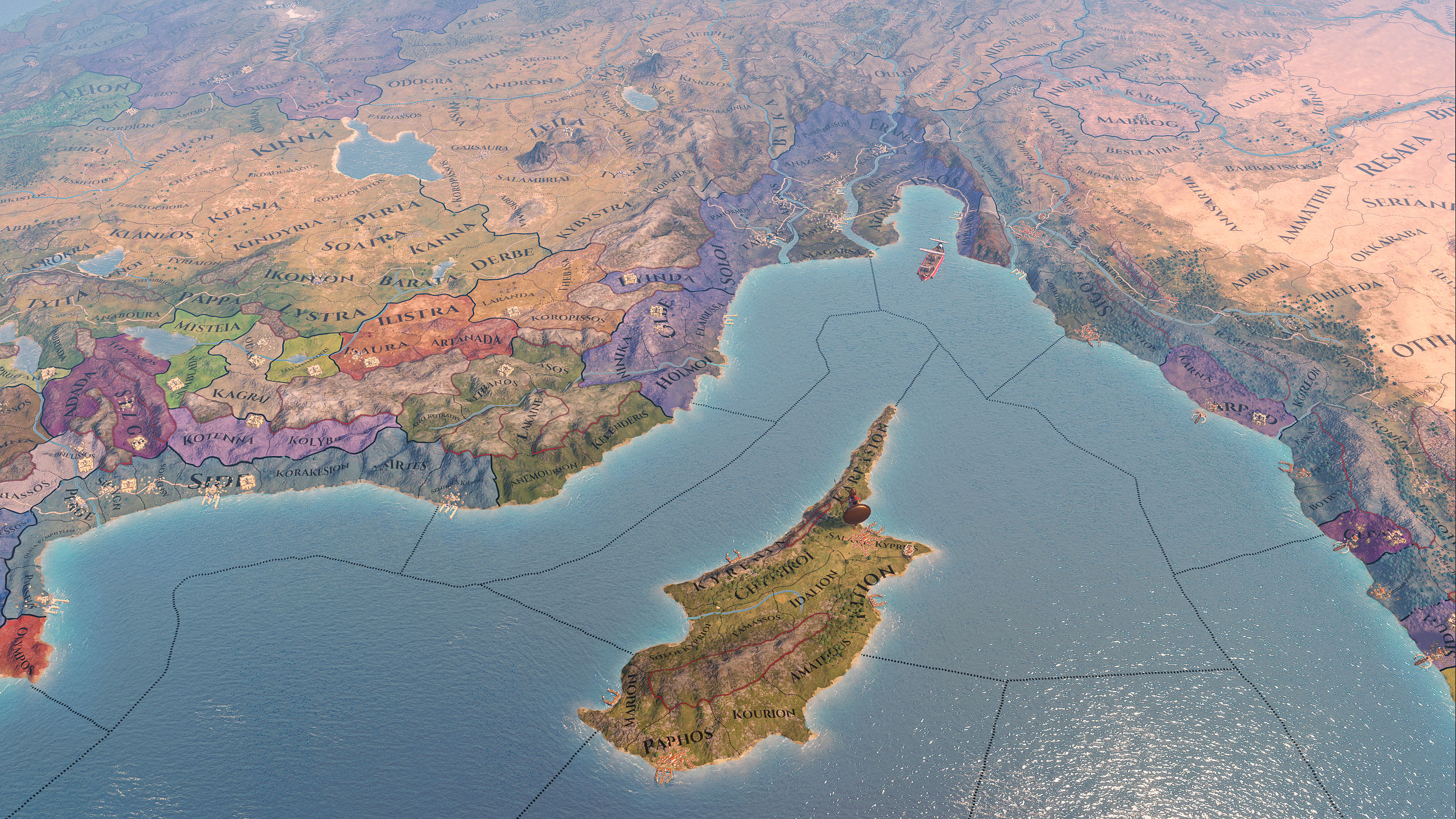 A post-division view of southern Anatolia, northern Phoenicia, and Cyprus.

These changes will hopefully make fighting in and ruling over Asia more interesting, though other parts of the world haven’t been totally ignored.

The above screenshot also highlights the changes to mountain passes, the smallest of which are no longer ownable, instead being wastelands with very low combat width which serve as choke-points where a smaller force can hold off a larger. Cilicia Pedias is surrounded by such passes, with only the coastal route to Pamphylia avoiding these bottlenecks. 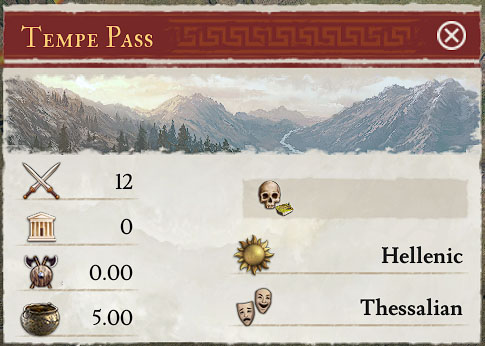 For those who like specifics, some of the notable changes are summarized below. That’s all from me! 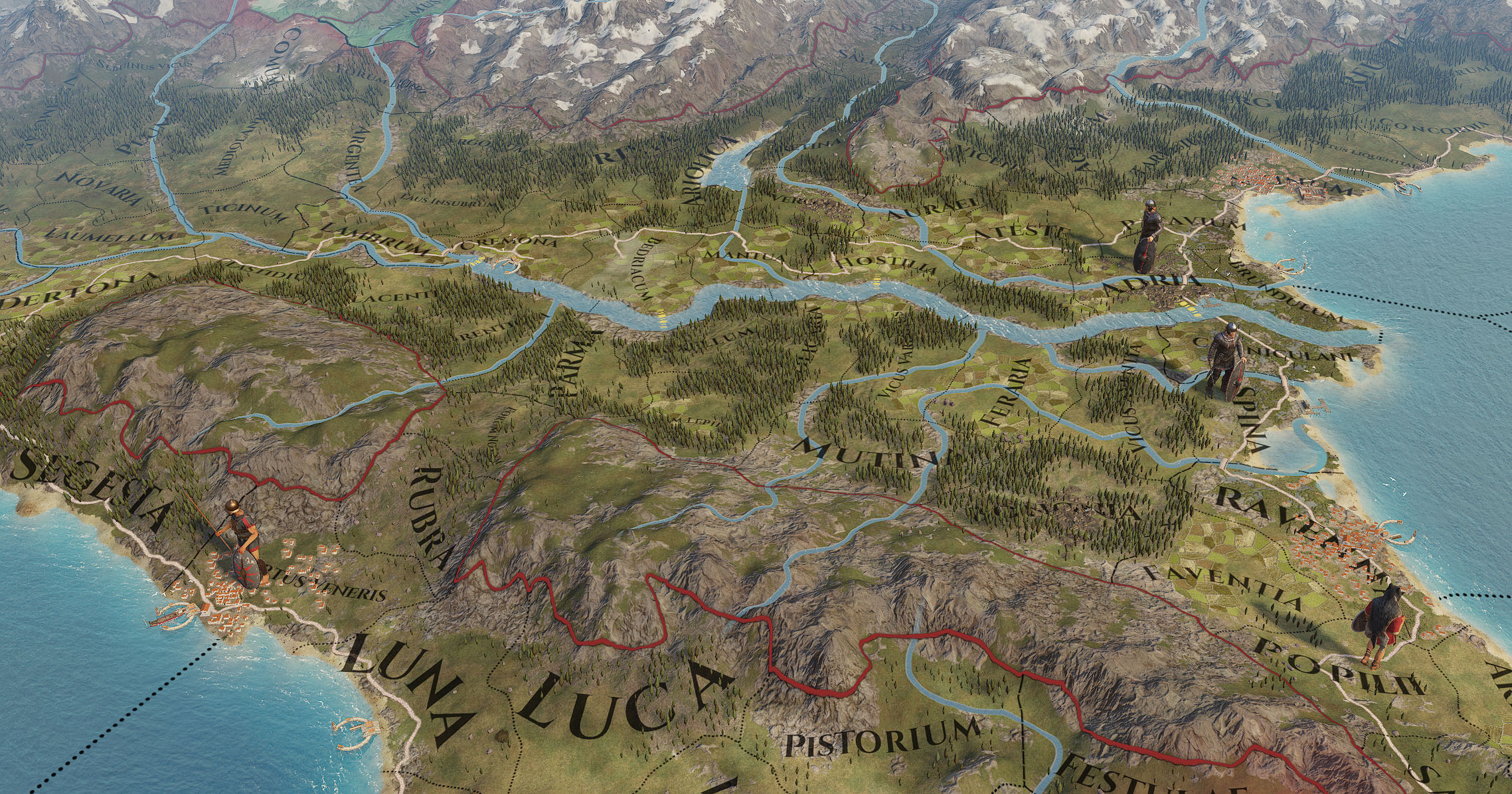 Arheo said:
hese graphs show the 2.0 build prior to population changes, and post population changes. As you can see, the newer system (bottom) results in less total population over time, with a marginally nerfed warm period event being one of the main factors.
Click to expand...

For the love of God, use the same y-axis scale in both graphics

Never mind , I love the DD’s, they have changes long requested by the community. Thank you!!
Last edited: Jan 25, 2021
Toggle signature
Do not forget to UPVOTE all suggestions using the arrow next to the opening post in the suggestion forum new feature!
Reactions:

Arheo said:
[The eagle eyed among you also noticed the recurrence of the infamous ‘glowing borders’ bug in a recent screenshot. This has since been resolved.]
Click to expand...

Pop growth and runaway research were both issues which needed to be solved and it's nice to see fairly elegant solutions to these.

The much lower research cap also has the handy side effect of making city specialisation more interesting - there's no longer such a need (and such great rewards) to be pushing out huge amounts of research which opens up a variety of different options.

> [The eagle eyed among you also noticed the recurrence of the infamous ‘glowing borders’ bug in a recent screenshot. This has since been resolved.]

Praise be!
Also love the map changes, can't wait to get my hands on this. Anatolia should be much more interesting!
Also smart way to solve the research problem. You have to consciously specialize now.
Toggle signature
Veni, vidi, AE
Reactions:

I think this could be achieved by just let population in a territory increasing pop growth itself, atm "Stratera Balance"-mod does this by +0.03% PopGrowth per 10 inhabitants.

Just Civ Value looks a bit arbitrary for me.
Reactions:

Nice! Finally the Po is a major river!
Toggle signature
Pie charts and sliders are overused and bad in modern GSGs, fite me.
Reactions:

Speaking of pop growth, shouldn't it be an S curve?
Reactions:

maxk94 said:
I think this could be achieved by just let population in a territory increasing pop growth itself, atm "Stratera Balance"-mod does this by +0.03% PopGrowth per 10 inhabitants.

Just Civ Value looks a bit arbitrary for me.
Click to expand...

It is slightly more convoluted but it does the same thing, since 10 pops = 1 building = 2% civ = 0.01% (?) growth
Toggle signature
Pie charts and sliders are overused and bad in modern GSGs, fite me.
Reactions:

IsaacCAT said:
For the love of God, use the same y-axis scale in both graphics

Never mind , I love the DD’s, they have changes long requested by the community. Thank you!!
Click to expand...

Edit... Wait... their X-axes aren't even unified... Let me make another version.
Toggle signature
A game is as good as all its low-level mechanisms working properly. Features should be considered "not delivered" if older basic issues have not been resolved.
Reactions:

Agree on graph etiquette though
Reactions:

Chopmist said:
Many thanks to our betas
Click to expand...

Am I reading too much into it, or does this mean that the game is in a closed beta?
Reactions:

No release date yet, unfortunately. But some nice fixes are always welcome.
Reactions:

Is the initial decline in population due to all the wars going on at the start? Almost makes me feel bad.
I suppose we'll have less deaths now that carpet sieging isn't a thing anymore as well right?
Toggle signature
Veni, vidi, AE
Reactions:

The Po (Padus) river not have ports. Please remove this.

Is it weird if i'm most excited about the anatolia changes? The rest are nice too don't get me wrong it's just that anatolia looks like a much more intresting place all of a sudden.
Reactions:

bass12 said:
Am I reading too much into it, or does this mean that the game is in a closed beta?
Click to expand...

We have had betas on the project since long before it went live, helping us test things and provide research.
As far as I know, all PDS projects do.
Toggle signature
Twitter: https://twitter.com/SnowCrystal_GD
Reactions:
P

O people of Imperator, the promise land of Cremona should be build with honor, dignity and blood. Our ship will sail. Our trade will flourish. It will be the megapolis of the world. But wait, barbarian horde is................
Reactions:
Show hidden low quality content
You must log in or register to reply here.
Share:
Facebook Twitter Reddit Tumblr WhatsApp Share Link
Top Bottom