Jump to latest Follow Reply
Menu
Install the app
You are using an out of date browser. It may not display this or other websites correctly.
You should upgrade or use an alternative browser.
Imperator: Rome 8871 Bug Reports 3643 Suggestions 2380 User Mods 635 Tech Support 496 Multiplayer 56 After Action Report (AAR)
Previous dev diary Next dev diary
Show only dev responses
Hi, and welcome to another dev diary for Imperator: Rome!


As one of the major features in the 1.3 Livy update, we wanted to address objective and direction.


We had discussed the possibility of a mission system well before release, but had not been happy with any of the designs that we considered. There were several key points that we felt (for legitimate reasons), hadn’t really been covered by similar systems in our sister-titles, and we felt strongly that I:R should have it’s own, unique system.


Firstly, we wanted to ensure that any iteration of a mission system avoided rail-roading the player into playing the game in the same way each time (with any given nation), and secondly, that the player did not only complete tasks, but that the tasks and missions would drive story, both for the intended target, and within the local region.


What we came up with, was a system in which we would write mission ‘blocks’, if you will, which covered compact geographic areas or distinct subject matter, and of which the player had an array to choose from. For example, Rome may be presented with the initial choice to focus on uniting Italia, or instead choosing a mission to develop the land they already own, or turn to the south and deal with Magna Graecia. 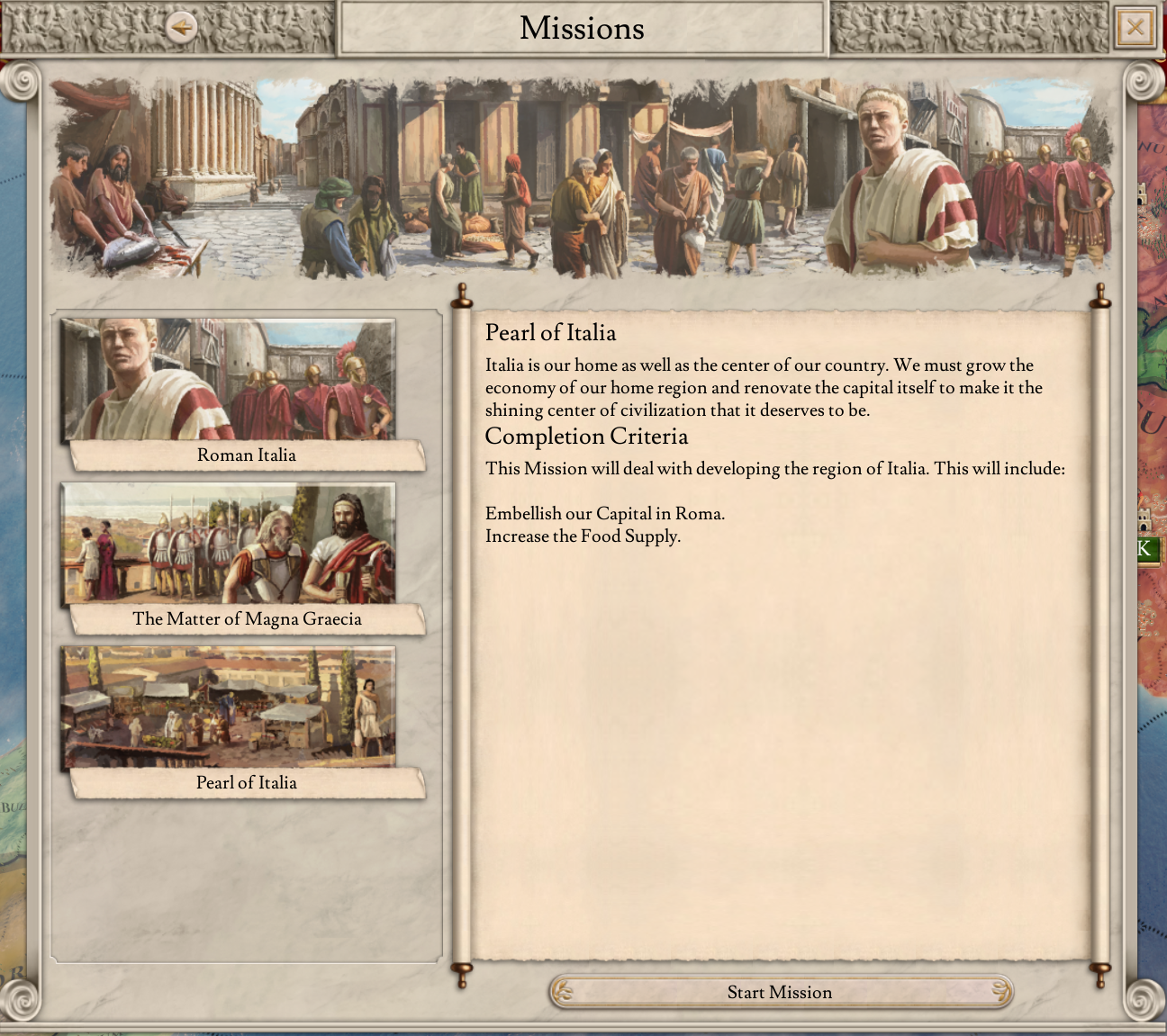 Each of these mission blocks will be self-contained, and are intended to tell a bit of a story alongside the expected mission fare. Missions will appear as dynamically generated flow-trees, and contain a variety of tasks including timed tasks akin to focus trees, and objectives requiring conditions to be fulfilled.


With the relative power of the scripting tools available to us, we’ve been able to create a series of highly procedural missions with varying objectives and task branches, which will react to the situation in which a nation finds itself, and which should maintain a basic feeling of individuality each time they are selected. This idea of ‘generic’ missions, if you will, is an inevitability while the mission system is in its infancy, but should provide enough variety as to prevent every nation from feeling directly comparable. 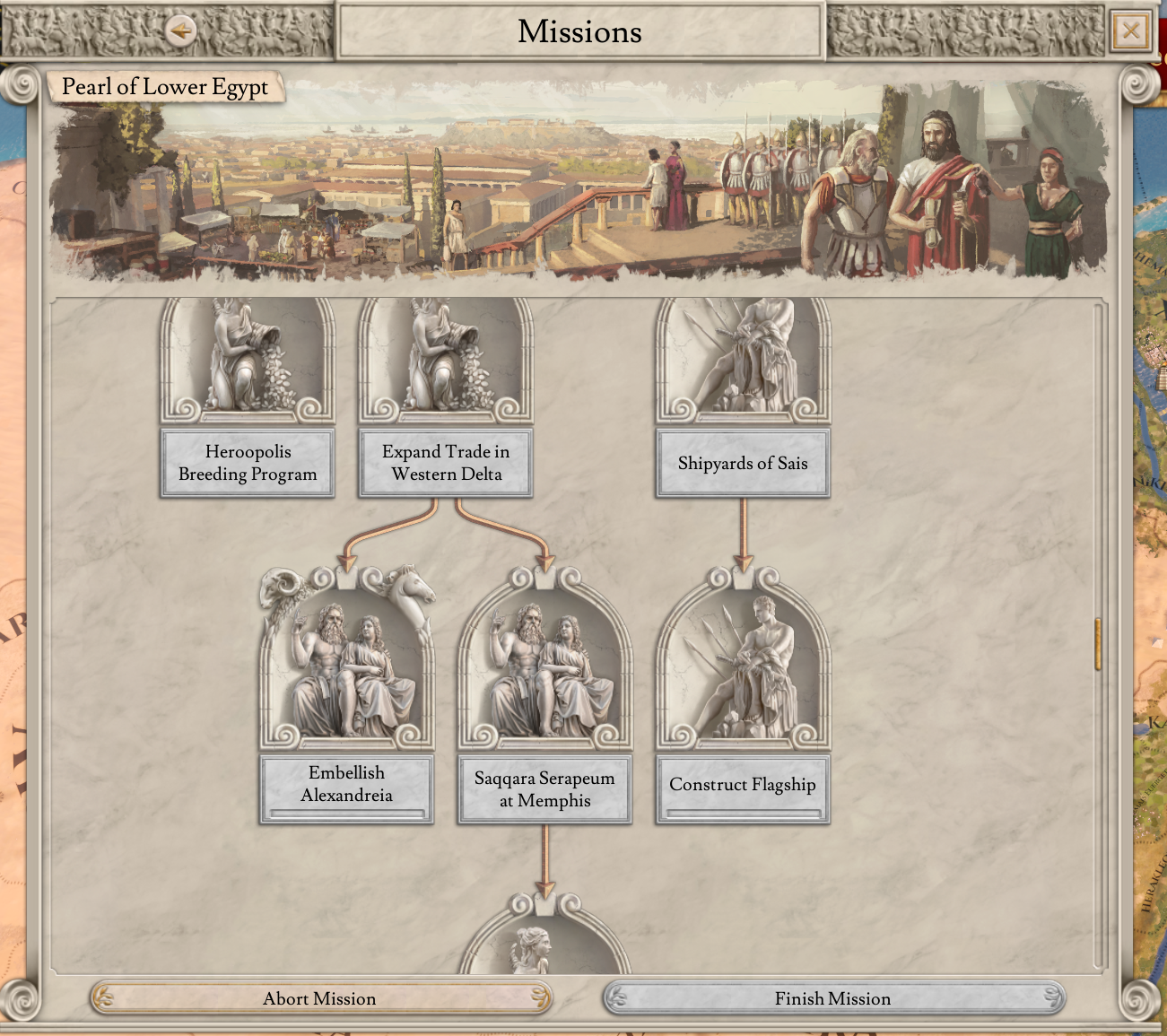 Of course, we are working on a great set of story missions, and one of the primary focuses of these is to provide a sense of regional narrative. A mission for Rome which deals with Sicily, for example, will contain a great deal of regional involvement; for the primary antagonists as well as for nations close by, but incidental to the greater conflict. Our story missions are just that; stories intended to allow a player to pick chapters appropriate to their interests, in which to immerse themselves.

We’ll cover a bit more about our story missions in the near future, so stay tuned, and I’ll do my best to cover any questions that you have about the upcoming systems!

that's sound quite awesome... Will, along side this, come more diverse cultural heritages and idea sets?

A mission system is certainly a must. It is nice to see the next update will definitely vastly improve imperator again.

If this is another free update, I hope you guys let us trial run it like the last one. Although, I know a lot of people complained the game was in beta, so I am sure it probably makes you guys hesitant. I also know you guys don’t let us try out eu4 free patches. I think it was a cool thing to try out the free patch for 1.2. With its release and once I understood it which I get better at every day, I certainly enjoy this game more than eu4. But I always loved Rome total war and Rome total war 2 quite a bit less but still ,so it may be an inherent bias.

Very interesting! I love the idea of building a stories and glad they are flexible and do not force you down certain paths.
Toggle signature
Imperator MP on Tuesdays, Thursdays and Sundays: https://discord.gg/hVg3cNEYyN

Will we see diadochi wars by the AI in 1.3? I could see mission trees the solution to steer the AI and players to do massive diadochi wars.
W

Any news on 1.2.1? I'm mostly interested of bug fixes to combat deployment.

I couldn't be happier, thanks!
Toggle signature
"I have existed from the morning of the world and I shall exist until the last star falls from the night.
Although I have taken the form of Gaius Caligula, I am all men as I am no man, and therefore I am a god."​

Urghs, the new missions are among my least favourite innovations of EU IV, right because they are railroading the player. Big disagree here.

The rumours were true, and I'm glad that they were. I really like this idea of tying gameplay and narrative together.

Also, the UI is beautiful!
Toggle signature
...but that's just my opinion.

Interested to see how if you get a mission to "deal with X" what happens if X gets killed by Y? Can missions be failed/interrupted?

Like if you have to deal with Syracuse as Rome, what happens if Carthage defeat them. Does the tree-reorganise?

Focus trees in HOI, then EU now in IR...repeating, but good.
I like the ideas in the other games - probably will like in IR
H

Procedural missions? Amazing! I can wait to play Epirus missions! This update will give to the game much more inmersion, but you must considering all the nations, from the tribes to Rome!

Will choosing one of the blocks prevent us from choosing another?

Will choosing a block open up a mission tree that has to be fullfilled before you can choose another?

Will the right path of the mission tree exclude the left?

Will the missions include permanent claims that lasts even if you are finished with one mission and starts on the next?

This will add a lot to my enjoyment of the game, thanks!

Could you expand more on the storytelling aspect? I’m confused as to how it will be done. Does this mean that every time u complete a Mission, an event will go on, that will affect other nations as well? Will other nations get events as well? Say if u interfere in Sicily, Macedonia or Carthage will also get an event alerting you to what is going one, and they can choose to intervene or not?

Looks awesome.
I wonder, would migratory tribes get missions to relocate somewhere, even, like half a world across? They feel very sedentary, it's always a great surprise to actually see someone migrating.
Toggle signature
My mods: Fullscreen Barbershop for CK3, Better UI for Imperator, Elegant Galaxy for Stellaris

I like it, especially since by the name of the missions it looks like you put a huge focus on internal politics and playing tall, and not just map painting.


thoscme said:
Will choosing one of the blocks prevent us from choosing another?
Click to expand...

I hope not, it would be strange if improving the Latium prevented you from claiming Italy and Magna Graecia but opened you a path to Sicily and Cisalpine Gaul. Or just blocked all Roman expansion.

Will the AI also be getting missions/events to give it a direction?, as right ow the AI nations just blob randomly IMO

I can't wait to see the beta test. I also hope that the Levy Update will bring some changes to the trade system to make it more interesting
Toggle signature
"I am the senate" - Caesar.
"Not yet" -Junius Brutus.
"I love the republic" -Augustus.
"UNLIMTED POWER!!!" - also Augustus.
GENERATION 40: The first time you see this, copy it into your sig on any forum and add 1 to the generation. Social experimen
Show hidden low quality content
You must log in or register to reply here.
Share:
Facebook Twitter Reddit Tumblr WhatsApp Share Link
Top Bottom