Jump to latest Follow Reply
Menu
Install the app
You are using an out of date browser. It may not display this or other websites correctly.
You should upgrade or use an alternative browser.
Hearts of Iron IV 39463 Bug Reports 11294 After Action Reports (AAR)
Previous dev diary Next dev diary
Show only dev responses 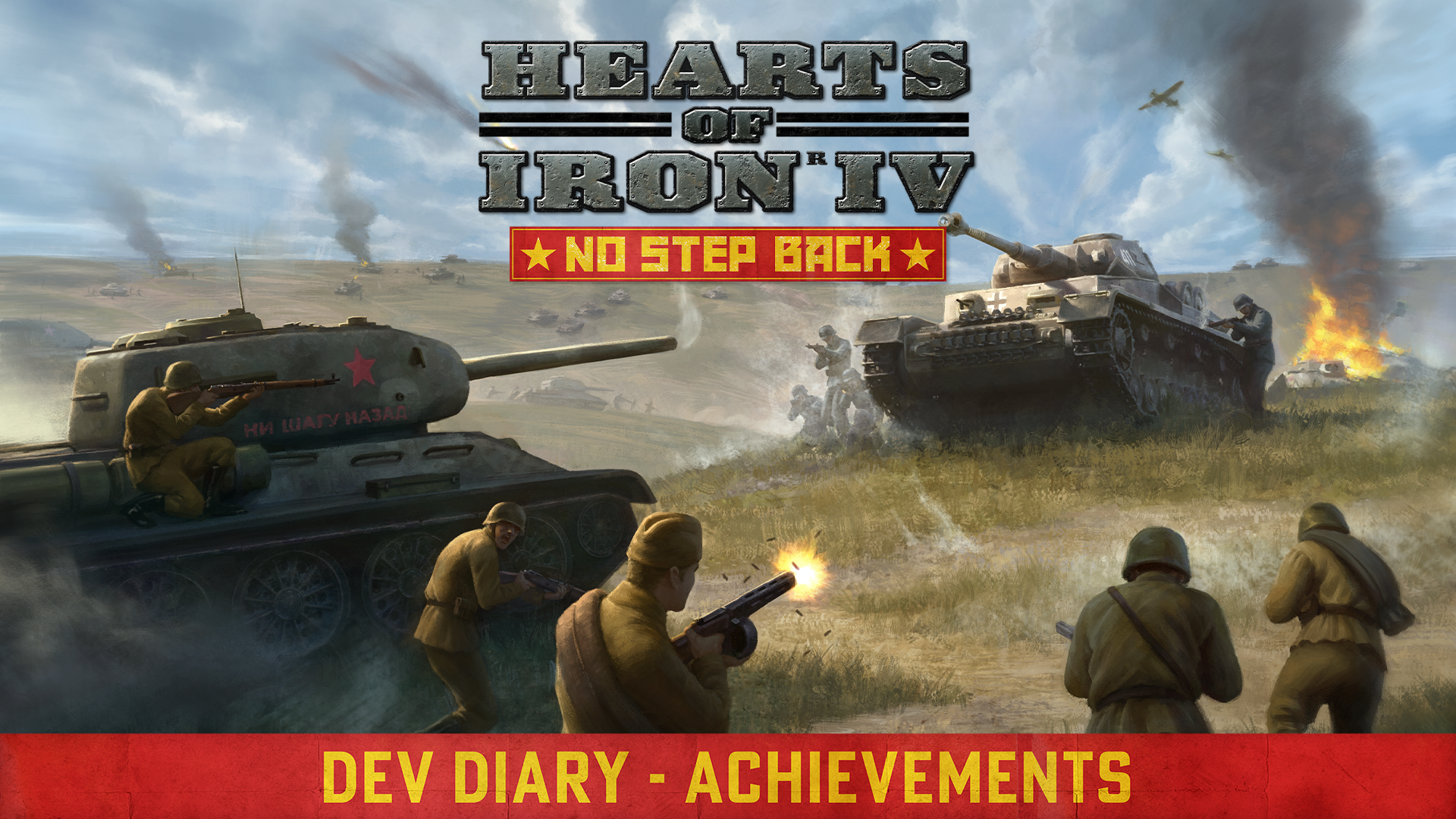 HoI4 DevDiary: No Step Back Achievements

Hello, and welcome back to another Dev Diary for Hearts of Iron 4. As we close in on wrapping up this major operation, code-named Barbarossa, before winter falls (the first snow fell in Stockholm this weekend, I am sure it’ll be fine), today we will talk about the new achievements that will be added with the release of No Step Back.

As far as the process is concerned, we usually have an open list of achievement suggestions during the whole DLC development cycle. Near the end of the cycle, we take a vote on what achievements we want to see in the game (after eliminating any that would be technically impossible) and start the process of implementing them and ordering art.

For No Step Back, we started with a list of 49 suggestions, and whittled it down to 20 Achievements:

At least they run on time!: As fascist Italy, have max level railways in all your core states

Not much fun in Stalingrad: As Germany, capitulate the Soviet Union without taking Stalingrad

No more Partitions: As Poland, be independent and ensure that both Germany and the USSR are either in your faction or don’t exist

The Pope? How many Divisions does he have?: As the USSR, take Rome.

This is going to be LIT: As Lithuania, hold the capitals of all of your neighbours

It has my name on it: As any Baltic State, conquer the entire shoreline of the Baltic Sea

This Achievement is Cheesy: As Latvia, form Ostland and occupy Vasterbotten. (n.b.: Vasterbotten is located in Lappland State)

Esti is Scandi: As Estonia, secure Scandinavia (n.b.: Every state in Scandinavia needs to be controlled by Estonia or a Subject of Estonia)

Not a step back!: As the Soviet Union never lose 1 core territory to anyone before 1945

One Step Forward: As the Soviet Union, declare war on Poland and Germany before Germany attacks Poland.

The Soviet Onion: As the Soviet Union, have only puppets as neighbors

The Romanovs laugh last: Restore the Romanovs to the throne and conquer Germany, Hungary, Austria, Czechoslovakia,Turkey, and Bulgaria.

We don’t really like statistics: As the Soviet Union under Stalin, conquer Germany while suffering less than 1 million casualties total

Race for Germany: As the Soviet Union, capitulate Germany after the Fall of France but before the Allies control one German core state

Around Eurasia in 80 days: Have a railroad from Gibraltar to Singapore

Poland Peasant Revolution: As Poland, have the Peasant’s Strike overthrow the government.

That's all from us today! Next week, you will get the Patchnotes for 1.11 Barbarossa (unless we are thrown out of position by a sudden enemy counter-attack).
Reactions:

eastcoastceojam said:
I finally was able to knock out the "Miklos Horthy and the Habsburg Prince" achievement today, and I noticed that some of the NSB achievements are already showing non-zero completion rates.

When the new achievements first appeared on Steam last week, they all showed 0% completion. Now some of them are showing as being completed by 0.1% of the player community.

Is this just people using Steam Achievement Manager to reward themselves, or has an early release version of No Step Back already hit the market?

Possibly cheating, although I'd doubt that since it's so blatant and an obvious way to mark out cheating.

More likely, at least from my perspective, devs testing functionality acquiring the achievements or possibly reviewer early access? Not to sure if they do the latter for DLC and if they did, if they'd do it this early.

Possibly also a hiccup in Steam's achievement servers. Looking at when people got achievements is practically worthless because of things like that. I've got a game where I got one achievement and all the others available at the time triggered as well. That must have been 2, 3 years ago? From an outside view, that looks like I was cheating in that game.

Only worse group are console achievements. I had an achievement trigger quite literally a week after the last time I'd touched the game.

It wasn't sitting open or anything like that. I did earn the achievement the last time I played. But for some reason it was a week later that it went, hey, you did it!

Scared the shit out of me as well, just walking by my TV and suddenly an achievement notification ping.

I am 100% sure it's just Achievement Manager because Paradox tends to not test their achievements at all
Reactions:
L

A suggestion for the future (would fit No step back theme but it's a little bit too late to add more achievements):
Ziemie Odzyskane (or however I should call them in English - https://en.wikipedia.org/wiki/Recovered_Territories )
As Poland own Silesia, Western Pomerania and Masuria. Yes, peace conference is required
Reactions:
I

The 80 day train run is also the one I'm looking forward to. Annoyingly I just finished my Fascist UK EU+Federation WC run last night where it would have been easy. Still, good opportunity to play with the new train mechanic.
Reactions:
J

Jap, me too I started "One empire" just before PDX announced new achievements and finished it yesterday. i don't like play almost this same game for achievements, so I think, that "The 80 day train" will be cool as combination with some USSR achievements (we have most of required lands at the starts) or with "Not much fun in Stalingrad".
T

TempestM said:
I am 100% sure it's just Achievement Manager because Paradox tends to not test their achievements at all
Click to expand...

You sure about that?

Archangel85 said:
1) Yes, it is part of acceptance testing.

Goodfontana said:
1) Have you guys tested and obtained these achievements yourselves? I just want to make sure we are not going to have a similar sh*tshow to "Putting the band back together" (which, to this day, is still broken) with the "Habsburgs everywhere"
Click to expand...

TropikThunder said:
You sure about that?
Click to expand...