Jump to latest Follow Reply
Menu
Install the app
You are using an out of date browser. It may not display this or other websites correctly.
You should upgrade or use an alternative browser.
Hearts of Iron IV 37731 After Action Reports (AAR)
Previous dev diary Next dev diary
Show only dev responses

Hello everyone, last week we covered the last of the new focus trees, so from now on we will focus (heh) on new features and changes again. Today we are going to start off by talking about changes to how wars work as well as sharing some very interesting telemetry data!

War Changes
When we planned out Waking the Tiger, we knew that we wanted to solve several issues with wars once and for all. The game wasn’t really set up for 3-way-wars and it tried to stop you from 3-way wars as much as possible, and if it failed some pretty nasty bugs could happen. Wars could in certain cases end up either having to force friends into war, or drop people from wars which usually really messed up both multiplayer and singleplayer when it happened. It was all just a nasty and horrible mess on the code side as well.

Our changes effectively mean that now every two nations at war have their own little war and we instead present wars as a summary of sides that make sense. How you look at a war as a player shouldn't really look any different now. This was a massive change that has taken us a lot of time (and quite a bit of sanity), but I am confident that it will have been worth it with all the issues it has solved and freedom for players it will enable (particularly for mods that like to do a lot of wars from events and focuses where there was a big chance of things working out wrong - not naming any names).

When playing, the biggest changes you will notice is that wars merging now is a lot smoother. War score, casualties and such are properly tracked and retained. Its now also possible to fight 3-way wars (or more) so we can handle Axis vs Comintern vs Allies vs The Japanese co-prosperity sphere etc.

The war interface has also gotten a bunch of changes: 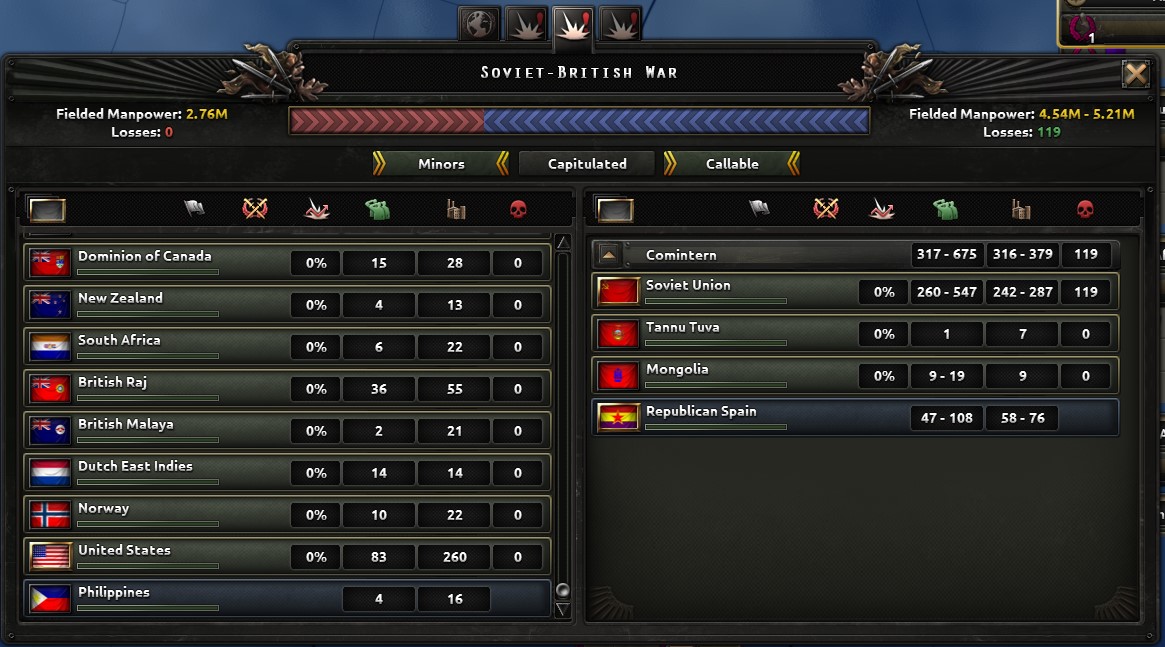 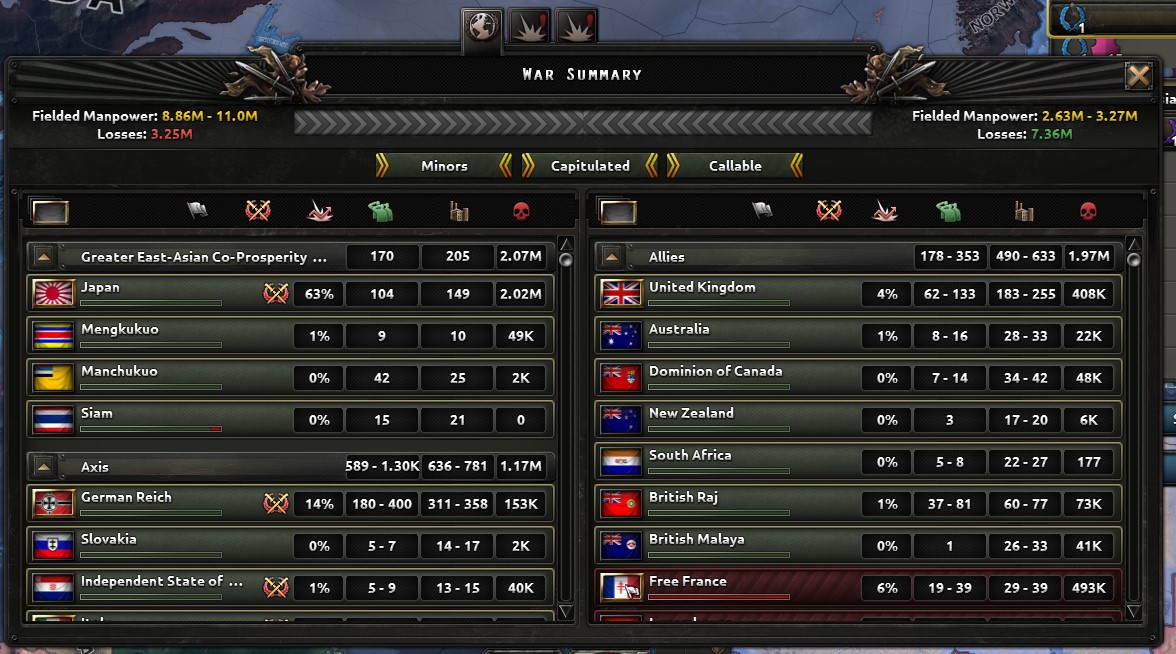 One of my favourite new things is that we show a breakdown of the casualties, so you can see how many casualties you caused for a specific nation: 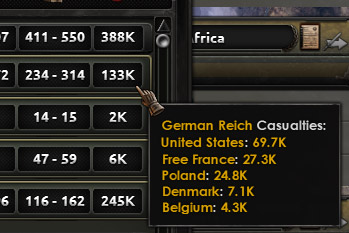 Difficulty Settings
We are slowly building up better and better telemetry on HOI players and I really love to share it with the community when it’s surprising, and this one surprised me a lot actually! It turns out that close to 40% of players prefer to play on the lowest difficulty setting. I would have expected this to be quite a bit less! 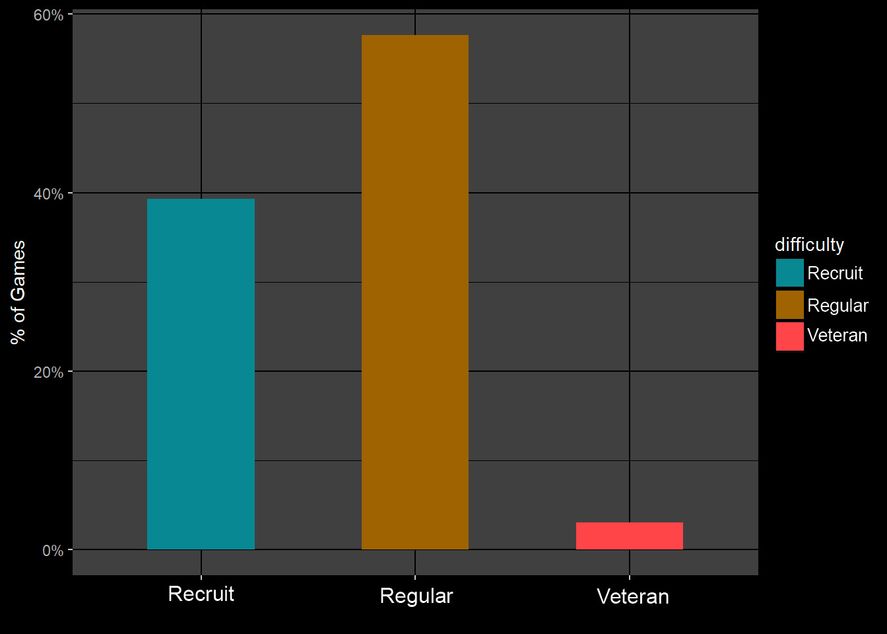 As number of hours you play goes up people migrate away from recruit a bit. So for players with less than 50 hours played, 60% of them use Recruit and after playing 200+ hours only about 28% still use Recruit. Veteran shows the largest relative change. For beginners, it is 1.4% who use it and it goes up to 3.5% for 200+ hour players. The vast majority use Regular. It's the difficulty setting that doesn't give you any bonuses or penalties so this is usually what people prefer. My design philosophy is to try and stay away from direct combat bonuses and such that will make you learn the game in the wrong way. I prefer buffing things that allows a player to play more sub-optimal, so faster research (or slower so you must make more optimal choices), smaller losses on efficiency when changing production lines or less impact of lack of resource and such. It's also important to only affect the player as you don't really know which of the nations will end up on their side or as enemies. For example, in HOI3 depending on country it could actually be easier at harder settings, since certain nations were advantaged by that in an allied role.

So what are we doing about this? First of all we are adding two more settings (the gods of symmetry demand it!). A new difficulty before Recruit called Civilian and a new harder difficulty called Elite.

I also thought I would mention that we haven't really analyzed the custom difficulty settings yet but plan to in the future. I always recommend them to tailor your game. Say if you want a particularly strong Soviet to fight as Germany.

See you all again next week! Also don't forget to tune in to World War Wednesday at 16:00 CET where we start a new campaign to show off all the new stuff in Waking the Tiger as a Chinese warlord on the rise!

podcat said:
Our changes effectively mean that now every two nations at war have their own little war and we instead present wars as a summary of sides that make sense. How you look at a war as a player shouldn't really look any different now. This was a massive change that has taken us a lot of time (and quite a bit of sanity), but I am confident that it will have been worth it with all the issues it has solved and freedom for players it will enable (particularly for mods that like to do a lot of wars from events and focuses where there was a big chance of things working out wrong - not naming any names).
Click to expand...

Honestly couldn't have asked for a better Christmas present!
Toggle signature
Honoured to be Kaiserreich Project Lead
Proud winner of the 2017 PDXCON Mod of the Year​

good work.
did you think ever about general loyalty?
Toggle signature
It's not a game any more

podcat said:
I guess we don’t need to spend all the work we do on improving the AI after all
Click to expand...

Prepare for the shitstorm!
Toggle signature
Oh, so that's how you change your signature....

I can announce that we will announce the date within a week or two, to not be overly specific
Toggle signature
Reject reason to make the impossible possible!

Nice job!
Toggle signature
Atrocity is recognized as such by victim and predator alike, by all who learn about it at whatever remove. Atrocity has no excuses, no mitigating argument. Atrocity never balances or rectifies the past. Atrocity merely arms the future for more atrocity. It is self-perpetuating upon itself — a barbarous form of incest. Whoever commits atrocity also commits those future atrocities thus bred.

Besides Germany, how many other countries have a custom-tailored division name list now? I discovered some first-hand material on the historical IJA division name list (here) and I'd be glad to to translate it into English, but I don't want to waste time reinventing the wheel if you have already done theirs.
Toggle signature
CK2 Cultures Reborn, a CK3 mod (OUTDATED)
Do you miss Arberian, Carantanian, Coptic, Crimean Gothic, and Dalmatian from CK2?
You can now find them here, complete with all the characters, name list, and cultural names.
You can also integrate this mod into your mod projects. Instructions can be found in the post.

How does this affect the “offer peace” function if at all?

Any chance we could see the new modifiers for difficulty levels?

why have you decided to give penalty's on regular now though?
Toggle signature
"...if life give you lemons you are forced to make mass lemonades." - Pyramid_Head, in reference to MA doctrine and house rules

Will you ever change war contribution to factor in casualties inflicted not just received? Very annoying to get less favour at the conference because I didn't shovel men into the meat grinder but did cause the highest losses by miles
Toggle signature
Victorious warriors win first and then go to war, while defeated warriors go to war first and then seek to win.
Sun Tzu

Can you please fix the Multiplayer bug which allows ghost chatters to spam the lobby;

And please fix airzones so that they show the actual number and type of allied planes instead of being blank! (I think this was broken in 1.4, it used to do it this way).

And please give us a release date! What else is left? :-D

One of the reasons that I don't play on Veteran (despite the AI being easy to beat) is that the production side of things is punishing enough already. Having a varied army with lots of different types of units (SPAAG, SPART, RART, TD etc) is fun and weakening production reduces your ability to produce those things. It feels unrealistic having an army without even basic anti-tank or mechanised units up until the mid game. The AI's main problems come from its tactical and strategic capabilities and you can't always compensate for that by just cutting the player's production.
Toggle signature
Nationality: British
Religion: Sikh
Ideology: Inqilab zindabad!
Issues: Total robocide, trouser abolitionism (NEW!)
Current Occupation: Moroccan occupation of Western Sahara

Cool! Any changes to the strenghtern nation stuff? It'd be cool if you could boost minor nations as well.
Toggle signature
Ships sail on water,m'lord.