Jump to latest Follow Reply
Menu
Install the app
You are using an out of date browser. It may not display this or other websites correctly.
You should upgrade or use an alternative browser.
Hearts of Iron IV 40733 Bug Reports 11878 After Action Reports (AAR)
Previous dev diary Next dev diary
Show only dev responses

Hello, and welcome back to another Dev Diary for Man the Guns. Today, we will talk about some changes we have made to the tech and research system. 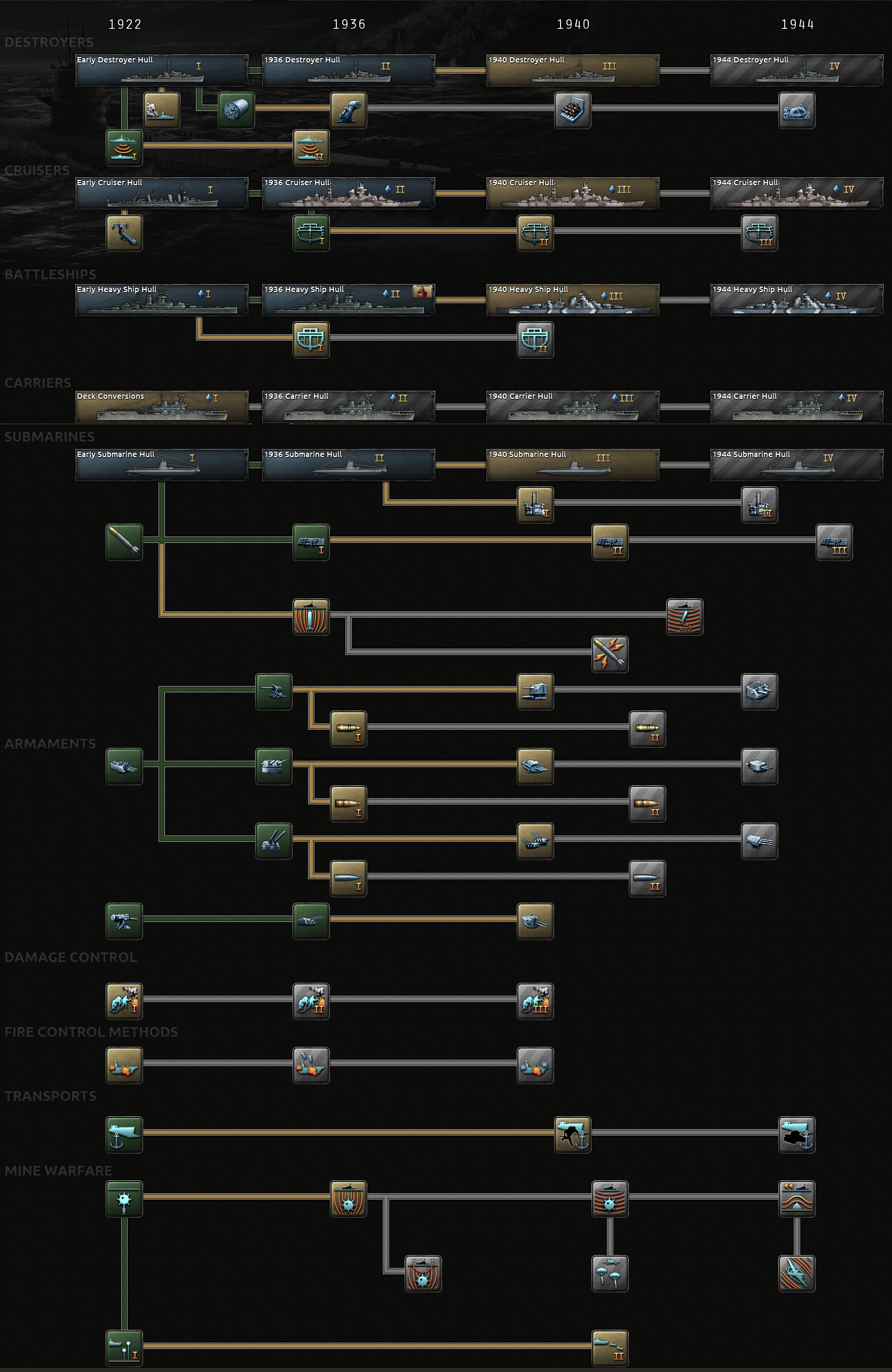 Many of these techs do unlock new modules, but some do not - ammunition techs, fire control methods and damage control training amongst other don’t, and instead provide passive bonuses. This makes them quite valuable as you don’t have to build or refit a ship to make use of them. 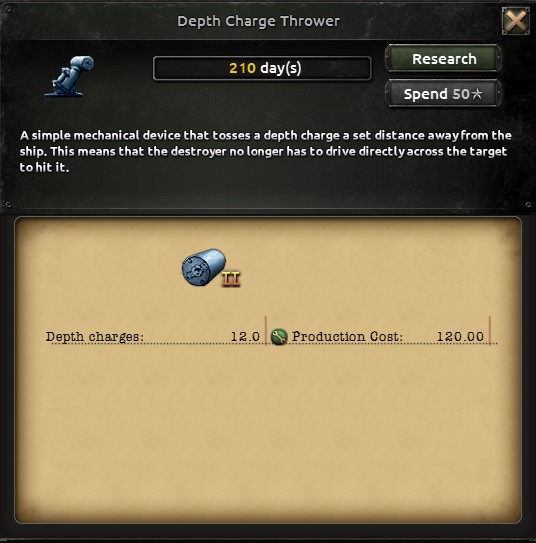 Since this adds quite a bit of research to an already pretty full research tree, we have taken some steps to offset this increase.

The first is that we have made a 15% increase to research speed across the board. The second is that a lot of the research in the new naval tech tree (as well as all the doctrine research) benefits from the research with XP system that gives you a fairly significant research boost if you have enough XP of that type to spare. For things like fire control methods and damage control training, researching without XP is significantly more time consuming to represent the lower effort spent during peacetime rather than learning from, well, experience. 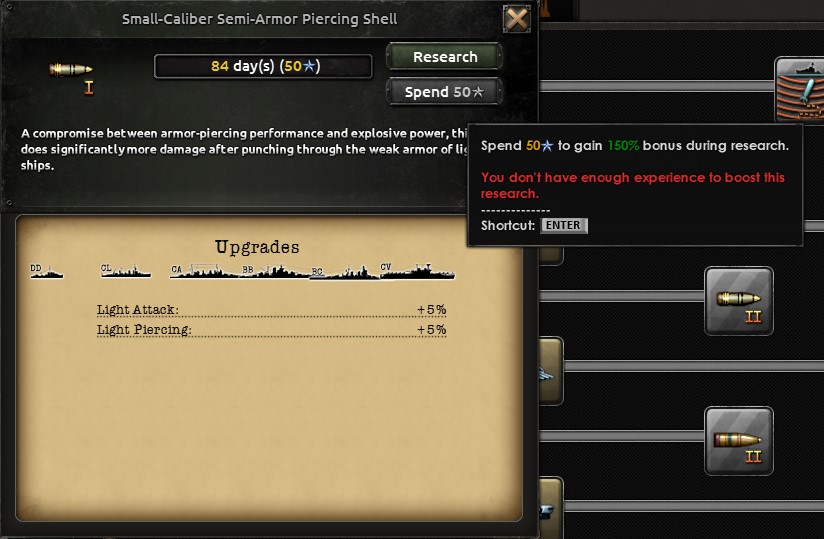 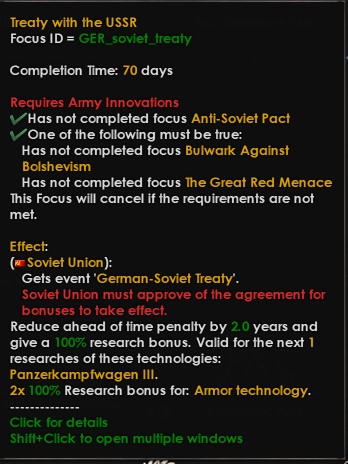 That is all for today. Next week, we will take a look at some of the art and music coming in Man the Guns.

Archangel85 said:
That is all for today. Next week, we will take a look at some of the art and music coming in Man the Guns.
Click to expand...

Great !! Thanks for the effort.

Ooo, some interesting things there, with the "ahead of time" things.

Last sentence is the best part of DD. I'm a bit tired of waiting for MtG/ironclad. I want to play with navy!

Scrolling around will be pain
T

Yeah, a lot of buttons could be made smaller to fill more on one screen. Because when initial ones are researched you constantly scroll.
T

What's the symbol in the corner of the 36 heavy hull? Maybe a special variant? Coastal Defense or Super Heavy ships?

@podcat All these changes to the tech tree are amazing. I have some questions though.

1) How much fuel you will be able to produce with Synthetic Refineries compared with natural oil production?

2) How much can I improve a ship efficiency by researching better ammunition instead of investigating new models and modules?

Cool
Toggle signature
Baal: You can't be serious.
O'Neill: Yes I can... I just chose not to.

ruzen said:
Scrolling around will be pain
Click to expand...

Can we have the following options:
1. Clearly show to which year a tech belongs. Step 1 would be the introduction of a kind of table in the background art of the techtree with each year a column. Step 2 would be that the actual year is displayed somewhere regardless of scrolling position (think of Excel and locking the top line)

2. Condense the tree (same for focus trees). There is just sooooo much wasted space. I'd rather have smaller icons than so much empty space.

3. The posssibility to expand/collapse parts of the tree. In the example given above let's assume I don't want to research sub marines (for whatever reason). So I can just collapse the submarine part. If I want to research them at a later time I can expand that section again.

I really like all the additions to tech trees and focus trees. But the scrolling is a chore...

Thavron said:
What's the symbol in the corner of the 36 heavy hull? Maybe a special variant? Coastal Defense or Super Heavy ships?
Click to expand...

does anyone have a clue what this red icon is for?

EDIT: well i got sniped by a dev

I really like the possibility of spending xp to boost research.

Is this also the case for land and air technologies?
Toggle signature
https://forum.paradoxplaza.com/forum/index.php?threads/division-commanders.1368762/

There was a mention some time ago that research time would be globally reduced, is this still the case?

Can we expect changes in peace treaties with this big of a naval rework? Like limiting a countries naval or overall production in a peace treaty, or forcing them to destroy parts of their fleet. Also creating demilitarised zones and war reperations as in factories or resources would be a nice addon.

To addition, there is still the bug of the ''National focus currently has no effect'' in the previous DLC's focus trees. I hope this DLC will not include that, and the previous bugs will be fixed.

Kazakk said:
There was a mention some time ago that research time would be globally reduced, is this still the case?
Click to expand...

It's been mentionned in the DD: -15% for everything, plus an option to use experience for an extra boost on many techs.
Toggle signature
A conqueror is always a lover of peace, he would prefer to take over the country unopposed.
-Clausewitz