Jump to latest Follow Reply
Menu
Install the app
You are using an out of date browser. It may not display this or other websites correctly.
You should upgrade or use an alternative browser.
Hearts of Iron IV 38633 Bug Reports 10665 After Action Reports (AAR)
Previous dev diary Next dev diary
Show only dev responses 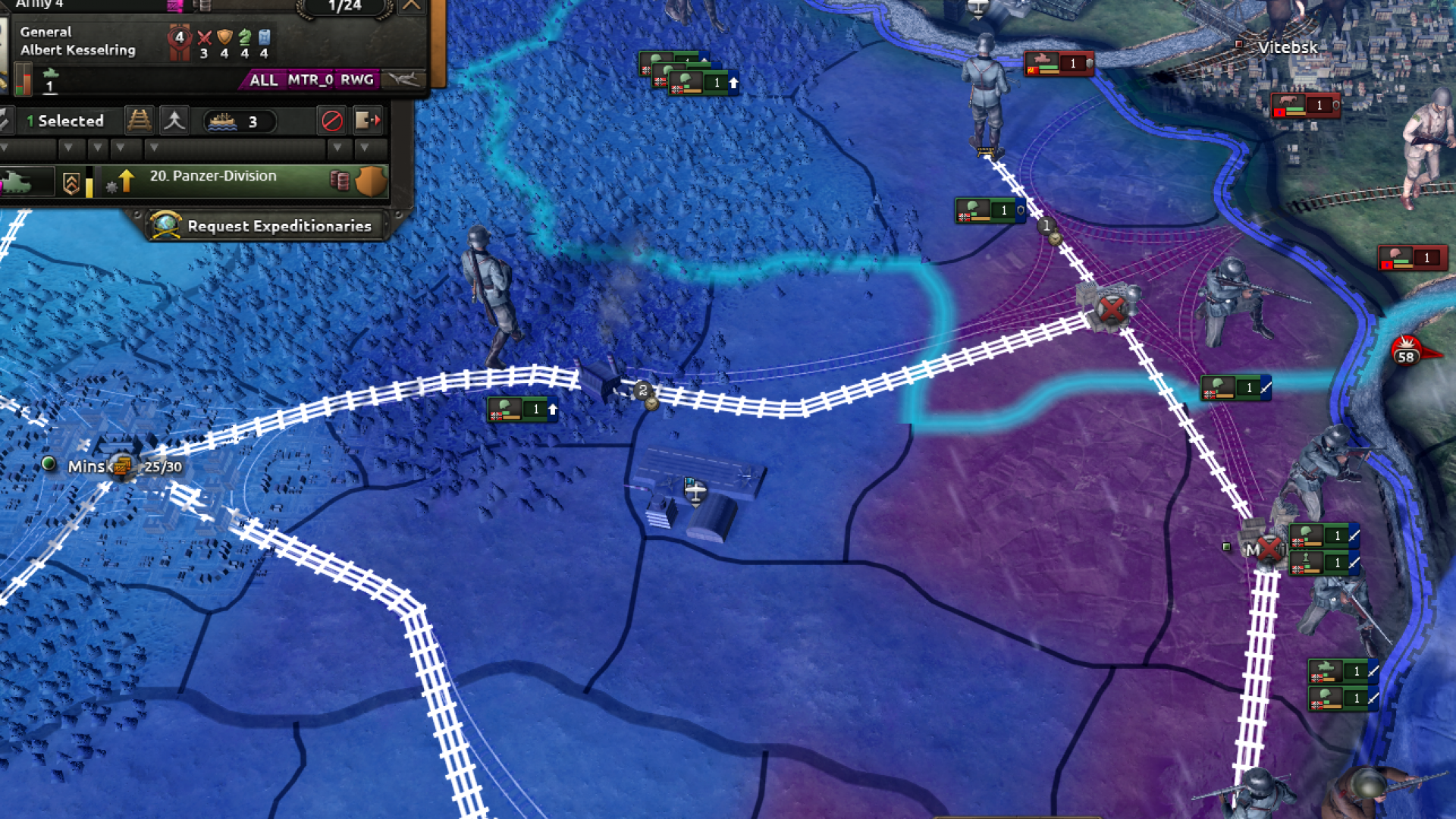 Greetings all, and welcome to today’s dev diary on the huge supply system update coming with the Barbarossa update. Before we begin, I’ll leave a heads up that this will be the last dev diary before we break for summer, so don’t expect anything new until some time in August at the earliest.

Since we last talked about supply, a few things have changed. We found that the way truck need could take off and spike was hard to deal with and that watching out so you didn't overload individual supply hubs was a bit too intensive. We also felt that the way the mapmode worked made it very difficult to project how well supply was flowing.

The iteration we have now aims at addressing these shortcomings. It's now possible for divisions to supply from multiple hubs. Trucks are now less of a strict necessity, rather something you can assign to hubs to make sure they can project supplies further away. Finally, the mapmode has changed to better show the spread of supply as well as current status for divisions.

From each hub connected back to the capital, potential supply is projected outwards - adding up when overlapping. This is represented by the brighter colors below. For each province in distance that supply needs to travel from a hub, there is a reduction in the amount as some is lost. The amount depends on various factors like terrain, crossing rivers etc. The dark purple areas below are reduced to local supply only, and the highlighted red-orange areas indicate locations where there are units suffering from significant supply issues. 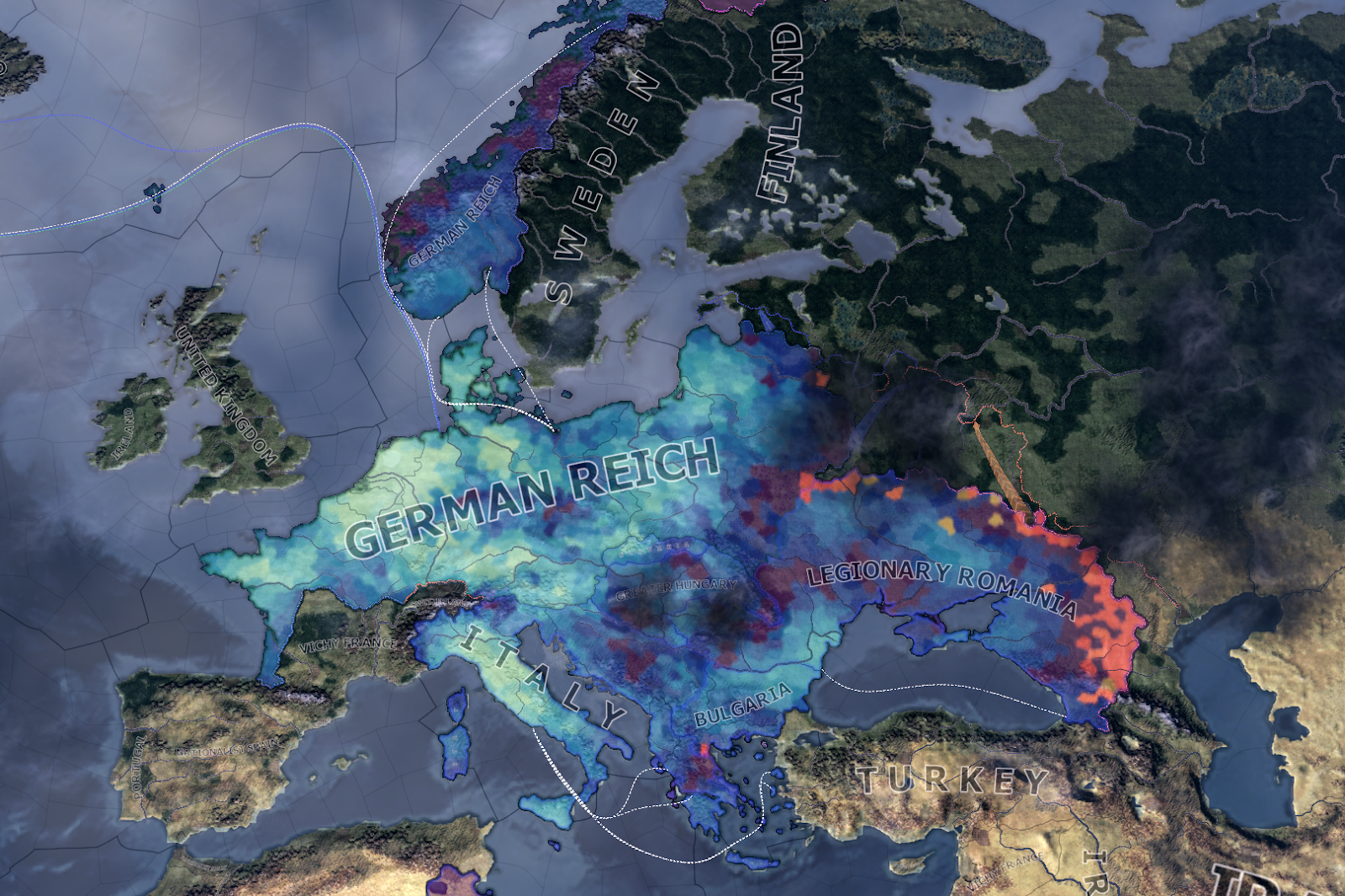 In the picture above, the Ukraine/Caucasus front is mainly struggling because it is overextending before the captured rails have been converted, so a lot of the rail network there is not operating. When a railway is taken over there is a longer cooldown when it gets converted for use by you (representing a combination of repaired damage, gauge-alteration, and general maintenance), and without connected hubs supply won’t flow.

How much you can output from each hub depends on the level of railways leading back to the supply capital, and the total max there depends on your industrial base (so Luxemburg can not feed as many as soviet union, for example). 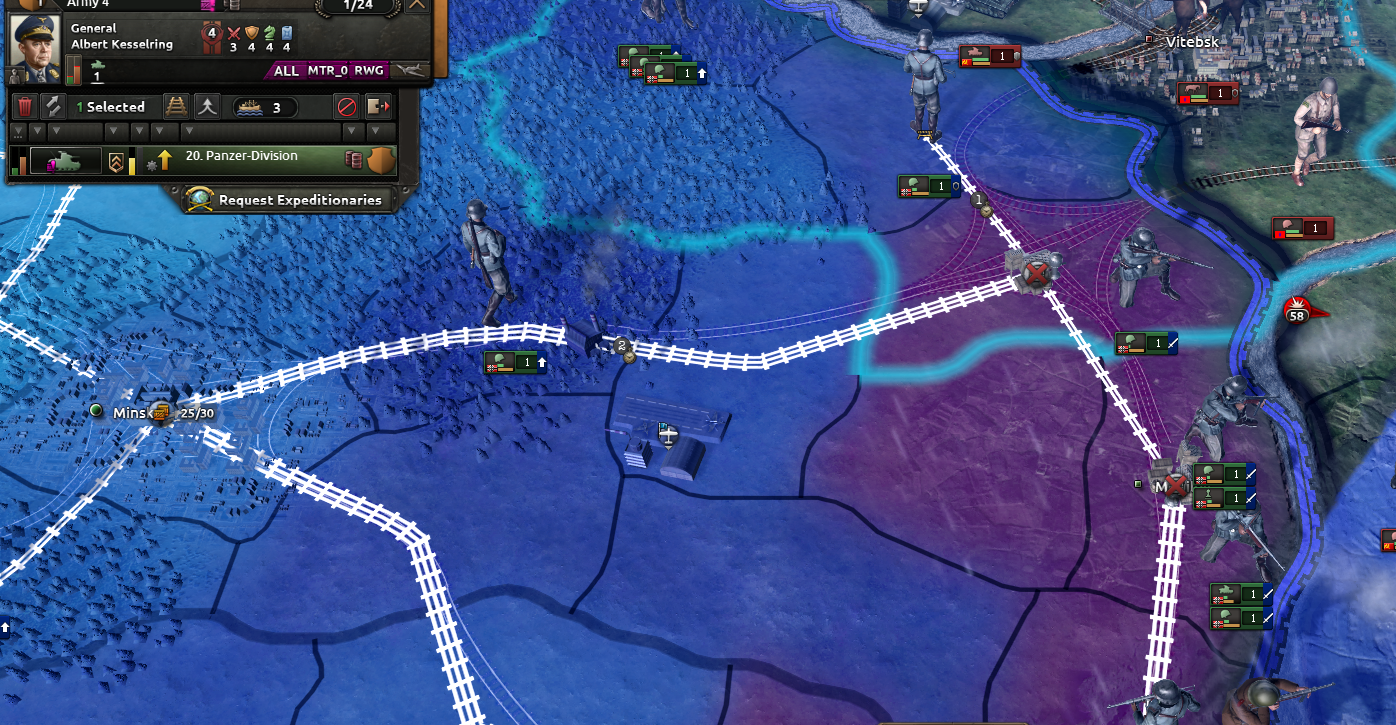 Here, the clock indicates rails that are not yet converted, and the hub icons with red crosses indicate that they do not connect back to your network.

To increase the range of a hub (perhaps to help supply the front above better) you can choose to improve the motorization level. The horse icon on the right indicates no motorized supply from the node, but you can opt to toggle it to a higher state of motorization. Be careful, as this will cost you trucks which are taken from the stockpile. 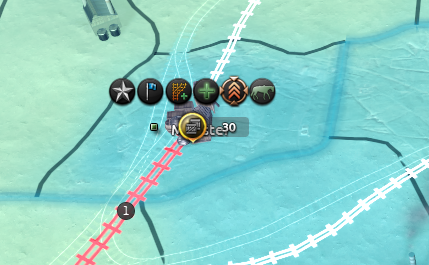 It is also possible to set the motorization level on an army, in which case it will automatically toggle on motorization for hubs that it uses without requiring further interaction from the player.

There are also some other options on a hub. The star icon lets you move your supply capital to a new location, provided that you have sufficient surrender progress. This lets you get around issues where your capital ends up cut off or surrounded, but also comes with a period of bad supply as the new location is prepared.

The blue flag next to it lets you control allied access to the node. This can be a great way to flag to an AI that you do not want them on your front, or to stop them from joining a tight landing situation.

The rail icon lets you quickly switch to construction mode and extend rails from there while the green plus will automatically queue up construction for rails to combat any bottlenecks your node may suffer from back towards the capital. The chevron icon lets you prioritize train allocation if you are running low.

As part of No Step Back, we’re introducing a new dimension to naval invasions. Floating, or ‘Mulberry’ harbors can now be constructed once the appropriate research has been completed.

These weighty and expensive pieces of infrastructure (don’t look too close at the numbers above hehe) aren’t intended for every-day landings, but are instead intended to represent the equipment used in large-scale operations such as the Battle of Normandy. 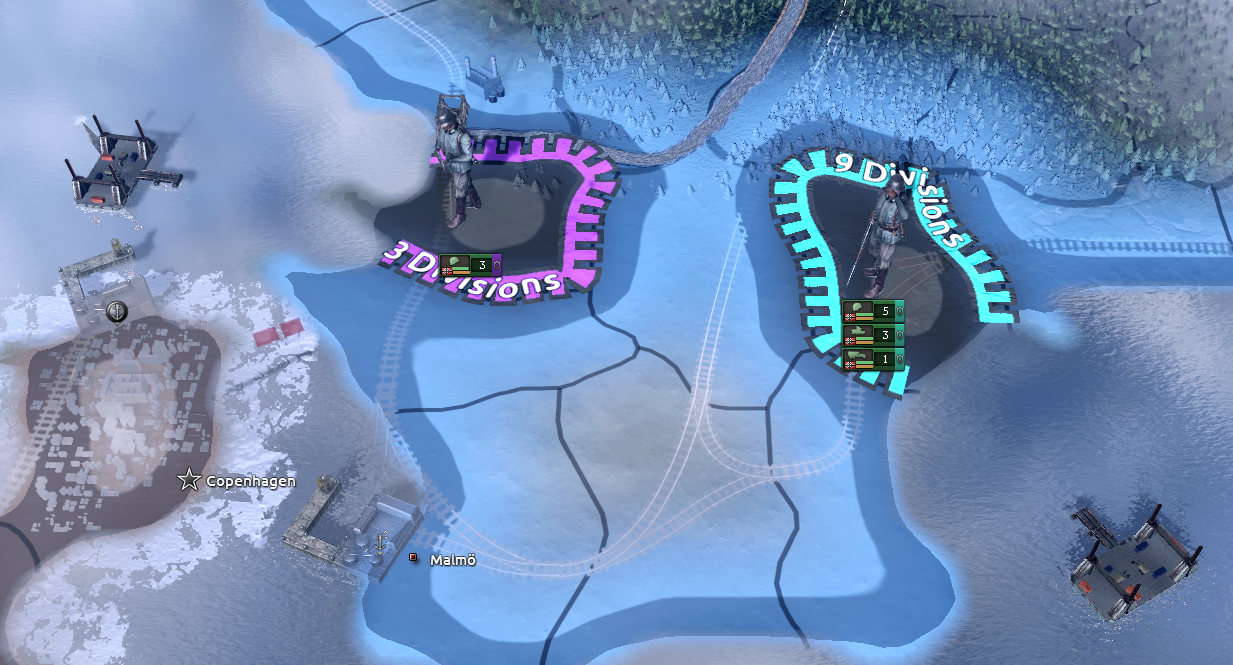 Naval invasions utilizing a floating harbor will be represented by harbor apparatus placed parallel province targeted by the invasion, and will immediately create a stocked supply hub at their location: 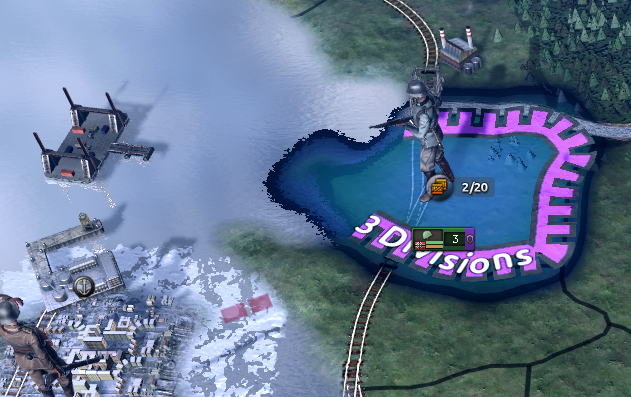 Used carefully, one or more mulberry harbors can keep a sizable invading force supplied without requiring the immediate capture of an important enemy harbor. Of course, harbors should remain amongst the first targets of any successful invasion, and the supply hubs created by a floating harbor will be temporary; lasting a matter of weeks or months, depending on the strength of enemy air superiority and other factors.

Of course, there is yet more to cover regarding supply, and we'll have another diary on this subject in the future, but I hope you like what you've seen so far and we’ll be seeing you again after summer!

Oh, and one last thing - one of the new loading screens for NSB is this awesome Polish cavalry, so we figured we should share it as a summer wallpaper for you (fear not, there will be a soviet one eventually!) 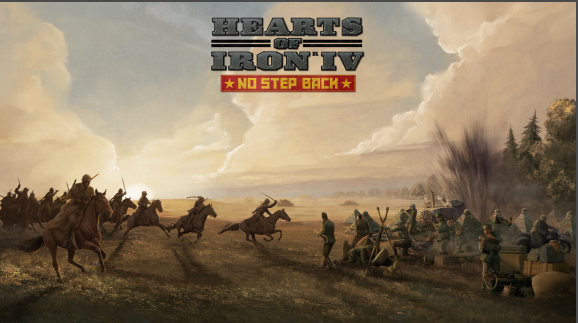 The vision behind the painting was to present a more historically accurate depiction of the Charge at Krojanty. This was an engagement in the opening days of WW2, where the elite Polish cavalry surprised a German infantry unit at rest, charged before it could prepare for defense, and dispersed it. They later withdrew when faced with German armored cars.

This battle is famous because it started the, often officially repeated, ahistorical view of Polish cavalry charging German tanks and we wanted to try and make something more accurate (ignore the backdrop. we couldn't resist an epic sunrise on a field, but I hope the feel is there).

We have attached 3 different aspect ration wallpapers for you, and we can't let this opportunity go without a shoutout to @CreamGene our talented 2D artist responsible for this artwork.

Well, I seem to have been lucky on my timing checking the forums today! Let's see what we have here...
Toggle signature
Hello there!
Reactions:

SHUT UP AND TAKE MY MONEY!
Reactions:

With supply trucks now a buildable thing, can they also be destroyed? I recall one of the great impacts aircraft had during the war was in destroying soft targets like supply vehicles.

Good to see Mulberry harbours - hopefully this will make landings a little less "all or nothing".
Reactions:

Does motorization use fuel passively?
Toggle signature
I am therefore officially rooting for a Franco-German strike on Russia, prompting the Soviets to strike back with their hitherto secret nukes. This will serve as a salutary lesson to all involved and leave everyone suitably chastened.-El Pip

Well, this is going to be tough to spend a whole month without diaries! At least when you guys come back I believe we should expect to see the diary regarding the rework of a really big country that has a red flag, uh?
Toggle signature
I'm a human like everyone else, also brazilian! Always be polite, try to spread your message without violence.
Reactions:
D

Why is supply in Lowlands better than in Berlin?
Reactions:
T

Those little icons on the supply hubs, to turn away allies, to prioritise, and to switch between trucks and horses, made me irrationally happy.

And we finally get Mulberry harbours!
Reactions:

With the conversion of rails feature, is the length of conversion modable?
For example to have very short conversion time in a Civil War or quite short times if overtaking a country with the same rail gauge atleast.
Reactions:

No dev diary till August? Wake me up when July ends.
Reactions:

Arheo said:
The blue flag next to it lets you control allied access to the node. This can be a great way to flag to an AI that you do not want them on your front, or to stop them from joining a tight landing situation.
Click to expand...

Easily the best part of the dev diary. The problem of allied divisions hogging all the supply on a front has plagued the game for as long as I can remember, I'm sure many people will be happy to see it fixed.
Toggle signature
Hello there!
Reactions:

So, any news about the release date? Can we expect it in 2021? Or it seems to be that 2022 is more possible
Reactions:

Arheo said:
The vision behind the painting was to present a more historically accurate depiction of the Charge at Krojanty. This was an engagement in the opening days of WW2, where the elite Polish cavalry surprised a German infantry unit at rest, charged before it could prepare for defense, and dispersed it. They later withdrew when faced with German armored cars.
This battle is famous because it started the, often officially repeated, ahistorical view of Polish cavalry charging German tanks and we wanted to try and make something more accurate (ignore the backdrop. we couldn't resist an epic sunrise on a field, but I hope the feel is there).
Click to expand...

Arheo said:
The blue flag next to it lets you control allied access to the node. This can be a great way to flag to an AI that you do not want them on your front, or to stop them from joining a tight landing situation.
Click to expand...

This little feature alone should make a huge difference on many fronts.
Reactions:

We are one Step closer to DLC and oh boi it's getting hot here.
Reactions:

Very exiting that you'll give us the possibility to decrease allied supply overstacking.
I hope the AI will get better at supply management in general, but this way we can at least prevent the worst.
Reactions:

There have been times where I’ve been skeptical of HoI4’s future, but pretty much every developer diary for “No Step Back” has demonstrated a huge step forward. I’m really looking forward to this stuff (if not the massive work of converting KR content ), and I think this’ll end up being the game’s most impactful update yet.