Jump to latest Follow Reply
Menu
Install the app
You are using an out of date browser. It may not display this or other websites correctly.
You should upgrade or use an alternative browser.
Hearts of Iron IV 41222 Bug Reports 12125 After Action Reports (AAR)
Previous dev diary Next dev diary
Show only dev responses

Hello! I’ve been drafted from EU4 to fight in the trenches together with the HOI4 team for a month and give some support on AI and performance. So I’m here to talk about those.

I’ve been mostly devoting my time into improving garrison orders to solve some really wonky cases that could happen. Like it placing two units on Magdeburg instead of Berlin letting the capital be completely exposed. But also focused on making the garrison work a lot better when you don’t have enough troops to cover every point in the order that needs it.

First I implemented a new tool for HOI4 to let us programmers visually inspect what the unit controller is up to. 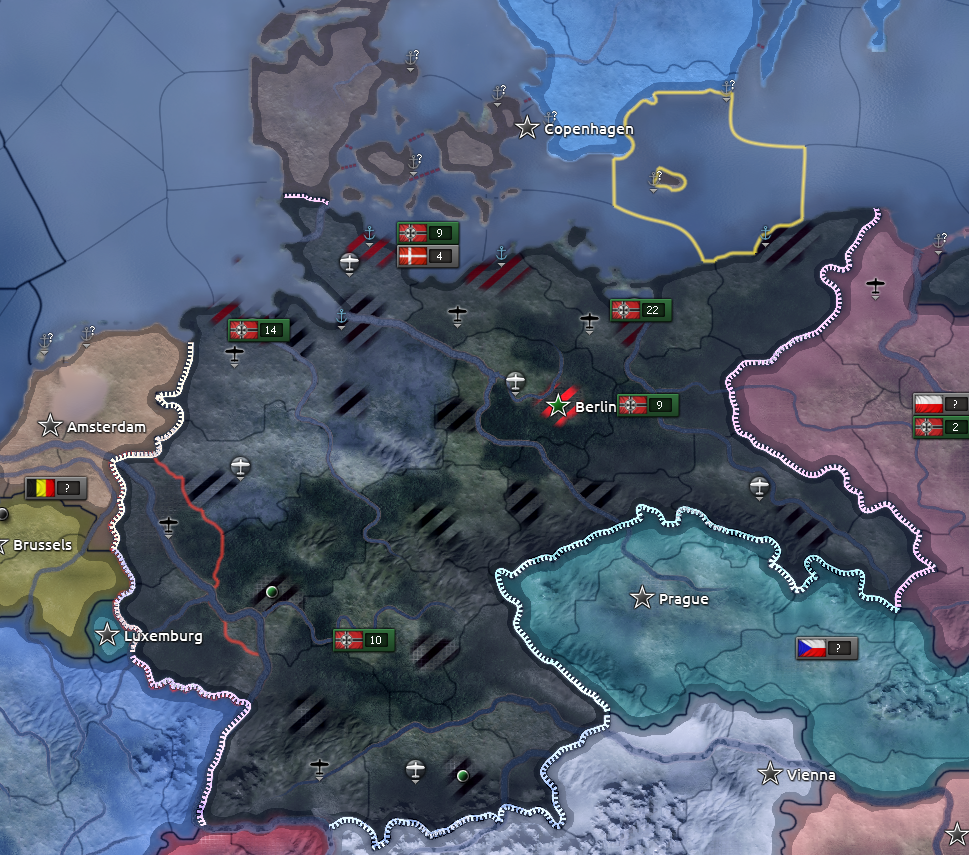 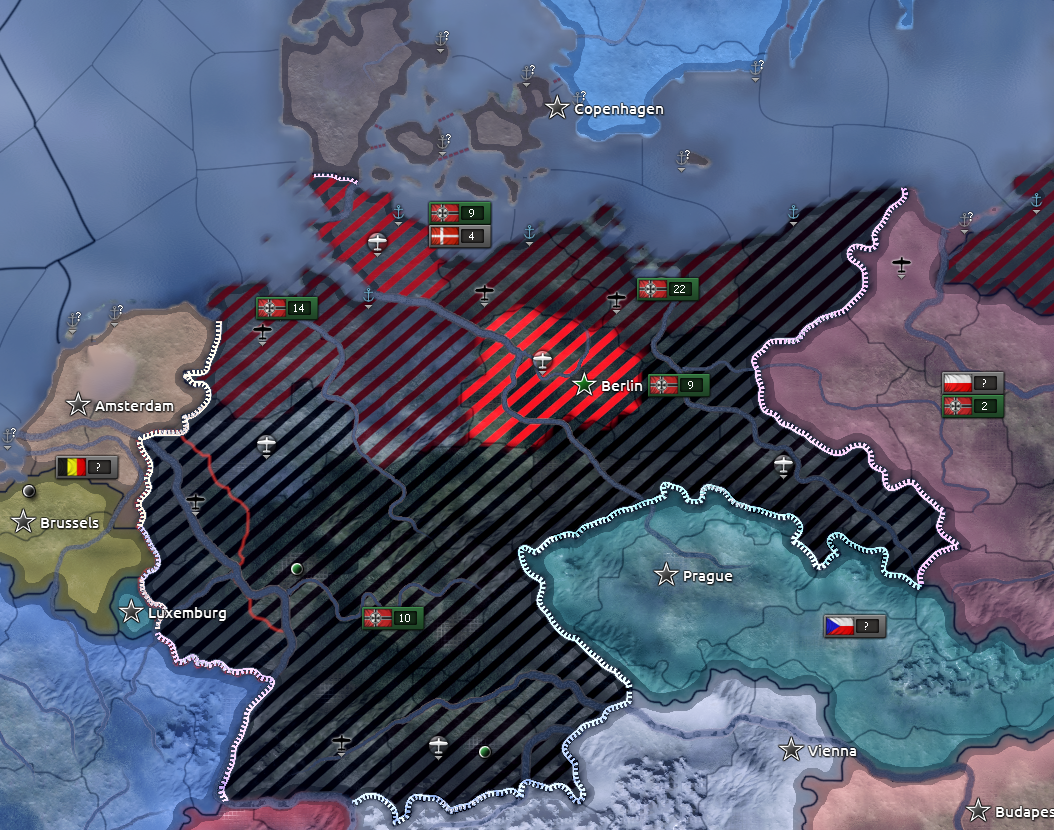 After that came the big task, rewriting garrison order and how it assigns units. There’s been a lot of issues here and you’ve probably experienced them from time to time. Shuffling, units prioritizing the wrong states or provinces, the list goes on.

So what did I do that is new. Instead of having the old logic setting up rules for where units should go I went with a thing I hate. Mathematics. The main difference is that each state will sort of calculate how “painful” it is to remove a unit from it now. This means as each state goes through this, they will be trying to find the least painful way to perform the garrison order and will eventually settle on a sort of equilibrium.

It’s given us a lot easier way to control where units should go in a garrison and where they end up will match a lot more in style of the weights you can see on the pictures above.


A thing that we have been planning to do for a long time and finally got around to is to allow a more flexible way to control how the AI plays. We use a system we call “Ai Strategic Plans” for this. Its essentially telling Ai to act a certain way when it comes to national focuses and priorities based on scripted conditions. To put that in english I am going to hand over to @Bratyn for some examples:

Some situations in which the new Strategy Plans have been useful is to ensure ‘compatible’ AI behaviour in the case of an ahistorical Germany. A lot of the AI behaviours for the major European powers has been based on the assumption that Germany remains fascist and causes mayhem in Europe. This means that AI Italy would usually see Germany as an ally, and that AI France would either always go with the United Kingdom (if historic mode was turned on), or be so unpredictable that it was problematic for planning out and predicting alternate history scenarios.

Using strategy plans, we have made these AI nations partly behave more logical to the changing world scene, and partly ensure that the player will always have a challenging playthrough. Going democratic Germany, only to get your only enemy (Soviet Union) end up at war with both the Allies and yourself, is not a very fulfilling playthrough. Instead, a new strategy plan will now load for France upon German completion of the “Oppose Hitler” focus. This delays their pick of which political direction to head into until we have more information from the German player, essentially a ‘holding pattern’.

We also used AI strategy plans to teach the Chinese AI how to handle the Inflation mechanic and do things like making the PRC AI keep the peace in China when they are going for the peaceful takeover through the political struggle. All in all, to myself and @Archangel85, this has been (and will continue to be) an invaluable tool for ensuring believable and, most importantly, fun playthroughs for each ahistorical path that one can take. We hope to continue building upon this basis and make nations ‘smarter’ in dealing with alternate history situations, or just general oddities that arise in the state of the world over the course of a playthrough.

Modders I am sure are going to like this a lot, so for you guys check out the example below for how it can be set up (regular humans without modding superpowers can safely ignore ). 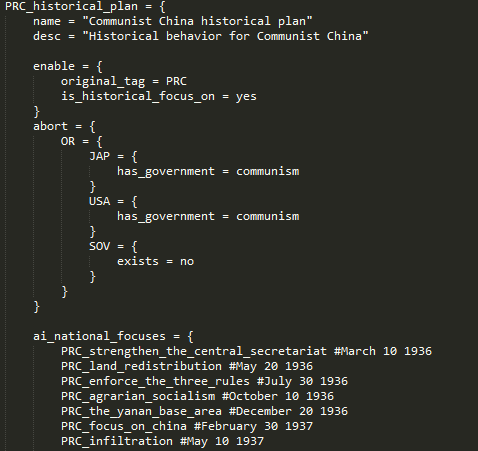 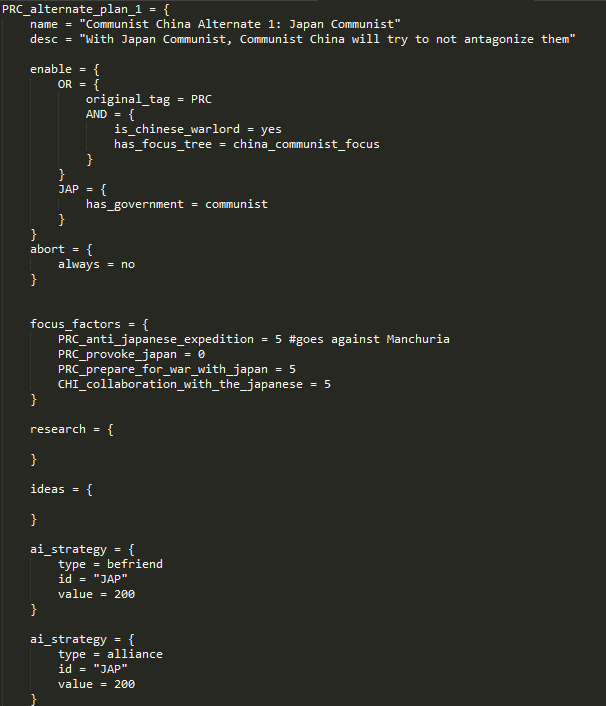 Late game performance have always been a tough nut to crack for us on our games. For Cornflakes we rolled up our sleeves and got elbow deep into the code to improve it the best we could.

In order to measure performance and see where it goes bad to better pinpoint what causes the slowdown I write a little script that generates this super sexy graph for us. 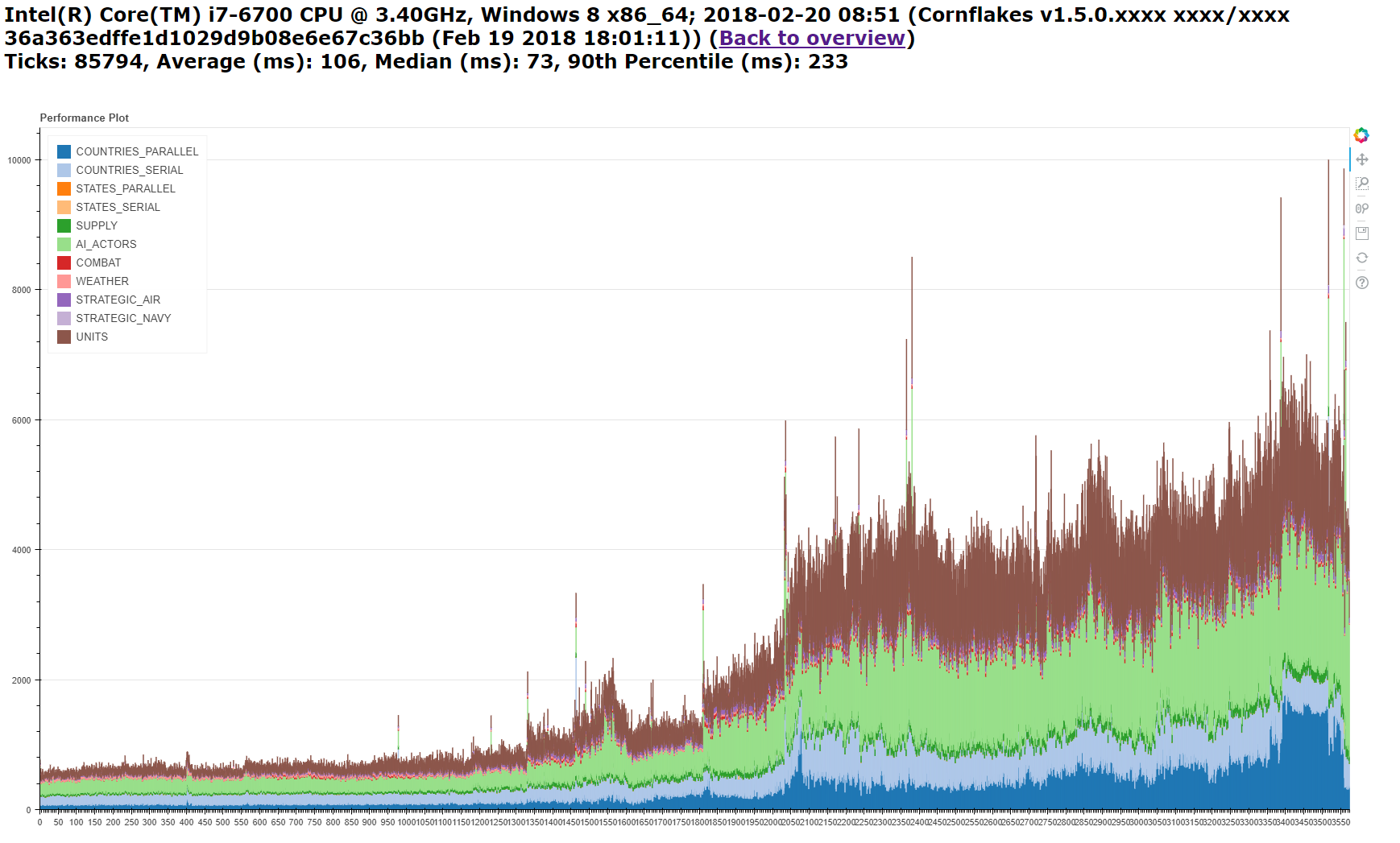 We did tons of neat little tricks to improve our performance. AI when it micromanages does a lot less pathfinding now. The game will automatically balance workload between cores depending on how long the hourly update took for a country, The fronts system has been a lot more streamlined to make it not hog performance

And we’ve done quite A good job at it as well. Here’s the result of our hard work just this week 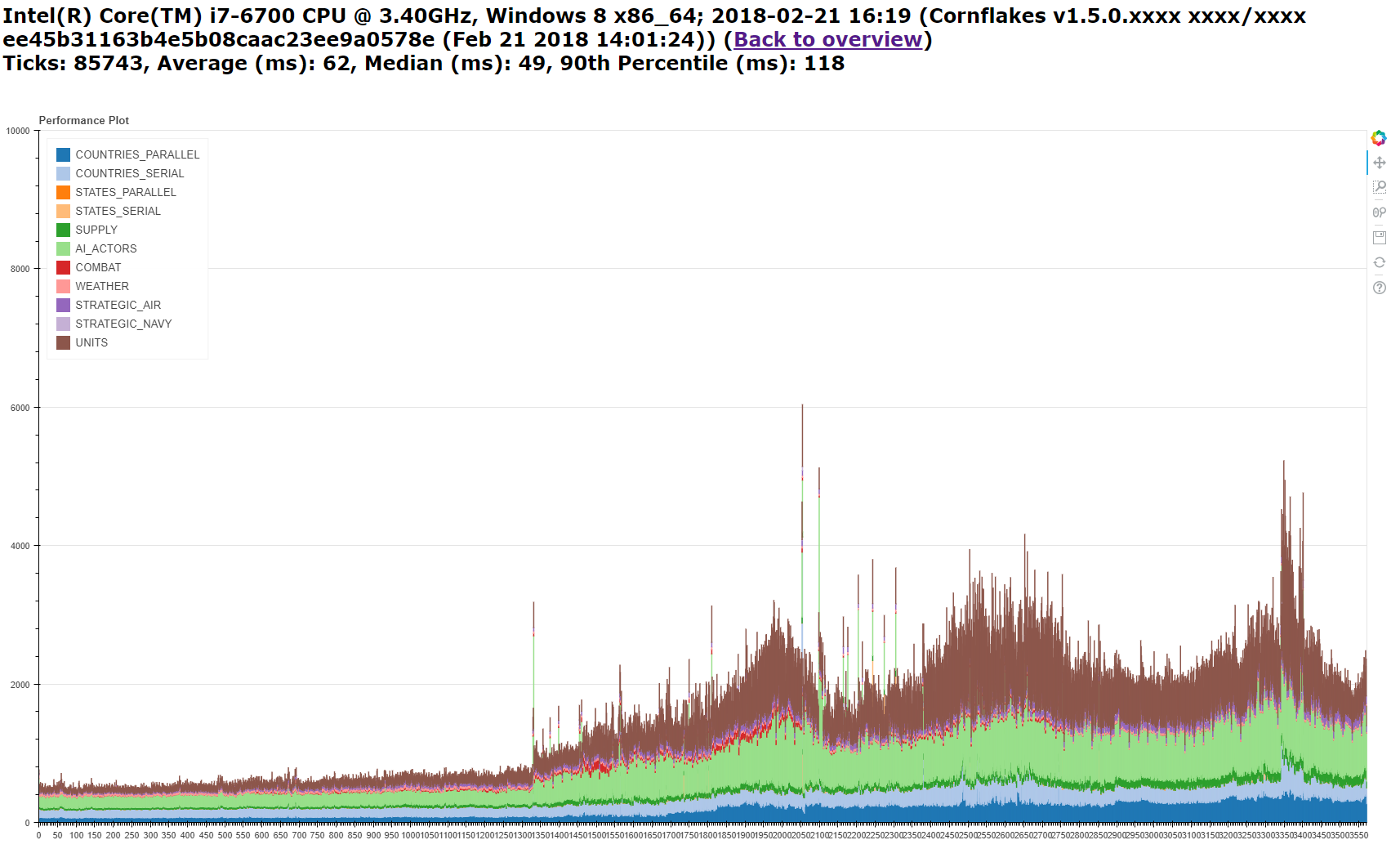 Between finding ways to make things more efficient and utilizing the cores on the CPU better we’ve gotten an overall improvement late game. We won’t rest there though, there’s tons more that we can do to make late game an even more enjoyable experience!

To conclude this Dev Diary, we have a reminder for you. Tune in for the first day of the Three Day War later tonight, 20:00 until 22:00 CET. Since the release of Waking the Tiger is approaching we have invited some of the grandest streamers to battle it out in multiplayer and show off the expansion as well as put the build to the test.


Quill18, Alex the Rambler, Marbozir, Enter Elysium, Solar Gamer, Spiffing Brit, Drew Durnil, The Prussian Prince, Bratyn, Da9L, Shen Plays and Jay’s Gaming will all be streaming their point of view in their own channels, and we’ll be hosting a main observer stream at the Paradox Twitch channel: https://www.twitch.tv/paradoxinteractive

Next week we are going to try and do a big recap of all the features and changes and also talked about a bunch of small stuff that hasn't fit into diaries so far. See you then!

Just to clarify, I don't know what choice the AI opponents use (not sure how to see that as a player), but it continues large-scale attacks even when the equipment (brown bar) is depleted and there is none in storage. In contrast to morale and supplies, this cannot be addressed at the combat level as it requires production of new hardware. That is why I suggested that it should be a global parameter that the AI could "see." Lowering the aggression overall against human players, or making it a personality trait, could be a good idea - but it would not address the specific issue mentioned above.

Im glad you guys are looking to fix the performance issues. Ive sometimes stopped playing the game because of the intense lag. But this is great and i cant wait for Cornflakes

pnt said:
That is why I suggested that it should be a global parameter that the AI could "see."
Click to expand...

This metric of "seeing" the amount of equipment nations have could be useful in other ways, too.

The advantage of perceiving the amount of equipment for an A.I. nation include:
What other advantages or disadvantages can you think of regarding the A.I. keeping track of its equipment inventory information?
Toggle signature
Vote for suggestion: Remove "random state" infrastructure rewards from focuses and allow us to place the reward upgrades manually
Vary the appearance of icons in HoI4 in order to depict unit strength
Describe what words or phrases introduce confusion or ambiguity in HoI4.
Revealed: Raj's historical unit structure in 1936 (proposed historical templates)
History: Real Life RAJ was producing Basic Artillery (18 pounder) and Tier I Anti-aircraft guns (3" AA) in 1938 and probably 1936.
C

All these changes are AMAZING, especially this one, but the other ones may complicate the game a little more than it should, don't you think? They're really useful, sure, but they're a little TOO hard to manage. I'm all for the division namelists, infrastructure and resources, acclimation and army groups/leader traits, but the whole stability and war support thing is a bit too much to handle for a game like this since you already have a lot to do during wartime. Just my opinion though, it won't drive me from the game, it will just make the game slower and I won't be able to play as much.
K

Performance? Well, do you have any plans to use DX11, DX12 or Vulkan?
The game at pause, some close zoom levels give me only 29-30 fps. My rig could handle three times that...

pnt said:
Fortunately, "seeing combat" is not really needed in this case. The AI only needs to see the amount of equipment in storage (perhaps comparing it to the average losses and production numbers, the net for which is calculated anyway), and then set a flag about how offensive it should be. The levels for how aggressively plans should be pursued are already pre-set for the player when using the AI, so I assume the AI uses a similar system. The "equipment inventory level," and perhaps remaining manpower, could simply be one of the factors for determining this.
Click to expand...

This is exacly the problem, in fact this breaks the AI! It can work in some specific cases, but it will fail fataly. What if the terrain modifier is -100%? What if the ai has a full storage of very bad equipment and very bad templates?

We all know what happens:

And FYI it doesn't work at all as you suggested, it uses average strength, average org levels and plan score for an army to determine wether to activate the plan or not. But the result and underlying wrong assumption is the same.
Toggle signature
Creator of Total War mod.

stjern said:
And FYI it doesn't work at all as you suggested, it uses average strength, average org levels and plan score for an army to determine wether to activate the plan or not. But the result and underlying wrong assumption is the same.
Click to expand...

I have loaded up games and taken a look at AI germany and italy to try to get a sense for what they are doing. I have taken actions to manually halt their suicide offensives, let the game play 1 hour, then loaded back up my country. The AI immediately resumes the suicide offensives. I haven't manually broken the AI army groups into smaller groups and completed testing. Maybe someone can share if they have. This would help answer whether or not there is currently a formulae.
C

Please bring these optimizations to EU4, it is BADLY needed. Stellaris less so.

Why is the performance worse now that Waking the Tiger is out? I don't understand. Please explain what might be going on?
Toggle signature
Check out my Alternate History Mod!

In the battle between freedom and tyranny, tyranny has won. America and Britain soon fall to radical socialists, India falls into civil war, and the few pockets of democracy left in the world struggle to hold themselves together, as the Reaper of War comes to sow its reward in the snows of Zealandia...
Show hidden low quality content
You must log in or register to reply here.
Share:
Facebook Twitter Reddit Tumblr WhatsApp Share Link
Top Bottom