Jump to latest Follow Reply
Menu
Install the app
You are using an out of date browser. It may not display this or other websites correctly.
You should upgrade or use an alternative browser.
Hearts of Iron IV 37688 After Action Reports (AAR)
Previous dev diary Next dev diary
Show only dev responses

Hi everyone, today it's time to continue talking about espionage. We will be covering the stars and main resource - the Operatives.

Operatives are a new character type just like Admirals and Generals. But instead of leading armies of fleets they are used for 3 things. Defence of the homeland against foreign operatives, Missions and Operations (topic of its own diary).

Recruitment
Operatives are recruited from you Agency. The max amount you can have is dependent on the number of agency upgrades you have as well as if you are spy master or not. A spy master get access to a lot more operatives, depending on the size of their faction. A non spy master can still do things, but is a lot more limited due to this. 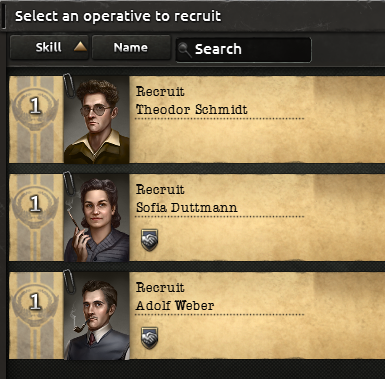 Operatives start as recruits but can become full agents by gaining experience which will improve their abilities. There are various traits that can be gained when active as well as being possible from the start. Some are acquired from upgrades such as commando training in the agency. Sadly I didn't have art ready for traits, but here are a few examples we have:
Tough - will give up less intel if captured
Natural Orator - increased ability when it comes to diplomatic missions and creating collaboration regimes
Seducer - bonuses to missions and operations that require a soft touch (or whatever the enemy may be into)
Commando - bonuses to operations that require combat or stealthy infiltration
Double Agent - a turned enemy agent will have bonuses to operate in their country of origin
Master Interrogator - Increases the capture chance of enemy operatives when working on counter intelligence.
As well as a bunch of other....

Operatives also have (at least one) nationality and will have a bonus to operating in their homeland. The Agency has some upgrades like Localized Training Centers that increases the chance of picking up agents that can pass as locals in foreign (including you enemies) nationalities. This is a mechanic that will be benefiting the Allies as operatives from German occupied areas can be recruited and sent back on missions where they will blend in easily.

Missions
Operatives can perform various missions on the map. The strength and impact of a mission generally depends on the size and strength of a network (more on those below).

Build Network - The Operative will build a network of contacts in an area. Several operatives can help out either to expand the reach of the network or to build it faster. Networks have various passive effects:
Networks target cities (VPs of particular size) and spread over an area. They can link up multiple operative's networks into larger ones. Here is an example of the British agents cooperating vs a single operative 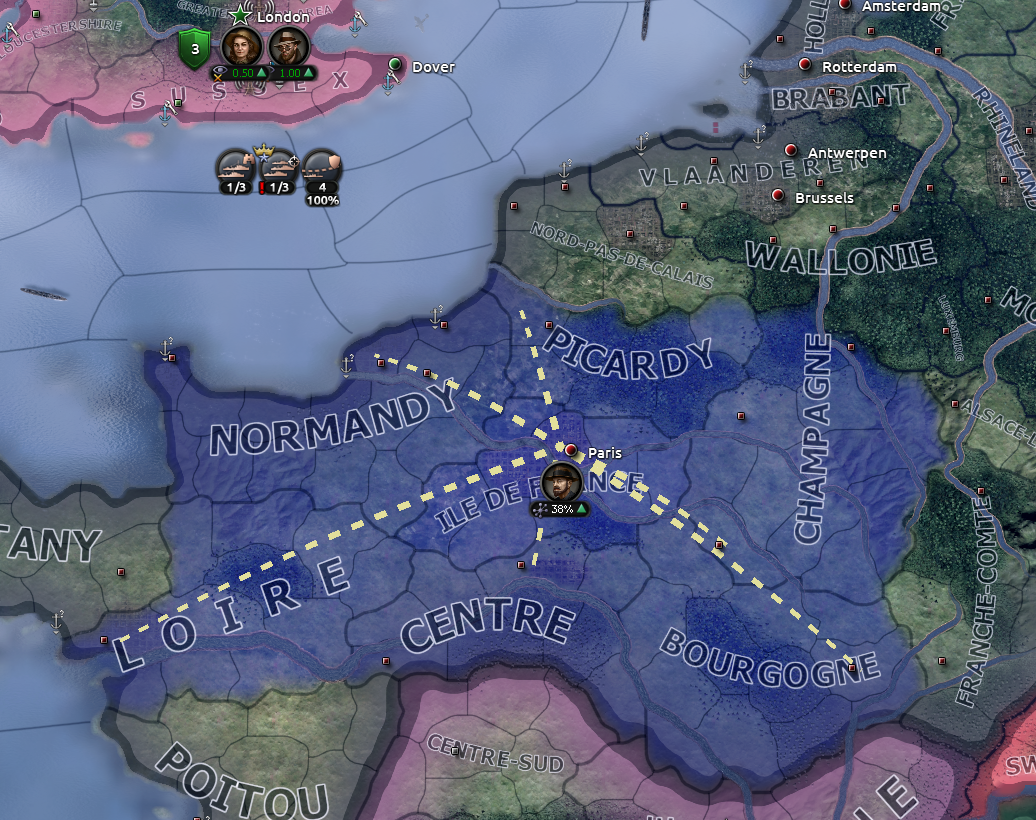 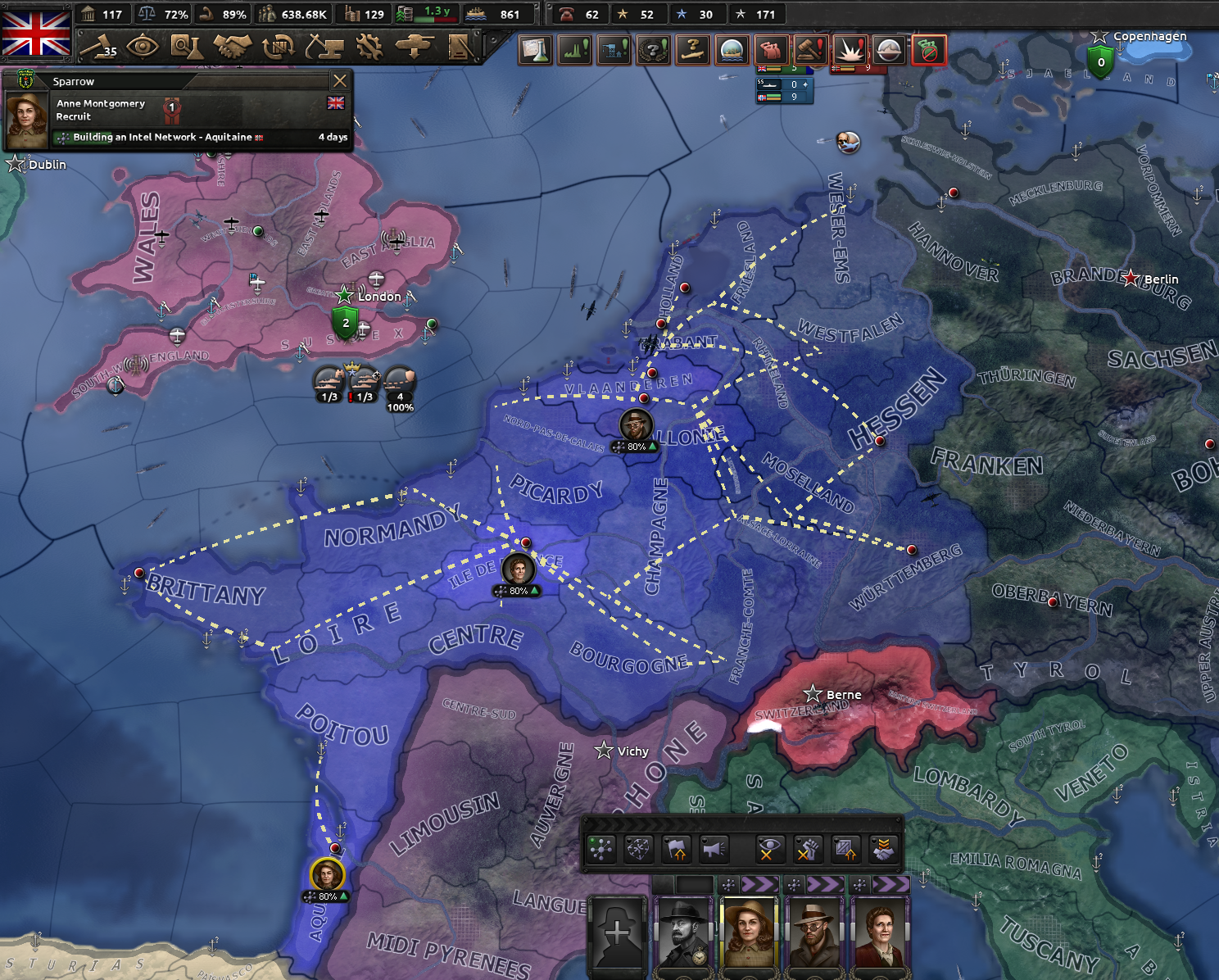 Here you can also notice "Sparrow" as the selected operative. Operatives have codenames of course (I had a lot of fun picking out swedish codenames)...

Quiet Network - If you do not plan to make use a network right away you can place it in quiet mode. It will no longer give effects, but risk that any of your operatives are caught is now very tiny while still maintaining it. Perfect if you have prepared a large network for a future invasion, for example.

Control Trade - Influence trade opinion by boosting yours and reducing enemies to give you a bigger piece of the the resources up for trade. If multiple nations are involved they cancel each other out, but it still limit 3rd parties.

Diplomatic Pressure - Makes AI to want to accept only your faction, requires human players to have a higher tension/opinion level for joining other factions. If multiple nation’s Operatives are involved they cancel each other out, but it still limit 3rd parties. This can be pretty neat if you are competing with AI nations over where you want someone to join, as well as in multiplayer.

Defense
Operatives on counter-intelligence as mentioned above will help defend your nation together with the agencies base counter-intel value. 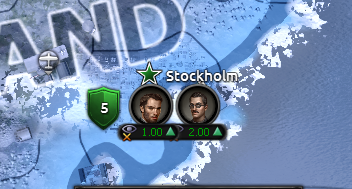 This value affects how easily enemy agents can be discovered and stopped as well as how difficult it is to perform operations in your nation (see future diary). In this example there is a base value of 2 and the operatives add 3 together for a total of 5.

When an operative is discovered several things can happen:
Forced Underground or Injured - The operative had to abandon their work and lay low to avoid being captured. Any mission including networks will be on hold during this and networks will start to decay if no other agent is there
Captured - An operative captured by the enemy will be leaking intelligence to them and will eventually be killed (unless rescued). Operatives assigned suicide pills can also minimize the intel leaks here. Operatives who are caught also have a direct impact on their network as people working with them are assumed to have been captured along with them. 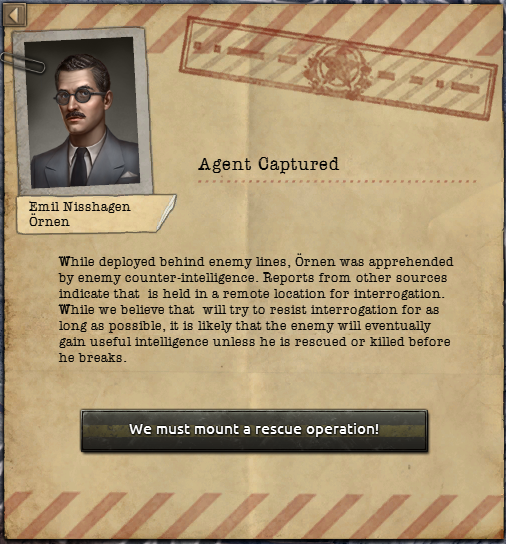 Killed - In rare cases operatives may be killed in action leaving one of your slots empty where you will need to recruit a replacement.

The defensive game is mostly a passive affair for the defender as we were cautious of creating required micro, and by having a solid defense and capturing enemy operatives you might actually benefit a bit from the intel gathered on your enemies.

Thats it for this week. See you again next week!

I want a School of Love where I can make my agents the ultimate seducers.

I think spy-master mechanic is a bad choise. Change my mind.
(I hate when game gets designed with multiplayer in mind)

TheDeathIncarnate said:
I think spy-master mechanic is a bad choise. Change my mind.
(I hate when game gets designed with multiplayer in mind)
Click to expand...

well in single player you can just be spymaster?
Toggle signature
Reject reason to make the impossible possible!

Disappointed to not have any [REDACTED] or [DATA EXPUNGED] as rejected titles
Toggle signature
Dr. Klen'Moral Observations on the effects of isolation on Hive-Minded drones - A Stellaris scientific report

Are networks independent of province control? Eg if i build a network in denmark, will it still be there if annexed by Germany?

podcat said:
well in single player you can just be spymaster?
Click to expand...

yea but why can't everyone use that options instead of only spy-masters ?
,

Can the Germans set up an England Spiel?

Its time to blast saboteurs.

is it possible to donate maybe 1 or 2 civilian factories to helping increase defensiveness? As if the country were producing the propaganda posters like the "Keep mum - she's not so dumb" ones, or maybe an occupying power publishing newspapers as propaganda?

Besides the traits presented in this diary, are agent also affected by personal traits like Reckless or Politically connected?

Question: How will the Governmetn-in-Exile system and legitimacy interact with intel agencies, if at all?

Looks VERY interesting - also I wonder how easily you can send them on a mission / get them out from that mission.

A German agent infiltrating Czechoslovakia should be able to easily cross the border and blend in (at least in territories where there was a significant German minority) and easily get out.

A British SOE section F agent would get relatively easily in, getting out would either require time (via Spain) or some special mission (via a Lysander).

German infiltration of the US should take much more time (would need to be inserted via submarine).

You get the idea of where I am going.

Oahkoah said:
I want a School of Love where I can make my agents the ultimate seducers.
Click to expand...

Great Dev Diary! I'm going to assume that recruiting Operatives costs PP? If so, does the cost increase like Generals and Admirals?
Toggle signature
Hearts of Iron IV:
Also Check out my Suggestion to Fix the US Presidency in HOI4
Expanded News Events
Greek Political Parties Suggestions
Byzantine Emperor Suggestions

Control trade, yes much things related to trade. please add a flat modifier for the amount of civs when sell resources (to modify the free trade price fur for example) and when you by (to modify something as depression ideas) also very useful for modding, there is anything similar but it point counties so you can use this modifier in this way
Toggle signature
I was a TGC modder. Cartographer, celeste.

TheDeathIncarnate said:
yea but why can't everyone use that options instead of only spy-masters ?
,
Click to expand...

Uh it was stated few dev diaries ago that everyone can access the same espionage options, but spymasters receive more operatives and some other buffs.

Can we take a moment to appreciate the new top-bar? It's awesome.